A Hanging in 18th Century England

Posted on 8th January 2021
With more than 200 criminal offences on the Statute Book that carried the death penalty and few qualms on the part of the Justices in passing such sentences public hanging was a regular occurrence in 18th century England. Indeed, they provided the opportunity for a great social gathering which was readily taken with alcohol available, food sold, fairground attractions and much revelry Notice of executions were posted well in advance to allow people to arrange excursions with multiple hangings and the execution of Highwaymen, the folk heroes of their day particularly popular. More than 200,000 people attended the hanging of the notorious multi-escapee Jack Shepherd. Indeed, such was the love of the English people for an execution that it often left foreign visitors bemused. Here a Frenchman in London on business describes the process:
Criminals are not executed immediately after their trial, as they are abroad, but are given several days to prepare for death. During that time they may ask for anything that they require either for the soul or for the body. The chaplain of the prison (for there is one) does not leave them, and offers every consolation in his power. The day before the execution those who desire it may receive the sacrament, provided the chaplain thinks that they have sincerely repented and are worthy of it. 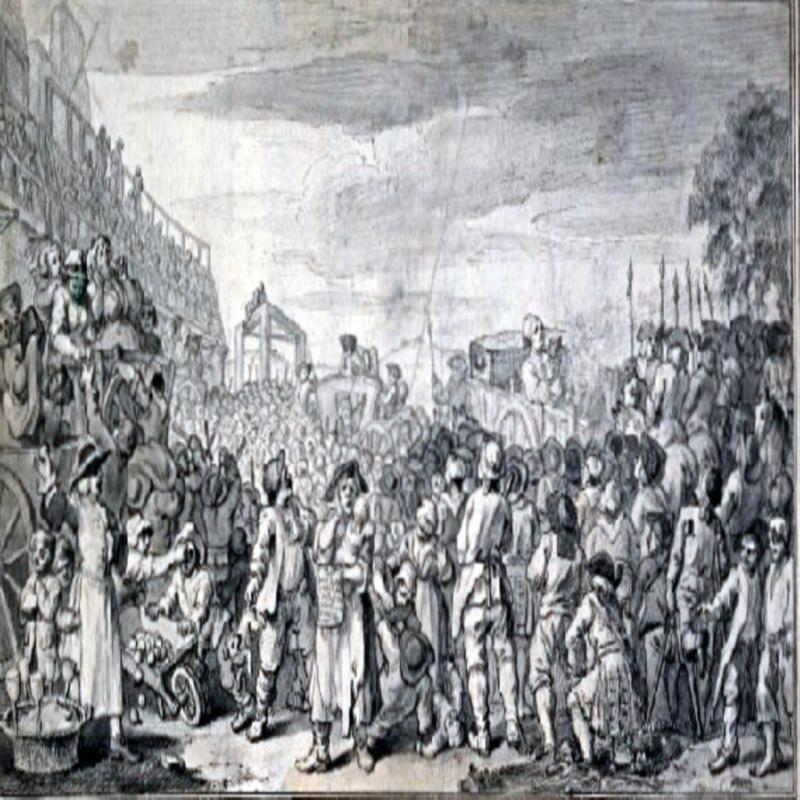 On the day of execution the condemned prisoners, wearing a white linen shirt over their clothes and a cap on their heads, are tied two together and placed on carts with their backs to the horses' tails. These carts are guarded and surrounded by constables and other police officers on horseback, each armed with a sort of pike. In this way part of the town is crossed, and Tyburn, which is a good half-mile from the last suburb, is reached, and here stands the gibbet. One often sees criminals going to their death perfectly unconcerned, others so impenitent that they fill themselves full of liquor and mock at those who are repentant. When all the prisoners arrive at their destination they are to mount on a very wide cart made expressly for the purpose, a cord is passed round their necks and the end fastened to the gibbet, which is not very high.
The chaplain who accompanies the condemned men is also on the cart; he makes pray and sings a few verses of the Psalms. Relatives are permitted to mount the cart and take farewell. When the time is up - that is to about a quarter of an hour - the chaplain and relations get off the cart, the executioner covers the eyes and faces of the prisoners with their caps lashes the horses that draw the cart, which slips from under the condemned men's feet, and in this way they remain all hanging together. You often see friends and relations tugging at the hanging men's feet so that they should die quicker and not suffer.
The bodies and clothes of the dead belong to the executioner; relatives must, if they wish for them, buy them from him, and unclaimed bodies are sold to surgeons to be dissected. You see most amusing scenes between the people who do not like the bodies to be cut and the messengers the surgeons have sent for bodies; blows are given and returned before they can be got away, and sometimes in the turmoil the bodies are quickly removed and buried.
There is no other form of execution but hanging; it is thought that the taking of life is sufficient punishment for any crime without worse torture. After hanging murderers are, however, punished in a particular fashion. They are first hung on the common gibbet, their bodies are then covered with tallow and fat substances, over this is placed a tarred shirt fastened down with iron bands, and the bodies are hung with chains to the gibbet, which is erected on the spot, or as near as possible to the place, where the crime was committed, and there it hangs till it falls to dust. This is what is called in this country to 'hang in chains'.
Tagged as: Fact File, Georgian
Share this post: