A Portrait of Julius Caesar

Posted on 6th February 2021
In his book The Twelve Caesars written in 121 AD the Roman historian Gaius Suetonius Tranquilus, better known simply as Suetonius, provides us with our most vivid account of Julius Caesar, his physical appearance, his personality, and his character.
The man, who though he would never be Emperor himself destroyed the Roman Republic and paved the way for the greatest Empire the world had then seen; the man whose name all future Emperor’s would take and would later be adapted to include Kaiser and Tsar. The man who would be assassinated on the Ides of March, 44 BC, before his ambition could be realised by those he thought were his friends. 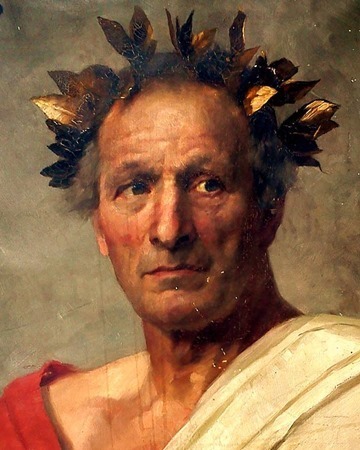 This is the man Gaius Julius Caesar according to Suetonius:
"He was tall, of a fair complexion, round limbed, rather full faced, with eyes black and piercing; he enjoyed excellent health except toward the close of his life when he was subject to sudden fainting fits and disturbances in his sleep. He was likewise twice seized with the 'falling sickness,' while engaged in active service.
He was extremely nice in the care of his person, and kept the hair of his head closely cut and had his face smoothly shaved. His baldness gave him much uneasiness, having often found himself on that score exposed to the jibes of his enemies. He used therefore to brush forward the hair from the crown of his head, and of all the honours conferred on him by the Senate and People, there was none which he either accepted or used with greater pleasure than the right of wearing constantly a laurel crown.
It is said that he was particular in his dress, for he wore the (special toga only Roman senators could wear) with fringes about the wrists, and always had it girded about him, but rather loosely.
He was a notable lady's man, and indulged in many intrigues; he was especially intimate with Servilia, the mother of Marcus Brutus Junius, for whom' he purchased in his first consulship . . . a pearl which cost him 6,000,000 sesterces and in the Civil War, besides other presents assigned to her -for a trifling consideration -some valuable farms that had been set up at public auction.
He was perfect in the use of arms, an accomplished rider, and able to endure fatigue beyond all belief. On a march he used to go at the head of his troops, sometimes on horseback, but oftener on foot, with his head bare in all kinds of weather. He would travel post in a light carriage without baggage, at the rate of one hundred miles per day; and if he was stopped by floods in the rivers, he swam across, or floated on skins inflated in the wind, so that he often anticipated the tidings of his movements.
Often he rallied his troops by his own personal exertions, stopping those who fled, keeping others in their ranks, and seizing men by the throat, turned them again towards the enemy, although numbers were sometimes so terrified that an eagle bearer thus stopped made a thrust at him with the spearhead, and another on a like occasion left the standard in his hand."
Tagged as: Ancient & Medieval, Fact File
Share this post: