Posted on 13th April 2021
He was a warrior no doubt but also a man of peace, a reformer, defender of the Christian faith and the only man to stubbornly resist the Danish incursion in a Saxon England much of which had long ago succumbed. He is also the only English Monarch ever to be assigned the title – Great.
Alfred was born in the village of Wanaling in Oxfordshire in 848, and though he was the son of a King, Ethelwulf of Wessex, with three older brothers he was never expected to rule. So at the age of six he was sent to Rome to be educated only to return four years later to find his father’s Kingdom in turmoil.
The brother’s had set to squabbling among themselves with their father only adding fuel to the fire by setting one against the other and it was only to prevent his Kingdom from descending into civil war that a compromise was reached. Power would be shared between the contending parties with his father ruling in the East.
Shortly after his father’s death in 856, the Kingdom was reunited once again under his eldest son Ethelbald and with the line of succession restored all of Alfred’s older brothers would rule before him. Once more Alfred was able to indulge his love of learning at least for the time being but his brothers Ethelbald and Ethelbert did not reign for long and in 866, Ethelred succeeded to the throne and fearing that yet another Royal death might cast Wessex into a period of dangerous uncertainty the Witan, or Assembly of Noblemen, crowned Alfred his brother’s successor while the King still lived making him effective co-ruler.
England during this period was under constant attack by the Danes or Vikings. In the past Viking raids vicious and brutal though they were, had been made for plunder, but now their minds turned to conquest.
In 868, Ethelred and Alfred embarked on a military campaign to keep the Danes out of the adjoining Kingdom of Mercia but despite Alfred leading them to a brilliant victory at the Battle of Ashdown subsequent defeats at Basing and then Merton where Ethelred was killed was to see him withdraw back to Wessex.
Alfred was formally crowned King of Wessex in April 871, but the defeats in Mercia were to see his Kingdom invaded by the Danes. He had little choice but to make a hasty peace and buy the Danes off with money or Danegeld.
The Danes withdrew their forces from Wessex as agreed but it was to prove only a reprieve not peace for the Danes soon had an ambitious and aggressive new leader in Guthrum who had no intention of honouring agreements made by others.
In 876 he attacked and occupied Wareham in Dorset but surprised by Alfred’s swift response he soon found himself besieged. The town held out but Guthrum was trapped and forced to negotiate. Hostages were exchanged to ensure compliance and Guthrum swore on the Holy Ring of Thor to depart Wessex and never return.
That same night he ordered his hostages killed and slipped away to occupy the town of Exeter but again Alfred pursued him and Guthrum was forced to retreat back into Mercia; but despite being forced to flee his ambition to become King of Wessex remained undimmed and in January 877, he made a surprise attack upon the town of Chippenham where Alfred was staying over the Christmas period celebrating Holy Week.
This was a time in the Christian Calendar of peace and religious devotion but the pagan Danes as did not respect this and taken totally unawares a terrible massacre ensued with Alfred fortunate to escape with his life as he, along with a small band of followers, fled into nearby woods and swamps. 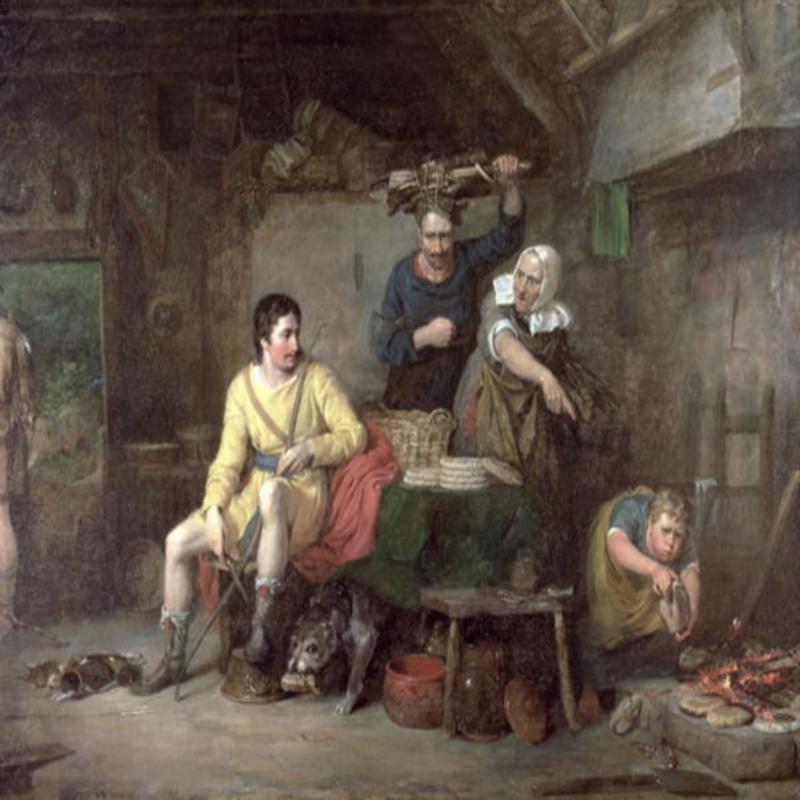 Alfred was now effectively a man on the run and little is known of this brief period of his life but according to legend he was given shelter by a peasant woman who unaware of who he was made him work for his keep. One day he was told to keep an eye on some cakes which, preoccupied with other thoughts, he allowed to burn. Upon her return the woman gave him the sharp edge of her tongue but instead of reacting as one might expect a King would he apologised and promised to be more careful in the future. He had been taught an early lesson in humility and it was one he would not forget.
By Easter 877, Alfred had managed to raise the militias of various counties and had constructed a fort at Athelney from where he could renew his resistance.
The 870’s were to be a dark decade for Saxon England with almost the entire country falling to the Danes with only Alfred in Wessex continuing to hold out. In early May 878 he left his fortress in the Somerset marshes to travel to Egbert’s Stone near Selwood. He had earlier sent forth messengers with orders for the men of Somerset, Wiltshire and Hampshire to gather there. It was a risky strategy to leave the safety of Athelney but Alfred was determined to take the offensive against the Danes and much to his relief he found he had maintained the loyalty of local officials, the Earldoman, Reeves, and Thegns who were vital to the recruitment of men and the provision of supplies. 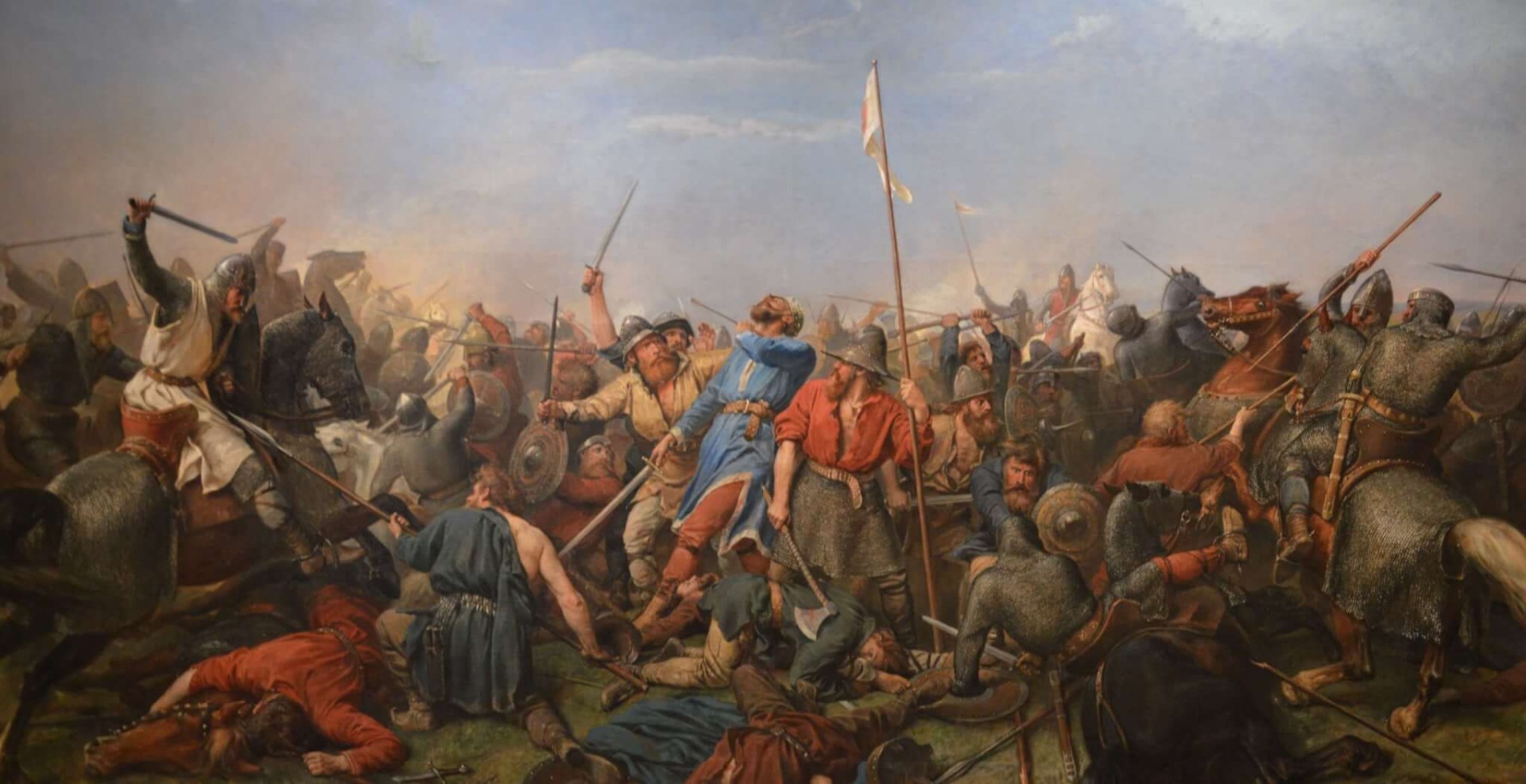 With his army assembled on 12 May 878, Alfred confronted Guthrum at the Battle of Edington, also known as Ethandum. It was a violent and bloody struggle: “Fighting ferociously, forming a dense shield wall against the whole Pagan army, and striving long and bravely, at last he achieved the victory. He overthrew the Pagans with great slaughter.”
Alfred had won a resounding victory but Guthrum was not dead and what remained of the Viking army fled back in some disorder to its base at Chippenham where Alfred declined to attack them. He knew how adept even a much depleted Viking army were at defending a fortified position. So he besieged the town but at a distance after first removing all livestock from the surrounding area and burning nearby crops thereby destroying any means of sustenance that could be garnered by sortie - he would starve them into submission.
Two weeks later the bedraggled and malnourished Danes surrendered and Guthrum took an oath to leave Wessex and never return but Viking oaths had been broken before and Alfred now demanded that Guthrum be baptised a Christian. If he refused then he and his men would be executed. Guthrum had little choice but to comply and at a time when the fear of God, or Gods, was a very real one. As such, Guthrum who was released and returned to East Anglia where many of his people had settled never again posed a threat, but the Vikings had not gone away.
Not long after the banishing of Guthrum another group of Danes attacked and occupied Rochester but upon hearing that Alfred had mobilised his forces and was advancing on the town they quickly re-boarded their ships and sailed away. Unlike other Saxon Kings, he was a man to be feared and his reputation was growing.
In 886, Alfred occupied London and immediately set about establishing it as a major trading port. He had already created a standing army now he built a fleet of ships that were to prove more than a match for the Vikings at sea. But more than just a warrior he was eager to set about reforming the legal system and establishing new standards of education for the elite but war soon loomed once more.
In the autumn of 893 he was to face-down the last great threat to his Kingdom when 330 Danish ships landed on the south-coast of England. These ships carried not just Viking warriors but also their wives and children. This was not to be a raid for plunder but one of conquest and occupation. The Danes split into two groups with one occupying the town of Appledore and the other Milton.

Alfred declined to confront them head on but instead besieged the towns, cut their supply lines, and blocked off any avenues of escape. An attempt by the Danes to force their way through to the West was repelled and an advance down the Thames Valley towards London was thwarted. By 896 after almost three years of bitter warfare the Danes gave up the struggle and of those who remained some managed to flee to Northumbria but most returned to Scandinavia pursued by the ships of Alfred’s fledgling navy as they did so.
By this time Alfred was being referred to as King of England by the Pope in Rome who considered him a great Christian who had not only defeated the Pagans in battle but had converted their leaders to the one true faith. As a result, he was showered with honours and gifts including a portion of the Holy Cross but the truth was Alfred never ruled the entire country, was never crowned its King and he certainly never referred to himself as such. He ruled only an expanded Wessex which covered southern England, the West and the lower Midlands. Much of England still remained under Danish control. But he had saved Saxon England from complete annihilation and had earned the respect and fear of the ferocious Danes. 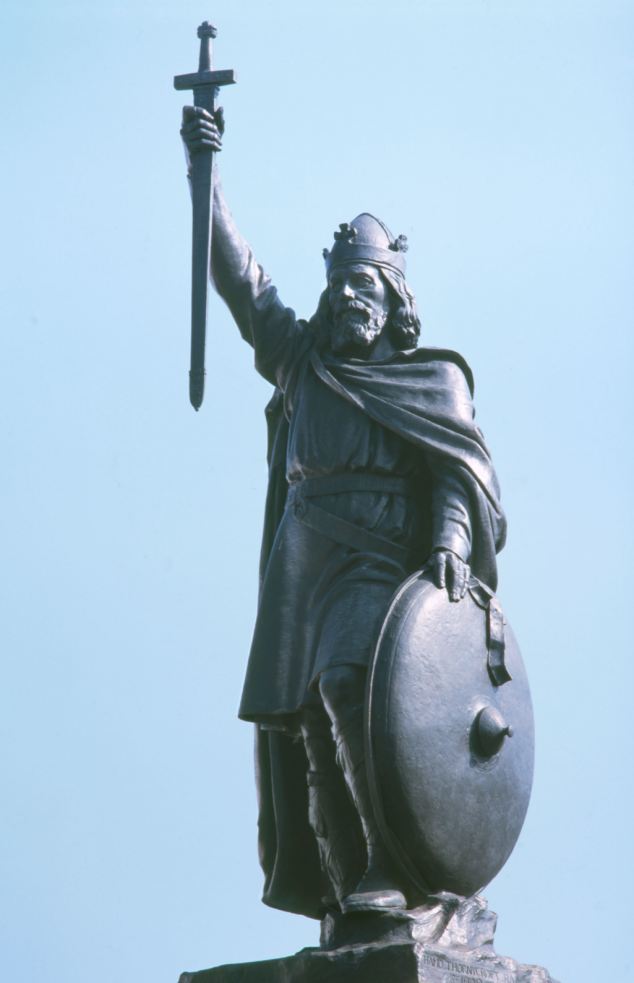 Alfred died after a long illness on 26 October, 901.
Although he is often portrayed as the great warrior King war was for him always a last resort but when confronted with it he acted swiftly and with absolute conviction and resolve. But he was always happiest reading and composing and would spend many hours saying prayers for the repose of his soul, and the souls of his people. He wrote: “He seems to me a very foolish man, wretched, who will not increase his understanding while he is in this world, and ever wished long to reach that endless life when all shall be clear.”
Never physically robust and often unwell Alfred died on 26 October, 901 aged 53. He had been a statesman, a great reformer and a man of peace whose life had been blighted by war. His lasting contribution was to lay the foundations for his illegitimate grandson Athelstan some thirty years later to extinguish the Danish threat and rule over a unified Anglo-Saxon England for the first time.
Tagged as: Ancient & Medieval
Share this post: