Posted on 4th October 2021
The Victorian era was a time of strict morality where decency and rectitude remained paramount and how one was perceived by others would be reflected in how you and your family would be treated by society.
Having a child out of wedlock then could not only lead to great poverty and distress but carried with it a stigma that could see the woman shunned and her family ostracised. As a result fostering or Baby Farming as it was known at the time was commonplace.
Women who’d had sex without due care, or had been abandoned by the father of the child, particularly those from respectable middle-class families would advertise for someone to take the child and care for them. They would pay for this service sometimes with a large one-off remuneration but more often than not on an ongoing basis. Once the transaction had been made the mother would, hopefully, return to her previous life as if nothing had happened. And there were many women willing to provide this service, some even chose it as a profession, and as is always the case some were diligent and some were not. One of the latter women was, Amelia Dyer.
Amelia Elizabeth Hobley was born in the village of Pyle Marsh near Bristol in 1837, the youngest of 5 children. Her father was a master shoemaker and the family were prosperous enough for the children to attend school, and as a young girl Amelia was to display a passion for poetry and literature. Her childhood was marred however, by her mother Sarah’s mental illness that had apparently been caused by an earlier bout of typhus, or at least been exacerbated by it. Often incapacitated and prone to violent mood swings it was Amelia who nursed her through much of the ordeal, and we can only speculate to what extent this may have influenced her future behaviour. When her mother died in 1848, Amelia went to live with an aunt.
As a young woman Amelia trained as a corset maker and in 1861 moved into lodgings where she met and married 59 year old George Thomas. Whether marrying a man 35 years her senior was an attempt to find a father figure to replace her own father James, who had died two years earlier we will never know but to make it seem more respectable on the marriage certificate Amelia increased her age by six years while George reduced his by eleven. 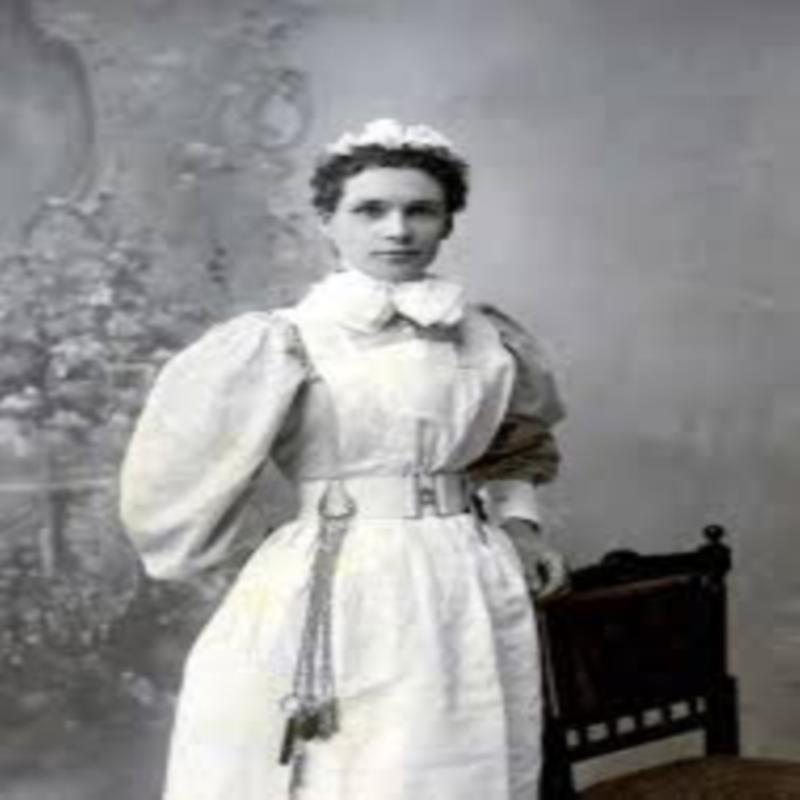 During the early years of their marriage Amelia worked as a nurse, a respected profession but one of long hours and hard work, and it was a midwife, Ellen Dane, who suggested an easier way of making money – Baby Farming. She told her that she should invite women who had conceived illegitimately and were in the advanced stage of pregnancy into her home where they could give birth. She would then, for a one-off payment, farm out their babies for adoption.
Amelia did not act immediately on Ellen’s advice but had obviously absorbed it for having given birth to her own daughter and following her husband’s death in 1869, she left nursing and using her credentials as a carer established herself as a Baby Farmer.
At her house in Totterdown, a suburb of Bristol, she took in unmarried pregnant women whilst also advertising her services as a nurse - was this the beginning of her killing spree?
How long she may have been disposing of the infants in her charge not through adoption but death we cannot know but she had been reported to the police on a number of occasions for neglect, and by a local doctor whose suspicions had been aroused by the numerous times he had been called to the house to certify death and issue the appropriate certificate.
But it wasn’t until 1879, ten years after opening her establishment that she was at last sentenced to six months imprisonment for infant neglect.
Upon her release she changed her modus operandi and no longer would the doctor be called to the house. If there were any babies to be disposed of she would do it herself. Moreover, to avoid detection and maintain a degree of anonymity she frequently changed locations and those women who now wished to retrieve their children would no longer be able to do so.

Amelia was known to be an abuser of both alcohol and opiates and was to be confined to a mental institution on a number of occasions. Whether these periods of mental illness were genuine or a ruse to avoid suspicion whenever difficult questions were being asked it is impossible to know. She had certainly worked in such institutions in the past and knew very well how they operated.
Amelia Dyer may have murdered babies and young infants over a period spanning many decades but it was one specific case that would prove her downfall and bring her within the purview of the Hangman’s Noose.
In January 1896, Evalina Marmon gave birth to an illegitimate daughter she named Doris; two months later she placed an advertisement in the Bristol Times and Mirror Newspaper. It read: “Wanted, respectable woman to take young child.” Also, in the newspaper was another advertisement placed by Amelia Dyer: “Married couple with no family would adopt healthy child, nice country home. Terms £10 – Harding.”
Evalina Marmon soon received a letter from this, Mrs Harding: “I should be glad to have a dear little baby girl that I could bring up and call my own. Myself, and my husband are dearly fond of children. I have no child of my own. A child with me will have a good home and a mother’s love.”
A week later at a meeting in Cheltenham, Evalina handed over her daughter along with the £10 fee. It was to be the worst decision of Evalina Marmon’s life.
Following the exchange Amelia travelled to her daughter’s residence at 76 Mayo Road in Willesden, London. There she wrapped some edging tape usually used in dressmaking around the baby Doris’s neck and knotted it before watching her die. Shortly after, another baby named Harry Simmons who had earlier been delivered to 76 Mayo Road suffered a similar fate.
On 2 April 1896, she placed the two bodies in a carpet bag weighed down with bricks and tossed it into the River Thames at Caversham Lock near Reading.
Prior to this on 30 March, a bargeman had found a package floating near the same spot. It contained the body of a baby girl later identified as Helena Fry and on the packaging they could discern the name of a Mrs Thomas, and an address. It was this information that was to lead them to Amelia Dyer. Although, this was not the murder she would be charged with.
On 3 April, police raided the house at 76 Mayo Road and though no human remains were found the stench of decay was overwhelming. Other evidence was also found such as white edging tape, telegrams arranging adoptions, receipts from advertisements, and letters from mother’s requesting information on the well-being of their children.
The following day Amelia Dyer was arrested on suspicion of murder and confined at Reading Police Station. 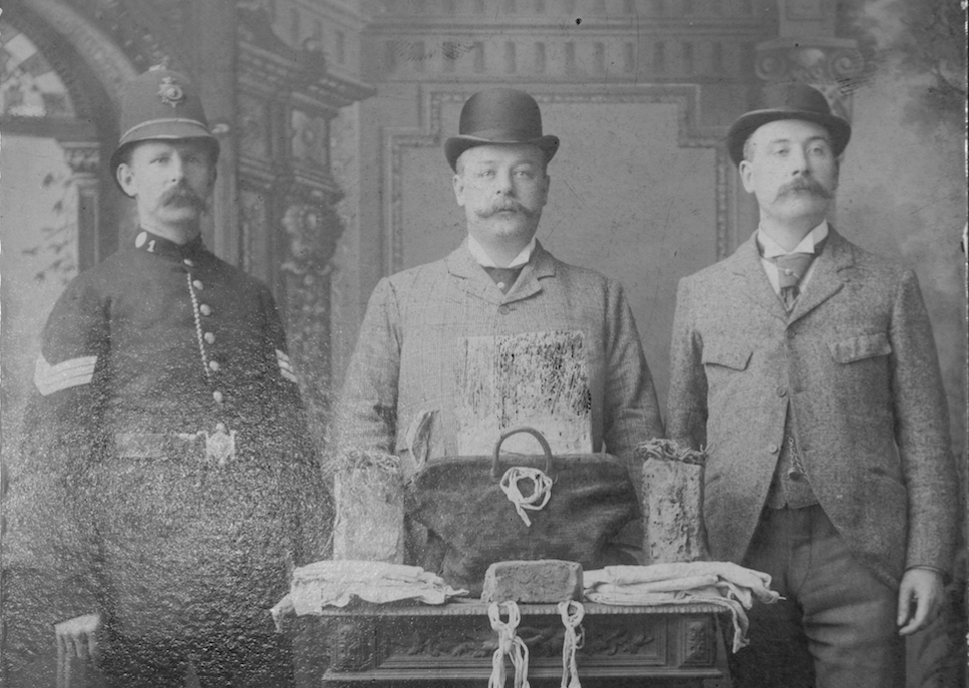 Over the following week the River Thames in and around Caversham Lock was dragged and on 10 April the carpet bag containing the bodies of Doris Marmon and Harry Simmons was discovered. Upon learning that the bodies had been found, Amelia, who had earlier tried to commit suicide, confessed declaring: “You’ll know which ones are mine by the tape wrapped around their necks.”
Having identified Doris Marmon as one of the victims from evidence found at the house her mother was now brought to London to confirm the baby was hers. She then identified Amelia Dyer in a police line-up just eleven days after trusting baby daughter to her care.
On 21 May 1896, Amelia Dyer stood trial at the Old Bailey for the murder of Doris Marmon. She pleaded guilty but declared herself insane. Her plea was rejected by the Judge and two days later after the Jury had deliberated for just five minutes she was found guilty and sentenced to death. She was hanged on Wednesday 10 June 1896 at Newgate Gaol in London. While waiting on the scaffold she was asked if she had any last words. Expecting some words of remorse she responded instead: “No, I have nothing to say.”
During her confinement she had written what has been referred to as her ‘Confession Diaries’ and it is now believed that she may have been responsible for as many as 400 murders. But she was not the first so-called Baby Farmer to be convicted of murdering those in her care that title belongs to Margaret Waters who was suspected of killing between 16 and 35 babies by poisoning or starvation. She was hanged on 11 October 1870, at Horsemonger Gaol in London.
The last person convicted in Britain of Baby Farming infanticide was Rhoda Willis who was hanged in Wales in 1907.
But Amelia Dyer remains the most prolific and notorious baby killer, and, as a popular ballad of the time declared:
The old baby farmer, the wretched Miss Dyer
At the Old Bailey her wages is paid
In times long ago, we’d ‘a’ made a big fy – er
And wasted so nicely that wicked old jade.
Baby Farming was practiced in countries all across the world and the crimes of Amelia Dyer were not as rare as one might like to think.
For example, Amelia Sach and Annie Walters, the notorious Finchley Baby Farm Murderers who poisoned the children in their care using chlorodyne mixed with morphine, were hanged together on 3 February 1903, in what would be the last double hanging in Britain, and the first at Holloway Prison. Other notorious baby killers include Millie Dean who was hanged in Invercargill, New Zealand on 12 August 1895; and John Makin of New South Wales, Australia, who was hanged at Darlinghurst Gaol on 15 August 1893.
Tagged as: Victorian, Women
Share this post: