Posted on 21st March 2021
During the early years of the American Civil War the exchange of prisoners taken in combat was fairly standard practice even though this was not a policy endorsed by the Federal Government which did not recognise the Confederacy as a nation but only as territories in a state of rebellion.
Despite this the practice was commonplace and as a result many of the prison camps on either side were ramshackle affairs only designed or adapted for temporary internment. Whenever there was a lull in prisoner exchanges these camps would very quickly become seriously overcrowded.
One such camp was Andersonville in Georgia and it would soon become notorious as the Camp of Death.
Following Abraham Lincoln’s Emancipation Proclamation of 22 September 1862, there was a clamour among abolitionist groups for the formation of regiments of Negro soldiers. The Confederacy, aware of this, issued a proclamation of their own stating that any Negro soldier captured in uniform would be returned to slavery and that any white Officer found to be in command of Negro soldiers would be deemed as inciting slave rebellion and would be hanged. 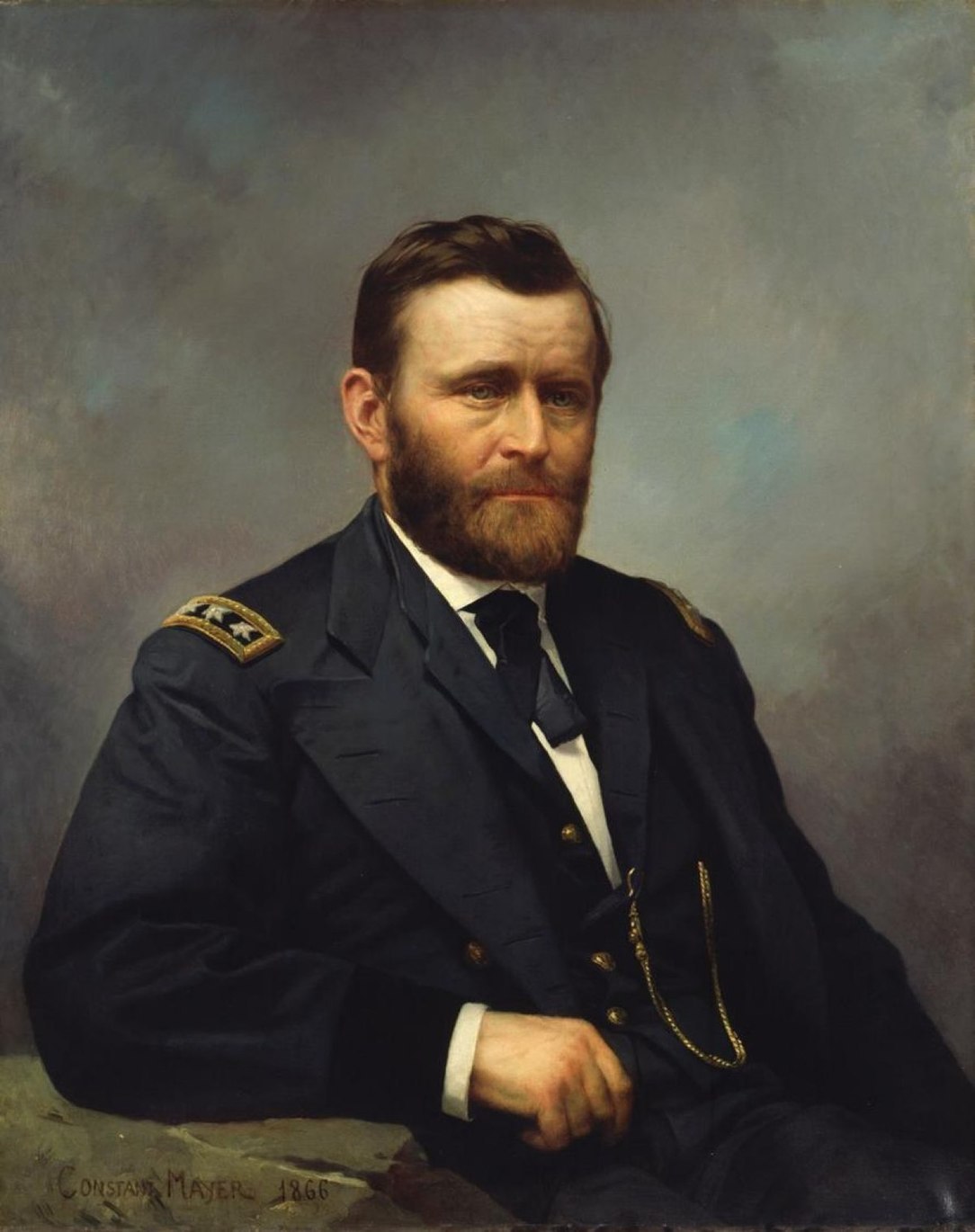 When Ulysses S. Grant was appointed Commander of all Union forces in the field in early 1864, he demanded that all prisoners be treated the same regardless of race and colour. When the Confederacy refused to comply with this demand Grant promptly stopped all prisoner exchanges.
But besides his strong moral stance he also had another agenda.
Grant was aware that the North had a vast pool of potential manpower, the South did not. Whereas fewer than 1 in 4 of Northern men of military age served in the Union Army throughout the war, 96% of white Southern men served at sometime or other during the four year conflict. Despite this disparity the North still had more than twice as many men in the field than the South and they knew that they could call upon reserves if need be.
Grant knew he could replace his losses and he knew the South could not.
By 1864, the war had begun to turn against the South and everywhere their armies were in retreat, the territory under its control was greatly reduced, its economy was in free-fall and taking care of tens of thousands of Union prisoners placed an unbearable burden on resources that were already strained to breaking point.
Andersonville, officially known as Camp Sumter, was built on 26.5 acres of swampy marshland deep in the interior of Georgia. In the summer it was unbearably hot and in the winter it froze. The water supply came from a creek which ran within the confines of the stockade and was also used for washing and as a makeshift latrine. As a result it quickly became polluted and dysentery commonplace.
Food was also scarce for both prisoners and guards and the little that was provided was of poor quality and often rancid.
The daily ration for a prisoner was one-quarter pound of cornmeal and one-third of a pound of bacon that was invariably distributed raw and was to largely run out in any case by the late autumn of 1864.
Food could be purchased at the store located within the camp which sold goods such as molasses at $12 a gallon, bacon at $6 a pound and blackberries at 60 cents a pin, but few prisoners had any money or any valuables to exchange and in reality the store merely served as a provocation to those slowly starving to death. 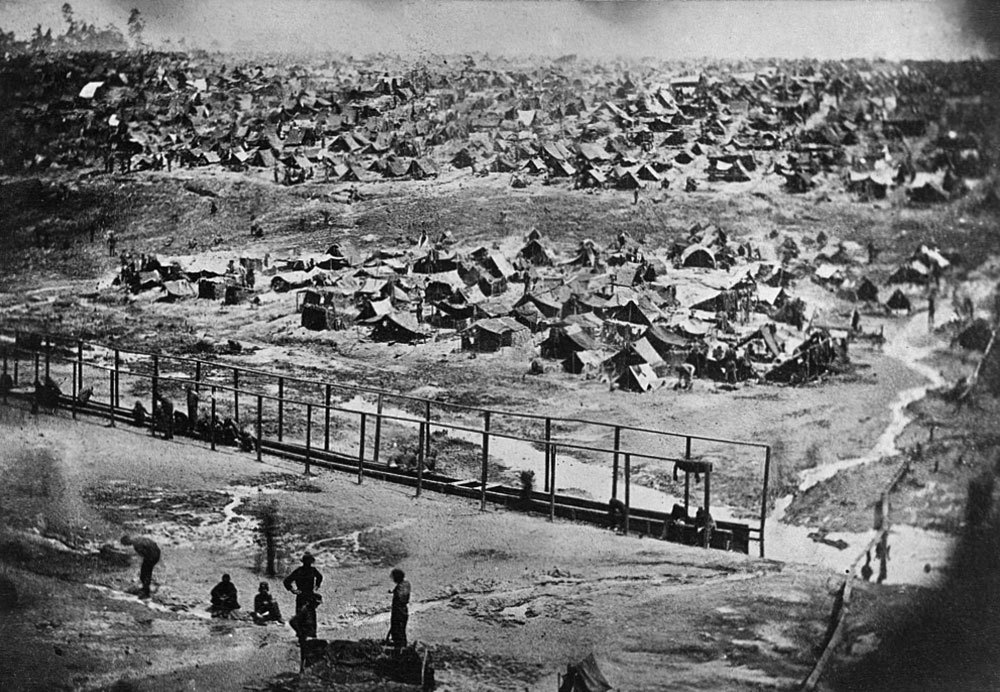 Most of the prisoners were housed in flimsy canvas shelters that provided little protection from the extremes of weather, some had to make do with coats stitched together and tied to poles while many had no shelter at all. With few blankets available and dressed only in the increasingly threadbare uniforms they had been captured in many prisoners froze to death while others died of sunstroke in the soaring temperatures of a Georgia summer.
There was also no soap available and though the prisoners tried to make do with a sand-based substitute hygiene was minimal, disease rife, and the prison hospital never less than full and though the doctors did their best with little in the way of medicines it became a place to die not a place of recuperation.
The sight of filth, the sound of illness and the stench of death was all-pervasive around the camp.
In such harsh conditions merely surviving from day to day was the priority and prisoners soon began to turn on one another. In particular, a group calling themselves the Andersonville Raiders instigated a reign of terror and stole clothing, jewellery and money from their fellow prisoners. Those who refused to willingly give up the few possessions they had would be beaten into doing so and some were killed. 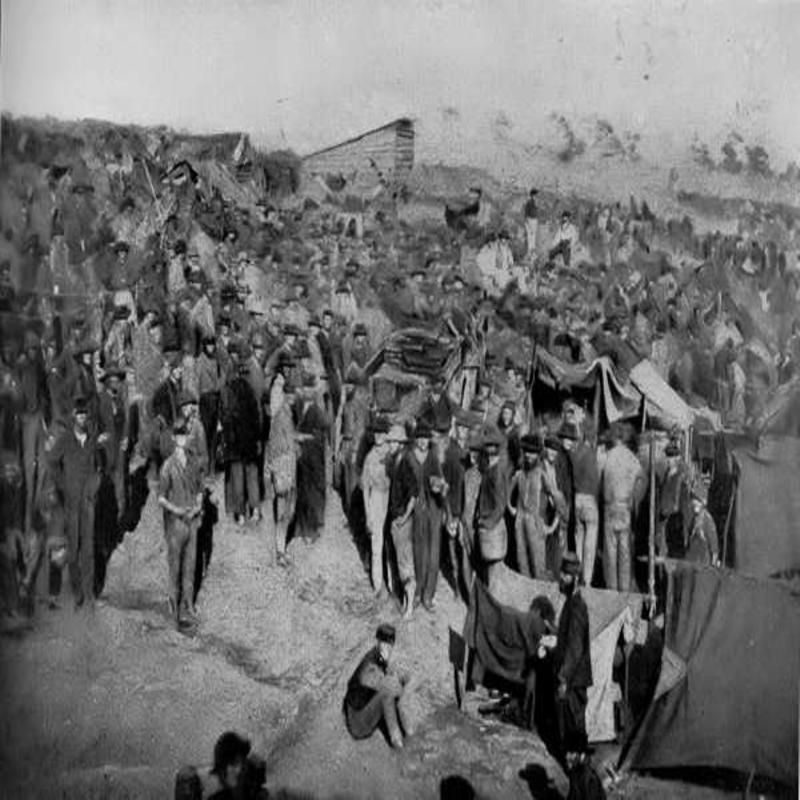 Despite the many complaints the Camp Authorities turned a blind eye to any reported incidents and on some occasions even colluded in them. In response the prisoners gathered together to form the Regulators, a vigilante police force to bring the miscreants to justice and those found responsible were arrested and forced to line up before their fellow prisoners where they were abused and beaten. Those they arrested the Camp Authorities permitted to be tried before a jury of their own Officers and punishments were administered to those found guilty. Indeed, six were even hanged.
The Camp Commander at Andersonville was Heinrich Hartmann “Henry” Wirz, a Swiss national who had settled in America after fleeing the 1848 Revolutions that had engulfed Europe where he established a successful medical practice in New Orleans. He was eager to repay the country that had given a poor immigrant such as himself another chance and upon the outbreak of the Civil War he enlisted in the 9th Louisiana Infantry. 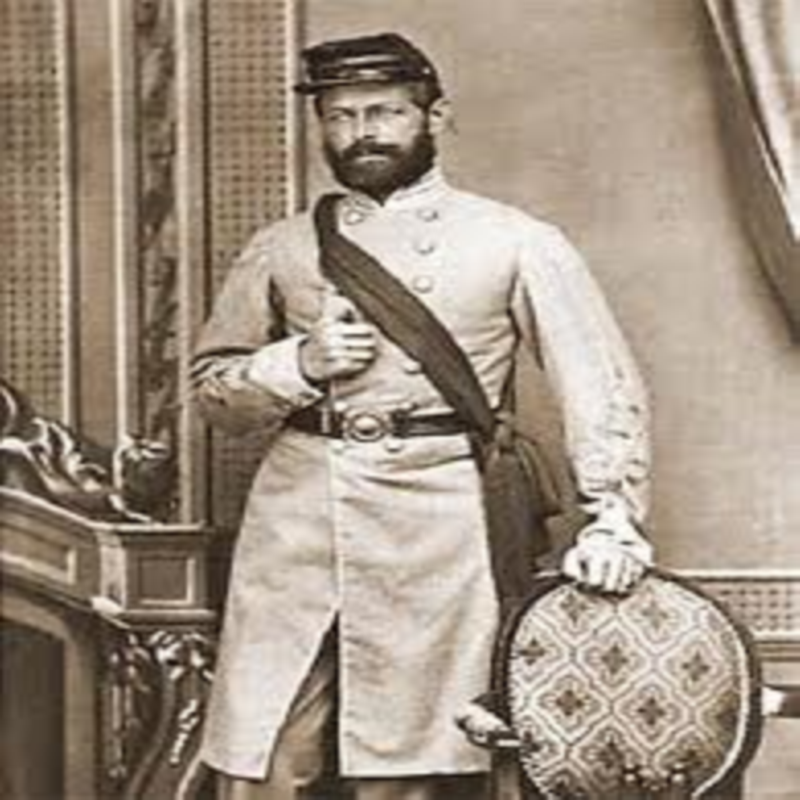 He claimed to have lost the use of his right arm at the Battle of Seven Pines in 1862 and invalided out of front-line service he was appointed to oversee the recently operational Andersonville Prisoner-of-War Camp in February 1864.
By the late summer of 1864 Andersonville was hideously overcrowded with at one point having more than 32,000 prisoners and General William Tecumseh Sherman’s devastating March through Georgia meant that the supply of food to the Camp had virtually dried up with dozens of men dying every day from starvation now as well as disease.
Wirz, was a dandy who took great care over his appearance would make regular tours of the Camp resplendent in his fine uniform but do nothing to alleviate the suffering he witnessed. Considered arrogant and aloof he was despised by those supposedly under his care even refusing to meet delegations of prisoners to listen to their complaints or discuss their needs.
Those prisoners who were caught trying to escape he ordered to be shot including those who left the precinct of the camp merely to fetch clean water. There was a way out of the nightmare that was Andersonville however, and that was to volunteer for service in the Confederate Army and it is estimated that around 6% of the prisoners did so.
Conditions in the Camp were described by survivors as the closest thing to a living hell and by the time of the Camp’s liberation in May 1865, 12,913 of the 46,000 men who were incarcerated there had died.
Many of those who were freed were so malnourished photographs of the emaciated skeletal figures of former prisoners published in Harper’s Weekly shocked a nation both North and South. The same month that Andersonville was liberated Henry Wirz was arrested at his home and taken north to Washington. 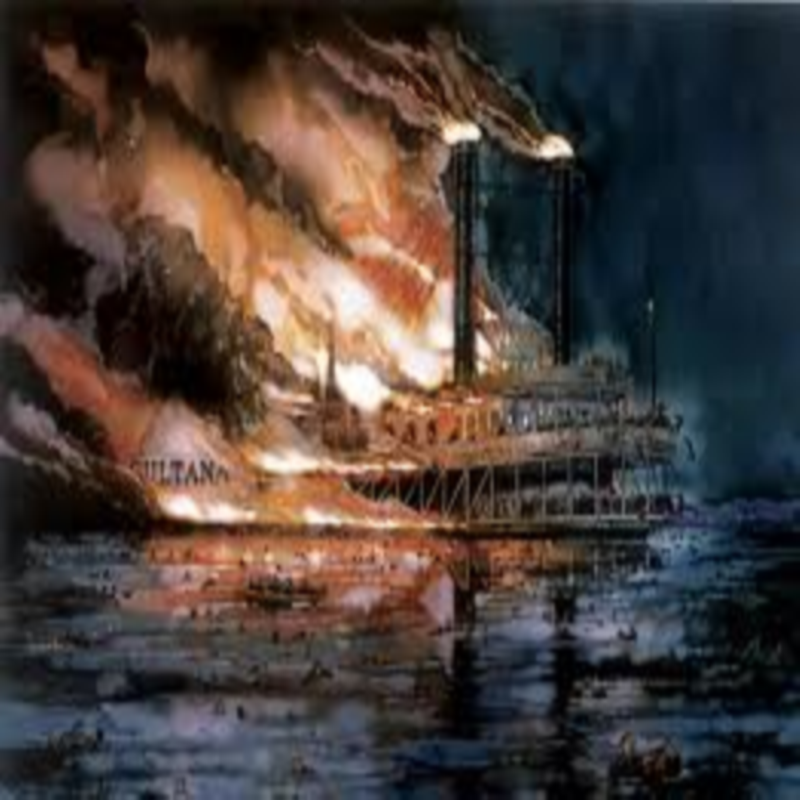 The published photographs of the pitifully thin figures who barely seemed to be men at all demanded action and the clamour for retribution grew all the greater when on 27 April the steamboat Sultana carrying recently liberated Union prisoners north, many of them from Andersonville, exploded on the Mississippi River killing 1,800 of the 2,427 passengers aboard - the rumour was that it had been sabotaged.
On 21 August 1865, Wirz was arraigned on charges of wanton cruelty and of trying to impair the lives of Union prisoners. He pleaded not guilty.
The Military Commission formed to try him was headed by General Lew Wallace, the future Governor of New Mexico and author of Ben Hur.
There was little sympathy for Wirz from the victors in a war that had seen so much death and was by now being firmly blamed on the vanquished. The Court was not willing to accept his claims of mitigating circumstances, neither were they prepared to view the documents provided by his Defence Counsel that showed he had written numerous times to the Confederate Government in Richmond requesting more food and medical supplies and demanding that prisoners be moved to other camps to avoid overcrowding and disease. Instead witnesses came forward to describe his personal cruelty.
Some claimed that they had seen him carry out impromptu executions, others that he had said: “If any prisoner escapes I will starve every damned Yankee for it.”
The most damning evidence against him however was provided by Felix de la Baume who described in great detail conditions in the Camp, the humiliations and degradations endured by the prisoners and the callous indifference to the suffering of the Prison Authorities.
Wirz’s, plea that circumstances were out of his control and that he did his best in impossible circumstances were to no avail. He was found guilty and sentenced to death on 6 November 1865.
Wirz wrote to President Andrew Johnson, himself a Southerner from Tennessee and the only Southern Senator not to resign following secession, requesting clemency. The letter went unanswered and as such his plea was denied despite the fact that the Prosecution’s star witness Felix de la Baume turned out in fact to be the German Felix Oeser who had deserted from the 7th New York Volunteers, had never been present at Andersonville, and had a personal grudge against Wirz.
Evidence as to the culpability of Henry Wirz in the events at Andersonville was never more than hearsay and gossip.
Southern ports had been blockaded by the Federal Navy since 1861 and many people in the South were starving not just prisoners-of-war. Rampant inflation had made the Confederate currency almost worthless and the South could barely supply its own armies and General Grant’s decision to halt prisoner exchanges had burdened a nation close to defeat with mouths it couldn’t feed.
Conditions in Prisoner-of-War Camps were also harsh on both sides of the divide. Of those Union soldiers captured during the conflict 30,000 were to die during their internment or 15.5% of the total. The death rate among Confederate internees was 26,000 or 12%. Whether these figures in any way exonerate Henry Wirz is for the individual to decide.
These factors have led many to believe that Henry Wirz was little more than a scapegoat for the atrocities committed by both sides during the war.
In the days prior to his execution it was suggested to Wirz that his sentence could be commuted to life imprisonment if only he would provide evidence that would implicate the former Confederate President Jefferson Davis in the events at Andersonville but he refused.
Henry Wirz was executed on 10 November 1865. 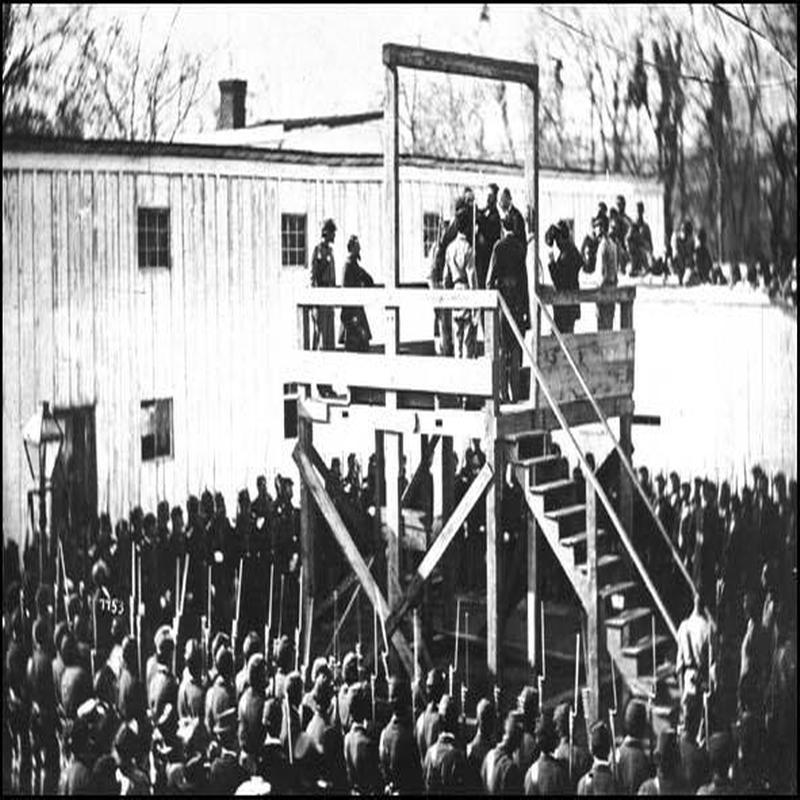 Standing upon the scaffold he refused to take confession instead declaring that he had done nothing wrong. When he was accused by a Major Russell of having deplored his duties, he replied: “I know what duty is Major, and I am being hanged for having done mine.”
As the hood was placed over his head the crowd began to chant “Remember Andersonville!” The drop from the scaffold had failed to break his neck and for more than two minutes he struggled and squirmed at the end of the noose as the life was slowly strangled out of him. And all he time those present continued to chant - Remember Andersonville!”
Tagged as: Miscellaneous
Share this post: