Posted on 23rd August 2021
Anton Adriaan Mussert considered himself a Dutch nationalist and patriot but he was to act against his own inclinations and betray his country and the people he had sworn to protect.
He was born on 11 May 1894, in the small town of Werkedam in rural North Brabant where his father was Headmaster of the local school and he grew up wanting to be a soldier but failed the medical and was bitterly disappointed when the Netherlands chose to remain neutral during the Great War.
With his ambition to be a war hero thwarted he decided to indulge his love of technology and all things mechanical studying civil engineering at the University of Delft. Following graduation he worked for Utrecht District Council in the Department of Waterways and Public Works.
From an early age he had displayed an interest in politics particularly that of the far-right and he was a great admirer of Mussolini whose fascist ideology, corporate vision and indeed mannerisms he would later adopt. During the 1920's he was active in the Dietsche Bund an organisation committed to incorporating Belgian Flanders into a Greater Netherlands but he remained very much on the fringe of politics and very much frustrated that his voice was not being heard.
On 14 December 1931, he was one of the founding members and soon after appointed leader of the Nationaal Socialitsche Beweging or N.S.B. They professed to be strong supporters of the Dutch Reformed Church, campaigned for a return to traditional values, sought to expand Dutch national territory and spoke often of the mystical bond of blood and soil - Mussert had found his spiritual and political home. 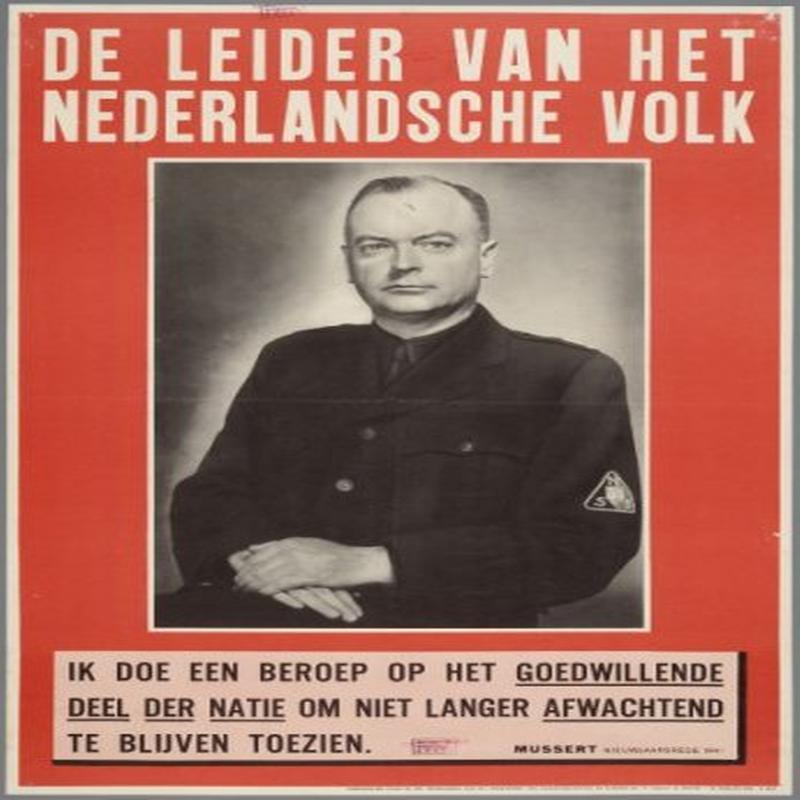 The Party struggled for support in a country where political extremism remained very much on the margins and in the first two years of its existence it rarely attracted more than 500 supporters to its rallies.
The Netherlands like every other country in Europe had suffered terribly during the Great Depression however, and in times of social distress people seek solutions and even in a country renowned for its tolerance the Dutch people were to prove just as vulnerable to the fascist ideology that was sweeping the Continent as anyone else.
By 1934, it was attracting 25,000 supporters to its Annual Rally in Amsterdam. 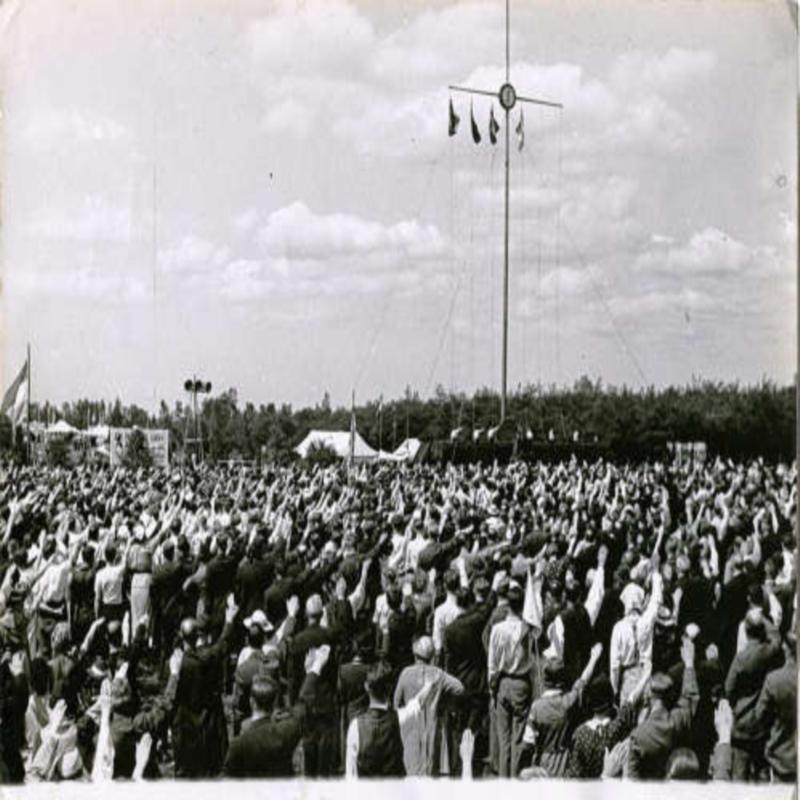 In the Election of 1935 it polled more than 300,000, mostly rural votes or 8% of the total, and it could also boast more than 50,000 members but this was to be the high-water mark of its support.
The N.S.B preached a doctrine of intolerance that did not sit easily with most Dutch people and by 1937 with the country beginning to recover from the worst economic recession in its history its support had more than halved; with no serious prospect of ever being elected to power Mussert was willing to consider other means and he began to work covertly towards a German invasion of his country and issued instructions to N.S.B members not to resist any German incursion into Dutch territory.
He also conspired with German Military Intelligence to kidnap Queen Wilhelmina in the hope that they would then install him as Head of State but the plot was foiled and the man with ambitions to be Die Leider was forced into hiding and so was unable to influence events when the actual invasion came.
At 03.55 on 10 May 1940, German forces invaded the Netherlands but despite being hopelessly out-gunned and incompetently led the Dutch Army fought back. The many inland waterways that traversed Holland made it difficult terrain for the German Army but their plan for victory in the West reliant as it was upon the tactic of blitzkrieg required the swift elimination of both Holland and Belgium.
Surprised at the level of Dutch resistance and concerned by any delay to their plans they decided to terrorise the Dutch Government into submission. On 14 May, they bombed Rotterdam utterly destroying the docks and the city centre and causing more than 20,000 casualties. Fearing that the same would now happen to Amsterdam and elsewhere and with no effective Air Force of its own the Dutch Government ordered a cessation of hostilities.
Four days of fighting had left 2,332 Dutch and 2,700 German soldiers dead with a further 17,000 wounded. But emerging from his bolthole at least one man was happy.
By the time of the German invasion support for the N.S.B had been reduced to little more than a rump but this didn't stop Mussert from declaring himself as the man who could rally the Dutch people behind their new German allies.
The Germans were at best sceptical, they were aware that his Party had made few in-roads in the major cities, that he had adopted no racial doctrine of his own and had once boasted that his Party had hundreds of Jewish members. He had only introduced a racial element into the Party Platform under pressure from the more extreme wing of his Party, the so-called Volksen. But Hitler needed a Dutch figurehead, one with a public profile who could be easily manipulated and would remain subservient and Mussert fitted the bill. 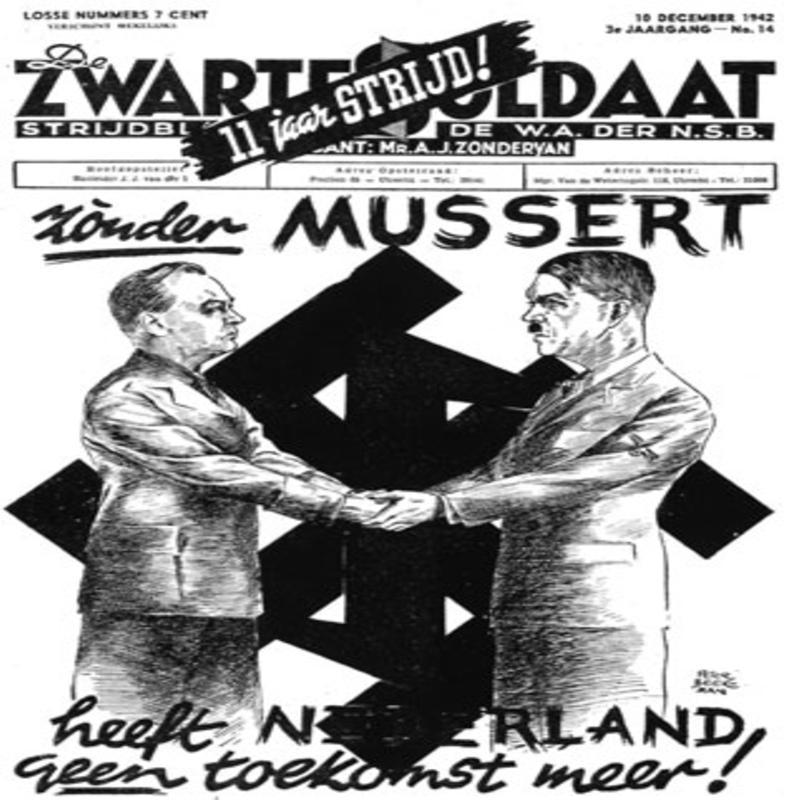 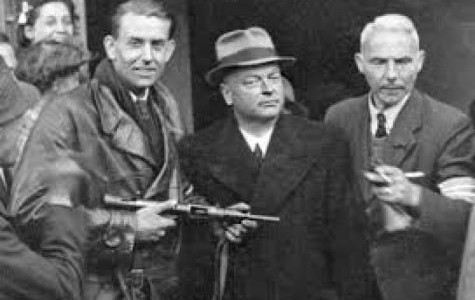 Following Germany's defeat he made no attempt to flee Holland believing that he had done no wrong. It took little time for the new Dutch Government to come for him.
On 7 May, 1945, he was arrested at the N.S.B's Headquarters in The Hague and put on trial for treason. On 28 November, after a trial lasting barely two days he was found guilty and sentenced to death.
His pleas to Queen Wilhelmina for clemency on the grounds that he was a patriot and had done his best to protect the Dutch people from the worst excesses of Nazi tyranny were ignored.
The truth was he had been a willing accomplice to the German invasion and occupation of the country he professed to love.
Anton Mussert was executed by firing squad on 7 May 1946.
Tagged as: Modern
Share this post: