Posted on 3rd May 2021
On 2 March 1642, King Charles I fearing for the safety of his family following the failed attempt to arrest his most prominent opponents in Parliament fled a hostile London in haste. It was now apparent to everyone that the dispute between the King and his Parliament was all but irreconcilable.
Despite the fact that war now seemed inevitable half-hearted negotiations continued over the next few months as both sides concentrated on raising troops, gathering arms, and securing areas of support.
If the King required further proof that his authority no longer ran in the country it was provided by Sir John Hotham, the Governor of Hull, who refused to surrender the city to him despite being expressly ordered to do so.
All further pretence at negotiations ceased when on 22 August the King raised his Standard in Nottingham in what was an effective declaration of war. Parliament, though reluctant to take up arms against the King had been preparing for it nonetheless. 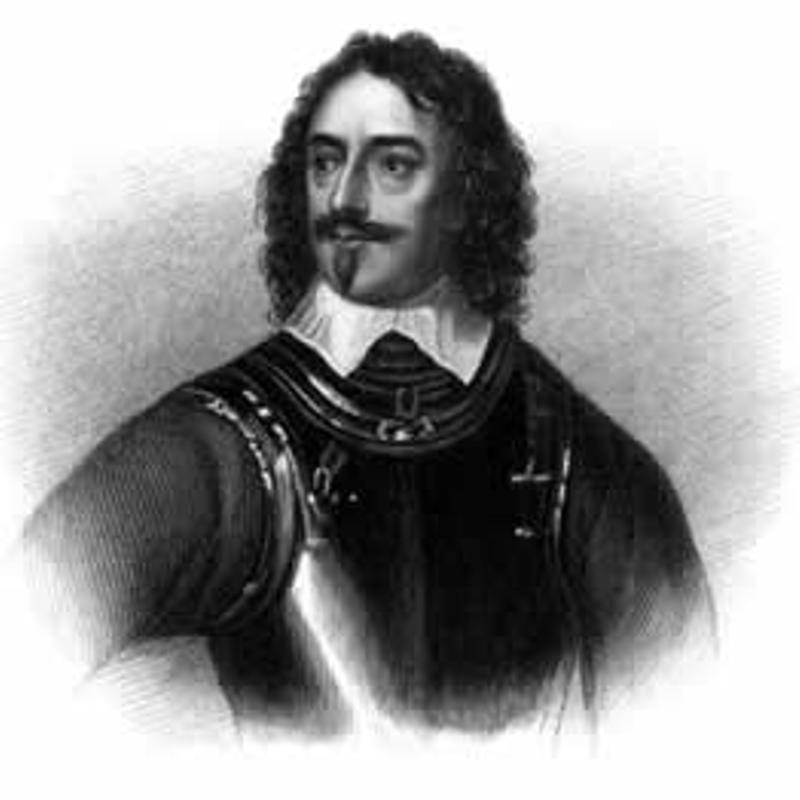 The man appointed to command their army was Robert Devereux, the Earl of Essex, who’d had a long if not particularly distinguished military career. Indeed, he was better known for his failures in the marriage bed than success on the battlefield but still he remained the most experienced soldier they could call upon. In the meantime, the King had been joined by his twenty two year old nephew Prince Rupert of the Rhine accompanied by his toy poodle, Boye.
Although some still held out in vain for a settlement the killing had already begun with the first casualty of the war being a Staffordshire farmer who working in his fields was approached by some Royalist cavalry who demanded to know if he was for the King or for Parliament? When he replied that he was loyal to both he was shot dead. Such incidences were becoming increasingly commonplace.
The first recorded skirmish between the opposing forces took place at the village of Southam near Stratford-Upon-Avon in Warwickshire on 23 August, the day after the King had raised his Standard in Nottingham. It was followed a month later by Prince Rupert’s routing of the Parliamentary cavalry at the Battle of Powick Bridge.
The early engagements of the Civil War had been decided overwhelmingly in the Royalists favour and confidence was high in their camp of a swift victory whilst doubts persisted within Parliamentary ranks that they had brought upon themselves God’s wrath in waging war upon their divinely appointed King.
Despite pockets of fighting elsewhere in the country the two main armies had manoeuvred awaiting an opportune moment to strike, badly in the case of the Earl of Essex who had a disconcerting habit of allowing the Royalist Army to get between himself and his base of operations in London. Now he had done so once again. 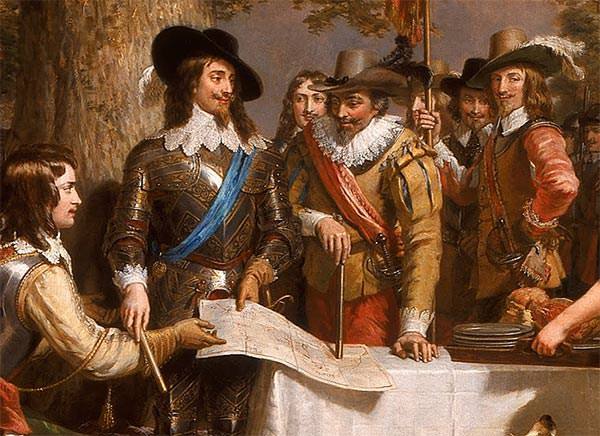 Following a Council of War the King decided to seize the initiative and force a clash of arms by blocking the Earl of Essex’s route back to the capital. On 22 October, he ordered his army to take the high ground at Edgehill some five miles from the town of Kineton in the beautiful Vale of the Red Horse, so named from the large figure that had once been cut into its distinctive red clay.
The Royalist army was now in a position from which to march on London and the Earl of Essex was forced to speed his army from their base at Warwick to prevent them from doing so.
That night as both armies prepared for battle there were many expressions of bravado but also no little nervousness. Few men on either side had any experience of war and had only the most rudimentary training in push of pike and sporadic musketry practice limited by the need to preserve powder. In fact it would be true to say hardly any had ever heard a shot fired in anger. They would be very reliant for leadership upon those of their Officers who had fought on the Continent during the Thirty Years War.
By early morning both armies had taken up battle formation but nothing happened until around midday when the Royalist infantry cheered by the sight of the dashing Prince Rupert his toy poodle Boye tucked under his arm urged them to begin advancing down the slope.
It was a move intended to provoke the Parliamentary Army to do likewise but they remained where they were and refused to be drawn. The Royalists goaded the Parliamentary troops for their cowardice and unwillingness to fight. They then cheered heartily as the King rode among them heedless of the danger.
Was Parliaments Army stronger in both men and arms afraid to face their King in battle? It seemed too many witnessing the scene that it was and the Earl of Essex came under increasing pressure from his own Officers commit to battle. 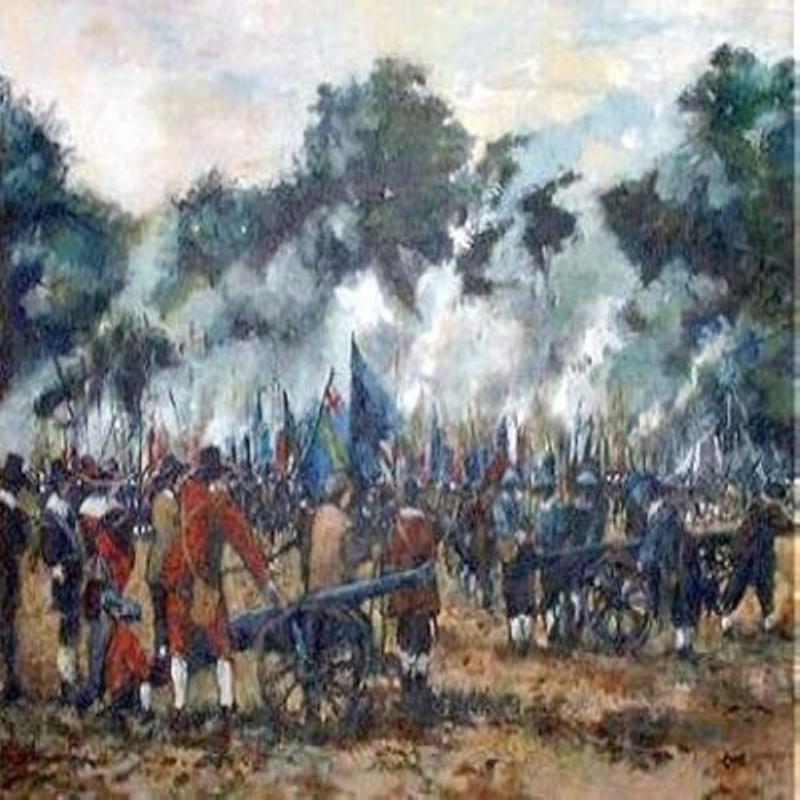 At last a Parliamentary cannon let loose a shot out of frustration rather than as the result of orders but the rest soon followed and a brief exchange of artillery fire now ensued.
With a clash of arms now inevitable Sir Jacob Astley, commanding the Royalist infantry recited a prayer that has since become justly famous: “O Lord, thou knowest how busy I must be this day. If I forget thee, do not thou forget me.” The First major battle of the English Civil War had begun.
Prince Rupert whose name ever since Powick Bridge had caused panic in his opponents did not hesitate to act. He gave the order for his cavalry to charge and the sight and sound of Rupert’s gentleman soldiers, his Cavaliers, charging at full gallop with swords drawn and hunting horns blaring struck fear into the hearts of the enemy whose left flank crumbled and fled. Worse was to follow for Parliament when the cavalry under the command of Sir Faithful Fortescue, contrary to his name, changed sides and joined in the chase. 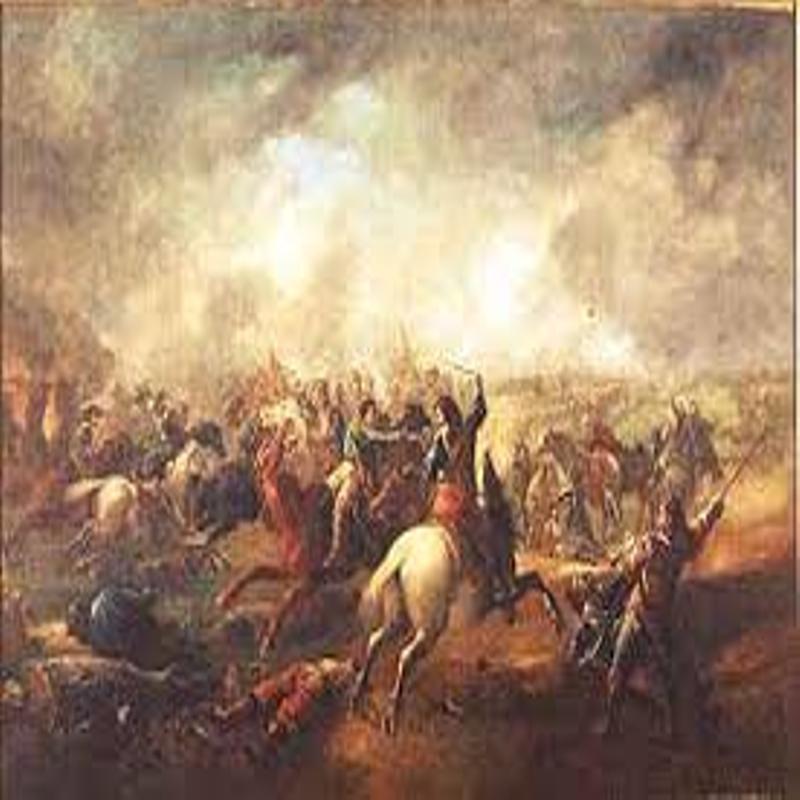 Witnessing the success of Prince Rupert’s cavalry, Lord Wilmott on the Royalist left flank also gave the order to charge with similar results but whereas Prince Rupert pursued the fleeing enemy to their baggage train which his men then joyously pillaged, Lord Wilmott chased the Parliamentary cavalry all the way to Kineton. It was all too easy and the King now made the tactical blunder of permitting his Lifeguards to join in the fun leaving him with no cavalry left on the field.
With much of Parliaments army having fled the field the Royalist infantry advanced with confidence but when it came to push-of-pike they were greatly disadvantaged being not just outnumbered but also poorly armed and ill-trained. If Charles had retained control of his Lifeguards he would have been able to outflank the Parliamentary infantry and bring events to a swift conclusion but now instead he suddenly found himself in danger of losing the battle; with his infantry being forced to yield ground and the formation appearing as if it might come apart, the King ordered the young Princes escorted from the battlefield as he took personal command riding among his men and exhorting them to ever greater efforts.
Sir Edmund Verney, one of the King’s oldest companions and his Standard Bearer was killed with the Standard itself carried triumphantly away with Sir Edmund’s severed hand still gripping it. It was to be daringly recovered by Captain John Smith who was later knighted by a grateful King.
The Royalist cause at Edgehill was only saved from catastrophe by the gradual return of their cavalry upon which a nervous Earl of Essex broke off the engagement.
A thousand men were left dead on the field at Edgehill with many more dying over the next few days from their wounds, and the King was to spend a restless night listening to the groans of the dying and the screams of those whose limbs were being amputated.
Charles kept his army at Edgehill overnight with the intention of resuming the battle in the morning but this the Earl of Essex had no intention of doing. He withdrew further to Warwick Castle yet again leaving the road to London open. 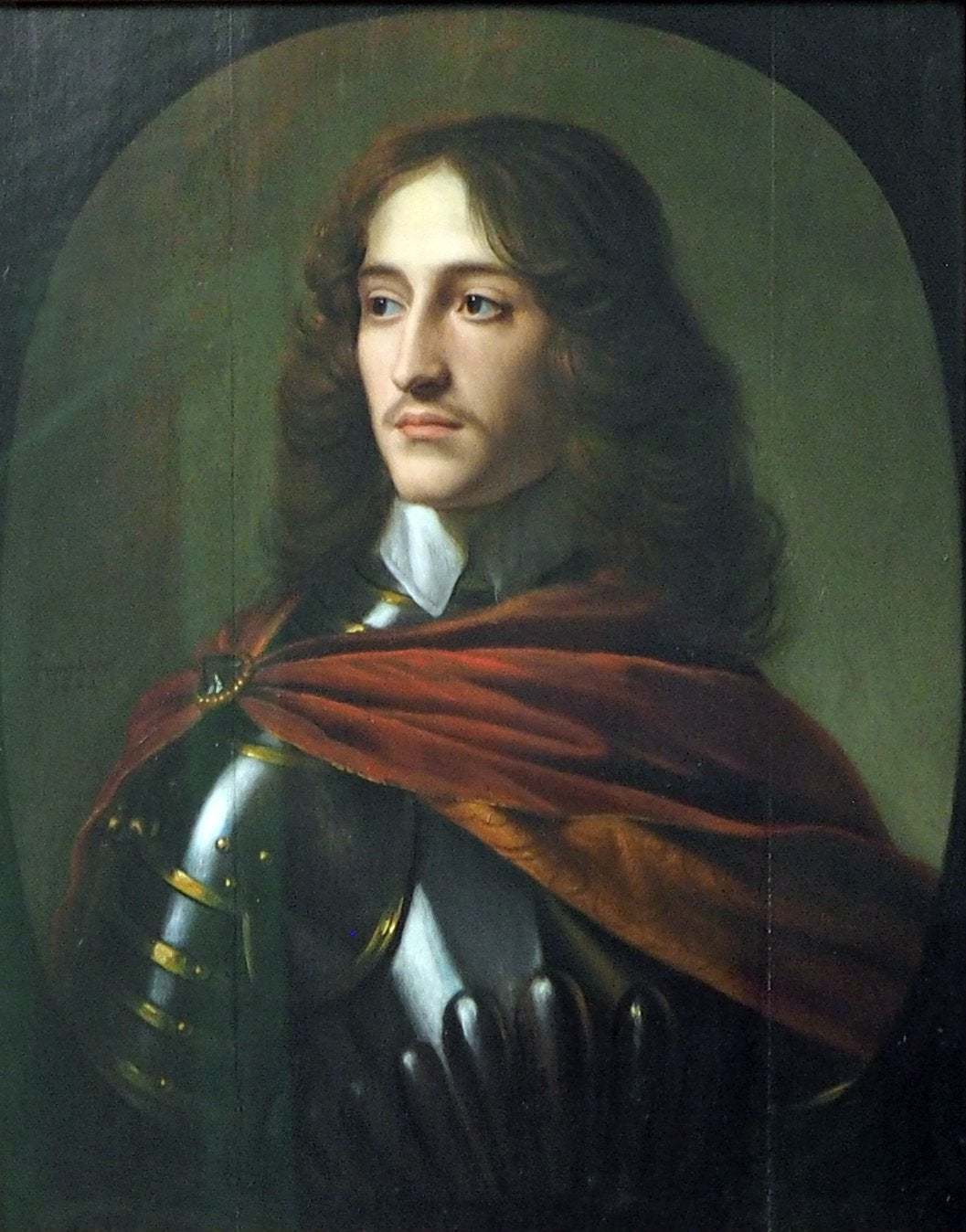 Prince Rupert wanted to advance on London immediately and was even willing to do so with his cavalry alone but the King was more cautious and wanted to consolidate his position. Again it was a mistake for other than the London Trained Bands the city lay largely undefended.
On 7 November, the Earl of Essex arrived back in London where addressing the Parliament he informed them of his great victory at Edgehill. It must have come as a shock to the appreciative Members when five days later Prince Rupert defeated a Parliamentary Army at Brentford on the outskirts of the city.
By the time the two armies clashed again at Turnham Green the city had rallied to Parliaments cause and the London Trained Bands reinforced by many citizen volunteers were able to muster more than 24,000 men to Prince Rupert’s 13,000.
Taking up a strong defensive position behind an array of hedgerows, fences and ditches Parliaments forces comfortably held off repeated Royalist attempts to force a way through and rather than risk his army any further, and contrary to the advice of Prince Rupert who wished to try and outflank Essex, the following day the King withdrew his forces north and established his capital at Oxford.
The Battle of Edgehill had been a tactical victory for the King but he would never again, come so close to capturing London and winning the war.
Tagged as: Tudor & Stuart, War
Share this post: