Battle of the Boyne

Posted on 16th July 2021
On 5 November 1688, the Dutch Prince William of Orange landed at Torbay in Devon with an army of 20,000 men. In an unusual turn of events he had actually been invited to invade the country by prominent members of the English aristocracy.
The Catholic King James II who already in his mid-fifties was an elderly man by the standard of his times had been expected to die without a male heir but his wife Mary of Modena had recently given birth to a healthy baby boy. Many disturbed by his advocacy of the Old Religion now feared the return of a Catholic dynasty. 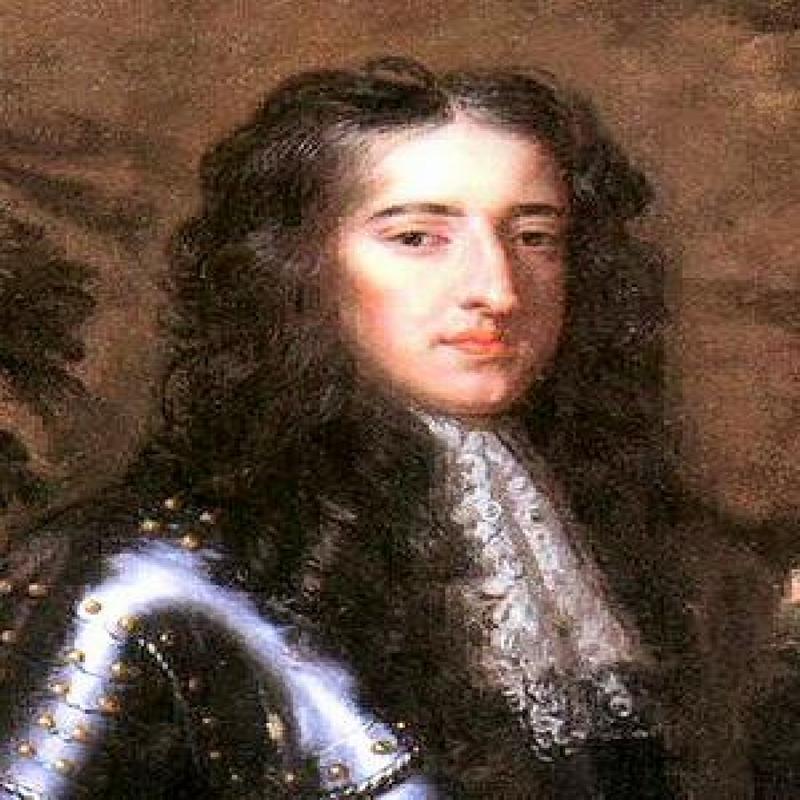 William, whose invasion had been delayed many months due to bad weather had little interest in being King of England and he was unsure of his decision to intervene. He was after all James’s nephew and son-in-law and had spent much of his young life at the Court of Charles II in London.
He could however see the strategic advantages of doing so. His Dutch Kingdom was in conflict with the forces of the Catholic King Louis XIV of France and he would rather have the powerful English Navy and its Army under his command than as an ally of his enemy as seemed likely.
His uncertainty sent palpitations through the heart of the English Establishment so much so that when at last a favourable Protestant Wind arrived his landing was greeted almost as a form of deliverance. 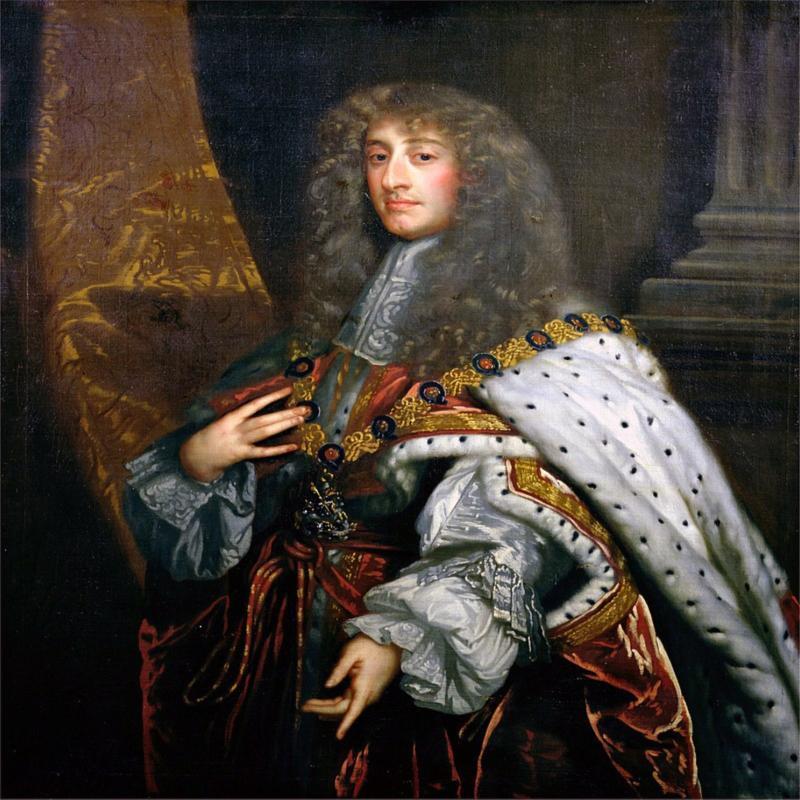 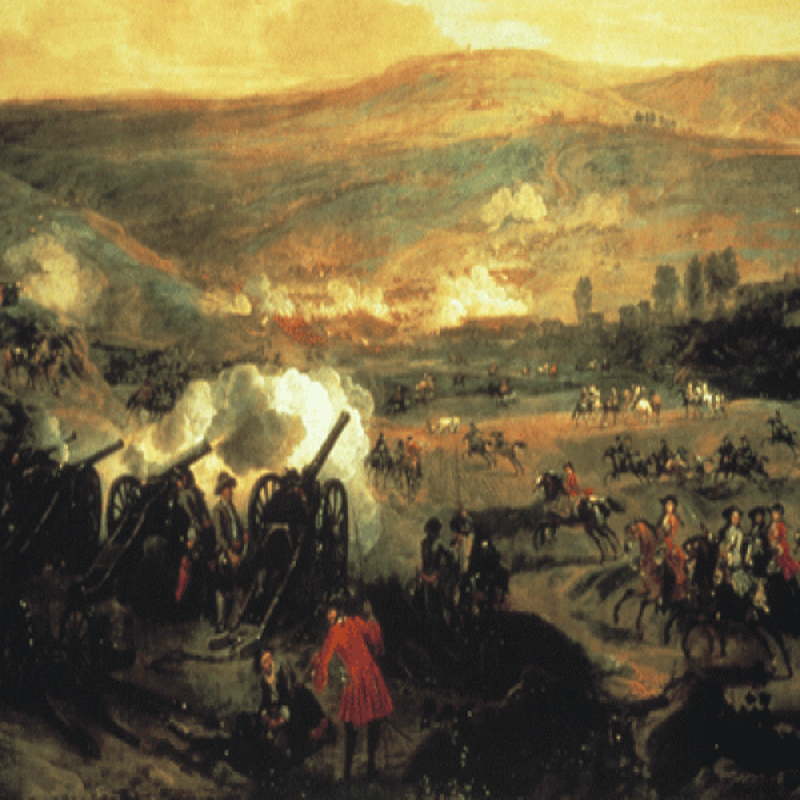 The ball which barely missed William's head ripped through his sleeve, grazed his shoulder and knocked him from his horse. The rumour quickly spread through the Jacobite camp that he had been killed but he was in fact uninjured and had merely picked himself up, brushed himself down and put the incident down to fate remarking, “Well, it could have been worse.” But it had indeed been a lucky escape.
Other than Oldridge there was one other place where the Boyne could be forded, Ros Na Ri some four miles to the west and James had already despatched some 800 men to cover this point. He hoped William lacked the local knowledge to be aware of it but the Prince of Orange had been as thorough as ever,
Late on the night of 30 June the Jacobites could hear movement in the enemy camp, it was the sound of marching feet. James believed that William was moving his army under the cover of darkness to Ros Na Ri and after holding an emergency Council of War he ordered his army to do likewise leaving only around 5,000 men to guard the crossing at Oldbridge.
James had blundered, for though William had indeed sent troops to Ros Na Ri it had only been a detachment of around 10,000 men. He had remained at Oldbridge with the bulk of his army.
William intended his troops to ford the river at Ros Na Ri wheel East and attack James’s exposed flank thereby threatening his line of retreat to Dublin. He knew that James would have to respond to such a move and divide his army but he hadn’t expected him to take the bait quite so thoroughly - the tactic had worked like a dream.
James did not arrive at Ros Na Ri with his army in time to prevent the William’s forces from fording the river even though the 800 men he had defending the south bank fought hard for over an hour under the inspired leadership of Neil O’Neill before he was killed and they broke and fled.
Having received news of the success at Ros Na Ri William after a brief but sustained bombardment ordered his elite Dutch Blue Guards to ford the river at Oldbridge.
The poorly armed Irish defenders stripped of most of their artillery and further hampered by the low-lying mist common at that early time of the morning and which shrouded the enemy from view could do little to prevent them. After a brief but furious hand-to-hand struggle the Irish abandoned their positions and dispersed to nearby hills. It seemed to William that victory was close at hand.
James had taken his veteran French infantry with him on his march to Ros Na Ri but had however left behind a contingent of French cavalry and they now stepped into the breach evacuated by the Irish as again and again they charged the Dutch lines pinning them to the riverbank.
Unable to make any progress and fearful that his favoured Dutch Guards might be wiped out a frustrated William ordered two more crossings to proceed further down the river in an attempt to thin out the French cavalry.
These were no more successful than earlier attempts to ford the river had been and William's men struggled to maintain a foothold but the French were taking heavy casualties and as their numbers diminished so did the frequency and potency of their attacks. In one charge alone only six of the sixty men who participated returned. Witnessing this William now took personal command leading 2,000 men in a final attempt to seize and secure the riverbank on the other side. 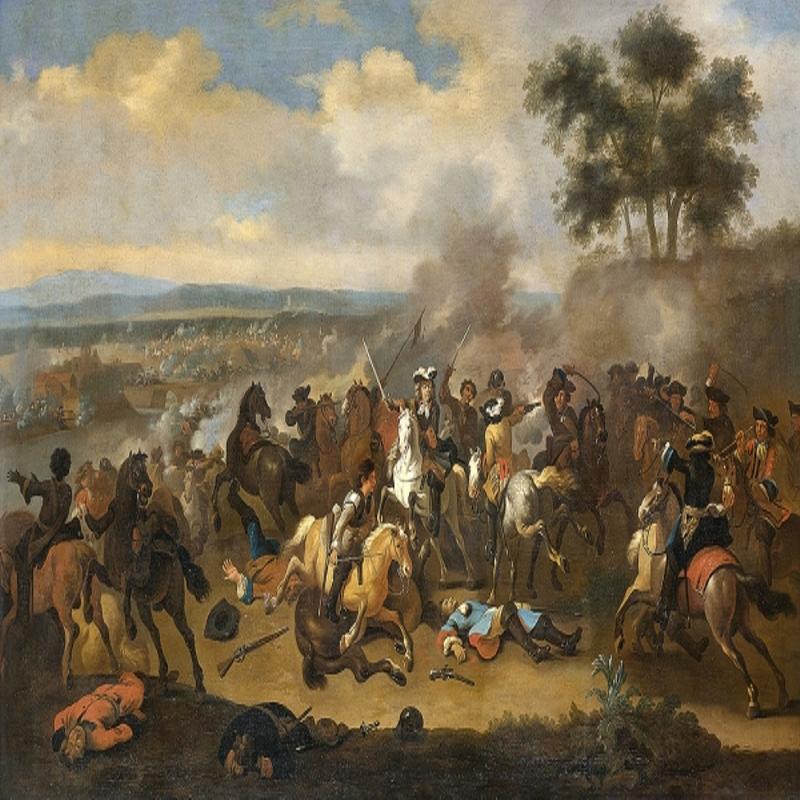 Inspired by the sight of their general in the thick of the action his men rallied and the battle at last began to swing in their favour even if William soon after suffered an asthma attack and had to be led from the field and carried back to camp in a blanket
.
The Irish who had been firing down on William’s troops from the hills now ran in great haste up a long slope to the churchyard at Dunmore with the enemy in hot pursuit. Here they would make a gallant last stand but outnumbered almost five to one it was hopeless. Those who had survived the fighting now retreated towards Dublin, screened by what remained of the French cavalry.
Whilst the battle was being decided at Oldbridge, James, camped just three miles away, did nothing. His army had confronted the William’s troops advancing from Ros Na Ri but an impassable boggy swamp had divided the two armies preventing them from engaging. As news of the events unfolding at Oldbridge reached him he simply waited as once more he was afflicted with nosebleeds and uncertain what to. Eventually, aware that the William was manoeuvring to cut off his line of retreat instead of rushing back to Oldbridge where the battle still raged he, along with a few subordinates abandoned the army and fled to Dublin.
Back in the capital James blamed his defeat at the Boyne on the cowardice of his Irish troops who he declared had run away. Upon hearing his words an Irish noblewoman present interrupted him to say: “If so, then they did not run as fast as you, for you are the first here.”
The casualties at the Battle of the Boyne were relatively light by the standards of the day and for the combined size of the two armies but not necessarily so for the actual numbers engaged. The Jacobites had lost 1,500 men of whom some 800 were killed while William’s army lost around 750 men with 350 fatalities.
Most of the Jacobite dead were Irish peasants who had enthusiastically volunteered to defend the cause of their King in Ireland. They had fought for eight hours against overwhelming odds whilst James less than an hour’s ride away did nothing to help them.
With the battle lost he made no attempt to rally his forces or ensure a well-ordered retreat, instead he abandoned them to their fate. He was known thereafter by the Irish, many of whom now deserted his cause, as Seamus a’ Chaca – James the Shit!
But why did James behave the way he did? He was after all, an experienced military commander who had proven his courage many times over in the service of his brother. His personal valour then had never been in doubt.
His chief advisors, Richard Talbot, Earl of Tyrconnel, and Alexander MacDonnell, Earl of Antrim were incompetents, whilst the Duc de Lauzon was to prove less effective than hoped but that’s why James had taken personal command. He had always been prone to despondency. Some have even suggested his indecision was the first signs of the dementia that was to overwhelm him in later life.
Despite most of his army never even being engaged at the Boyne and remaining intact James decided his cause was lost. Perhaps he was right for he had only ever viewed the conflict in Ireland as a stepping stone on his path to regaining his throne in England. He had no desire to be the leader of an Irish rebellion. After less than 48 hours in Dublin he made for the port of Kinsale and departed for France. Despite his absence the war was to continue in Ireland for another two years.
In early August the city of Londonderry was relieved after a siege of 105 days and though there had been little actual fighting the city was under constant bombardment and had come perilously close to starvation. More than 8,000 of its citizens had died mostly of disease and malnutrition and like the Battle of the Boyne itself the Siege of Londonderry has since become an epic of Protestant Irish history, and its battle-cry of “No Surrender” continues to echo down the ages.
With neither side able to secure total victory on 3 October 1691, the war came to an end with the signing of the Treaty of Limerick.
For William the war had never been about religion, he had merely wanted a peaceful and compliant Ireland so he could secure his position in England and more importantly retain Dutch independence in their on-going conflict with France. The terms he offered therefore were generous. Those Irish Catholic nobles who had been in rebellion were permitted to retain their titles and estates if they swore allegiance.
The Jacobite army was disbanded but those who wished to do so could follow James into exile and some 14,000 did so. Known as the Flight of the Wild Geese they were to go on and form the Irish Piquets and be assimilated into the French army. Some others were to enlist in William’s armygh but most simply returned home.
James lived out his remaining years at the grand palace of Saint-Germain-en-Laye just outside Paris that had been donated to him by Louis XIV. There he established a Royal Court in exile with ministers, military advisors and a retinue of servants. He appointed a shadow government and would tend to the business of administering a country he no longer had any authority over, reading dispatches from his agents in England and making appointments, but it was a barren existence.
He was totally reliant upon the generosity of the French King who no longer believing that James had the capacity to win back his Kingdom had withdrawn all further military support. It would be down to his children and grandchildren to keep the flame of Jacobite resistance burning.
James Stuart, former King of England died on 16 September 1701, aged 67, a bitter man..
Tagged as: Tudor & Stuart, War
Share this post: