Posted on 8th May 2021
At the age of just 17, having neither been recruited nor paid by any agency Belle Boyd became a spy for the Confederate Army. She proved to be brave, sometimes reckless and willing to seduce much older men to elicit information, a willingness to share the flesh that was to see her referred to as the Cleopatra of Secession.
Isabella Marie Boyd was born was born on 9 May 1844, in the town of Martinsburg, Virginia, an area of the State that was in fact to oppose secession and break away to form the pro-Union State of West Virginia.
Although her family were of relatively modest means they spent to provide a good education for their daughter but then with the proper marriage it was money they expected to be redeemed many times over.

Isabella was to prove a bright and intelligent young girl but one who preferred the rough and tumble of the outdoors to the dusty corridors of academic study, sewing circles and piano recitals lessons. In fact, she was never happier than when riding a horse, climbing a tree or pulling the hair of boys. Even so, by the time of her graduation she was deemed well mannered enough to be sent north to fulfil her parent’s ambition and find the well-heeled husband who would fit the polish.
She scrubbed up well and as the impeccable Southern Belle she impressed but with the young men distracted by the prospect of war there was to be no betrothal. She returned home disappointed and somewhat humbled by her failure to procure a husband but she had at least a new name – Belle.
Unlike most of their neighbours the Boyd family were enthusiastic supporters of the secessionist cause and flew the rebel flag outside their home. 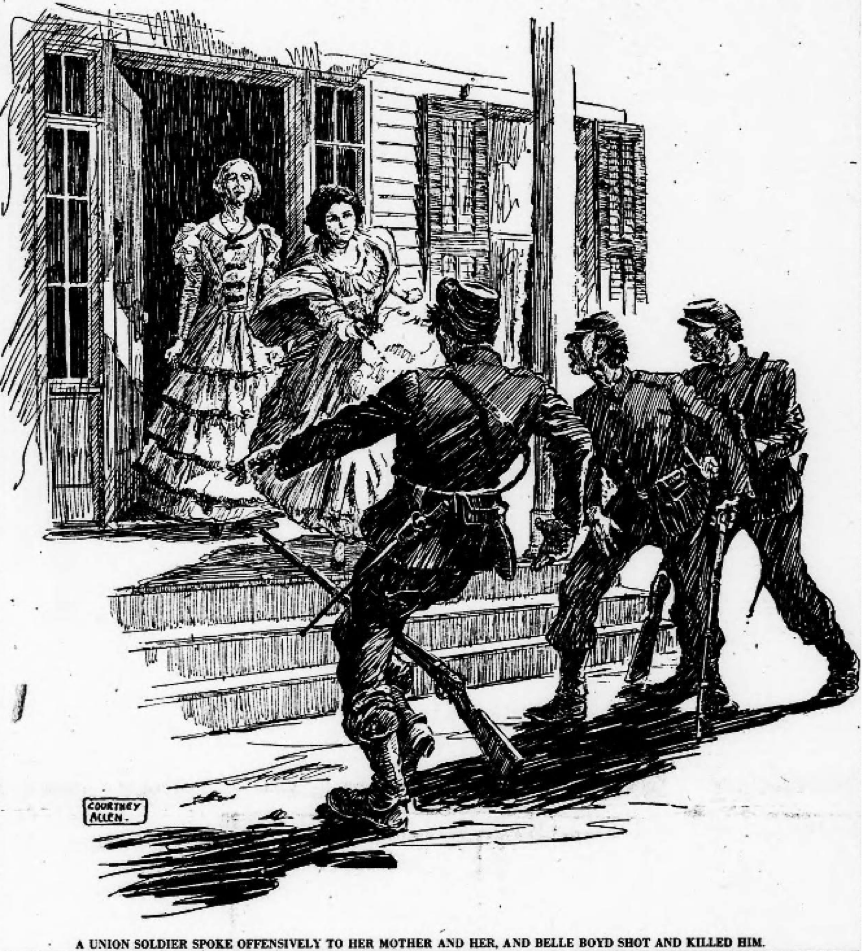 Partisan behaviour is never wise in a hostile environment and when and on 4 July 1861, Union troops arrived in town they tore down the flag and burned it. When Belle’s mother objected and tried to intervene she was first verbally abused before being knocked to the ground. Belle reacted to seeing her mother treated so by reaching for her father’s gun and shooting one of the soldiers.
She was arrested and brought before a Military Tribunal who exonerated her on the grounds that she had been provoked. Nonetheless, sentries were placed outside the Boyd home and they were for a time at least kept a close watch on.
Charming and coquettish Belle was not averse to flirting with the soldiers who enjoyed the attention and it wasn’t long before she was courting a Union Officer named Daniel Kelly.
Like so many before and since Kelly would be coaxed in-between those moments of coital passion into pillow talk revealing the secrets that might otherwise have been kept. Belle would listen intently before excusing herself a moment and hastily writing down these secrets whilst they remained fresh in the mind before returning to the bedroom as enthusiastic as ever for the fray.
These written notes she concealed in a hollowed out watch case which she gave to her slave Eliza to be taken under the cover of darkness to Confederate forces if they could be found.
Belle believed should they be stopped the troops would not search Eliza but in this she was mistaken. Intercepted by Union troops both Belle and Eliza were searched and the incriminating evidence found. Eliza was soon released but Belle was questioned and told that if found guilty of spying she would likely hang. In the end it was decided that she was just a young, foolish girl and she was permitted to return home - she had indeed been lucky.
Not long after the Boyd family moved to the more hospitable town of Front Royal in the Shenandoah Valley where they opened a hotel. Belle joined them a little later and finding a new arena of conflict soon found her arrest had done little to dampen her enthusiasm for espionage. 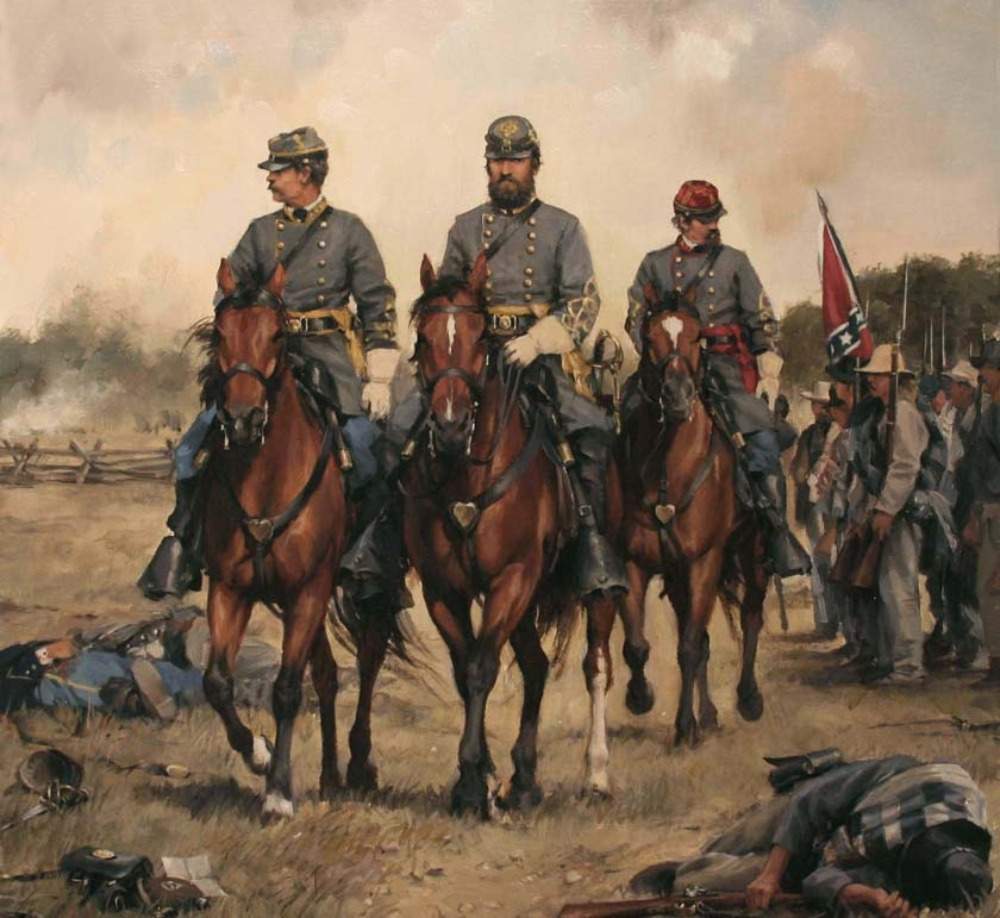 One evening in May 1862, Union General James Shields and his Staff met in the hotels parlour. Aware or the intended meeting Belle hid in the closet where she remained undetected as they discussed their plans in detail. Later that night she slipped out of town determined to find the Confederate Army of General Thomas ‘Stonewall’ Jackson having earlier procured the false papers that might should she be discovered save her life.
As it was she evaded the Union pickets but in doing so became lost and stumbling about in the dark was starting to panic when she fell upon the cavalry of Colonel Ashby Turner.
She blurted out her information – General Shields planned to march his army from Front Royal leaving only a token force behind. The town was undefended, it was there for the taking – General Jackson must come at once!
Stonewall Jackson’s ‘Valley Campaign’ in the spring and early summer of 1862 has since become a masterpiece of military strategy as in a series of forced marches and lightning hit and run attacks he bemused and totally out-manoeuvred four Union armies all larger than his own. By doing so, he prevented them from reinforcing General George McClellan’s proposed, march on Richmond and secured the Shenandoah Valley with its vital grain supply for Robert E Lee’s Confederate Army of Northern Virginia. But without the information provided by Belle Boyd it might never have happened at least not in the manner it did. 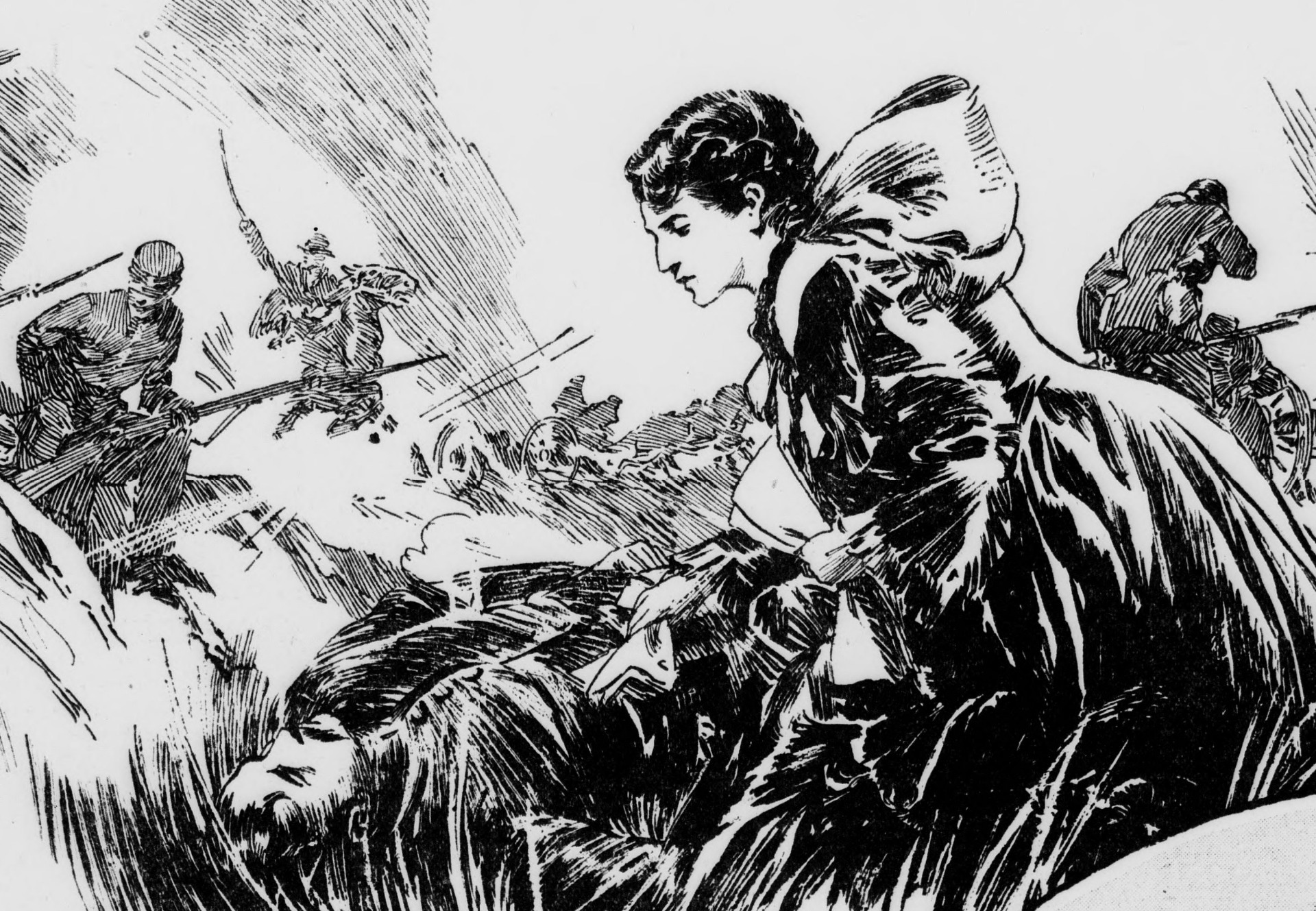 On 23 May, Jackson’s entire army 14,000 strong converged on Front Royal. As they did so Belle ran out to greet them shouting as bullets tore through her skirt – the Yankees are very few, charge now and you will catch them all. Jack son did just that and following a short, sharp engagement more than a thousand Union soldiers were taken prisoner.
So impressed was the usually phlegmatic Jackson by the tenacity and courage of this young woman that he pinned a note to her dress: “I thank you for myself and for the army, for the immense service you have rendered your country this day.”
Belle continued her spying activities but was soon betrayed by a lover who publicised her activities spreading her fame far and wide. Not long after she was arrested on the express orders of the U.S. Secretary of State Edwin M Stanton.
On 29 July, she was taken to Washington and confined in the Old Capitol Prison where she was interrogated and kept under close surveillance. The New York Tribune wrote of her: “Wearing a Rebel soldier’s belt around her waist, and a velvet band across her forehead with the seven stars of the Confederacy shedding their pale light the only additional ornament she required to render herself perfectly beautiful was a Yankee noose encircling her neck.”
But Belle remained defiant: “If it was a crime to love the South, its cause and its President then I am a criminal. I would rather lie down in this prison and die than leave it owing allegiance to a government such as yours.”
Remarkably given her profile she once again got lucky when she was taken south as part of a prisoner exchange, a bi-lateral arrangement that would later cease.
She was eager to resume spying but was soon captured again before mistakenly being released and allowed to return to Richmond.
It seemed she had have nine lives but it was the case she was now too well known to continue her activities for by doing so she posed a danger not only to herself but also those who worked with her.
As a reward for her efforts in early 1864 she was sent to England as an advocate for the Southern cause but her ship, the blockade-runner Greyhound, was intercepted mid-Atlantic and Belle was taken captive before being released upon the ship’s arrival in Canada.
She remained determined to complete her mission however, and embarked once more for the journey to England. Upon her arrival she settled in London before beginning a lecture tour where she argued for Southern independence and urged her audience to recognise the Confederacy and to lobby their Government to do the same. She also married a Union Naval Officer Samuel Wylde Hardinge who had earlier taken her prisoner. She persuaded him to change sides and he appeared briefly alongside her on the London stage where she had taken to performing the Southern Belle to help finance her stay.
Following the death of her husband Belle returned to America and a defeated, war-ravaged South where heartbroken at the sight of destroyed farms, abandoned plantations and horrified to see freed slaves in uniform patrolling the streets of Southern towns she simply couldn’t bear it and so moved to the North.

Belle was to marry two further times but nothing in her life ever came close to those heady days that were the early years of the Confederacy.
In 1867, she published her memoirs ‘Belle Boyd, In Camp and in Prison’ and sales of the book were to provide her with some security and a little fame which she was more than prepared to exploit.
In truth she could never escape her past but then she never really wished to and every year would embark upon a lecture tour but rarely in the South where the collective memory of the war was one of humiliation and defeat. Instead she spoke to her erstwhile enemies who triumphant were willing to listen to tales of derring-do from those they had vanquished.
On 11 June 1900, in Kilbourne City, Wisconsin, where she was due to speak to Union veterans Belle had a heart attack and died. She was 56 years of age.
The Confederacy had not issued medals and decorations declaring that all those who served were already patriots and heroes but in 1898, the recently formed United Daughters of the Confederacy awarded Belle Boyd their highest decoration, the Southern Cross of Honour.
Tagged as: Miscellaneous, Women
Share this post: