Posted on 9th August 2021
Belle Starr is one of the most famous women to emerge from the Wild West and like others such as Calamity Jane, Annie Oakley, Pearl Heart, ‘Big Nose’ Kate Horony and indeed all the legends of that era her life is a mixture of fact and fiction, of manipulation and exaggeration but then a seed must be sown before its harvest can be reaped.
She was born Myra Maybelle Shirley in the town of Carthage, Missouri on 5 February 1848. Her mother was a Hatfield of the notorious Hatfield and McCoy family feud while her father was a successful businessman who owned a livery stable and a local saloon so it was that the young Maybelle benefited from a comfortable upbringing attending the Carthage Female Academy where she received an education in music and the classics.
Missouri however, along with the other Border States, had been embroiled in a bitter struggle over the issue of slavery long before the United States descended into Civil War following which it became a region of vicious and fratricidal tit-for-tat killing that would tear it apart.
The Shirley family were unequivocal in their pro-slavery sentiments and Belle had been friends with both the James and Younger brothers since childhood, indeed her brother John was to fight alongside them as a partisan guerrilla before being killed in an ambush in 1864. 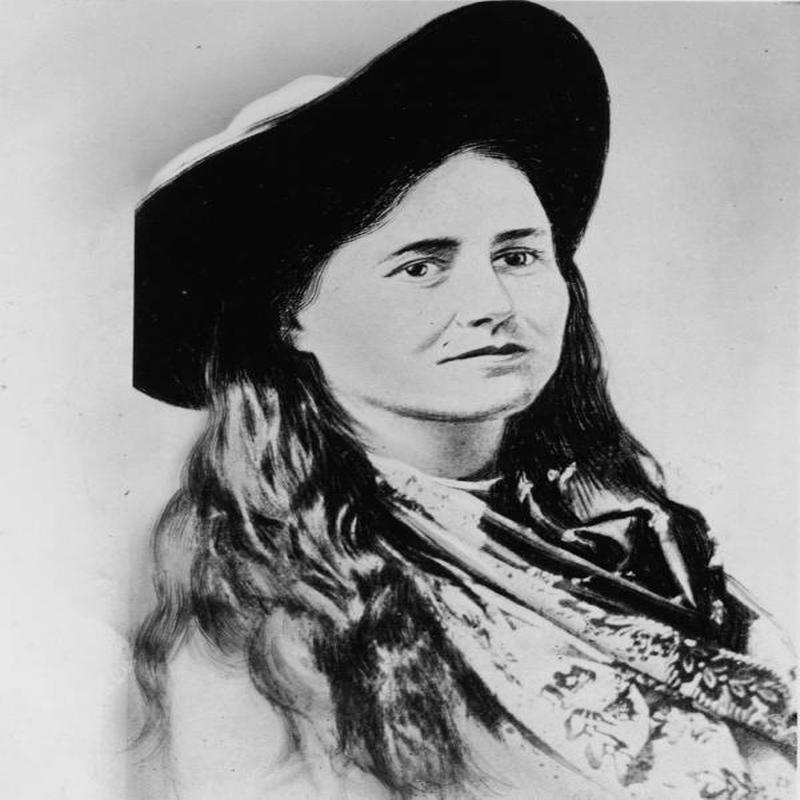 Belle found the war thrilling and would ride out to watch Union troop movements reporting what she had seen to John, information that was put to particularly good effect on 5 July at the Battle of Carthage when the Missouri State Militia thwarted an incursion by Union forces. This was just the beginning however, and Carthage was to be fought over many times until finally occupied by Union troops in October 1863.
As if life under occupation wasn’t uncomfortable enough for the Shirley’s a raid by Confederate guerrillas in October 1864 that was too see much of the town torched was to prove the final straw. Missouri had not only become a dangerous and lawless place but a Union clampdown on Confederate sympathisers had made life intolerable and so Belle’s father decided to move the family to Sycene in Texas for their own safety.
Texas was to become the favoured destination of those Confederates fleeing possible retribution after their defeat in 1865, and the Shirley family were soon joined by their old friends the James and Younger boys along with many other ex-guerrillas eager to turn to banditry not only for personal gain but as a way of continuing the war by other means.
In 1866, Belle married one of those ex-guerrillas, Jim Reed, a man who had been known to her for some time. It seemed a successful marriage despite Jim’s long absences and it being rumoured that their daughter Pearl was in fact the child of Cole Younger, something that Belle would later herself confirm.
Belle and Jim soon moved to Oklahoma and Cherokee Indian Territory and it was here that she first encountered the Starr family notorious locally as horse thieves, cattle rustlers and distillers of illegal hooch.
In 1869, Belle was forced to flee when her husband Jim shot dead a man in cold blood and with the law closing in they were made to do so again two years later this time to Texas where they could be protected by family and friends. By this time Jim, who had declined an offer to join the James/Younger Gang had formed his own and in 1873, Belle accompanied them when they robbed a wealthy Cree Indian farmer Walt Grayson of $30,000 in gold coins. Now wanted felons in Texas as well as elsewhere the family split up with Jim hiding out in the town of Paris whilst Belle and her children Pearl and Eddie moved to Dallas. 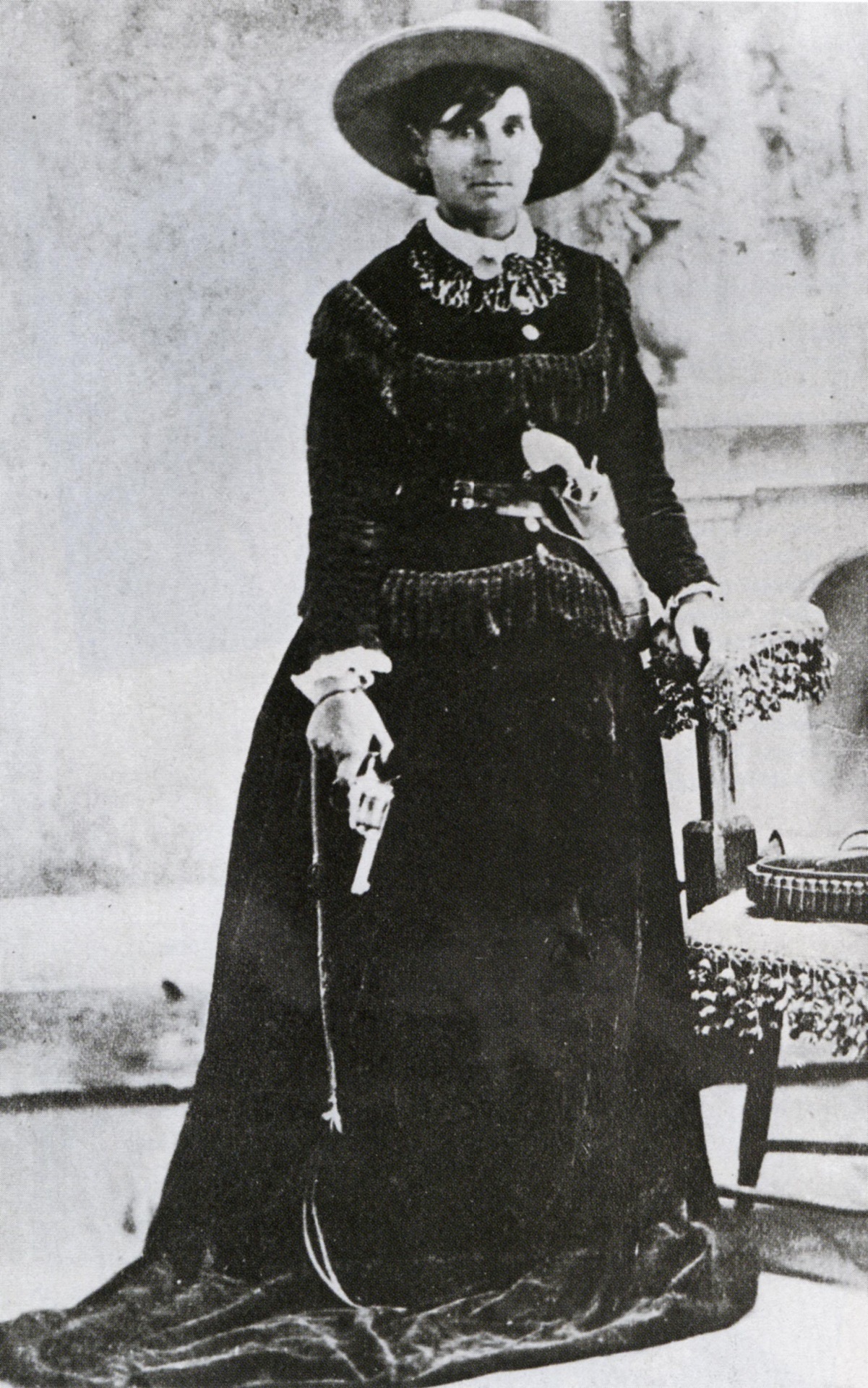 Here Belle lived extravagantly off her share of the proceeds from the robbery, a lavish lifestyle that was reflected in the way she dressed – knee length leather boots, figure hugging jackets, black velvet skirts and a hat sometimes adorned with ostrich feathers. She soon became a familiar figure in the local saloons where she played poker and regularly drank too much. It was said that at the end of a night of heavy drinking she liked nothing more than to ride through the town firing her pistols into the air with little regard for anyone that might get in the way. Her behaviour brought her a great deal of attention which she no doubt enjoyed but it also endangered her liberty.
In April 1874, Jim Reed emerged from hiding to intercept and rob a stagecoach on its way to Austin. It was perhaps a little too soon for it alerted the Authorities to his presence and not long after he was tracked down to his hideout where refusing to surrender he was shot dead.
Upon learning of Jim’s death and that a warrant had been issued for her arrest Belle had little time for mourning and leaving her children with relatives fled to Arkansas where she renewed her acquaintance with the Starr family soon immersing herself in their criminal activities planning cattle rustling raids and bribing law officers, it being said that where she could not bribe she would seduce.
In 1880, she cemented her relationship with the family by marrying Samuel Starr.
Judge Isaac Parker, known locally as the Hanging Judge, had taken a particular dislike to the loud and flamboyant Belle and was determined to bring her to justice – it was to prove easier said than done. Nonetheless, in 1883 she was arrested over the theft of a horse and sentenced to a year in prison. It was a victory of sorts for Judge Parker but much to his irritation Belle was to prove a model prisoner and was released for good behaviour after just nine months, and she was soon to become the bane of his life boasting upon her release: “I am a friend to any brave and gallant outlaw.” Such comments only ensured the constant attention of the law and with barely any crime committed locally that she was not rumoured to have been involved with she was arrested many times but always released without charge due to a lack of evidence. 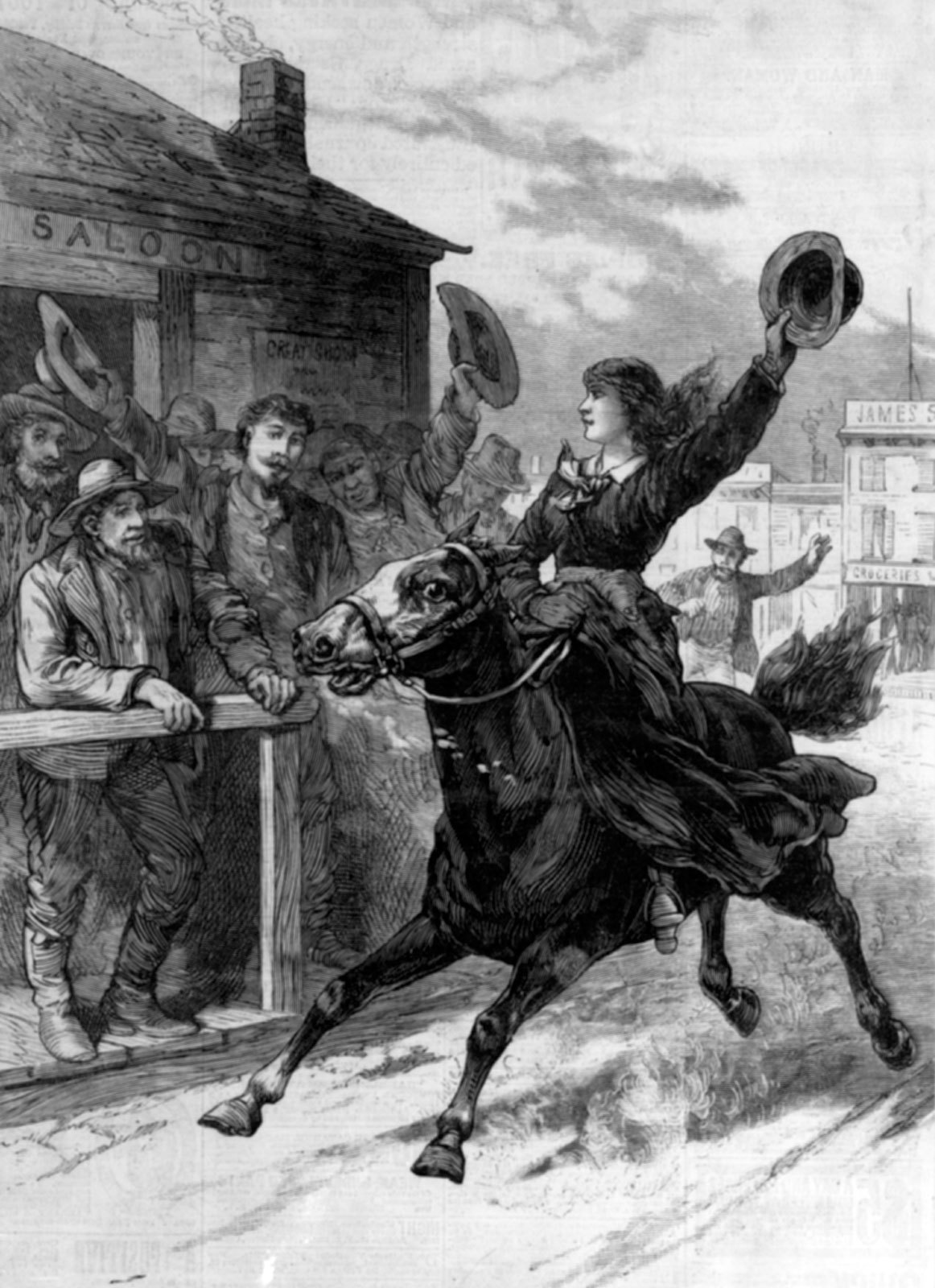 In 1886, she was reported to have robbed a Post Office and Store at the head of her own gang while dressed as a man. The story caused a sensation but whilst those present were willing to identify the culprit as Belle to reporters they would not do so to Law Enforcement Officers, and would certainly not testify in Court to that effect. It was yet further frustration for Judge Parker made worse by the fact that such stories were grist-to-the-mill of the popular press and dime novels of the day which were now regularly referring to Belle Starr as the Bandit Queen. But then if he could not get Belle he would bring to justice those associated with her.
Her husband Sam Starr would not be one of them however, not long after the robbery at the Post Office he was shot dead during a drunken brawl over money.
When a friend of hers, a Cherokee Indian named Blueford Duck was arrested for the murder of a farmhand Belle paid the legal counsel for his defence who on appeal managed to get the death sentence passed by Judge Parker commuted to life imprisonment.
Again in 1888, the same year as she married Sam’s brother Jim Starr, her son Eddie was arrested for horse theft and sentenced to seven years imprisonment by Judge Parker.
Belle claimed that the evidence against Eddie had been fabricated by the Judge to get back at her and amid much publicity she organised a letter writing campaign and petition for his release that garnered such support its momentum took it all the way to the White House and the desk of President Grover Cleveland who ordered that the case be reviewed resulting in Eddie later being pardoned.
It seemed that the law had no answer to the Bandit Queen and the popular press lapped it up. 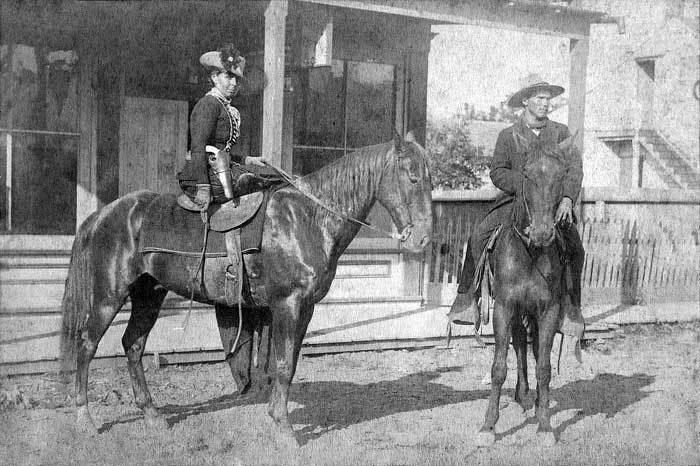 Truth and fiction were often blurred but it was real enough to satisfy the public imagination and her legendary status would only be enhanced further by the mysterious circumstances of her death.
On 3 February 1889, returning home alone from a trip to the General Store in nearby Briartown, Belle was waylaid at an isolated spot and shot in the back at close range. As she lay upon the ground she was shot again in the face. It was rumoured that the weapon used had been her own shotgun and that she must therefore have known her killer but this cannot be proved but it was clear her killer was taking no chances.
Speculation persists as to who may have been responsible: was it Judge Parker taking the law into his own hands? Others believe the fact her face was targeted even after death indicates a woman, a jealous rival perhaps. It has even been suggested that it was the result of a family feud and that her son Eddie had decided to rid himself of his domineering mother. Maybe, she was herself the victim of a robbery?
But in truth Belle, and the Starr family she married into had accumulated so many enemies over the years the suspects are too numerous to detail. But it was her fate and the fact the case remains unresolved to this day that sealed her legend, as death so often does.
Tagged as: Miscellaneous, Women
Share this post: