Boudica: Warrior Queen of the Iceni

Posted on 19th March 2021
Boudica (also known as Boedicea) is the woman whose image upon a a chariot spear in hand has come to represent English defiance in times of mortal danger. Her statue overlooks the Houses of Parliament and whenever England is in peril we evoke memories of this woman of and her rebellion against the mighty Roman Empire when scourged and humiliated by those she once thought friends she took her revenge.
Boudica’s who was was in her late thirties at the time of the rebellion was married to Prasutagus, the King of the Iceni Tribe which dominated much of East Anglia.
When in AD 43 the Romans conquered most of southern England, Prasutagus chose to collaborate with rather than oppose the invaders for which cooperation he was permitted to retain his Kingdom; and the Romans were pleased with their new ally who diligently collected their taxes and provided them with slaves for which he was handsomely rewarded.
Just prior to his death Prasutagus made a Will in which he divided his wealth and property equally between his family and the Emperor Nero. As the Roman historian Cassius Dio explains:
“Prasutagus, the late King of the Icenians, in the course of a long reign had amassed considerable wealth. By his Will he left the whole to his two daughters and the Emperor in equal shares, conceiving, by that stroke of policy, that he should provide at once for the tranquil repose of his family and Kingdom.” 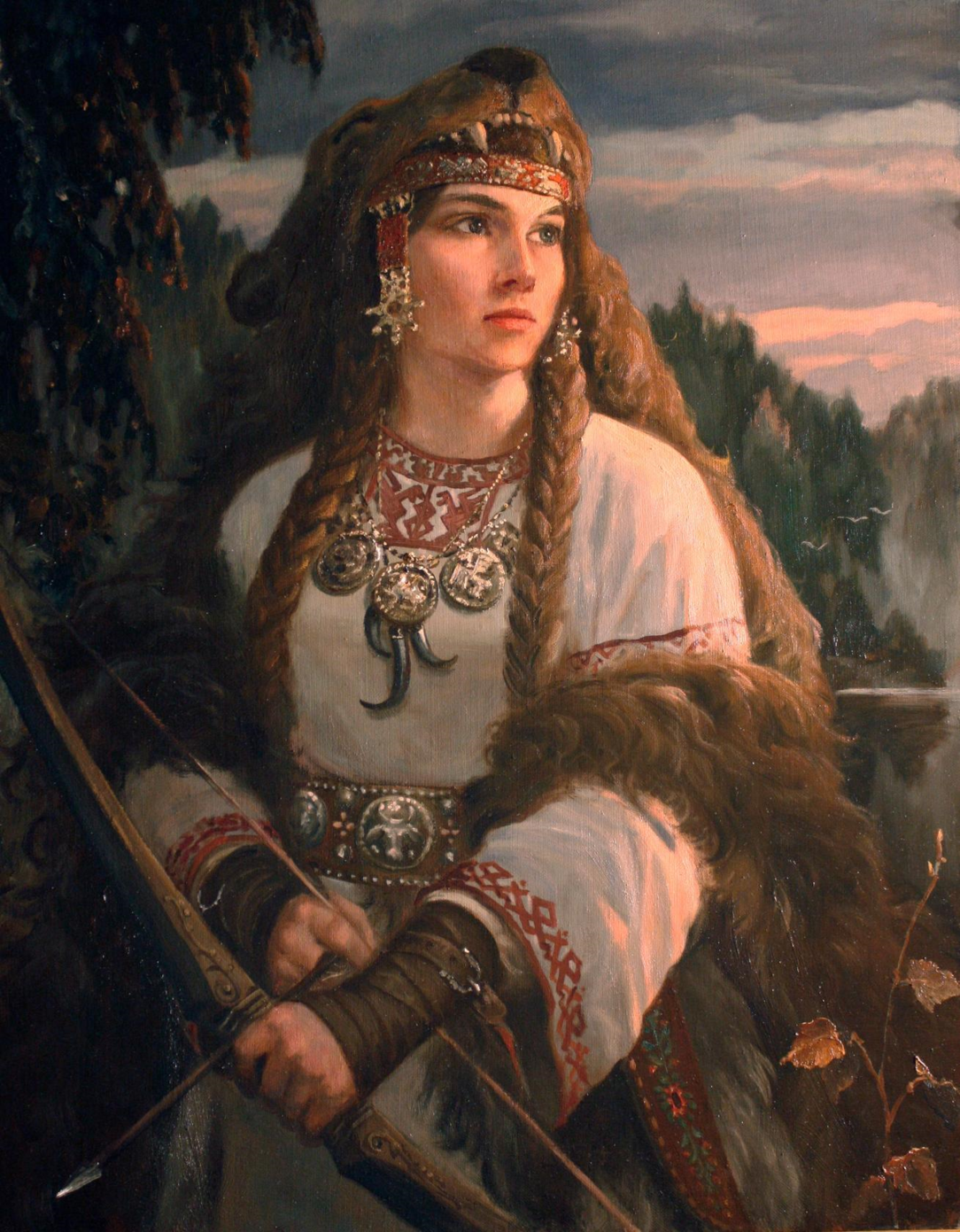 The division of his fortune seemed reasonable enough and there was no reason to believe that his wife Queen Boudica would be any less compliant than her deceased husband had been. But the Roman Governor Paulinus Seutonius, a brutal and insensitive man with pretensions well above his station simply dismissed Prasutargus’s Will. As far as he was concerned when the old King died his Kingdom died with him and as such all that had belonged to the Iceni now belonged to Rome.
The mere fact that a woman now stood at the head of the tribe merely indicated their weakness and lack of manly virtue - there was nothing to be feared from the Iceni.
When Seutonius arrived at Boudica’s capital to take what he believed forfeit to Rome she complained at his high-handed attitude, his lack of respect and denied his right to lay claim to what was not his, Seutonius in response had her stripped, bound, beaten and whipped. He then forced her to watch as her two young daughters were publicly raped. Other members of the Royal Family he had arrested and sold into slavery. He then departed with his troops believing he had nipped in the bud the threat of further defiance on the part of these troublesome Celts.
Seutonius saw it as his mission to suppress and eradicate Celtic culture and its religion from the Island of Britannia so he now took the bulk of his army to Anglesey in Wales, the last remaining Druidical stronghold, intent on annihilating them once and for all. He did so confident that he had ended the last vestige of resistance in England itself. It never dawned on him that rather than end the prospect of rebellion his heavy-handed treatment of the tribes had guaranteed it.
Boudica was not a Roman woman who saw her place in the world as one of obedience. She was a Celt, and moreover she was a Queen of the Celts and she was not willing to stand by and allow her own humiliation and that of her children to go unpunished. She railed against Rome, vowed vengeancedf and the outraged Iceni rallied to her cause. She was to be joined in her rebellion by other tribes such as the Trinovati and Carnovii tired of the heavy taxes levied upon them and the regular confiscation of their property. Together they marched south gathering numbers as they went.
It is difficult to know the number of people involved in Boudicca’s rebellion. It has been suggested that it may have been as many as a 100,000 but this seems unlikely given the difficulty in logistics of transporting and feeding so many people, though no doubt her army was swollen by local population’s hell bent on looting and personal vengeance as they passed through. The likelihood is that it numbered no more than 30,000 many of whom were not warriors at all but women, children, camp-followers and priests. It wasn’t uncommon in Celtic warfare for the entire family to go on campaign or even for an entire village to do so.
As Boudica’s forces descended upon the Roman capital at Camulodonum (Colchester) the 9th Legion was sent to intercept them. It would seem that they marched straight into a trap for in a furious but short engagement they were wiped out almost to a man with only a few cavalry managing to escape. Forewarned of the impending attack most of the populace of Camulodonum abandoned the city. Even so Boudica burned it to the ground and massacred any unfortunate enough to have remained behind. 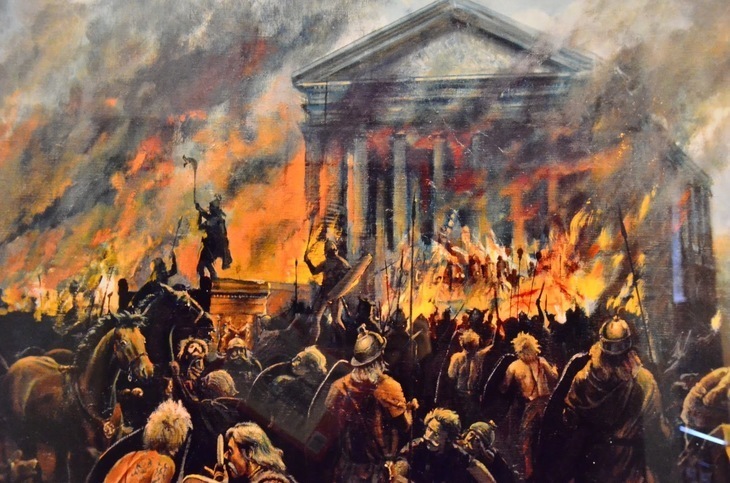 Boudica fell upon it with a vengeance and in an orgy of violence lasting for several days her army slaughtered thousands, Romans and Britons alike, and put to the torch every building they could.
Boudica now headed north determined to destroy every Roman settlement, to kill every Roman and every Briton who collaborated with them. It seemed that with every killing, every massacre her bloodlust and desire for vengeance only increased.
The next town in her path was Verulanium or St Albans. It lay undefended and it was said that she descended upon it with a fury slaughtering its inhabitants in the most vile and bestial ways.
Boudicca took no prisoners and she was not interested in the capturing and selling of slaves, only in death by gibbet, sword, and fire and a particular target of her vengeance were the women of the Roman Nobility. These she would order to have their breasts cut off before impaling them alive as their distraught children looked on before they too were killed.
The slaughter at Verulanium had been so great and so vile that Seutonius was at last forced to act.
There was to be a decisive confrontation though no one knows exactly where. Seutonius’s army was smaller than Boudica’s but it had the advantage of being just that, an army. 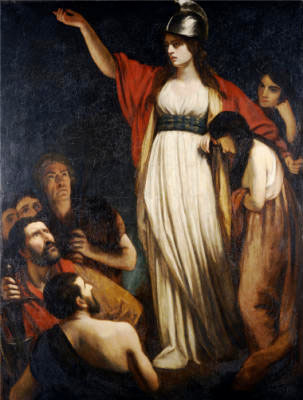 Boudica’s forces were a multitude of people possibly swollen by now to unmanageable numbers, a rag-tag collection of old men and small children, Druids and camp whores. Many of her warriors were women and some of the men now expressed their concern for their families and wished to avoid confrontation. Before the final Boudicca addressed her army. Cassius Dio describes what happened:
“She stood upon her chariot, spear in hand, a frightful sight and spoke:
“I am avenging lost freedom, my scourged body, and the chastity of my daughters. Behold the proud display of warlike spirits, and consider the motives for which we draw the avenging sword. On this spot we must either conquer or die with glory. There is no alternative. I am a woman but my resolution remains firm. You men can either fight or die.”
They did indeed fight and they were to die in their thousands, for as the battle progressed the Briton’s were forced back onto their wagon train where the many young, old, sick and those unable to fight were.
The crush around the wagons was so intense and unable to effectively wield their weapons or manoeuvre fighting became impossible and they were surrounded and systematically cut down. The battle quickly became a massacre. It was a catastrophic defeat from which there was no hope of recovery.
Boudica escaped the fighting and returned home where a few days later she is believed to have taken poison along with her daughters to avoid falling into Roman hands.
Boudica remained defiant to the end, and though she may have failed to liberate Britain from the yolk of Roman rule she had avenged herself, her family, and her people many times over.
Tagged as: Ancient & Medieval, Women
Share this post: