Posted on 16th January 2021
Caligula is one of a litany of deranged wearers of the Imperial Purple and arguably its most infamous, a man whose name has become a by-word for excess, cruelty and the corrupting influence of power. But was he wicked, mad or merely a young man so out of his depth that he could be the master of the known world one moment and a lonely, frightened child the next. He had after all lived in fear his entire life, his mother he had seen humiliated and exiled, his two brothers murdered. He would then, be close to his sisters, the only people he thought he could trust.
The future Caligula was born Gaius Julius Caesar Augustus Germanicus on 31 August AD 12, in Antium on the west coast of Italy. He was the third son of the popular war hero Germanicus and the adopted son of the Emperor Tiberius.

His mother was the ambitious and headstrong Agrippina, the daughter of the former Emperor Augustus's right-hand-man Marcus Vipsanius Agrippa, the victor of the Battle of Actium that had foreshadowed the downfall of Cleopatra, Mark Antony and the Roman Republic. She and her husband sat at the very heart of the Imperial Family, and that was a dangerous place to be.
As a young child Gaius would accompany his father on his military campaigns where dressed in a miniature uniform with a sword, armour and soldiers boots he had the run of the camp where much to the amusement of the troops he would imitate their mannerisms. They very quickly took him to their hearts and named him affectionately Caligula or Little Boots.
His happy childhood was brought to a premature end in AD 18 when his father died in mysterious circumstances following a dispute with the Governor of Syria, Gnaeus Calpurnius Piso. 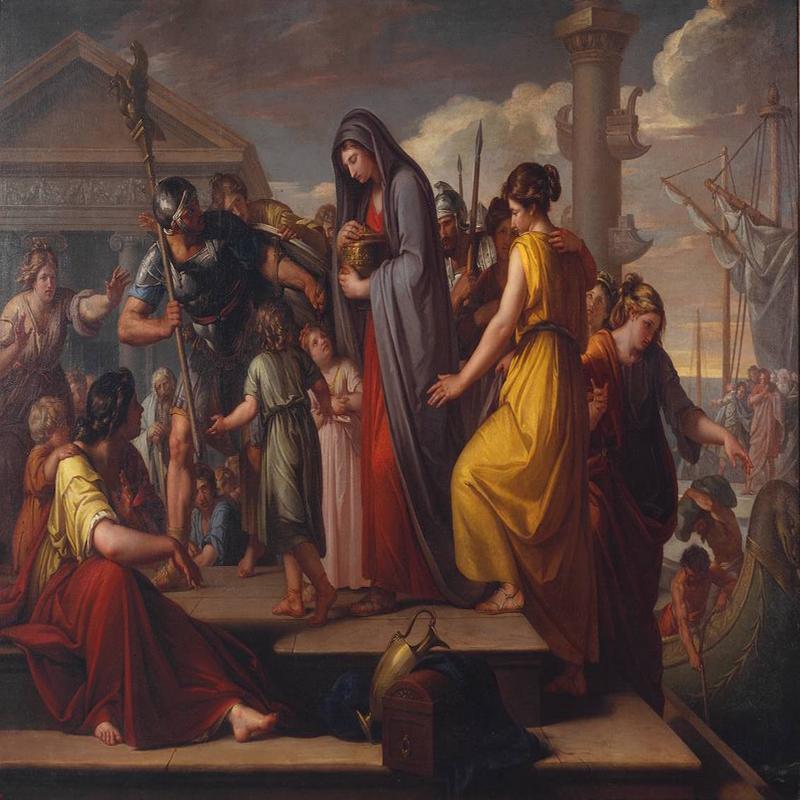 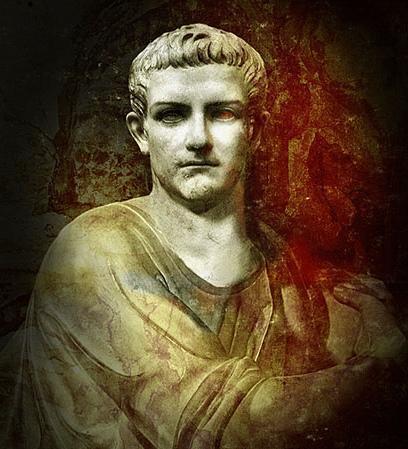 Caligula’s appointment as Emperor still had to be endorsed by the Senate but there was to be no dissent as he addressed those present pledging to uphold the laws and customs of Rome and vowing to be nothing more than their devoted servant. He was their son, he said, and he would be as obedient as any son would be to his father.
The Senators were thoroughly seduced, this was after all a son of Germanicus and Romans believed that sons inherited the character and values of their father. They granted him absolute power, the first time they had ever done so, and at the age of just 25, with no political experience and having spent most of his adult life in isolation on Capri, Caligula had become the most powerful man in the world.
He was proclaimed Emperor on 28 March AD 37, to wild scenes of public rejoicing. The crowds lining the street chanted his name and referred to him as "Our Baby" and "Our Star". Rome was in ecstasy and it is said that more than 150,000 animals were sacrificed in his honour during the first few months of his reign.
The first thing he did was to declare the Treason Trials over and had the documents relating to them publicly burned. He then reduced taxes for all and put on the extravagant games so beloved of the people. But he also somewhat ominously raised the pay of the army and the Praetorian Guard.
Early in his reign he had a pontoon bridge built across the Bay of Naples from Baiae to Puzuolli, a distance of more than two miles. He had done this to disprove a famous prediction made by Tiberius's astrologer Tracyllus that Caligula had no more chance of becoming Emperor than of crossing the Bay of Naples on horseback. Now he would show the world that he could do both and dressed as a gladiator and riding his favourite horse Incitatus he rode more than two miles out to sea on a narrow bridge. It was an outrageous act of bravado and the people loved him for it, even more so as everyone knew he could not swim and that night he had the bridge lit by torches so that it could be seen for miles around. 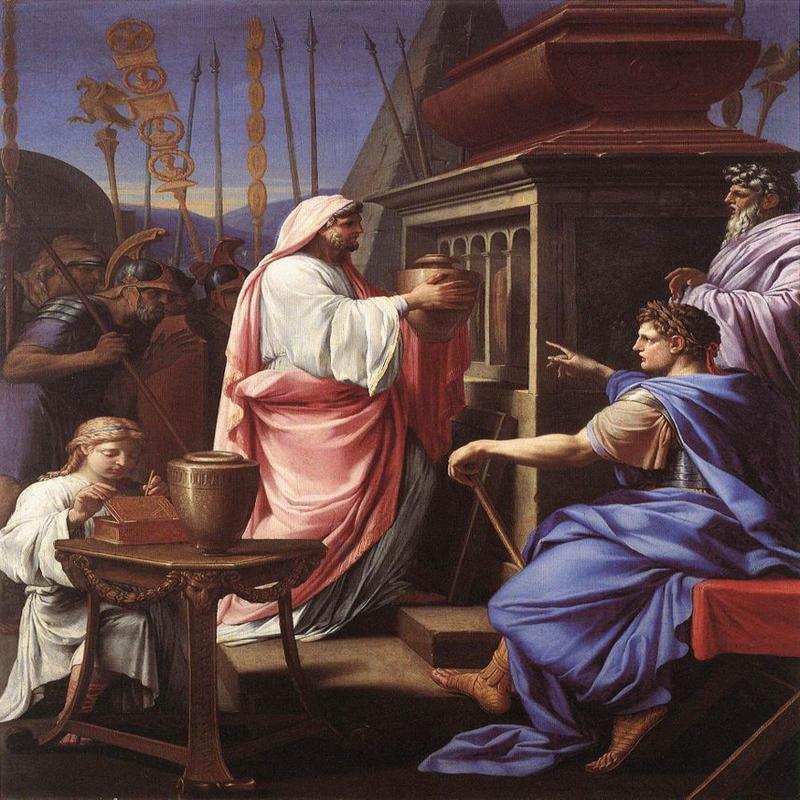 In late AD 39 he opened a brothel in a wing of the Imperial Palace and forced the wives of Senators to attend and prostitute themselves. He also employed other members of the Imperial Family to take the money on the door; his own wife, and the mother of his child, Caesonia, whom he appears to have been genuinely fond of he would force to strip naked so that he could show her off to the soldiers of his Personal Guard.; his horse, Incitatus, for whom he had built a marble stable in the Imperial Palace itself he would have dine with him and invitations to dinner were sent out in his name. Eventually he would make Incitatus a Senator and expressed the wish to have him elected Consul.
In a little over 18 months, Caligula had completely alienated himself from the Roman political elite. He was no longer loved but hated and the rich and powerful would often tremble with fear when brought into his presence. Of this he cared little declaring: "I do not care if they hate me, as long as they fear me." He also knew full-well that he remained popular with the people who took delight in his humiliation of their social betters.
Caligula had a caustic wit for sure and a playful nature no doubt neither of which were as readily appreciated as he might have hoped. He once said of himself, "I admire nothing more about me than my shameful impudence." And for all his murders, cruelties, and bizarre antics it was to be his shameful impudence that was to lead to his downfall.
People rarely knew when to take Caligula seriously until it was too late. It irritated him when people begged for their lives when he was only teasing them, and he would become angry when they did not laugh at his jokes. But one man always took him seriously and that man was Cassius Chaerea, the Commander of the Praetorian Guard.
Cassius Chaerea was recognised as a brave soldier who had served alongside Caligula's father Germanicus but he had a weak reedy voice and an effeminate manner. Caligula teased him mercilessly over this and he became the butt of the Emperor's jokes, but Cassius Chaerea did not see the funny side. When Caligula referred to him as that Big Girl he would become visibly riled and the angrier he became the more Caligula teased him. When he asked for the Watchword of the Day, Caligula would respond with Venus, the impotent God of femininity, or opt for a phrase such as - Give us a kiss! Cassius Chaerea did not see the funny side rather he was thoroughly humiliated and consumed with the desire for revenge.
Throughout Caligula’s short reign there had been numerous plots and conspiracies against him, some imagined, others not. But the man who had been hailed as the Saviour of Rome was now the most detested tyrant in its history. He was feared by everyone who counted and none of them no matter how rich or powerful could sleep soundly in their beds as long as he remained Emperor - It was only a matter of time before one of the plots succeeded.
On the morning of 24 January AD 41, Caligula was attending a series of Games that had been organised in celebration of the Divine Augustus when during a lull in the proceedings he was persuaded to review a troupe of young male dancers. It took little persuasion to convince Caligula to look upon scantily clad semi-naked young boys but his German Guard would also be in attendance as usual.
As he entered a corridor beneath the Arena the doors were quickly closed behind him temporarily separating him from his guards. As he turned around to see what was happening Cassius Chaerea stepped forward and thrust his sword deep into the Emperor's chest. Caligula screamed in terror and cried out that he could not be killed he was a God!
Numerous humiliated Senators and cuckolded husbands now appeared eager to finish him off. He was stabbed a further 30 times as his screams rent the air and his guards desperately tried to break down the doors. By the time they did so it was too late - their Emperor was dead.
Caligula's German Guards responded to his death by killing just about anyone they came across whether they had been involved in the conspiracy or not. Upon hearing the news of his assassination the people besieged the Forum demanding justice for his killers. The conspirators meanwhile had also embarked upon their own killing spree determined as they were to eliminate what remained of the Imperial Family and return Rome to a Republic. Caligula's wife, Caesonia, was raped and then stabbed to death. His baby daughter, Julia Drusilla, was taken by her ankles and had her brains bashed out against a wall. – the conspirators however had failed to find Caligula's uncle Claudius.
He had been discovered hiding behind a curtain and spirited away to safety by some of the Praetorian Guard who now fearing for their own safety proclaimed him Emperor. The conspiracy which had hoped to restore the Republic now collapsed as the mob on the street greeted the pronouncement with enthusiasm.
Cassius Chaerea and the other conspirators were taken prisoner and Claudius was to show them no mercy. He ordered their immediate execution even though he had been as much afraid of Caligula as the next man. Cassius Chaerea was decapitated with the same sword he had used to kill Caligula.
The Emperor Caligula had reigned for less than four years and was dead before his 29th birthday. Yet in that short space of time he has gone down in history as one of its most terrible tyrants while those who had killed him in the name of liberty, justice, and the republic could not have imagined that by their actions they had guaranteed tyranny for the next 400 years.
Tagged as: Ancient & Medieval
Share this post: