Posted on 7th February 2021
The American Civil War is remembered now for its large set-piece battles, high casualty rates and famous Generals but it was also a vicious, brutal struggle fought between friends and neighbours. Guerrilla bands were formed to fight both for and against Secession that had no formal command structure and were not subject to military discipline. Some of the leaders of these bands were notorious for their cruelty and arbitrary use of violence against soldiers and civilians alike. One in particular, Champ Ferguson, who along with Henry Wirz, the Commandant of the Andersonville Prisoner-of-War-Camp, was one of only two men with links to the Confederacy to be executed for their wartime activities. Both executions, it could be argued, had more than a hint of victor’s justice about them.
Samuel “Champ” Ferguson was born in Clinton County, Kentucky, on 29 November 1821 the eldest of ten children who had little formal education and a tearaway from a young age his reputation for violence was early established.

Upon reaching adulthood he turned his hand, like his father and most of those around him, to farming but he soon found that bullying and intimidation was an easier way to make money and his quick temper ensured he was not a man to be argued with. It was the case that his neighbours soon learned to live in fear of him, so when he and his family moved to the Calf Killer Creek River Valley in Tennessee they breathed a huge collective sigh of relief.
In 1858, Ferguson’s violence reached new levels when he abducted a County Sheriff, James Reid, who had been investigating a reported misdemeanour. Tying him to a tree he killed him slowly over a number of hours by circling him on horseback and hacking at him with a broadsword. The murder was by no means a secret but no one was willing to confront him over it.
In the crisis over Secession the State of Tennessee had declared for the Confederacy but it was a State that was deeply divided over the issue. There was no doubt in Ferguson’s mind however, and he was an enthusiastic supporter of Secession even though he owned no slaves and knew no one who did. His family, however, were largely pro-Union and one of his brothers was to be killed fighting for the Union army.
Rather than enlist in the regular Confederate Army he formed his own band of irregular partisans which sometimes would number just a few dozen, on other occasions a few hundred. He operated in conjunction with the regular Confederate cavalry of General John Hunt Morgan and General Joseph Wheeler. Indeed, Morgan was to commission him a Captain of Partisan Rangers.
As far as Ferguson was concerned the war was local and personal, he knew his neighbours and he knew where their sympathies lay and from him there would be no hiding place. He and his men went from house to house and farm to farm rooting out those they believed to have pro-Union sympathies and killing them, in their beds as they slept or in the fields as they worked. Regardless of their pleas and whether or not he was on first name terms with them, they would be killed. A knock on the door from Champ Ferguson was a frightening prospect.
It was said that he liked to use the blade and that many of his victims were decapitated their severed heads kicked around like footballs for the amusement of his men, though this may have been a rumour put about merely frighten people. If so then it was believed for while Wytheville, Virginia on the pretext of receiving orders he was arrested and imprisoned for two months by the Confederate Authorities.
His most notorious atrocity was committed during the Battle of Saltville on 3 October 1864.
Salt was considered a vital commodity in pre-refrigeration days for the preservation of food, especially at the time of war when food was scarce. It was also needed for the curing of leather. The major salt producing factory for the Confederacy was at the aptly named town of Saltville in Virginia. The Union were determined to take it.
On 1 October, General James Burbridge led his Union Army, a large portion of which was made up of the 5th United States Coloured Cavalry against the lightly defended Salt Works.
Despite greatly outnumbering the Confederate defenders the Union Army met stiff resistance and unable to make much headway after two days they withdrew leaving many of their wounded behind. On 3 October, Champ Ferguson arrived in the town with his band of guerrillas and ignoring the pleas of doctors and those nurses present proceeded to go through the hospital killing every wounded black soldier they could find and dozens of sick, unarmed, and helpless men were murdered. The slaughter only ceased when regular soldiers of the Confederate Cherokee Indian and Highlanders Regiment arrived in the town and restored order. A disgruntled Ferguson and his men departed soon after.
When the following year the Civil War ended in the Confederacy’s defeat Ferguson simply disbanded his men and returned home it being widely understood there was to be a general amnesty for all guerrilla fighters on both sides and that there was no need to go into hiding. Not long after however, Union troops arrived to take him into custody. 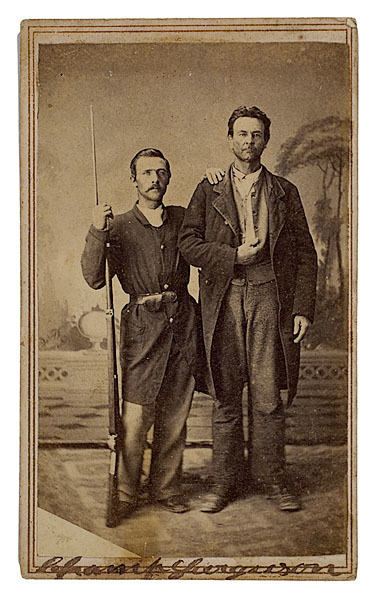 He was taken to Nashville where he was charged on 53 counts of murder, though he admitted to over a 100 which he declared to be acts of war.
During his time in prison he was said to be cheerful and was liked by his guards with whom he established a bond and posed in photographs with.
He was tried on 10 October 1865, and it proved almost impossible to find anyone to speak in his defence though General Wheeler, who was widely admired for having fought an honourable war did appear as a character witness saying that he was a good soldier who had merely been carrying his orders. The strongest testimony against him came from an old adversary “Tinker” Dave Beatty, who had led a band of pro-Union guerrillas in the same area of East Tennessee. They had tried many times to kill one another and had ended up sharing a grudging respect.
It is somewhat ironic that Ferguson was largely convicted on the testimony of a man who had committed similar crimes.
Samuel “Champ” Ferguson was hanged on 20 October 1865. He declared on the scaffold that: “I am yet a rebel, and will die a rebel”.
His last request was that his body should be removed to White County Tennessee, and be buried in good rebel soil.
Tagged as: Miscellaneous, War
Share this post: