Posted on 8th May 2021
Jean-Paul Marat was a Tribune of the People, the Keeper of the Revolution, and the Trumpet of the Terror. Through his newspaper L’Amici du Peuple, or the Friend of the People, he urged the Paris mob to ever greater revolutionary ardour. Traitors were everywhere, he wrote, and had to be eliminated; first in their hundreds, then in their thousands, and then in their hundreds of thousands. There was no end to the number of traitors who needed to be killed – for Marat there could never be too much blood.
From the bathtub where he sought relief from the disfiguring and debilitating skin disease that left his flesh red raw he denounced all he believed to be Enemies of the State and those he thought merely lukewarm towards the new Republic of Virtue. People trod warily of offending Marat for fear of being denounced in the pages of his paper, politicians lived in fear for to condemn or oppose him was to sign your own death warrant. But where others had been cowed one woman was willing to act.

Marie-Anne Charlotte Corday d’Armont was born on 7 July 1768, in the small hamlet of Saint-Saturnin-des-Ligieries in Normandy. She was the scion of minor but impoverished aristocracy. Her mother had died when she was still a child and her father either unable or unwilling to cope with a family alone sent her and her older sister to be raised by the Nuns at the Abbaye-aux-Dames Convent in Caen. Here’ in the confined cloisters of the Convent shut away from the harsh realities of life Charlotte was able to devote herself to reading and learning.
It was then a quiet, happy childhood and Charlotte had a lot of time to familiarise herself with the works of Voltaire and Rousseau early becoming a devotee of Enlightenment ideas, so it was little surprise that when the revolution began on 14 July 1789, she embraced it with enthusiasm. She was convinced, though she remained a Royalist at heart, that an elected Chamber of Deputies working alongside the Monarchy could transform France.
She was a revolutionary no question but of the wrong kind and in the end could not reconcile herself to its consequences.
After leaving the Convent, Charlotte went to live with her cousin Coustellier de Bretteville Gouville and the two women soon became very close and Charlotte was made sole heir to the older woman’s estate. Had she chosen to do so she could have become that rare thing in eighteenth century France a woman of independent means but she was to choose a very different path. 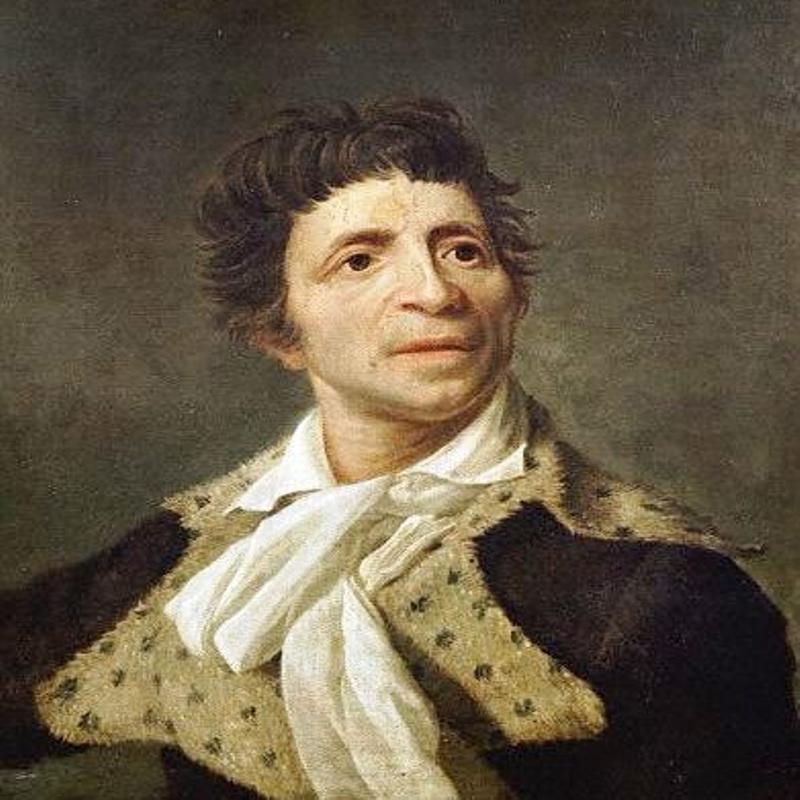 In May 1793, Marat condemned the ruling Girondin faction in the National Convention. The Girondins were a loose political grouping that represented the merchant and business class and were less extreme than the Jacobins and Hebertists. They also sought to limit the excesses of the revolution and as a result they were hated by Marat.
The Girondins, aware that they were in Marat’s sights had looked to pre-empt any action he might take by having him tried before the Revolutionary Tribunal for treason but he had been acquitted on all charges. Carried on the shoulders of his supporters back to the Convention amid cheering crowds it became clear to the Girondins their days were now numbered.
On 2 June, denounced by Marat prominent Girondins and those known to support them were arrested by the National Guard. Their leaders Pierre Brissot, Charles Dumouriez and many others were executed. Those who could escape did so, many of them to Caen in Normandy where they could still call upon support.
It was in Caen that Charlotte, a Girondin supporter, was regaled with the stories of persecution, death and Jacobin terror. She was still in mourning for the King who had been executed five months earlier and now her friends were being hunted like animals, the latest victims of the National Razor.
For Charlotte the Beautiful Revolution had become a nightmare of blood and gore for which one person was responsible – Jean-Paul Marat. If there was no man who would commit himself to ending this horror then she would do so herself.

France at this time was a country of internal borders and to travel to Paris Charlotte had to acquire a passport. Her application went unopposed and the passport she was provided with describes her time as: “Twenty-four years of age, five feet and one inch in height, hair and eyebrows chestnut colour, eyes grey, forehead high, mouth medium, chin dimpled, and with an oval face.”
On 9 July 1793, Charlotte set off for Paris with little more than the clothes she stood up in and a copy of Plutarch’s Parallel Lives. Upon her arrival she took a room at the Hotel de la Providence leaving it only briefly to purchase a kitchen knife with a 6 inch blade. Returning to her room she then penned a short address to the French people explaining what she intended to do and why.
On the morning of 13 July, she visited Marat’s home on the Rue de Cordeliers. She explained to the guards at the door that she needed to speak to the “Good Citizen” on a matter of very great significance. But Marat was a busy man, an important man and did not see just anybody. They denied her request, barred her entry and sent her on her way.
Charlotte remained undeterred however, and returned later that afternoon to hang around outside the house in the hope that Marat would at some point emerge leaving himself vulnerable to attack. It wasn’t to be but seeing some men delivering food and newspapers she seized her opportunity and followed them in. Once inside the house she told those who questioned her that she had in her possession a list of traitors in the city of Caen that Marat must see. Told of this and knowing that Marat would be furious at not being told of traitors wherever they may be Charlotte was quickly ushered into his presence.
Marat was languishing in his bathtub but took the list from Charlotte and perused it thoroughly merely nodding his head from time to time. Charlotte sat nearby saying nothing, beads of sweat appearing on her brow on what was a very hot day.
After about 15 minutes Marat looked up and said, “Madame, they will all be dead within the week.” Immediately upon hearing this Charlotte stood up and without a word removed the knife hidden in her dress and lunged forward plunging it deep into Marat’s chest. He cried out to his wife Simone who was in a nearby room, “Help me, my dear friend.”

By the time the guards responded to his cries Marat, slumped in his blood-stained bath the knife protruding from his chest was already dead. Standing nearby unmoved physically or emotionally was Charlotte. She was immediately arrested.
Within days of her arrest Charlotte was hauled before the Revolutionary Tribunal. When questioned about her motives she replied, echoing the words of Maximilian Robespierre during the trial of the King that she had “killed one man to save the lives of a hundred thousand others.” But it didn’t matter much what she said. In the hostile environment of the Tribunal there could be only one sentence – death.
In the few hours remaining to her Charlotte penned a number of letters. In one she wrote “there are so few patriots who know how to die for their country.” In another she begged her father’s forgiveness for “ending my life without your permission.”

On 17 July 1793, she was paraded before a howling mob that had gathered outside the prison before beginning the journey to her place of execution. Despite the abuse and being spat upon she refused to bow her head.
There were few of the formalities that often accompanied a traitor’s death and with her hands bound and not permitted to speak she was placed beneath the guillotine and dispatched in haste. As the Executioner Legros held her severed head still dripping blood up to the crowd he slapped it across the face. Such contempt for the recently deceased even in Revolutionary France was deemed unacceptable and was to earn him three months in jail.
Before Charlotte’s decapitated corpse was disposed of the body was examined to see if she was still a virgin. It was believed at the time that virginity in women over a certain age led to insanity. Charlotte was 25 years of age, and it was agreed that she was indeed virgo intacta. She must therefore have been mad at the time she committed the crime. Having completed their violation of Charlotte’s body it was taken to the Madeleine Cemetery where it was buried without Christian rites.
Charlotte Corday would be despised in Paris and the other urban centres for a time but soon forgotten; so unlike her victim Marat who would be immortalised forever by the great propagandist of the Revolution the painter Jacques-Louis David as the martyred hero brutally murdered by the evil agents of reaction.
Tagged as: Miscellaneous, Women
Share this post: