Posted on 8th January 2021
Private Frank Richards of the Royal Welsh Fusiliers was a Reservist re-called to the Colours upon the outbreak of war in 1914. In his personal memoir of the war, 'Old Soldiers Never Die', a war in which he fought throughout and never received a wound of any consequence, he provides a first-hand account of the so-called Christmas Truce:
On Christmas morning we stuck up a board with 'Merry Christmas' on it. The enemy had stuck up a similar one.
Platoons would sometimes go out for twenty-four hours' rest - it was a day at least out of the trench and relieved the monotony a bit - and my platoon had gone out in this way the night before, but a few of us stayed behind to see what would happen.
Two of our men then threw their equipment off and jumped onto the parapet with their hands above their heads; two of the Germans done the same and commenced to walk up the river bank, our two men going to meet them. They met and shook hands and then we all started to leave the trench. Our Company Commander, who we named Buffalo Bill, rushed into the trench and endeavoured to prevent it, but he was too late: the whole of the Company were now out, and so were the Germans. He had to accept the situation, so soon he and the other company officers climbed out too. We and the Germans met in the middle of no-man's-land. 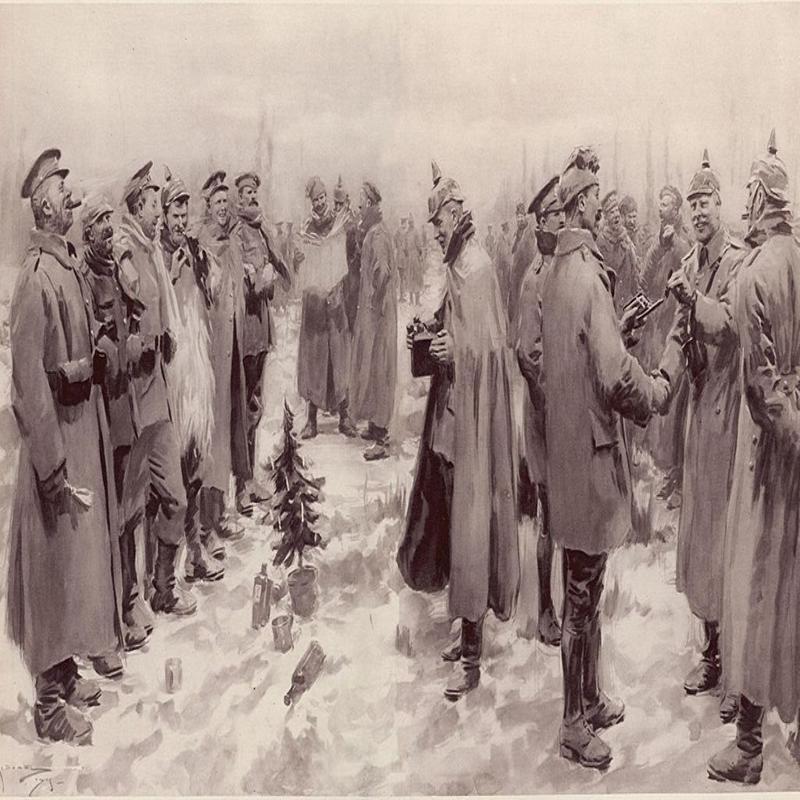 Their officers was also now out. Our officers exchanged greetings with them. One of the German officers said that he wished he had a camera to take a snapshot, but they were not allowed to carry cameras. Neither were ours.
We mucked in all day with one another. They were Saxons and some of them could speak English. By the look of them their trenches were in as bad a state as our own. One of their men, speaking in English, mentioned that he had worked in Brighton for some years and that he was fed up to the neck with this damned war and would be glad when it was all over. We told him that he wasn't the only one that was fed up with it.
The German Company-Commander asked Buffalo Bill if he would accept a couple of barrels of beer and assured him that they would not make his men drunk. They had plenty of it in the brewery. He accepted the offer with thanks and a couple of their men rolled the barrels over and we took them into our trench.
The German officer then sent one of his men back to the trench, who appeared shortly after carrying a tray with bottles and glasses on it. Officers of both sides clinked glasses and drunk one another's health. Buffalo Bill had presented them with a plum pudding just before.
The officers came to an understanding that the unofficial truce would end at midnight. At dusk we went back to our respective trenches.
The two barrels of beer were drunk, and the German officer was right: if it was possible for a man to have drunk the two barrels himself he would have burst before he had got drunk - French beer was rotten stuff.
Just before midnight we decided not to commence firing before they did. At night there was always plenty of firing by both sides if there were no working parties or patrols out. Mr Richardson, a young officer who had just joined the Battalion and was now a platoon officer in my company wrote a poem during the night about the Briton and the Bosche meeting in no-man's-land on Christmas Day, which he read out to us. A few days later it was published in The Times or Morning Post, I believe.
During the whole of Boxing Day we never fired a shot, and they the same, each side seemed to be waiting for the other to set the ball rolling. One of their men shouted across in English and inquired how we had enjoyed the beer. We shouted back and told him it was very weak but that we were very grateful for it. We were conversing off and on during the whole of the day.
We were relieved that evening by a battalion of another brigade. We were mighty surprised as we had heard no whisper of any relief during the day. We told the men who relieved us how we had spent the last couple of days with the enemy, and they told us that most of the British troops in the line, with one or two exceptions, had mucked in with the enemy. They also told us that the French people had heard how we had spent Christmas Day and were saying all manner of nasty things about the British Army.
Tagged as: Fact File
Share this post: