Constantine I: The Vision of the Cross

Posted on 23rd January 2021
As Constantine the Great he was the first Christian Emperor of Rome, the man who took it from a minority cult liable to persecution to the established religion of much the then known world.
There had of course been Christian settlements scattered around Europe and the Middle East particularly in Greece and Anatolia for many years, and there was also a large community in Rome itself but it was to be Constantine's adoption of Christianity as the one true faith and the legitimacy this brought along with the political protection he provided that facilitated its spread - but why Constantine and why Christianity? After all, he was never a Christian as we would understand it. 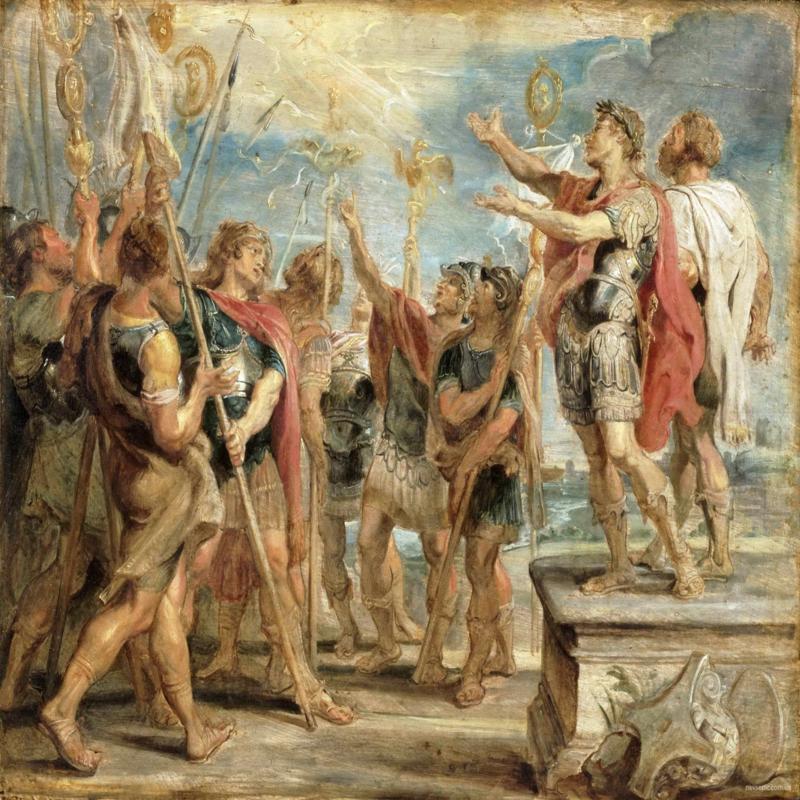 He was born Flavius Valerius Constantinus in AD 272 in the town of Naissus in modern day Serbia. His father Constantius was an Officer in the Imperial Guard, a well-respected man who rose rapidly through the ranks to become Governor of Dalmatia; but it was not his father who though superstitious as most Romans were who introduced the young Constantine to Christianity but his low born mother Helena.
At the time of Constantine's birth Rome no longer possessed the resources or indeed the manpower to effectively police an Empire that was large, difficult to administer and threatened its length and breadth by migrating tribes. As a result, in July, AD 285 the Emperor Diocletian took the unprecedented step of dividing it up.. He appointed his colleague Maximian as Emperor in the West with his capital at Mediolanum (Milan) or sometimes Trier in Germany; while he continued to rule in the East from Nicomedia or Izmet in Turkey.
Both parts of the Empire would be governed independent of each other but Diocletian would be the senior Augustus or Caesar. This permitted both Emperors to govern their territories more effectively and to secure their own borders. The new system worked so well that in AD 293, Diocletian decided to sub-divide the Empire.
Both the Western and Eastern halves of the Empire would now have two Emperors who would have complete jurisdiction in the areas they controlled. The junior Emperor would however be subordinate to the senior Emperor just as they were all subordinate to Diocletian himself.
In the East Diocletian chose Galerius, a coarse, brutal but loyal servant as his subordinate while Maximian in the West appointed Constantine's father Constantius who had earlier divorced his wife Helena to marry Maximians's step-daughter and thereby seal his position in the new political system that was to become known as the Tetrarchy.
The two senior Emperors adopted the sons of their subordinates and both Constantine and Maximian's son Maxentius, were sent East to live in the Court of Diocletian. This indicated that there was to be a line of succession something that was necessary perhaps, but would be the source of friction.
From AD 295 to AD 299 Diocletian waged war on the Sarsannid Persian Empire in a hard-fought campaign that did not always go the Romans way. Galerius, who had a hatred for religious cults blamed Christian influence at the Imperial Court for undermining the Roman army and that they were in fact praying for its defeat. Diocletian likewise had little time for the Christians and had earlier ordered the Deacon Romanus of Caesaria to have his tongue cut out before having him executed merely for his arrogance in speaking out of turn. He would however have been satisfied in merely having them excluded from all official posts. Galerius was more strident and insisted upon their extermination.
In AD 303, Diocletian bowed to the pressure from Galerius and ordered a general persecution of Christians across the Empire; Christian places of worship were destroyed, scriptures burned, and their clergy hunted down and executed. The persecutions proved a failure for instead of expunging Christianity as intended it merely created martyrs which as a fundamental tenet of Christian belief only increased its influence. Even Galerius was forced to concede this and in AD 311 the persecutions ceased, though Christians were still widely discriminated against.
Constantine had received his schooling in the Court of Diocletian where he had learned philosophy, Greek, and studied Latin literature. He also regularly attended lectures given by Christian scholars. He was a fast learner and quickly became familiar with the political intrigue of the Imperial Court and how to manipulate it to his advantage. He also gained his first military experience fighting alongside Galerius in the war against the Persians and was to prove himself an able and courageous soldier.
On 1 May AD 305, Diocletian was forced to retire due to a long-standing illness and as had previously been agreed Maximian did likewise in the West. Constantius and Galerius were now promoted to senior Augustus but this did not see either Constantine or Maxentius promoted to be their subordinates. Instead in his resignation speech Diocletian had named Flavius Valerius Severus, an old friend of Galerius as subordinate Augustus in the West and Maximinus Daia, a nephew of Galerius, as subordinate Augustus in the East. Galerius had been instrumental in this decision trusting neither his own son nor Constantine. 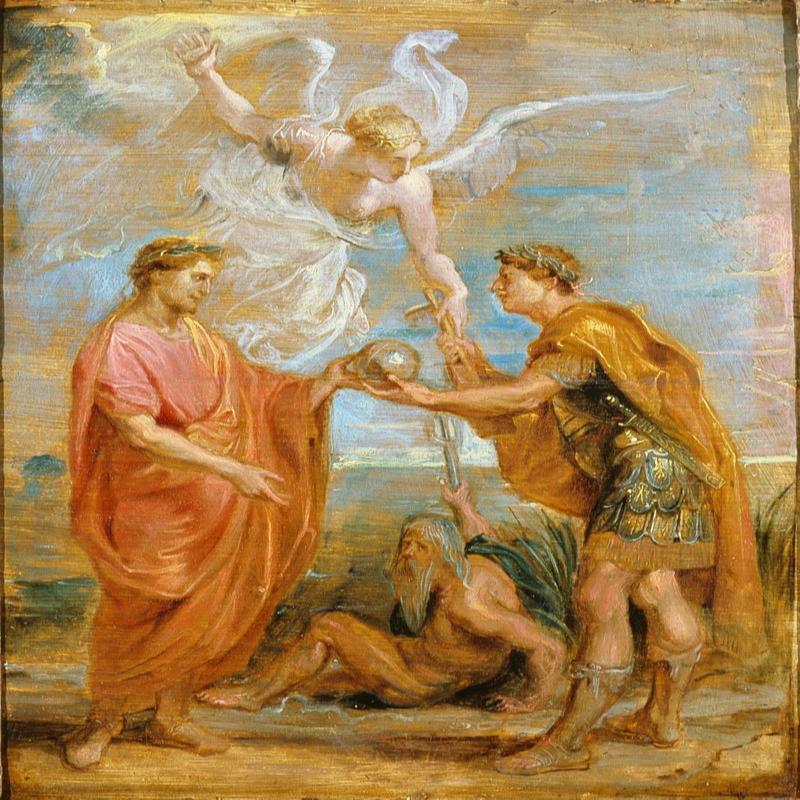 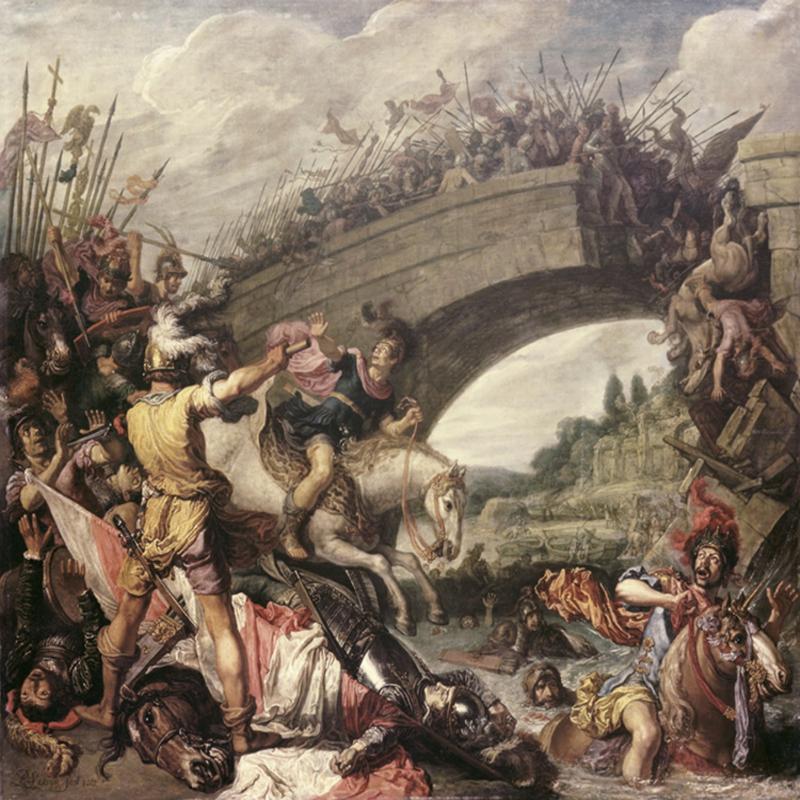 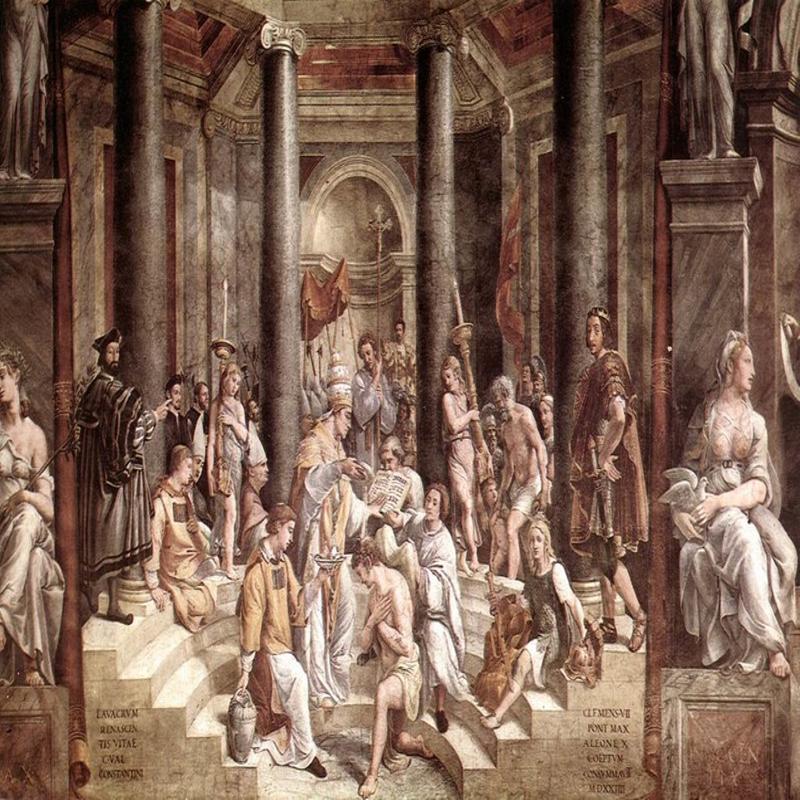 In his new capital he was leading the life of an Eastern Potentate dressing in flowing gowns, wearing a pearl crown, even a wig. He was served and waited upon by eunuchs and ate eastern food but he remained a pious Christian. Sunday he proclaimed a day of rest and prayer and every Friday he would preach to his courtiers on morals and the need for ever greater Christian devotion.
Despite his satisfaction at being the One True Emperor of the One True Faith the external threats to his Empire remained. In AD 332 at the age of 58, he was to lead his last great military campaign against the Sarmatians and Goths who were massing on his eastern borders. He was to defeat both but he knew that the only way for the Empire to survive was to assimilate these Barbarians but by doing so Rome was to sow the seeds of its own destruction.
In AD 325, he summoned the Council of Nicaea to codify the rules that were to govern the Christian Church. It decided upon the divinity of Jesus Christ as the Son of God and upon Easter as a time of Christian celebration. The Nicene Code that emerged from the Council still forms the basis of Church ritual and Canon Law to this day.
In the spring of AD 337, Constantine fell seriously ill. As he lay on his deathbed he requested to be baptised in the River Jordan as Christ had been before him. But because of the severity of his illness this proved impossible. Instead he was baptised by Bishop Eusebius in Nicomedia.
It was said that he had waited so long to be baptised to ensure that he received remission for as many of his sins as possible and he would often bemoan in the last years of his life that he had not been a better Christian. On 22 May AD 337, Constantine the Great, the first Christian Emperor of Rome and the man who changed the course of Western history died peacefully in his bed aged 65.
Tagged as: Ancient & Medieval
Share this post: