Crime and Punishment in Elizabethan England

Posted on 6th January 2021
Beyond the glittering Court of the Virgin Gloriana, Elizabethan England was a place of great hardship and harsh punishment. The countryside was a place of darkness, violence and dread; the towns no less so as places of intrigue, dishonesty and disease.
Fear stalked the land as harvests failed, poverty increased and Sir Francis Walsingham’s network of spies rooted out enemies both at home and abroad. At a time when the plays of William Shakespeare and Christopher Marlowe, the poetry of Edmund Spenser and John Donne, and the music of John Downland and William Byrd saw a flourishing of the arts in England as never before the axe was forever being sharpened, gibbets scarred the landscape and the governance of England resembled a police state. But it hadn’t always been so. 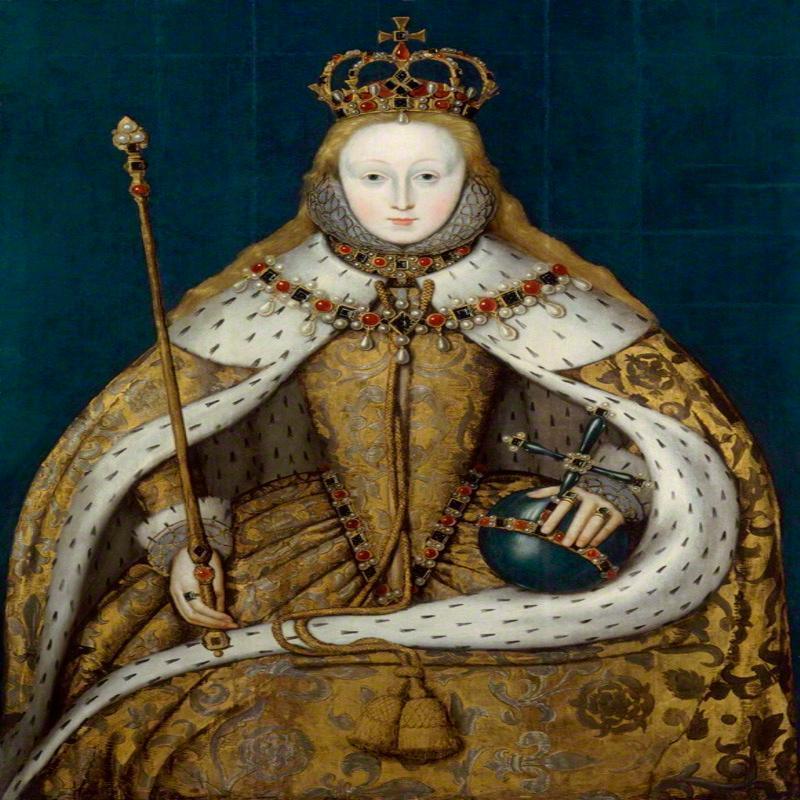 Upon her succession to the throne in November 1558, the young Queen Elizabeth appeared to hold out the prospect of a kinder, gentler England following the brutal religious suppression of her half-sister Mary’s reign. After all, hadn't she promised not to make windows into men’s souls?
Never as vindictive as Mary, nor as sanguine as her father Henry VIII, Elizabeth could nonetheless be unpredictable and capricious even if her anger reflected more her mood than her temperament, and she rarely wished to know of the punishments carried out in her name; even in acts of treason she wanted to hear no more of it once the axe had fallen. Often she would commute sentences of death for those of lesser account if she perceived that the bloodletting had gone too far. But the personal whim of a Queen could not obstruct the implementation of the law and neither was it intended to do so even if the punishment would vary according to the social class of the miscreant.
The most heinous crime, as it had always been in the past and would be for centuries to come, was that of treason, for which there could be no mercy, and no punishment was too severe. It was commonplace for the convicted traitor to be led to their place of execution along cobbled streets and through baying crowds tied to a hurdle, or low-lying sled, often face down so that they could see and smell only the filthy ground beneath them and not look upon the sky nor those who were abusing them.

Once upon the scaffold they would be hanged until they were half-dead before being taken down and having their bowels removed and burned before their eyes; then barely able to breathe and slowly bleeding to death their limbs would be severed the four-quarters of which along with the head would later be displayed at prominent places throughout the city as a warning to others. Such was the horror of being hung, drawn, and quartered that many so condemned would try to leap from the scaffold once the noose had been placed over their head in the hope that the fall would break their neck.
Prominent clergy and those of the higher nobility would likely avoid such a fate it not being thought right or proper to so humiliate them, not so much an act of leniency on the part of the Monarch but a practical measure designed to preclude the setting of dangerous precedents - for them mere decapitation would suffice. Once the head had been severed from the body it would be held up by the Executioner, not just for the benefit of the crowd but so the victim, it being believed that consciousness remained for some time after decapitation, could look upon their mangled corpse made be aware that death was imminent.
Those who were accused of treason would almost certainly be subjected to torture, though not permitted by law as a means of extracting a confession, it could only be used to elicit further information once a conviction had been secured, a law more honoured in the breach; and the Authorities possessed a fearful array of the instruments of torture required, among them:
The Iron Maiden, a large upright metal cabinet with a door the interior of which was covered with sharpened spikes that once closed with the victim inside would pierce the skin causing great pain.

The Scavenger’s Daughter, invented during the reign of Henry VIII by the Lieutenant of the Tower of London Leonard Skevington, with a little help from his wife Margaret, was an A Framed device upon which the victim would be bound before it was pulled tightly together forcing his head down and knees up thereby compressing the body causing him to bleed from both ears and nose.
The Iron Collar would see the victim chained upright in the centre of a room and have a collar with spikes placed around his neck. If he tried to move his head in any direction the spikes would penetrate the neck and throat and tear away the flesh.
The Rack was the most feared of all tortures the mere threat of which was often enough to make most people confess to almost anything. It was a mechanism of rollers and ratchets that turned by degrees would tear the ligaments, dislocate the joints, separate the bones, and eventually snap the spine of the victim. It was the most excruciating agony often extended over many hours, sometimes days, which even if the victim were to survive the ordeal and be released would leave them paralysed or disabled for life.
There was also the usual array of whips, thumb screws and branding irons with the more elaborate forms of torture reserved for those accused of treason.
Possessed of the Royal Warrant local Justices of the Peace maintained law and order in the Shires dealing with common crimes such as burglary, purse cutting, dice-cogging (a gambling scam) witchcraft, physical assault, sexual misdemeanours, and highway robbery.

The latter carried the death penalty and travelling was considered so dangerous it was actively discouraged with a licence obtained from the local Bailiff required to do so. Even the Queen, who ran a peripatetic Court, never ventured to the north or west of the country it not being thought safe for her to do so.
Not only could travelling spread the plague but it was also a means whereby protest and discontent could be disseminated; the few roads available were infested with ne’er do wells, and the local taverns a den of thieves in which an overnight stay would almost certainly result in being stripped of one’s purse, one’s clothes and deprived of one’s goods.
A multitude of fears ensured that strangers were rarely welcomed' and so it was with vagrants who moved from one parish to another to beg or look for work.
The administration of the Poor Law was the responsibility of the parish upon whom the burden and the cost fell and in line with the tone set by a Monarch for whom thrift was never far from her mind they were disinclined to support their own poor let alone those who came from elsewhere, as such vagabondage in the able-bodied was effectively criminalised.

Those found to be from elsewhere without work and homeless were locked up overnight before being bored through the ear and whipped from the parish. If they were not from the neighbouring parish the same would happen again, if they returned to either the likelihood was they would be hanged.
Murder was a capital offence, with the perpetrator first having his left hand severed before being taken to, or near, the scene of the crime where they would be hanged in chains and left to die. The Justice of the Peace who had passed sentence might order the convicted man garrotted first, to do so being considered an act of compassion.
Those who had caused death without malice aforethought were simply hanged. 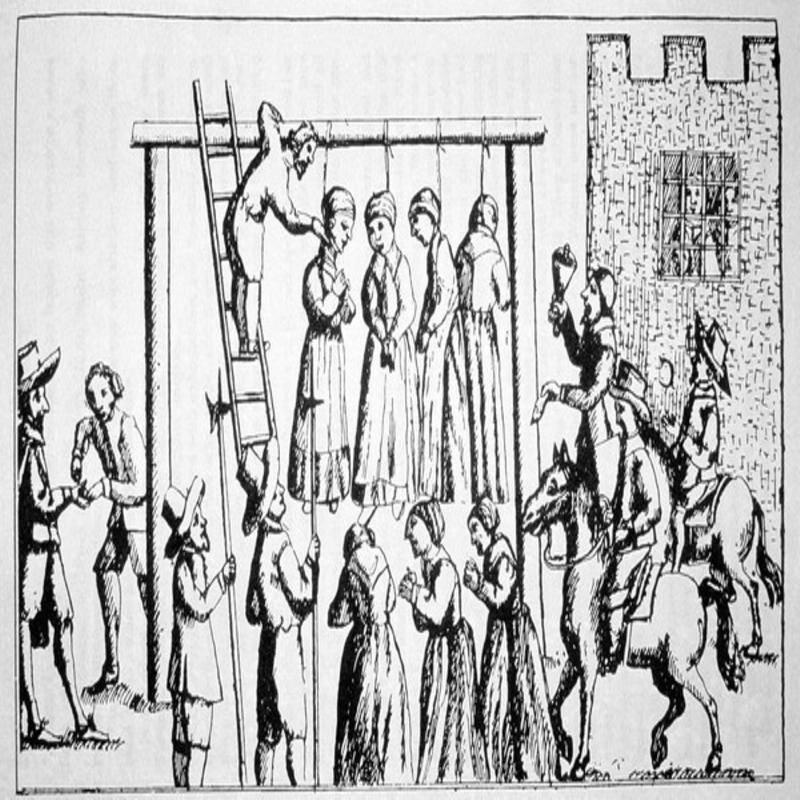 Death sentences were also regularly passed for witchcraft, sodomy, and both robbery and poaching if committed at night, crimes perpetrated during the hours of darkness, the Devil’s Time, when man was at his most vulnerable were deemed particularly heinous. Considered primarily a female crime and therefore deemed an act of acute malice a uniquely savage punishment was reserved for those convicted of poisoning - the perpetrator being lowered slowly into a vat of boiling water and scalded to death.
For petty offences the lash and the branding iron were common punishments with public whippings also a source of popular entertainment.
There were also many prisons in Elizabethan England which were so overcrowded and rife with disease that to be incarcerated in one could often be little short of a death sentence, but these were mainly for those who had broken the Civil rather than the Criminal Law, in particular debtors whom it was hoped would be able to pay for their stay, or at least their fines upon release.
In cases of anti-social behaviour the punishment would often be one of public humiliation:.

The Stocks, a device with boards that would clamp down and lock-in the miscreant's wrists and ankles were a common sight in most towns and villages. Here unable to move, exposed to the elements, and deprived of food and water the victim would be subject to the abuse of passers-by. Often crowds would gather to mock or throw sundry objects at a sitting target â€“ it was not a wise move to be disliked.

The Drunkard's Cloak was a barrel with holes for the arms and legs that a person whose liking for the bottle had made them a public nuisance would be made to parade around the town in.

The Gossip's Bridle devised to silence a scolding or particularly mendacious, loud and abusive woman was an iron muzzle that enclosed the head and pushed down upon the tongue serving as an effective gag.
The Ducking Stool, usually reserved to prove the guilt or otherwise of a witch was a chair attached to a pole into which the accused would be tied and lowered beneath the water of a river or lake. If the accused drowned they would be declared innocent. If they survived the ducking then they were deemed to have rejected the baptism were found guilty of being a devil's disciple and executed. 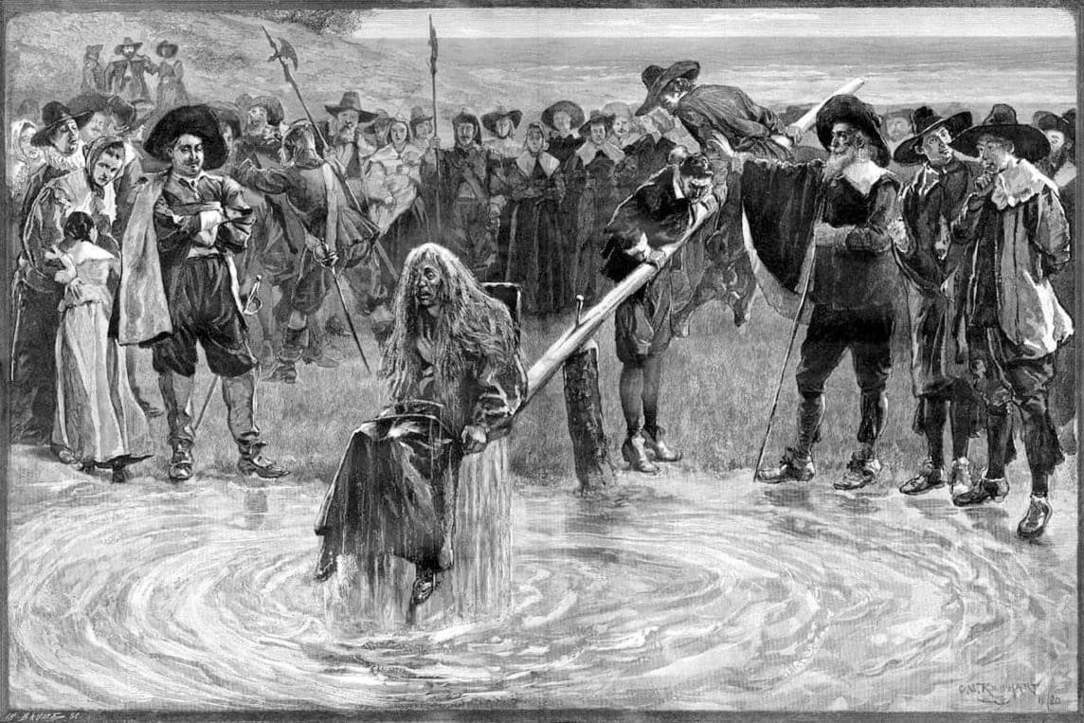 It was not easy to put oneself beyond the earthly power to punish, suicide for example was a sin against God and those who took their own life were denied a Christian service and buried in un-consecrated ground a stake driven though their heart. But there could also be cases of special pleading. A priest or someone of learning who professed to be A Man of the Book and was able to quote the appropriate verses from the Bible could claim Benefit of Clergy and request to be tried before an Ecclesiastical Court where the penalties for offenders were much lighter, sometimes little more than an act of penance or charity. Nonetheless, they would be branded on the thumb as a mark of their offence and there would be no second chances.
In criminal cases a pregnant woman could Plead Her Belly, it not being thought Christian to kill both the mother and her child, though sometimes this would only result in a suspension of sentence, the mother being executed once the child had been born.
Tagged as: Tudor & Stuart
Share this post: