Cromwell and the Rump

Posted on 15th March 2021
On the 1 December 1648 the House of Commons voted by 129 to 83 to nominally accept the terms of the Treaty of Newport that had been negotiated with the King and that would see him restored to the throne. The vote was not yet binding as it still had to be voted on by the House of Lords though few doubted that it would pass by a large majority. It was a clear indication that Parliament was willing to accept the return of a King its army had spent the last six years fighting a bloody war to depose.
As far as Oliver Cromwell, Henry Ireton and the other members of the Army High Council known as the Grandees were concerned any agreement with a King they now regularly referred to as “That Man of Blood” was unacceptable. They had already made the decision that rather than be restored to his position as England’s Monarch he should stand trial for his crimes. 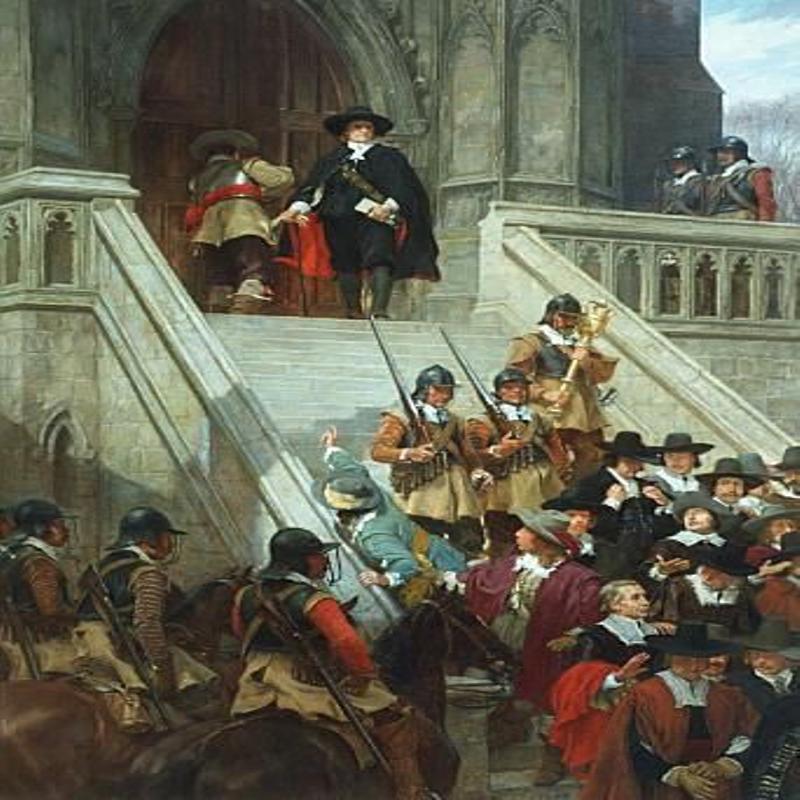 A week later on 7 December, Colonel Thomas Pride on the orders of Henry Ireton arrived in Parliament with a company of troops. He positioned them atop the stairs that led into the House of Commons Chamber and reading from a pre-prepared list he had those who appeared on it prevented from entering and placed under arrest.
There were three Public Houses named Heaven, Hell, and Purgatory that stood near to the Houses of Parliament and the arrested MP’s were taken to Hell where they were while the decision was made who should be imprisoned and who should be released. Most were in fact allowed to go free but they were not permitted to return to the House.
Pride’s Purge as it was to become known lasted until 12 December and he was perhaps a little over-zealous because by the end of his work only around 200 of the 470 elected Members of the Chamber remained. The much reduced and carefully selected House of Commons that was derisively known as the Rump would now be more compliant to Oliver Cromwell and Army High Council’s wishes.
On 4 January it passed legislation allowing the King to be tried for treason. The House of Lords as predicted rejected it out of hand but were at first ignored and then two days later on 6 January it was closed down and the institution abolished. In February following the King’s trial and execution the Monarchy itself was also abolished. 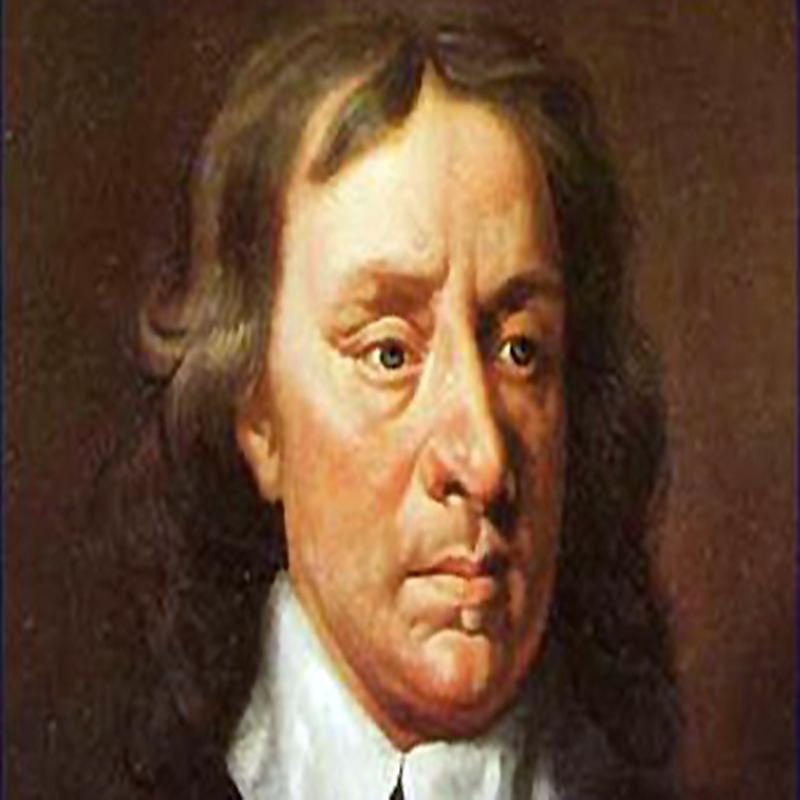 The Rump Parliament had been specifically created to do Oliver Cromwell and the Army Council’s bidding and it was never intended to be a permanent body. The Rump however did not see it this way, they were the Parliament of England and with the Monarchy and the House of Lords no longer part of the country’s political landscape they were the supreme power in the land.
The members of the Rump soon showed themselves deeply conservative in their views and they wanted to see a return to normality as quickly as possible but by this they meant a pre-Civil War normality. They disavowed firebrand religion and had no desire to increase the franchise and introduce dangerous elements of democracy into the country. A return to prosperity and the restoration of their authority in the counties was their intention and they busied themselves enacting legislation to guarantee it.
New taxes were raised mostly by the imposition of punitive measures on known Royalists and they were also eager to sell Crown lands, even Church property and many Members of the Rump were to enrich themselves on proceeds derived from their own legislation.
The Law Courts were also kept busy settling property and land disputes making the many MP’s who were also lawyers even richer.
They also sought to stamp out immoral behaviour. Christmas had been banned the previous year as a Popish festival and nothing but an excuse for ribaldry and licentious behaviour; and in May 1650 they passed the Adultery Act which carried the death penalty for adultery itself and three months imprisonment for fornication out of wedlock. Also, instead of implementing Cromwell’s cherished dream of religious toleration (Catholics excluded) the Rump Parliament actually imposed restrictions on the more extreme Protestant sects such as the Ranters and the Quakers.
A simply run for profit country governed by and in the interests of lawyers, merchants, and money men was not the Godly and sober Commonwealth that Cromwell had imagined – was this really the reason the war had been fought for and so many lives and so much treasure lost? It neither satisfied his pious religious enthusiasms nor the more radical elements of the army. It also did little to heal the wounds of the Civil War.
In early 1653, Cromwell was outraged to discover that the Rump was debating proposals to maintain itself in perpetuity and fill the many vacant seats with supporters in what were known as Recruiter Elections. He believed that the Rump was merely protecting its own position and commercial self-interest and in this he was almost certainly right. He proposed instead that Parliament be dissolved and an Interim Council formed to run the country while fresh elections were held.
In negotiations with the leading parliamentarian Sir Henry Vane it was agreed that the Members would suspend their own debate and work with Cromwell on his proposal for an Interim Council. When on the night of 19 April he was informed that Parliament was still in session and drawing up a list of those they wished to nominate for the Recruiter Elections Cromwell flew into a rage.
The following day he turned up at the House of Commons where removing his hat as a sign of respect and taking his usual seat he quietly listened to the debate. After an hour or so he rose and requested permission to speak. 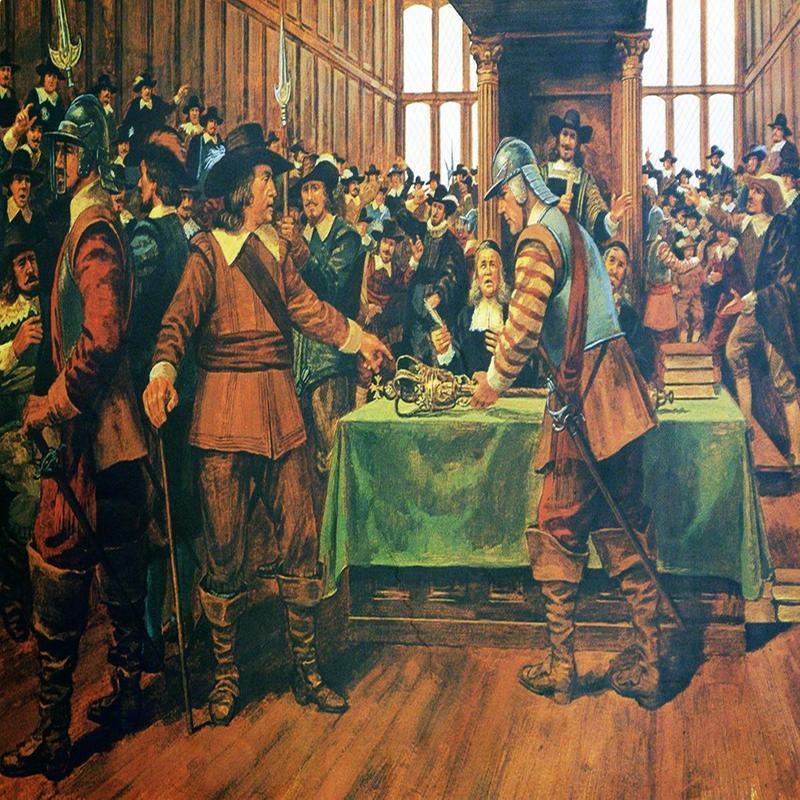 At first he was calm and thanked the Members for their hard work in difficult and troubling times. But he still had much more to say and as he got into his stride parliamentary protocol and polite language were cast aside.
Becoming increasing angry with the passing of every minute he accused the Rump of being Godless men of greed and avarice who were no Parliament. Then looking directly at Sir Henry Marten and Sir Peter Wentworth, two men he had long had a dislike for, he shouted at them “Whore-masters” before accusing Sir Thomas Challoner by name of being a drunkard.
When some Members raised objections to his disrespectful language he shouted them down. They were a disgrace to the memory of those who had fought and died in a Godly cause. He told them:
“You have sat too long for any good you have done. Depart, I say, and let’s have done with you. In the name of God, go!”
He then called in a company of troops under the command of Major-General Thomas Harrison (who would later be executed as a regicide). Harrison physically pulled the Speaker of the House William Lenthall from his chair as Cromwell picked up the Mace, the symbol of Parliaments authority and referring to it as “that fool’s bauble” tossed it aside telling his men to carry it away. He then ordered that the Chamber be dispersed.
Twelve years earlier the King in the event that sparked the Civil War had tried to arrest his leading opponents in Parliament but even he had stopped short of using troops to close it down. Now with this one act Cromwell had reversed everything that the Civil War had been fought for and an England that had torn itself apart in the argument over who ruled, the King by Divine Right or the people through its Parliament would be for the time being at least neither a Constitutional Monarchy nor a Government of the People but a military dictatorship.
Tagged as: Politics, Tudor & Stuart
Share this post: