Posted on 22nd March 2021
Lord Horatio Nelson was a British hero long before the moment of his greatest triumph. His victories at the Battle of the Nile and Copenhagen had seen to that. He had the affection of the people even if his very public affair with the married Emma Hamilton, a woman of dubious repute had scandalised polite society and left his own wife abandoned and humiliated. As a result, some saw him as a man of doubtful character and he was often not invited to social events and people would make their excuses rather than be seen in his company.
Few doubted his genius as a Naval Commander but an insubordinate streak that saw him quite literally turn a blind eye to orders when it suited him meant he was not entirely trusted but when Napoleon Bonaparte threatened to add Britain (that Nation of Shopkeepers) to his list of conquests he was the one man his country could turn to.

On 21 October, 1805, at Cape Trafalgar off the Spanish coast his British Fleet engaged the combined Fleets of France and Spain. Outnumbered and outgunned he would compensate for the disparity with daring and audacity. Aware that the French Admiral Villeneuve was wary of him following their earlier encounter at the Nile when he captained one of the few French ships to avoid destruction or capture Nelson decided stretch his nerves to breaking point. He would forego the usual broadside bombardment to attack head-on in two parallel columns penetrate the French line, surround and destroy piecemeal in a close quarter engagement all guns blazing.
It was a plan unorthodox, unpredictable, daring, and brilliant – it had that Nelson Touch.
On the day of the battle Nelson, contrary to the advice of his Captain’s who claimed it made him too clear and obvious a target, chose to wear his Admiral’s uniform. He had earned the right he said, and it was good for morale.
The attack began with a signal to his ships, “England expects that every man will do his duty.”

For hours the two Fleets battered away at each other while Nelson coolly observed the bloody and confused melee from the quarter-deck of his Flagship HMS Victory alongside Captain Hardy. But it was a dangerous place to be especially since the Victory had become entangled with the French Redoubtable and the sharpshooters of both ships high in the rigging were fully engaged.
Dr William Beatty was a physician aboard the Victory who helped tend to the Admiral’s wounds and would not long after the battle provide a detailed account of the day’s events:
"Lord Nelson and Captain Hardy walked the quarter-deck in conversation for some time after this, while the enemy kept up an incessant raking fire. A double-headed shot struck one of the parties of Marines drawn up on the poop, and killed eight of them; when his lordship, perceiving this, ordered Captain Adair, to disperse his men round the ship, that they might not suffer so much from being together. In a few minutes afterwards a shot struck the fore-brace-bits on the quarter-deck, and passed between Lord Nelson and Captain Hardy; a splinter from the bits bruising Captain Hardy's foot, and tearing the buckle from his shoe. They both instantly stopped; and were observed by the Officers on deck to survey each other with inquiring looks, each supposing the other to be wounded. His lordship then smiled, and said: 'This is too warm work, Hardy, to last long;' and declared that 'through all the battles he had been in, he had never witnessed more cool courage than was displayed by the Victory's crew on this occasion.'

About fifteen minutes past one o'clock, which was in the heat of the engagement, he was walking the middle of the quarter-deck with Captain Hardy, and in the act of turning near the hatchway with his face towards the stern of the Victory, when the fatal ball was fired from the enemy's mizzen-top. The ball struck the epaulette on his left shoulder, and penetrated his chest. He fell with his face on the deck. Captain Hardy, who was on his right (the side furthest from the enemy) and advanced some steps before his lordship, on turning round, saw the Sergeant Major of Marines with two seamen raising him from the deck; where he had fallen on the same spot on which, a little before, his secretary had breathed his last, with whose blood his lordship's clothes were much soiled. Captain Hardy expressed a hope that he was not severely wounded; to which the gallant Chief replied: 'They have done for me at last, Hardy.' - 'I hope not,' answered Captain Hardy. 'Yes,' replied his lordship; 'my backbone is shot through.'
Captain Hardy then ordered the seamen to carry the Admiral to the cockpit and His lordship was laid upon a bed, stripped of his clothes, and covered with a sheet. While this was effecting, he said to Doctor Scott, "Doctor, I told you so. Doctor, I am gone;" and after a short pause he added in a low voice, "I have to leave Lady Hamilton, and my adopted daughter Horatia, as a legacy to my country." The surgeon then examined the wound, assuring his lordship that he would not put him to much pain in endeavouring to discover the course of the ball; which he soon found had penetrated deep into the chest, and had probably lodged in the spine. This being explained to his lordship, he replied, "he was confident his back was shot through."
The back was then examined externally, but without any injury being perceived; on which his lordship was requested by the surgeon to make him acquainted with all his sensations. He replied, that "he felt a gush of blood every minute within his breast: that he had no feeling in the lower part of his body: and that his breathing was difficult, and attended with very severe pain about that part of the spine where he was confident that the ball had struck; for," said he, "I felt it break my back." These symptoms, but more particularly the gush of blood which his lordship complained of, together with the state of his pulse, indicated to the surgeon the hopeless situation of the case; but till after the victory was ascertained and announced to his lordship, the true nature of his wound was concealed by the surgeon from all on board except only Captain Hardy, Doctor Scott, Mr. Burke, and Messrs. Smith and Westemburg the assistant surgeons.
The Victory's crew cheered whenever they observed an enemy's ship surrender. On one of these occasions, Lord Nelson anxiously inquired what was the cause of it. When Lieutenant Pasco, who lay wounded at some distance from his lordship, raised himself up, and told him that another ship had struck, which appeared to give him much satisfaction. He now felt an ardent thirst; and frequently called for drink, and to be fanned with paper, making use of these words: fan, fan and drink, drink.
He evinced great solicitude for the event of the battle, and fears for the safety of his friend Captain Hardy. Doctor Scott and Mr. Burke used every argument they could suggest, to relieve his anxiety. Mr. Burke told him 'the enemy were decisively defeated, and that he hoped His lordship would still live to be himself the bearer of the joyful tidings to his country.' He replied, 'It is nonsense, Mr. Burke, to suppose I can live: my sufferings are great, but they will all be soon over.' Doctor Scott entreated his lordship 'not to despair of living,' and said 'he trusted that Divine Providence would restore him once more to his dear country and friends.' — 'Ah, Doctor!' replied lordship, 'it is all over; it is all over. 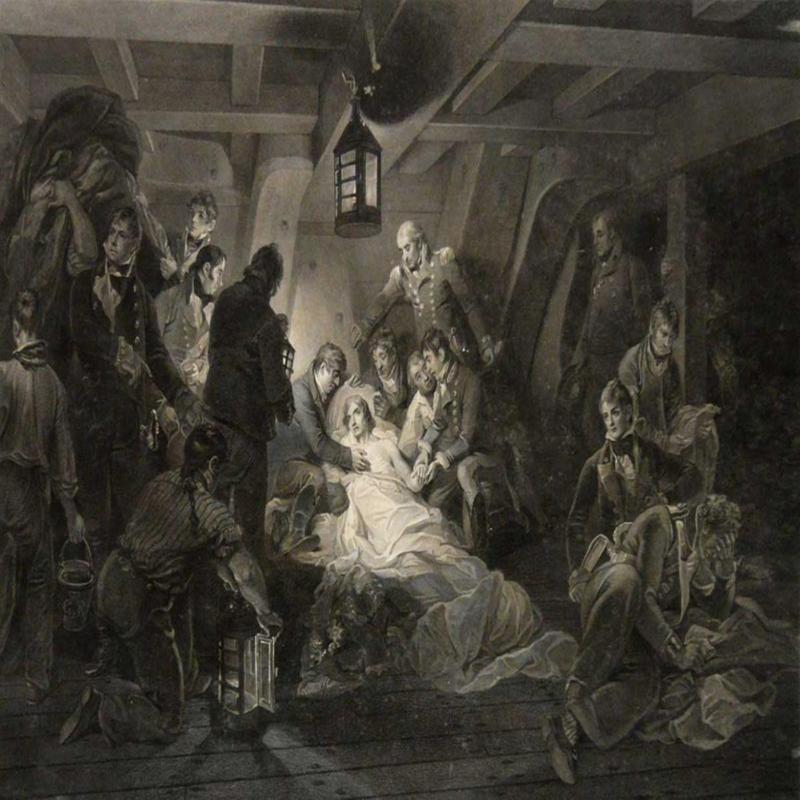 An hour and ten minutes however elapsed, from the time of his lordship's being wounded, before Captain Hardy's first subsequent interview with him. . . They shook hands affectionately, and Lord Nelson said: 'Well, Hardy, how goes the battle? How goes the day with us?'- 'Very well, my Lord,' replied Captain Hardy. . . 'I am a dead man, Hardy. I am going fast: it will be all over with me soon. Come nearer to me. Pray let my dear Lady Hamilton have my hair, and all other things belonging to me.' . . .Captain Hardy observed, that 'he hoped Mr. Beatty could yet hold out some prospect of life.' – 'Oh! no,' answered his lordship; 'it is impossible. My back is shot through. Beatty will tell you so.' Captain Hardy then returned on deck, and at parting shook hands again with his revered friend and commander.
His Lordship became speechless in about fifteen minutes after Captain Hardy left him. . . and when he had remained speechless about five minutes, his Lordship's steward went to the surgeon, who had been a short time occupied with the wounded in another part of the cockpit, and stated his apprehensions that his Lordship was dying. The surgeon immediately repaired to him, and found him on the verge of dissolution. He knelt down by his side, and took up his hand; which was cold, and the pulse gone from the wrist. On the surgeon's feeling his forehead, which was likewise cold, his Lordship opened his eyes, looked up, and shut them again. The surgeon again left him, and returned to the wounded who required his assistance; but was not absent five minutes before the Steward announced to him that 'he believed his Lordship had expired.' The surgeon returned, and found that the report was but too well founded: his Lordship had breathed his last, at thirty minutes past four o'clock; at which period Doctor Scott was in the act of rubbing his Lordship's breast, and Mr. Burke supporting the bed under his shoulders.
Tagged as: Fact File, Georgian
Share this post: