Posted on 7th February 2021
In 399 BC, the 70 year old philosopher and opponent of Athenian democracy, Socrates, who had long been a thorn in the side of the Authorities, was arrested and charged with not recognising the State sanctioned Gods and of corrupting the city’s youth. Brought before a jury of 500 of his peers his accusers were given three hours to prove his guilt, likewise Socrates was given three hours in which to defend himself.
Once the respective cases had been made the jurors made their decision and placing a small token in the appropriate urn they found him guilty by 280 votes to 220. The jurors then had to decide his fate – Socrates suggested a small fine, his accusers demanded the death penalty. The jurors chose the death penalty. But he would not be executed, he would die by his own hand, drinking the poison hemlock. 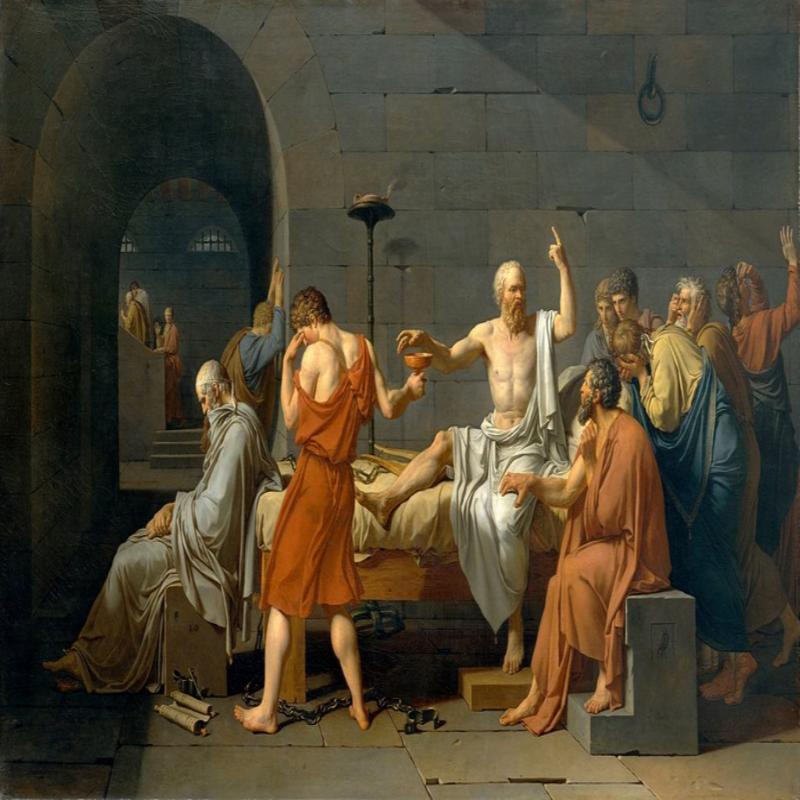 His friend and former pupil Plato, though he was not present claims to provide a verbatim account of Socrates final moments relayed to him by those who were there. His narrator, however, is a fictional character named, Phaedo:
The boy went out, and returned after a few moments with the man who was to administer the poison which he brought ready mixed in a cup. When Socrates saw him, he said: ‘Now, good sir, you understand these things. What must I do?’ ‘Just drink it and walk around until your legs begin to feel heavy, then lie down. It will soon act.’ With that he offered Socrates the cup. He took it quite cheerfully without a tremor, there was no change of colour or expression, he just looked at the man sternly and asked – is it permissible to pledge this drink to anyone?
The answer came, ‘We allow reasonable time in which to drink it.’
‘I understand’, he said, ‘we can and must pray to the gods that our sojourn on earth will continue happy beyond the grave. This is my prayer, and may it come to pass.’ With these words, he stoically drank the potion, readily and cheerfully. Up till this moment most of us were able to hold back our tears, but when we saw him drinking the poison to the last drop, we could restrain ourselves no longer. In spite of myself the tears came in floods, so that I covered my face and wept – not for him, but at my own misfortune at losing such a man as my friend.
Crito, even before me, rose and went out when he could check his tears no longer.
Apollodorus was already steadily weeping, and by drying his eyes, crying again and sobbing, he affected everyone present except for Socrates himself. He said – ‘You are strange fellows; what is wrong with you? I sent the women away for this very purpose, to stop their creating such a scene. I have heard that one should die in silence. So please be quiet and keep control of yourselves.’These words made us ashamed, and we stopped crying.
Socrates walked around until he said that his legs were becoming heavy then he lay on his back, as the attendant instructed. This man then examined his feet and legs squeezing hard and asking if he felt anything. Socrates said that he did not. He did the same to his calves and going higher, showed us that he was becoming cold and stiff. Then he felt him a last time and said that when the poison reached the heart he would be gone. As the chill sensation got to his waist, Socrates uncovered his head and said his last words:
‘Crito, we owe a cock to Asclepius. Do pay it. Don’t forget.’
‘Of course’, said Crito. ‘Do you want to say anything else?’
‘There was no reply to this question.
After a while he gave a slight stir, and the attendant uncovered him and examined his eyes. Then Crito saw that he was dead.
This was the end of our friend, the best, wisest and most upright man of any that I have ever known.
Tagged as: Ancient & Medieval, Fact File
Share this post: