Posted on 7th March 2021
She was born Marie Delphine Macarty, the daughter of slave-owning Irish immigrants who became prominent members of New Orleans High Society.
Raised on the Plantation where slaves were at her beck and call she never wanted for anything and her only ambition in life so it was said, was to maintain the status she had been born into and that meant making the right marriage; not that potential suitors were ever in short supply for tall and slim with long dark hair, large baleful eyes, a near perfect complexion and a teasingly flirtatious manner men fell at her feet.
In 1804, she married the Spanish Nobleman Don Ramon de Lopez y Angula but he died not long after in Havana of suspected heart failure. Four years later she married for the second time to the slave trader Jean Blanque but he too died in similarly mysterious circumstances.
It appeared that Delphine was unlucky in love and there followed a long period of widowhood until on 25 July 1825 when she married for the third time to Dr Louis LaLaurie, a prominent New Orleans dentist, one of only two in the entire city.
It appeared to be a happy marriage and it was often remarked upon how comfortable they were in each other’s company, cloyingly so, some said. 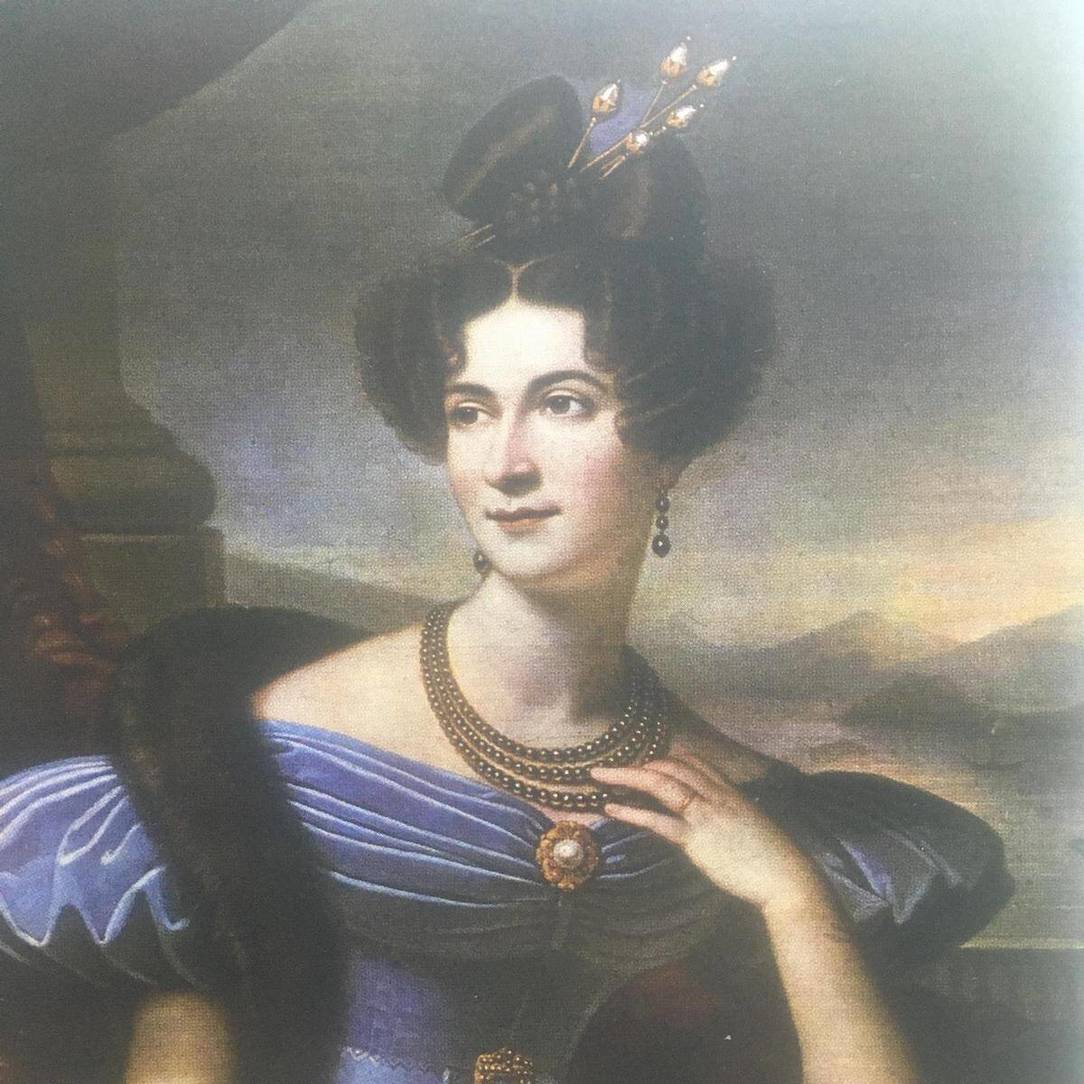 They soon moved into a large mansion at 1140 Royal Street in the French Quarter where they regularly threw lavish parties and became doyens of French Creole Society but despite the generosity of her hospitality people often felt uneasy in Delphine’s presence. She had a sweetness of nature no doubt, but her mood was not always obvious or even and she could sometimes appear distant. It was also rumoured that she had a fierce temper and was known to verbally abuse her slaves in front of others.
On more than one occasion she had been investigated by the Authorities but she had previously given a number of her slaves their freedom and it was thought that anyone who would do such a thing as of an act of kindness could not possibly be guilty of committing the cruelties of which she had been accused. After all, slaves were an expensive commodity and to set one free constituted a substantial financial loss on the part of the slave owner.
It was also noted how she would make a great public show of affection towards her slaves, though it was clear that she would not tolerate any infraction of the rules and flashes of temper could be discerned beneath a normally calm exterior.
Delphine, who insisted upon being referred to as Madame by both servants and friends alike, was always impeccably dressed but on a spring morning in 1833 she was seen in the street with her clothes ruffled and her hair unkempt viciously whipping a 12 year old slave girl. The terrified screaming girl managed to break free from Madame’s grasp and flee back to the house with Delphine hot on her heels. A few minutes later she was seen to fall to her death from a third floor balcony. The body was quickly retrieved and dragged back into the house but the incident had been witnessed and a complaint filed.
The outrage only increased when it emerged that the girl had merely been combing the Madame’s hair when the comb got caught in a knot and she had tugged at it.
The Judge who investigated the complaint was Jean-Francoise Canonge, a close personal friend of the LaLaurie’s who in the past had always ensured that they were cleared of any charges brought against them whether professional or private but such was the severity of this case, involving as it did the beating and subsequent death of a child, that Canonge felt obliged to act. He fined the Madame $500 and confiscated her slaves putting them up for auction.
But this was not done with any serious intent, the fine was not collected, and very few of the slaves were sold and even of those that were most were bought by relatives and returned to her.
For a time things seemed to return to normal at the LaLaurie Mansion, lavish parties continued to be thrown and Delphine appeared as gracious as ever until at one such party on 10 April 1834, a fire broke out in the kitchen and began to quickly spread.

The guests were forced to abandon the house and fire fighters summoned but as they fought their way into the smoke filled kitchen they found two slaves chained to the stove who claimed to have started the fire deliberately despite the risk involved to draw attention to their plight.
As her neighbours converged on the house to help fight the fire Delphine’s own behaviour came under scrutiny. When she was asked – where are your servants, Madame? She replied, "Never mind my servants, you must save my valuables."
People were shocked by her lack of concern for those who may be inside. Her slaves were people after all. But where were they? All the doors to the Slave’s Quarters were locked and barred and with the Madame refusing to produce the keys the doors had to be broken down. What was found inside was to be described as a Chamber of Horrors.
On 11 April, the New Orleans newspaper The Bee described the scene:
“Several gentlemen impelled by their feelings demanded the keys which were refused them in a gross and insulting manner. Upon entering one of the apartments the most appalling spectacle met their eyes. Several slaves more or less horribly mutilated, were seen suspended from the neck, with their limbs apparently stretched and torn from one extremity to the other. Language is powerless and inadequate to give a proper recollection of the horror which a scene like this must have inspired.
These slaves belonged to a woman cast as a demon, and they had merely been kept alive to prolong their sufferings and to make them taste all that the most refined cruelty could inflict.”
The worst scene was reserved for the attic where it was said that the slaves discovered there had had their bodies broken and reshaped, women had been nailed to the floor and some were found with their lips sewn together. Buckets full of blood and gore were also found as were various dismembered body parts. Surviving slaves later described how they trembled with fear at the prospect of being taken to the attic because no one ever re-emerged.
The accounts of what occurred at the LaLaurie Mansion were perhaps lurid in the extreme but there is no doubt that Delphine mistreated her servants in such a vile way that it appalled a society where the mistreatment of slaves was commonplace. Even the hardened journalists at The Bee felt it inappropriate to dwell upon the particulars.
As the news of the events spread what had been public indignation soon turned to rage and angry crowds gathered outside the LaLaurie Mansion to vent their fury at this ‘wretched woman.’ At the same time the Authorities were compiling the case against her and they were particularly keen to investigate her relationship with the Voodoo Queen Marie Laveau who lived nearby.
Early in the morning on 14 April, Delphine emerged from the house with the intention of taking her usual carriage ride through the streets of New Orleans. She was as impeccably dressed as ever and seemed unperturbed by the mob as they hooted and shouted at her derisively from a distance.
Upon entering the carriage she drew the curtain across its window to block out the onlookers. It then dashed at breakneck speed away from the house careering through the streets and dispersing the crowd as it went. It was obvious that she was trying to escape. People shouted at her to be stopped and some tried but it was impossible to do so.
What became of Delphine LaLaurie remains a mystery.
It is believed that she fled to the North Shore near Lake Ponchartrain and took a ship to Mandeville and thence to France and a funeral epitaph was later discovered in Paris, it was broken and fragmented, but appeared to read: “Madame Delphine LaLaurie died 7 December 1842.”
Later renovations at the LaLaurie Mansion were said to have uncovered the remains of up to 70 victims.
It has since been suggested that Delphine’s husband Louis had been not only a willing participant but the main protagonist in the horror at the LaLaurie Mansion but so little is known of him that the evidence for such is scant. We do know that he was driving the carriage the day his wife escaped however, and that like his wife he was to disappear from the records thereafter never to be seen again.
Tagged as: Miscellaneous, Women
Share this post: