Posted on 15th January 2021
On 23 August AD 79, the good people of Pompeii were celebrating the Festival of Vulcan, the God of Fire, enjoying a glorious summers day unaware that for most of them it was to be their last.
Pompeii was a town of some 20,000 inhabitants situated on the shoreline of the Bay of Naples on the fertile flat-lands at the foot of Mount Vesuvius. It was a bustling and prosperous town in an area of Campania that was fast becoming the chosen playground of the rich. Indeed, the nearby town of Herculaneum was effectively a tourist resort and its landscape dotted with ever-increasingly extravagant villas.
Pompeii, more of a commercial centre than Herculaneum was replete with shops, roadside cafes, restaurants, brothels, had an amphitheatre for the holding of games and its own Gladiatorial School. Every summer the local population would be swelled to perhaps double its normal size and the area was prospering as never before.
The residents of Pompeii had lived beneath the brooding presence of Mount Vesuvius for many centuries and were used to earth tremors, some more destructive than others but rarely anything to fear. In fact, restoration work was still continuing in the town following a particularly destructive tremor that had hit the town some 15 years before in AD 63.
But what they were about to experience would be beyond their comprehension and nothing they had ever witnessed before. It would create panic and a great number of slaves, though the penalty for doing so was death, took this opportunity to flee and it was they who are likely to have survived the catastrophe for many hesitated to leave their homes or businesses, and their decision was to seal their fate. 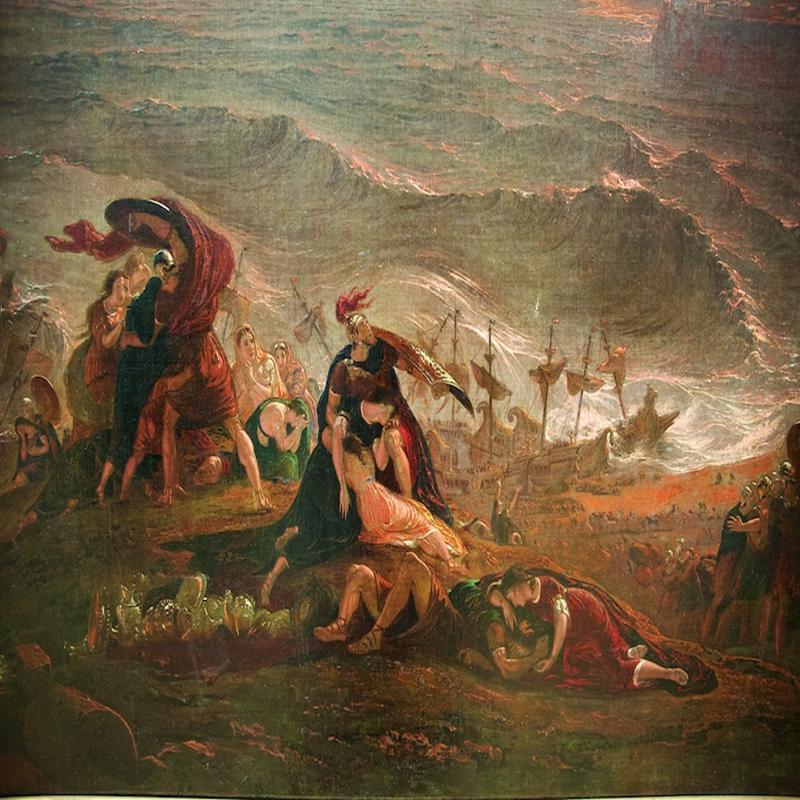 Propelled high into the atmosphere the boiling rock cools and solidifies and forms pumice stones. Some 30 minutes after Pompeii had been shrouded in darkness they began to fall in a hailstorm of lethal missiles upon the town and those who had not already fled were forced to take shelter in their homes and by mid-afternoon some 100 million tons of pumice and ash had fallen on Pompeii the sheer weight of which it now saw roofs begin to collapse burying the people inside.
The one man who might have understood what was going on was the 56 year old Gaius Plinius Secundus, better known as Pliny the Elder. He was the Commander of the Roman Fleet stationed at Misenum on the other side of the Bay of Naples. His passion in life was natural science. Indeed, he was the leading natural scientist of his day and his 37 Volume Natural History still survives to this day. But even he had not suspected that anything untoward was about to happen. His nephew, Gaius Plinius Caecilius Secundus, or, Pliny the Younger, who was staying with his uncle at the time was asked some 27 years later by the historian Tacitus to describe events:
"He was at Misenum in his capacity as Commander of the Fleet on 24 August, AD 79, when between 2 and 3 in the afternoon when my mother drew his attention to a cloud of unusual size and appearance. He had had a sunbath, then a cold bath, and was reclining after dinner with his books. He called for his shoes and climbed up to where he could get the best view of the phenomenon. The cloud was rising from a mountain - at such a distance we couldn't tell which, but afterwards learned that it was Vesuvius. I can best describe its shape by likening it to a pine tree. It rose into the sky on a very long trunk from which spread some branches. I imagine it had been raised by a sudden blast, which then weakened leaving the cloud unsupported so that its own weight caused it to spread sideways. Some of the cloud was white, in other parts there were dark patches of dirt and ash. The sight of it made the scientist in my uncle want to see it from closer at hand.
He ordered a boat be made ready. He offered me the opportunity of going along but I preferred to remain home and study. As he was leaving the house he was brought a letter from Tascius's wife Rectina, who was terrified by the looming danger. Her villa lay at the foot of Vesuvius, and there was no way out except by boat. She begged him to get her away. He changed his plans. The expedition that had started out as a quest for knowledge now called for courage."
Pliny ordered that the fleet be made ready to sail on what he intended to be a rescue mission. In the meantime, those beneath the dust cloud in Pompeii and Herculaneum began to cough, splutter, and could barely breathe as the moisture was progressively sucked from the air.
By 5 pm, Pliny's rescue mission was underway.

As he neared Herculaneum, which was even closer to Vesuvius than Pompeii he could see many hundreds of people had gathered on the beach. They were shouting, waving, and hoping to be rescued but the tides were against Pliny so he decided to sail onto Pompeii.
The town could barely be seen through the smoke and ash and Pliny's crew refused to sail on into the darkness. So he ordered them to head to where there was light, the port of Stabaiae.
Pliny, stranded at Stabaiae by the offshore wind stayed at the villa of a friend, Pomponianus, where he ate and calmly took a bath.
Whilst he waited for the wind to change molten lava five times hotter than boiling water surged from Mount Vesuvius towards the town of Herculaneum. Everyone and everything in its path including the people stranded on the beach were incinerated and turned to charcoal. Those who had been sheltering behind the thick walls of the boat houses had been killed when the thermal surge cloud settled on their bodies, their bones shattered, their soft tissue vaporised, and their brains boiled before exploding. Herculaneum was by now covered with 25 metres of molten lava.
The same pyroclastic surge that had devastated Herculaneum now headed for Pompeii but it was to stop short of the northern precincts of the town. The toxic gas which carried with it a deadly combination of carbon dioxide and hydrogen chloride did not, however.
Moments later Vesuvius exploded once again sending millions of tons of molten lava surging towards the town at more than 100 kilometres an hour. It would destroy everything in its path. But its effects would descend upon many of those still huddled in their homes long before the lava arrived. The hot air and gas was to fill their lungs as if they had inhaled fire, and the ash mixed with the fluid solidified turning their lungs to concrete. Those barely able to breathe stumbled through the streets in a last desperate attempt to escape and they took their valuables with them, bags of gold and boxes of jewellery. Some sought shelter in the Gladiatorial School believing that the strength and courage of the gladiators would protect them but were incinerated as the lava surge passed over them.
Yet, still one last horror still remained.
The bottom of Vesuvius now collapsed sending a black cloud of death across the Bay of Naples choking to death many of those who had earlier fled into the countryside believing they had escaped. Pliny, who had been waiting in Stabaiae for the wind to change, had rushed to the beach to witness the phenomenon and there he stood refusing to leave despite being begged to do so. Suddenly he collapsed dead, He was dead, asphyxiated by the gas.
Tagged as: Ancient & Medieval
Share this post: