Posted on 16th July 2021
The Druids were the spiritual leaders of the Celtic tribes of Britain and northern France. They left no written records of their activities and most of our evidence as to their being comes from the often hostile accounts left to us by Greek and Roman historians.
The Druids worshipped nature and unlike the Greek and the Roman they paid no account to stories of mythical heroes. God for them lay in the flora and the fauna, in the water of fast-flowing streams and the blessed mercy of the Sacred Oak. They prayed to the Sun and the Moon and worshipped the time of the tide and the changing of the seasons. The first written account of Druidical activity comes from Julius Caesar's Commentari de Bello Gallico or Commentaries on the Gallic Wars.
Caesar had invaded Britain in both 55 and 54 BC though on neither occasion did he stay long but he did encounter the Druids for possibly the first time and he describes them as being important in every aspect of Celtic Society and that they were held in such high esteem that their decisions would be final even in matters regarding their supposed lords and masters. It was even said that should they intervene in a battle being fough hostilities would immediately cease. So intrigued was Caesar that he went on to describe them in some detail:
"The Druids hold aloof from war, and do not pay taxes with the rest, they are excused from military service and exempt of all other liabilities. Young men in great numbers flocked to their ranks. In the schools of the Druids they learn a great number of verses, and therefore remain some twenty years in training. They do not commit these utterances to writing. I believe they have adopted this practice for two reasons; they do not wish the rule to become the practice, and reject the written word for the cultivation of the mind. The cardinal doctrine they seek to teach is that souls do not die. They believe in the indestructibility of the human soul, which according to their belief, merely passes at death from one tenement to another. By such doctrine alone this robs death of all its terrors. Fear of death is thereby cast aside, they hold this to be the greatest incentive to valour. They also hold many discussions touching upon the stars and their movements, the size of the universe, and of the earth, and the order of nature."
The Romans accused the Druids of human sacrifice and according to Caesar the victims were mostly those convicted of wrongdoing. If this was so then they were executions and the death penalty was hardly unknown in the ancient world. But in the case of the Druids the executions would be carried out as part of a religious ceremony. 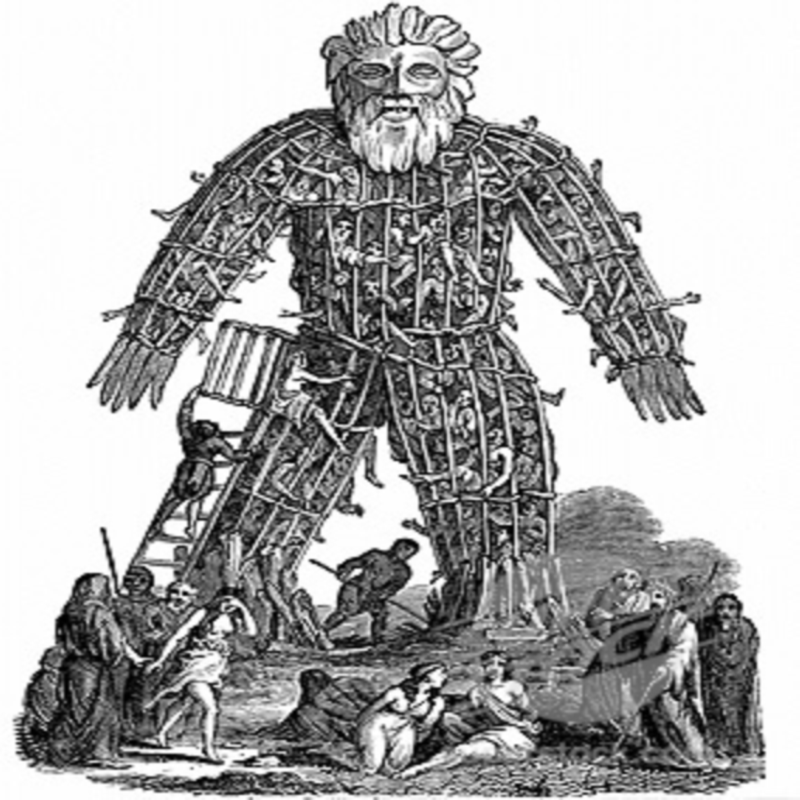 Often the victims would be imprisoned within a wooden effigy known to us now as the Wicker Man, and burned alive. Another form of sacrifice was known as the "threefold death." The victim would endure near strangulation and virtual drowning before finally being stabbed to death. These human sacrifices would be committed in honour of the Gods Esus (Lord) Taranis (Thunderer) and Teutates (Protector).
The Druids also believed that they could foretell the future. The historian Pliny wrote that:
"These men predict the future by observing the flights and calls of the birds, and by the sacrifice of holy animals: all orders of society are in their power and in very important matters they prepare a human victim, plunging a dagger into his chest, by observing the way his limbs convulse as he falls and the gushing of his blood they are able to read the future." 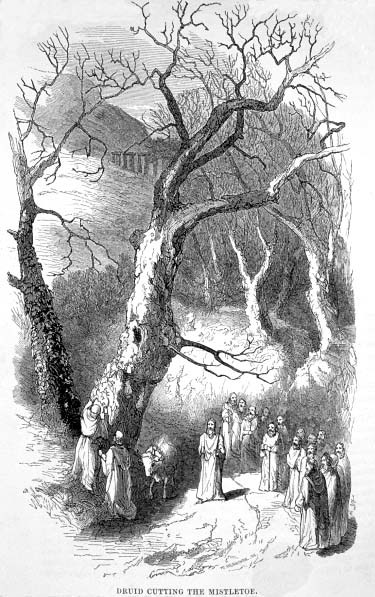 Another Druidical ceremony much commented upon was the Ritual of the Mistletoe and the Oak. Pliny remarks that: "Mistletoe is rare and much sought after, and when it is found it is gathered with the greatest solemnity." It would be cut from the trees with considerable tenderness so as not to damage it as people gathered around and chanted prayers. It was also believed to be an antidote to poison and an aid to fertility.
Stonehenge in Wiltshire, built around 3100 BC, is believed to have been a major centre of Druidical religious ceremony, though no one knows exactly what. As such, theories abound as to its real purpose. Some believe that the large perpendicular stone columns were designed for lunar worship, and given Caesar's statement that the Druids were interested in astronomy this remains a distinct possibility. Others have suggested that it was a site of mass human sacrifice, but given that no human remains have ever been uncovered at the site this seems unlikely.
To the Druids the forest was sacrosanct and they dwelt and worshipped in the Sacred Groves. The Greek historian Lucan Pharalis wrote that:
"The inner-most groves of far-off forest are your abodes."
And where there were no groves the Druids would build their own, usually atop a hill which they would surround with banks and ditches. 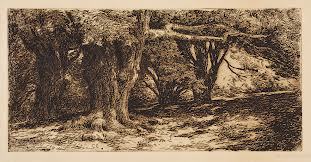 Out of the mists and darkness of these groves the influence of the Druids spread far and wide. It was not permitted to hunt and kill an animal in the forest because the God's dwelt there and few entered who were not members of the Order.
The Romans believed the Druids to be not just augurs and priests but also sorcerers and magicians. From their ranks came the bards, the singers, poets, keepers of the oral history of their people, and the O'vateis, diviners of the natural world.
The Druids presided over the frequently held ritual banquets that were so popular in Celtic society, ceremonies at which the entire village or tribe would attend and that would invariably culminate with the blood sacrifice of a bull. They also served as Judges and according to Caesar their verdicts were preserved in documents which would appear to contradict the long held view that the Celts had no written language. They would also be present on the field of any battle though they did not take up arms themselves, instead whipping the combatants into a state of frenzy with their chants and imprecations. There is no doubt that the Romans feared the influence and power of the Druids.
Britain was finally occupied, if never entirely subdued, following the invasion of the Emperor Claudius in AD 43. This was only achieved over the heroic resistance of Togodumnus and Caractacus, two Princes of the Catevellauni Tribe.Indeed, Caractacus was to resist for seven long years before being finally defeated at the Battle of Caer Caradoc in October AD 54.
Under the Emperor Tiberius and later Caligula the activities of the Druids in Roman occupied Gaul were prohibited and during the reign of Claudius it had carried a sentence of death. For too long the Druids had been the focal point of resistance to Roman rule and none more so than in Britain.
In AD 61, during the reign of the Emperor Nero, the Roman Governor of Britain Gaius Seutonius Paulinus, decided to destroy the power and influence of the Druids once and for all. He pursued them all the way to their stronghold on the Isle of Mona or Ynes Mon in Anglesey, Wales.
The historian Tacitus describes the assault and how the Roman troops froze in horror upon witnessing the sound and sight of the Druids shrieking imprecations their arms uplifted to the skies:
"On the beach stood the adverse array, a serried mass of arms and men, with women flitting between their ranks. In the style of the Furies, in robes of deathly black and with dishevelled hair, they branded their torches while a circleh of Druids called forth terrible imprecations upon the heads of the invaders. The troops were struck with such awe at the extraordinary spectacle that their limbs were paralysed with fear, so much so that they exposed their bodies to wounds without any attempt at movement. Then reassured by their General, and inciting each other never to flinch from women and fanatics, they charged behind the Standards and cut down all who met them, and enveloped them in their own flames.
Their groves, devoted to inhuman superstitions were destroyed. They deemed it their duty to cover their altars with the blood of captives and to consult their deities through human entrails.”

A great massacre occurred on the Isle of Mona. The Sacred Groves were cut down, burned, and destroyed. No one captured was spared. But perhaps the terrible curses of the Druids had come true for whilst securing his victory over the largely unarmed and defenceless Druids word had reached him of rebellion elsewhere. In his absence the Iceni Tribe under their Warrior Queen Boudicca had begun a furious assault upon Roman Britain.
Despite the fact that Boudicca had recently had to endure humiliation at the hands of the brutal and arrogant Seutonius Paulinus that included witnessing the rape of her daughters by Roman soldiers recent evidence also suggests that Boudicca’s revolt was neither the result of mere anger or opportunism but was a deliberate tactic to draw Seutonius Paulinus away from his assault upon the Druids and that Boudicca may in fact a Druid herself.
If this was indeed the case then it worked for many Druids did indeed escape the massacre.
The Iceni along with their allies had annihilated the famous 9th Legion, killed thousands of Romans and burned to the ground Colchester, St Albans, and London before they were finally defeated.
In his pursuit of the Druids Seutonius Paulinus had very nearly lost Britain for Rome and he was later withdrawn and replaced as Governor by someone willing to work with rather than against the tribes.
Boudicca’s revolt may have been the Druids last stand but the Romans would draw the lesson from it and assimilation rather than confrontation would become their policy.
The influence of the Druids ensured that the Island of Britannia would never be fully conquered or Romanised creating a trait of stubborn independence that can be traced even to this day.
Tagged as: Ancient & Medieval
Share this post: