Posted on 26th March 2021
He was a boy who wanted to be a girl, the Emperor Elagabalus, Queen of Rome.
In AD 217, the brutal and rapacious Emperor Caracalla became the victim of an assassination plot when he was murdered by his bodyguard as he urinated up against a wall. He had not it seemed rewarded the Praetorian Guard sufficiently enough to guarantee their loyalty and his own safety. The beneficiary of his murder was the Prefect of the Guard Marcus Opellius Macrinus who replaced him as Emperor but outside of the 6,000 troops he had under his command he had little support.
Aware of this he was quick to banish the remaining members of the Imperial Family from Rome but this did little to reduce or diminish the desire on the part of some to see him removed. Macrinus had no legitimate claim to the Imperial Purple after all, and revenge is a powerful motivation. The former Emperor’s aunt Julia Maesa now used her immense fortune to bribe the Legions into supporting the claim of her 14 year old grandson Elagabalus.
Conspiring with her grandson’s tutor, the eunuch Gannys, they eventually persuaded Publius Valerius Comazon the Commander of the Third Legion to openly declare in his favour. The revolt quickly spread and there seemed little Macrinus could do when the troops he sent to quell the rebellion promptly defected upon the offer of a substantial reward for doing so. Learning of this a furious Macrinus took personal command of his army and led it east to confront the rebels and decide the matter once and for all. But the reports he had received were true his troops could be bought and were whether he was present or not and at the ensuing Battle of Antioch they simply melted away. Macrinus fled but was soon overtaken and killed. His death was particularly satisfying for Julia Maesa whose sister he’d earlier had executed. 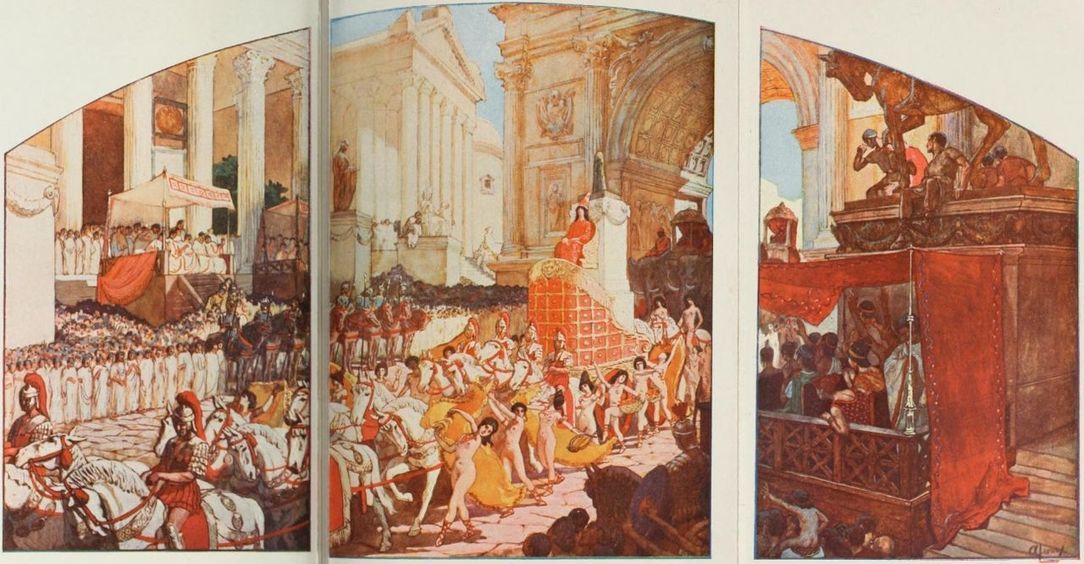 Varius Ativus Bassianus declared Emperor Elagabalus on 8 June, AD 218, was Phoenician by birth and had been raised in the Syrian city of Emesa. Despite having had little experience of Rome he was a member of the Severan Clan and therefore of Royal blood. He was also the hereditary High Priest of the cult of the Sun God El Gabal, or Baal, from whom he took the name Elagabalus.
His reign as Emperor got off to a bad start when he imposed his religion on the people of Rome. He called it Deus Sol Invictus and he ordered that its worship replace that of the Roman Supreme God Jupiter. The people were in uproar, to offend a God as powerful as Jupiter was tantamount to bringing a curse upon the city but when at the festival to celebrate the new God he handed out free food and wine the people’s sense of grievance cooled. The same could not be said of the Roman elite however, and their resentment was only made worse when he removed all Rome’s Holy Relics from their shrines and housed them instead in his newly-built Elagabalum where the Black Stone of El Gabal was so positioned that only the one religion could be seen and worshipped.
He caused further outrage by marring the Vestal Virgin Aquila Severa. This had broken all taboos for a Vestal Virgin was expected to remain chaste for at least thirty years and then had to receive permission to relinquish her vows. The Vestal Virgins were a sacred institution and to violate one was a heinous act. If a Vestal broke her vows and committed a sexual act then the punishment was that she be buried alive; if a man had sex with a Vestal then he was to be whipped to death. Seemingly Elagabalus was untroubled by such details.
During his short life the young Emperor was to marry five times but he had little sexual interest in women he just appeared to enjoy the ceremony. The true love of his life was a blond slave and charioteer named Hierocles whom he would refer to as his husband and he liked to be addressed as – the mistress, the wife, or the Queen of Hierocles. 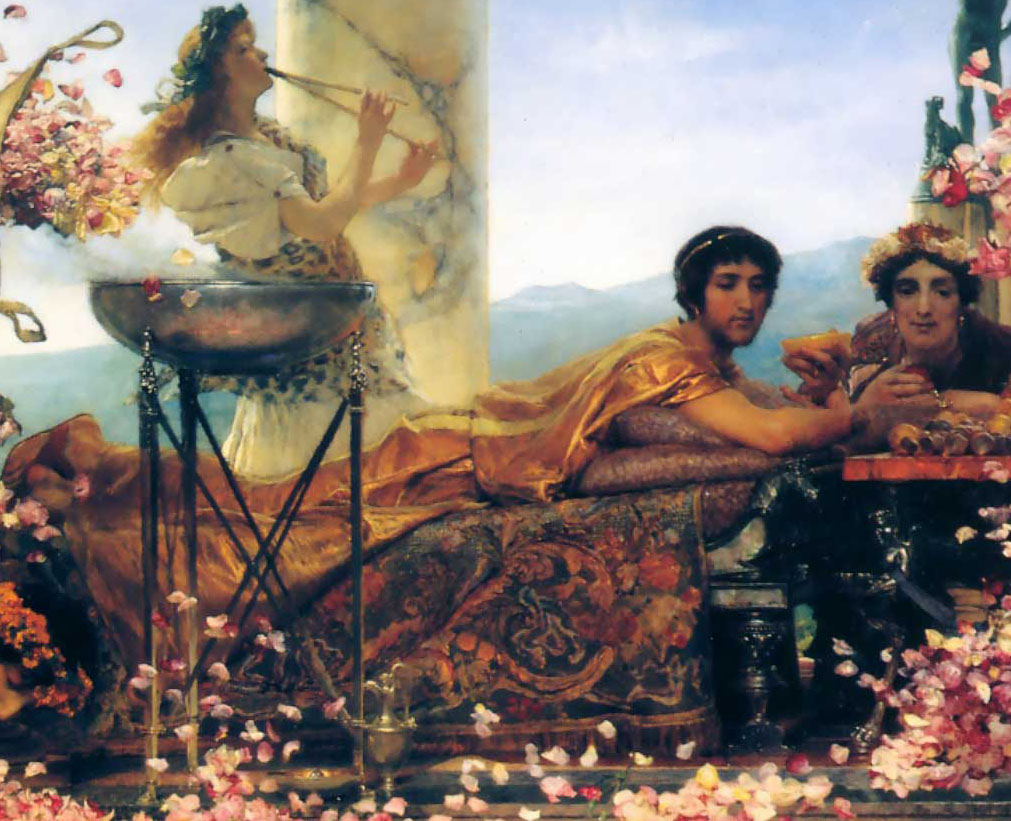 He made no attempt to disguise his homosexuality and the more he flaunted it the greater the offence it caused. After a while he came to enjoy his flagrant disregard of public morals and his subsequent behaviour became ever more outrageous and on one occasion he even married an athlete named Zoticus in a great public ceremony where he took the role of the bride. It was as if he deliberately set out to provoke those who disapproved of his behaviour while he would become angry whenever reproved for wearing too much makeup.
The historian Cassius Dio wrote of him:
“He would paint his eyes, epilate his hair, and wear wigs before prostituting himself in taverns and brothels.” He continued, “Finally, he set aside a room in the Palace and there committed his indecencies, always standing nude at the door of the room like harlots do, and shaking the curtain which hung from gold rings, while in a soft and melting voice he solicited passers-by.”
He also had a masochistic streak and liked to play a game where he would be caught having sex by a boyfriend who would then whip him for his adultery. Indeed, it was often remarked upon just how bruised his body would be. He also enjoyed killing and torture and delighted in finding new ways of doing so. It was said how he would peel the skin from victims and then rub salt into the wounds, or have prisoners placed in a cage to be eaten alive by wild animals. 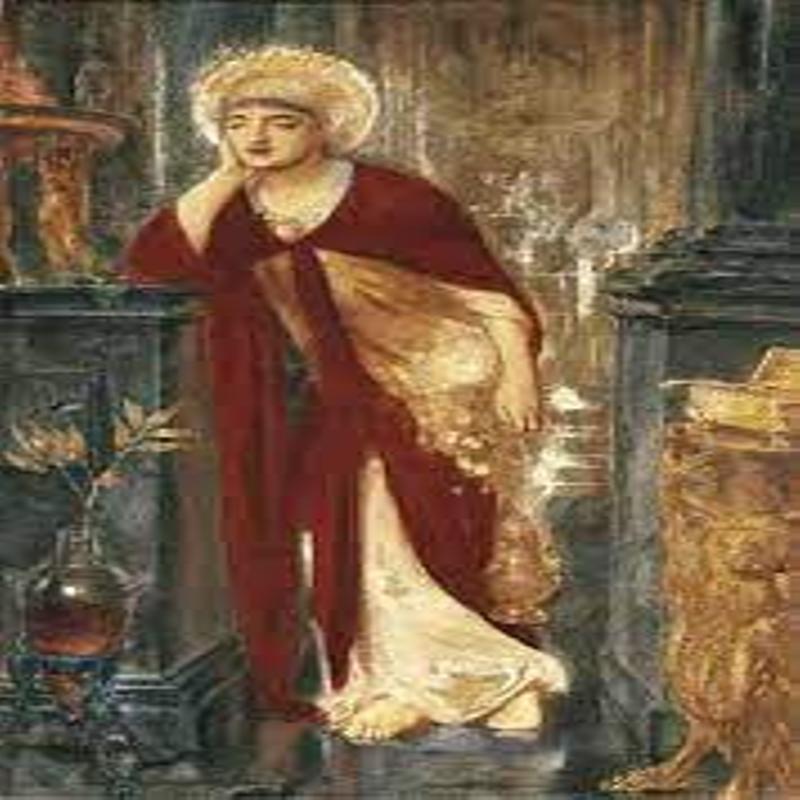 He was acutely aware of his femininity and hated to be addressed in the masculine. Those who refused to subscribe to this view of him as the Queen of Rome ran the serious risk of execution. He also offered a fortune to any doctor who could provide him with female genitalia but with the proviso that if they failed to do so they too would face torture and death.
Publius Valerius Comazon, who had effectively been running the Empire from his position as Consul while Elagabalus indulged his fantasies desperately tried to get the young Emperor to moderate his behaviour but having failed to do so he soon lost all respect, and wanted rid of him. Likewise, so did many others.
The Legions offended by his behaviour were in tumult, the Praetorian Guard despite the riches he had lavished on them had turned against him and even his grandmother Julia Maesa, who had been pivotal in making him Emperor in the first place now changed her mind.
Worried that the Praetorian Guard might take matters into their own hands she now looked to her other grandson the thirteen year old Alexander Severus and she persuaded Elagabalus to shower him with honours and make him a Consul, even though he was still only a boy, and name him as his designated successor. Elagabalus was too naive to see what Julia Maesa had in mind but his mother Julia Soaemias, was not.
She had been the power behind the throne and had been responsible for implementing the religious changes and it was on her advice that Elagabalus now stripped his cousin Severus of all his honours and revoked his consulship. Upon learning that the Praetorian Guard favoured his cousin over himself he decided to test the water and he had the rumour spread that Severus had been injured in a fall and was close to death. It was a catastrophic error of judgement.
Most people thought that if Severus had been hurt then it must have been Elagababus who was responsible and they reacted angrily. Riots began to break out in the city and Elagabalus ordered the Praetorian Guard to restore order but they refused and instead demanded that he and his mother along with Severus, as proof hat he was still alive, appear before them. Elagabalus was afraid to do so but he had little choice.
On 11 March AD 22, Elagabalus and Julia Soaemias arrived at the Praetorian Guard barracks where they received a frosty reception while the young Severus was cheered and applauded. A furious Elagabalus demanded that those who had cheered his cousin be arrested at once. Instead they turned on their Emperor and Elagabalus and his mother were forced to flee in panic.
The terrified pair, often holding hands, where pursued through the streets of Rome but did not get far. Chased into a public lavatory Julia Soaemias held her son in a tight embrace until physically when Elagabalus could be heard screaming repeatedly, “Let my mother be, leave her alone.” There was to be no mercy however, as both were run through and decapitated before their bodies stripped naked were dragged through the streets of Rome band thrown unceremoniously into the River Tiber.
In the orgy of violence tat followed those close to Elagabalus were also hunted down and killed including Hierocles, Zoticus, and Comazon.
Elagabalus was not unique in the history of Rome for his cruelty and outrageous sexual behaviour but he is unique for being the Empires only transgender Emperor and self-declared Queen.
Tagged as: Ancient & Medieval
Share this post: