Posted on 26th January 2021
On the night of 19 July 64 AD, a fire broke out near the Circus Maximus in the centre of Rome that was to rage for six full days unimpeded devastating the city and leaving hundreds of thousands of people without means, homeless and on the streets. It was the worst disaster to ever strike the city and few believed it to have been an accident - someone must be to blame?
Despite having done his best to alleviate the suffering caused by opening up the Imperial Gardens, providing temporary shelters and organising food shipments to the city the rumour soon began to spread that Emperor Nero had started the fire deliberately to make way for his opulent new Golden House.
Given Nero’s reputation it was a rumour easily believed so he sought to deflect blame and he knew a good scapegoat when he saw one and the Christians were a small but vocal religious sect despised by many Roman’s for their arrogant denial of their Gods - they were to blame declared Nero and their leaders were arrested and tortured until they confessed. Nonetheless, many remained sceptical but Nero was nothing if not the great and impresario he was knew how to overcome such doubts - he would have the Christians killed in the most theatrical manner he could conjure up for the entertainment of the mob.
The historian Tacitus was just a boy in Rome at the time but he remembered the events well and many decades later would write of them in his Annals, or History of Rome: 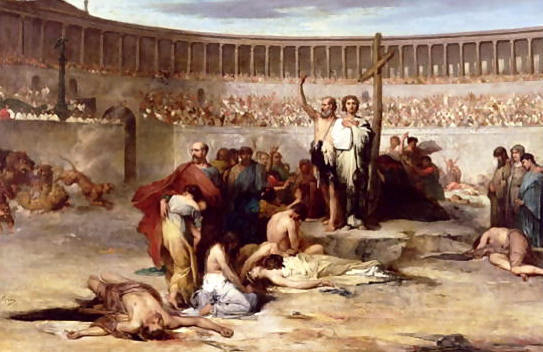 Therefore, to stop the rumour, he falsely charged with guilt, and punished with the most fearful tortures, the persons commonly called Christians, who were hated for their enormities. Christus, the founder of that name, was put to death as a criminal by Pontius Pilate, procurator of Judea, in the reign of Tiberius, but the pernicious superstition - repressed for a time, broke out yet again, not only through Judea, - where the mischief originated, but through the city of Rome also, whither all things horrible and disgraceful flow from all quarters, as to a common receptacle, and where they are encouraged. Accordingly first those were arrested who confessed they were Christians; next on their information a vast multitude were convicted, not so much on the charge of burning the city, as of hating the human race.
In their very deaths they were made the subjects of sport: for they were covered with the hides of wild beasts, and worried to death by dogs, or nailed to crosses, or set fire to, and when the day waned, burned to serve for the evening lights. Nero offered his own garden players for the spectacle, and exhibited a Circensian game, indiscriminately mingling with the common people in the dress of a charioteer, or else standing in his chariot. For this cause a feeling of compassion arose towards the sufferers, though guilty and deserving of exemplary capital punishment, because they seemed not to be cut off for the public good, but were victims of the ferocity of one man.
Tagged as: Ancient & Medieval, Fact File
Share this post: