Posted on 4th June 2021
Born on 6 February 1912 in Munich the daughter of a schoolteacher and a seamstress, Eva Paula Braun, often described by those who knew her as a ‘simple girl’ contributed little to the society around her it seemed but would be written into the pages of its history nonetheless for reasons of love, devotion and a final act of sacrificial self-immolation.
Raised a Catholic she impressed few at her Convent School with her academic abilities being an average student at best but imbued with a love of the outdoors and a comfort with her own body she excelled in athletic pursuits particularly gymnastics.
By the age of 17 she was working as a sales assistant in the photographic studio of Heinrich Hoffmann who was the official photographer for the National Socialist German Workers’ Party, or Nazi Party. Although Eva’s actual work had little to do with the photographic process it was something in which she took a keen interest but she was to take an even keener interest in the subject of much of Herr Hoffmann’s work.
She first met Adolf Hitler in October 1929, at a time when the Nazi Party was not a significant force in German politics having received just 2.6% of the vote in the previous year’s Federal elections. Indeed, Hitler with his clipped moustache, often fixed gaze and exaggerated mannerisms was seen by many as a comic figure but not by Eva who was immediately spellbound by this small man in an oversized trench-coat who was 23 years her senior. She was to write to her sister of their first meeting: “I remember him desiring me with his eyes.” Whether Hitler recalled it in quite the same manner remains unknown for he was already in love with politics, the pursuit of power, and his young niece, Geli Raubal. 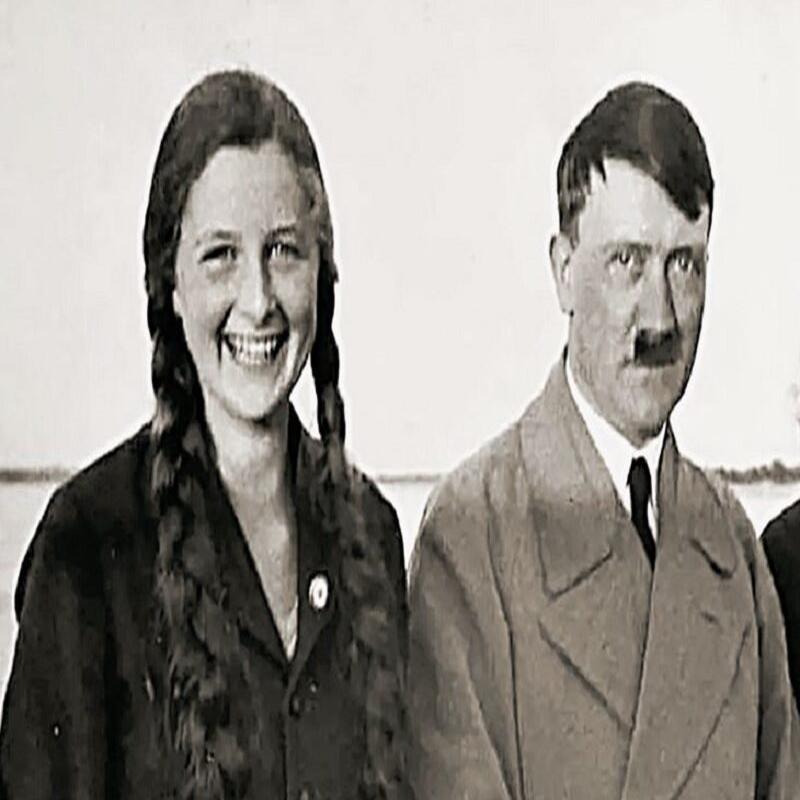 Geli was the ebullient 20 year old daughter of Hitler’s half-sister Angela who would later become his housekeeper and Hitler’s love for her was paranoid, controlling and bordered on the obsessional – he would determine where she would be at any time of the day and issue her with written instructions on how to behave. When she expressed a wish to travel to Vienna to take singing lessons she was forced to abandon her studies. Upon learning of her burgeoning friendship with his chauffeur Emile Maurice, Hitler had him dismissed from his service and Geli placed under constant surveillance.
In early 1929, he moved her into his apartment on the Prinzeregentplatz but his affection for Geli was not reciprocated nor were they exclusive for even as he kept her under effective armed guard he was already beginning his affair with Eva Braun.
Hitler enjoyed the company of young women it seemed, but not perhaps for the reasons we might imagine. He once commented: “Nothing is more enjoyable than educating a young thing – a girl of eighteen or twenty – as pliable as wax.”
But his ego should also not be ignored and he simply loved to be adored in time becoming Germany’s most eligible bachelor, a status he revelled in. Indeed, he would later say how he could never marry as he was already betrothed to the nation as well as it seems wed to his own vanity. But he also believed that emotional attachment was a sign of weakness. In the case of Geli Raubal he made an exception however, taking pride in having her at his side. He took her with him to meetings they even on shopping trips together.
Described as plain and plump but with great warmth and charm Geli dressed modestly, rarely spoke out of turn and made little use of cosmetics which Hitler frowned upon in any case - she was in many respects his perfect German maiden.
On 19 September 1931, she was found dead in her room from a gunshot wound to her chest.
The official verdict was suicide, it being surmised that Geli had taken Hitler’s Walther pistol and turned it on herself but the rumour persists that he had murdered her in a rage after she had confronted him about the contents of a letter from Eva Braun she had found in his coat pocket.
Hitler did not attend Geli’s funeral but would later pay his respects at her graveside and preserve her room in his apartment as a shrine to her memory. But did she take her own life? When Otto Strasser the brother of Gregor Strasser who was viewed by many as the only credible rival to Hitler for control of the Nazi Party until his murder in June 1934 during the Night of the Long Knives, was interrogated by American doctors who were seeking greater knowledge of Hitler’s private life. He eagerly provided details of his relationship with Geli Raubal.
He claimed that Hitler was a sexual pervert and that Geli had killed herself unable any longer to bare the humiliation of their time together that included having to urinate upon Hitler’s bare chest and face, and to defecate in front of him while he watched. Strasser’s accusation of sexual deviancy on the part of the future Fuhrer were supported by Geli’s former SS Guard Wilhelm Stocker who reported that she told him that Hitler was impotent and forced her to do things that made her physically sick, though she did not elaborate.
But Strasser, who had seen his brother murdered and had been forced to flee for his own life certainly had an axe to grind. His accusations have to be treated with scepticism. It suited the purpose of Allied propaganda to imagine and promote Hitler and indeed the entire Nazi hierarchy as sexually dysfunctional and perverted; that moral corruption in politics and civil life along with the distortion of science for inhuman ends must inevitably be reflected in the physical relationships between its adherents.
Moral corruption does not exist in a vacuum of course, and is often reflected in a person’s sexuality – Julius Streicher’s sadism, Hermann Goering’s transvestism – but it is not invariably so and it is probable that Hitler, though of limited libido enjoyed ‘normal’ sexual relationships as many of those who were in a position to know would later report.
Adolf and Eva were not a couple made in heaven, she was lively and outgoing, liked to drink and loved to dance while he abstained from such things. They did share a love of the movies and he would delight her with his promise to make a movie of their life together in which she could play herself. He would complain that she wore too much makeup and perfume but ceased trying to dissuade her from doing so once he realised the lavishing of such fripperies upon her was an effective means of control.
Eva’s sisters were excited by her relationship with Hitler but no so her father Fritz, a deeply conservative man who sought a good marriage for his daughters and saw little future for Eva with a man of no background so much older than herself and who he regularly referred to as that Austrian tramp. All this would change once Hitler became Fuhrer, however..
Scandalised by Geli and understanding the allure of power Hitler wished to be seen as chaste and available to the women of Germany not just for reasons of state but also self-validation. He would then keep his relationship with Eva a closely guarded secret. 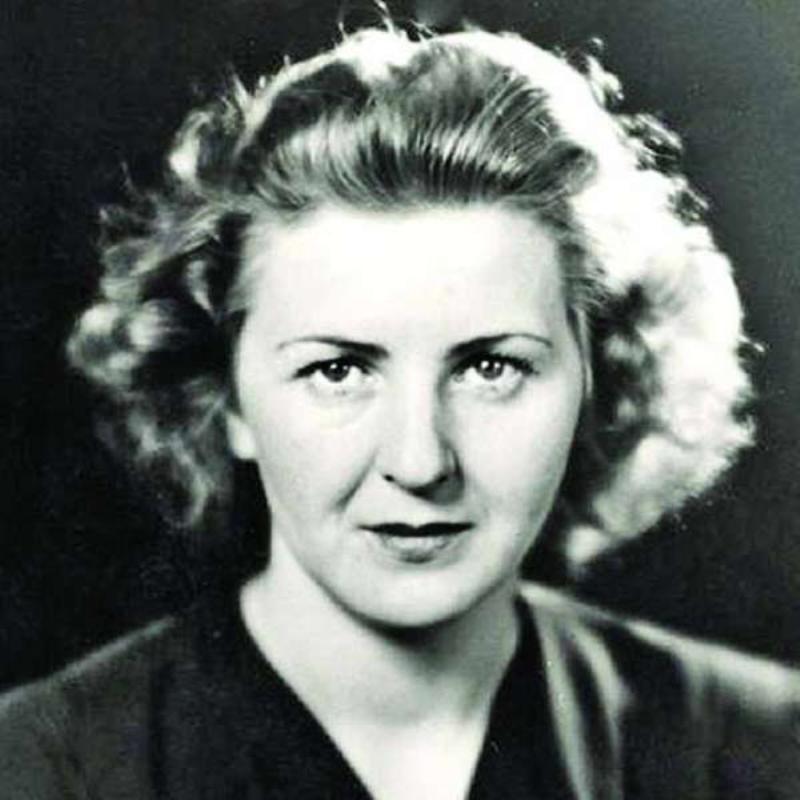 No doubt Eva provided solace for Hitler in times of stress but for her to be ushered from his presence at a moment’s notice regularly shunted from room-to-room, house-to-house and shut away for weeks on end was difficult to take. She was in some distress, not that Hitler noticed.
On 11 August 1932, in an eerie sequel to Geli Raubal’s apparent suicide Eva took her father’s pistol and shot herself in the chest. The bullet missed all her vital organs which led some to believe that it was never a serious attempt to end her life but merely a means to get Hitler’s attention. If so, then it worked. On the cusp of power and fearing another scandal Hitler rushed to her bedside where he promised to be more sensitive to her feelings in the future. A little later she was promoted by her employer Hoffman to photographer so she could accompany Hitler on his official visits and was provided with rooms in his Munich apartment. Scandal was avoided and on 30 January 1933, despite a decline in the Nazi Party vote and remaining a minority within the Reichstag Hitler was appointed Chancellor of Germany.
Busy cementing his power and establishing a dictatorship Hitler, despite his fine words and perhaps best intentions, found even less time for Eva. His neglect of her and the inattentive manner he often adopted in her presence was to result in a second suicide attempt in May 1935, when she overdosed on sleeping pills. Once again Hitler cancelled all his engagements and hurried to be at her side to comfort and reassure her.
She was to be provided with an apartment within the Reichstag and rooms at his country retreat the Berghof so in future wherever Hitler was resident she would be also. He also lavished money on both Eva and her family.She was happy at last and was to say repeatedly to anyone who would listen: “I am the mistress of the greatest man in the world.”
Eva was now able to indulge her love of fine clothes scrupulously noting down her latest purchases from the fashion houses of Paris and Milan, she also shopped regularly in Berlin’s finest Department Stores displaying a penchant for jewellery and baubles of all kinds, she attended concerts and the theatre with her friends, and delighted in holidays with her family at expensive spas and in stylish hotels – all at no cost. Her father now joined the Nazi Party.
Hitler never tried to wield the same control over Eva he had over Geli Raubal relying instead upon her discretion and devotion aware that the largesse she received from him provided a convenient distraction.
At the closely guarded Berghof situated in the Bavarian Alps with its stunning scenery and fenced off from the outside world Adolf and Eva entertained before retiring to their separate rooms joined by a connecting door. Public displays of affection between them remained strictly off-limits, however. Still, Eva had never been happier and most of the photos and film footage we have of life at the Berghof were either taken by her or at her request. 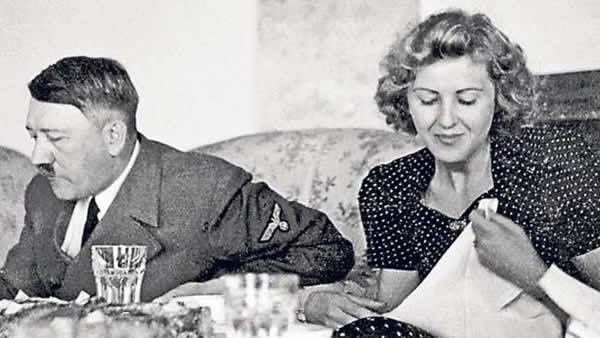 The images preserved reveal a young woman in love with life and the outdoors, sunbathing, picking flowers, performing gymnastics and romping with friends – and for the home movies at least often seen in the same frame as the Fuhrer.
Her family and friends were regular visitors and Eva indulged herself without restraint having her hair set every morning, changing her clothes three or even four times a day – she cycled, she danced, she drank champagne and at night she would watch the latest Hollywood musicals.
In the company of powerful men in splendid uniforms, waited on hand-and-foot and surrounded by snow capped mountains it was an idyllic life, a Ruritanian fantasy land and an oasis of calm amid the tumult of war; but following the German invasion of Russia it also became a deeply frustrating time for Eva who rarely saw the Fuhrer ensconced as he was at his Wolf’s Lair Headquarters in East Prussia. 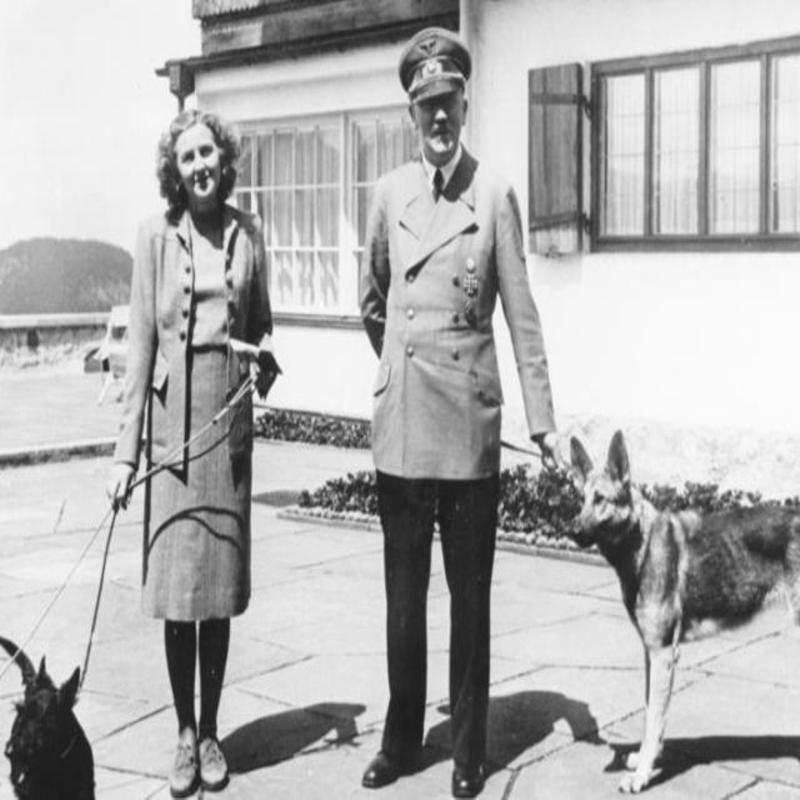