Posted on 10th February 2021
On the night of 23 May 1940, Lord Gort, Commander of the British Expeditionary Force, recognising that the battle for northern France was lost ordered that it withdraw to the port of Dunkirk for possible evacuation despite having received instructions to the contrary. It was a brave decision, but it was also the right decision. The military situation was stark and his army was in danger of being cut off and destroyed. So, a perimeter was created, a corridor carved out and a desperate rearguard action fought as hundreds of thousands of men hurried towards a port already under bombardment to take refuge among the sand dunes and burned out buildings hoping for rescue.
Even the most optimistic estimate suggested no more than 40,000 could be safely evacuated before the city fell when on 24 May, Adolf Hitler ordered his Panzer Divisions to halt. It provided time, precious time, and the order went out for every available craft of shallow draft to assemble at the Channel ports, the soon-to-be famous ‘Flotilla of Little Ships.’
Operation Dynamo was underway and a miracle of deliverance would follow.
Arthur Devine manned a boat that ferried troops from the beach to larger vessels further offshore. This is his description of events:

"It was the queerest, most nondescript flotilla that ever was, and it was manned by every kind of Englishman, never more than two men, often only one, to each small boat. There were bankers and dentists, taxi drivers and yachtsmen, boys, engineers, fishermen and civil servants. . .
It was dark before we were well clear of the English coast. It wasn't rough, but there was a little chop on, sufficient to make it very wet, and we soaked the Admiral to the skin. Soon, in the dark, the big boats began to overtake us. We were in a sort of dark traffic lane, full of strange ghosts and weird, unaccountable waves from the wash of the larger vessels. When destroyers went by, full tilt, the wash was a serious matter to us little fellows. We could only spin the wheel to try to head into the waves, hang on, and hope for the best.
Even before it was fully dark we had picked up the glow of the Dunkirk flames, and now as we drew nearer the sailing got better, for we could steer by them and see silhouetted the shapes of other ships, of boats coming home already loaded, and of low dark shadows that might be enemy motor torpedo boats.
Then aircraft started dropping parachute flares. We saw them hanging all about us in the night, like young moons. The sound of the firing and the bombing was with us always, growing steadily louder as we got nearer and nearer. The flames grew, too. From a glow they rose up to enormous plumes of fire that roared high into the everlasting pall of smoke. As we approached Dunkirk there was an air attack on the destroyers and for a little the night was brilliant with bursting bombs and the fountain sprays of tracer bullets.
The beach, black with men, illumined by the fires, seemed a perfect target, but no doubt the thick clouds of smoke were a useful screen.
The picture will always remain sharp-etched in my memory - the lines of men wearily and sleepily staggering across the beach from the dunes to the shallows, falling into little boats, great columns of men thrust out into the water among bomb and shell splashes. The foremost ranks were shoulder deep, moving forward under the command of young subalterns, themselves with their heads just above the little waves that rode in to the sand. As the front ranks were dragged aboard the boats, the rear ranks moved up, from ankle deep to knee deep, from knee deep to waist deep, until they, too, came to shoulder depth and their turn.
The little boats that ferried from the beach to the big ships in deep water listed drunkenly with the weight of men. The big ships slowly took on lists of their own with the enormous numbers crowded aboard. And always down the dunes and across the beach came new hordes of men, new columns, new lines. 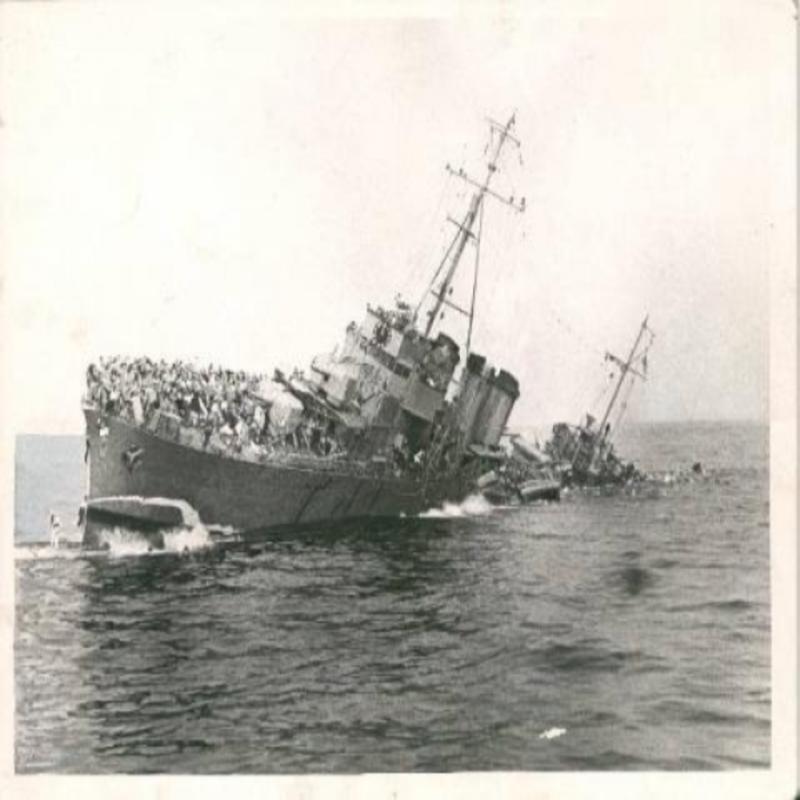 On the beach was a destroyer, bombed and burned. At the water's edge were ambulances, abandoned when their last load had been discharged.
There was always the red background, the red of Dunkirk burning. There was no water to check the fires and there were no men to be spared to fight them. Red, too, were the shell bursts, the flash of guns, the fountains of tracer bullets.
The din was infernal. The 5.9 batteries shelled ceaselessly and brilliantly. To the whistle of shells overhead was added the scream of falling bombs. Even the sky was full of noise - anti-aircraft shells, machine-gun fire, the snarl of falling planes, the angry hornet noise of dive bombers. One could not speak normally at any time against the roar of it and the noise of our own engines. We all developed 'Dunkirk throat,' a sore hoarseness that was the hallmark of those who had been there.
Yet through all the noise I will always remember the voices of the young subalterns as they sent their men aboard, and I will remember, too, the astonishing discipline of the men. They had fought through three weeks of retreat, always falling back without orders, often without support. Transport had failed. They had gone sleepless. They had been without food and water. Yet they kept ranks as they came down the beaches, and they obeyed commands. . .
We stayed there until everybody else had been sent back, and then went pottering about looking for stragglers. While we were doing that, a salvo of shells got one of our troopships alongside the mole. She was hit clean in the boilers and exploded in one terrific crash. There were then, I suppose, about 1000 Frenchmen on the mole. We had seen them crowding along its narrow crest, outlined against the flames. They had gone out under shellfire to board the boat, and now they had to go back again, still being shelled. It was quite the most tragic thing I ever have seen in my life. We could do nothing with our little park dinghy.
Going home, the Jerry dive bombers came over us five times, but somehow left us alone though three times they took up an attacking position. A little down the coast, towards Gravelines, we picked up a boatload of Frenchmen rowing off. We took them aboard. They were very much bothered as to our 'ship' and, said quite flatly that it was impossible to go to England in a thing like ours.
Tagged as: Fact File, War
Share this post: