Posted on 26th January 2021
St Petersburg was in turmoil, there were street protests daily, bread riots were commonplace and the troops had refused to fire on the people. So bad had the situation become that the Tsar had no choice but to leave Army Headquarters at Mogilev and return to his capital to try and restore order but he was too late On 15 March 1917, the Imperial Train was halted on its way to St Petersburg and the Tsar forced to abdicate. On the orders of the new Provisional Government he and the Imperial Family were then placed under house arrest.
Treated with all due deference it seemed at first it might be a benign captivity but it soon became considerably harsher when they had to be moved to Tobolsk in Siberia for their own safety and would change altogether when the Bolsheviks under Vladimir Lenin seized power in October 1917. Attitudes toward the Imperial Family now hardened; they were stripped of their household retinue and made to wear plain clothes, forced to live on soldiers rations and were regularly mocked by their guards. 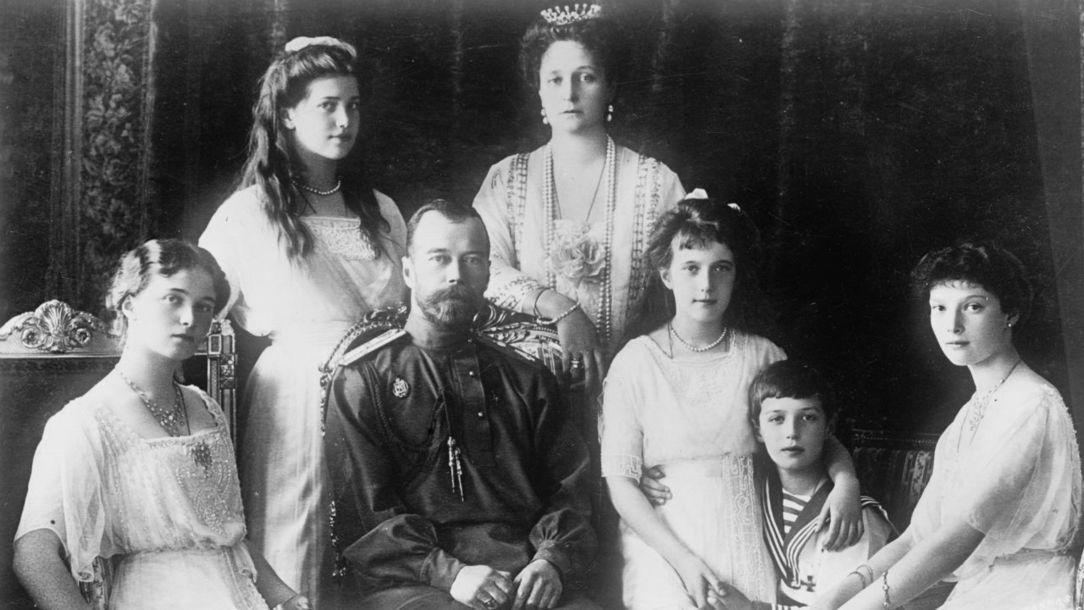 At the end of April 1918 they were moved once more this time to the Ipatiev House in Ekaterinburg soon to be known somewhat ominously as the House of Special Purpose. Here conditions remained harsh even though the man under whose care they now fell, Yakov Yurovsky did not seem entirely unsympathetic to their plight. He ordered the guards to behave with greater courtesy in their presence, returned goods that had previously been stolen from the family and provided the tsar with the cigarettes he so craved, even sometimes coffee. Not that he should be seen as anything than a dedicated Bolshevik who saw the entire Romanov Dynasty as little more than a criminal enterprise worthy of revolutionary justice.
With plans to rescue the Imperial Family thwarted and negotiations for their exile abroad stalled an atmosphere of despair prevailed at the Ipatiev House but one hope still remained; that the Civil War now underway might turn in their favour. The sound of friendly gunfire could be heard in the distance, the White Russian Armies were closing in. Something would have to be done and soon.
Pavel Medvedev was one of those guarding the Imperial Family when on 16 July he was summoned into Yurovsky’s presence. This is his account of the night’s events:
"In the evening between seven and eight pm, when the time of my duty had just begun; Commandant Yurovsky, ordered me to take all the Nagan revolvers from the guards and to bring them to him. I took twelve revolvers from the sentries as well as from some other of the guards and brought them to the commandant's office.
Yurovsky said to me, 'We must shoot them all tonight; so notify the guards not to be alarmed if they hear shots.' I understood, therefore, that Yurovsky had it in his mind to shoot the whole of the Tsar's family, as well as the doctor and the servants who lived with them, but I did not ask him where or by whom the decision had been made. At about ten o'clock in the evening in accordance with Yurovsky's order I informed the guards not to be alarmed if they should hear firing.
About midnight Yurovsky woke up the Tsar's family. I do not know if he told them the reason they had been awakened and where they were to be taken, but I positively affirm that it was Yurovsky who entered the room occupied by the Tsar's family. In about an hour the whole of the family, the doctor, the maid and the waiters had all got up and washed and dressed themselves.
Just before Yurovsky went to awaken the family, two members of the Extraordinary Commission [of the Ekaterinburg Soviet] arrived at Ipatiev's house. Shortly after one o'clock a.m., the Tsar, the Tsaritsa, their four daughters, the maid, the doctor, the cook and the waiters left their rooms. The Tsar carried the heir in his arms. The Emperor and the heir were dressed in soldiers' shirts and wore caps. The Empress, her daughters and the others followed him. Yurovsky, his assistant and the two above-mentioned members of the Extraordinary Commission accompanied them. I was also present.
During my presence none of the Tsar's family asked any questions. They did not weep or cry. Having descended the stairs to the first floor, we went out into the court and from there to the second door where we entered the ground floor of the house. When the room (which adjoins the store room with a sealed door) was reached, Yurovsky ordered chairs to be brought, and his assistant brought three chairs. One chair was given to the Emperor, one to the Empress, and the third to the heir.
The Empress sat by the wall by the window, near the black pillar of the arch. Behind her stood three of her daughters (I knew their faces very well, because I had seen them every day when they walked in the garden, but I didn't know their names). The heir and the Emperor sat side by side almost in the middle of the room. Doctor Botkin stood behind the heir. The maid, a very tall woman, stood at the left of the door leading to the store room; by her side stood one of the Tsar's daughters (the fourth). Two servants stood against the wall on the left from the entrance of the room.
The maid carried a pillow. The Tsar's daughters also brought small pillows with them. One pillow was put on the Empress's chair; another on the heir's chair. It seemed as if all of them guessed their fate, but not one of them uttered a single sound. At this moment eleven men entered the room: Yurovsky, his assistant, two members of the Extraordinary Commission, and seven Cheka Secret Policemen.
Yurovsky ordered me to leave, saying, 'Go on to the street, see if there is anybody there, and wait to see whether the shots have been heard.' I went out to the court, which was enclosed by a fence, but before I got to the street I heard the firing. I returned to the house immediately (only two or three minutes having elapsed) and upon entering the room where the execution had taken place, I saw that all the members of the Tsar's family were lying on the floor with many wounds in their bodies. The blood was running in streams. The doctor, the maid and two waiters had also been shot. When I entered the heir was still alive and moaned a little. Yurovsky went up and fired two or three more times at him. Then the heir was still."
:.
Tagged as: Fact File, Monarchy
Share this post: