Posted on 10th January 2021
Jehan de Wavrin, did not participate in the Battle of Agincourt but his father and brother who did were both killed in the fighting. Unaware of the family tragedy unfolding elsewhere on the battlefield he instead watched events from a safe distance. This is his account:
When the battalions of the French were thus formed, it was grand to see them; and as far as one could judge by the eye, they were in number fully six times as many as the English. And when this was done the French sat down by companies around their banners, waiting the approach of the English, and making their peace with one another; and then were laid aside many old aversions conceived long ago; some kissed and embraced each other, which it was affecting to witness; so that all quarrels and discords which they had had in time past were changed to great and perfect love. And there were some who breakfasted on what they had. And these Frenchmen remained thus till nine or ten o'clock in the morning, feeling quite assured that, considering their great force, the English could not escape them; however, there were at least some of the wisest who greatly feared a fight with them in open battle.
The French had arranged their battalions between two small thickets, one lying close to Agincourt, and the other to Tramecourt. The place was narrow, and very advantageous for the English, and, on the contrary, very ruinous for the French, for the said French had been all night on horseback, and it rained, and the pages, grooms, and others, in leading about the horses, had broken up the ground, which was so soft that the horses could with difficulty step out of the soil. And also the said French were so loaded with armour that they could not support themselves or move forward. In the first place they were armed with long coats of steel, reaching to the knees or lower, and very heavy, over the leg harness, and besides plate armour also most of them had hooded helmets; wherefore this weight of armour, with the softness of the wet ground, as has been said, kept them as if immovable, so that they could raise their dubs only with great difficulty, and with all these mischief there was this, that most of them were troubled with hunger and want of sleep.
Now let us return to the English. After the parley between the two armies was finished and the delegates had returned, each to their own people, the King of England, who had appointed a knight called Sir Thomas Erpingham to place his archers in front in two wings, trusted entirely to him, and Sir Thomas, to do his part, exhorted everyone to do well in the name of the King, begging them to fight vigorously against the French in order to secure and save their own lives. And thus the knight, who rode with two others only in front of the battalion, seeing that the hour was come, for all things were well arranged, threw up a baton which he held in his hand, saying 'Nestrocq' ('Now strike) which was the signal for attack; then dismounted and joined the King, who was also on foot in the midst of his men, with his banner before him.
Then the English, seeing this signal, began suddenly to march, uttering a very loud cry, which greatly surprised the French. And when the English saw that the French did not approach them, they marched dashingly towards them in very fine order, and again raised a loud cry as they stopped to take breath.
Then the English archers, who, as I have said, were in the wings, saw that they were near enough, and began to send their arrows on the French with great vigour.. 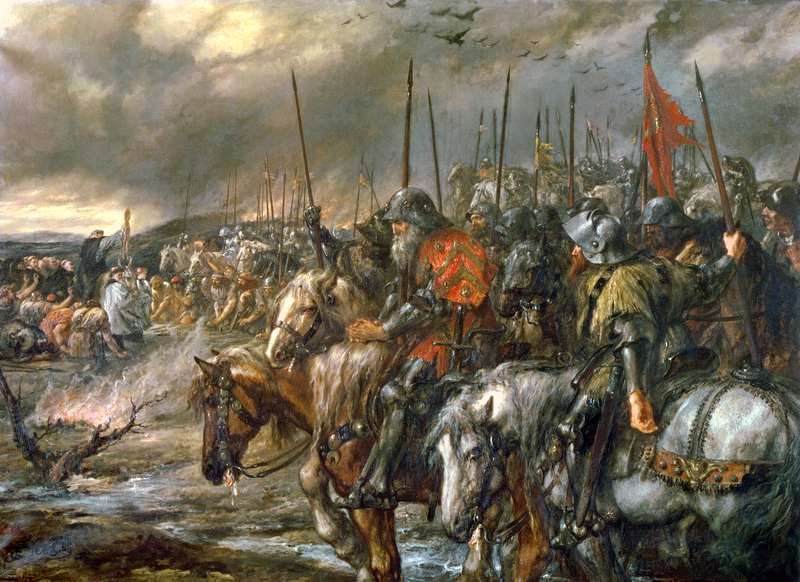 Then the French seeing the English come towards them in this manner, placed themselves together in order, everyone under his banner, their helmets on their heads. The Constable, the Marshal, the admirals, and the other princes earnestly exhorted their men to fight the English well and bravely; and when it came to the approach the trumpets and clarions resounded everywhere; but the French began to hold down their heads, especially those who had no bucklers, for the impetuosity of the English arrows, which fell so heavily that no one durst uncover or look up.
Thus they went forward a little, then made a little retreat, but before they could come to close quarters, many of the French were disabled and wounded by the arrows; and when they came quite up to the English, they were, as has been said, so closely pressed one against another that none of them could lift their arms to strike their enemies, except some that were in The French knights struck into these English archers, who had their stakes fixed in front of them, their horses stumbled among the stakes, and they were speedily slain by the archers, which was a great pity. And most of the rest, through fear, gave way and fell back into their vanguard, to whom they were a great hindrance; and they opened their ranks in several places, and made them fall back and lose their footing in some land newly sown; for their horses had been so wounded by the arrows that the men could no longer manage them.
The French men-at-arms without number began to fall; and their horses feeling the arrows coming upon them took to flight before the enemy, and following their example many of the French turned and fled. Soon afterwards the English archers, seeing the vanguard thus shaken, issued from behind their stockade, threw away their bows and quivers, then took their swords, hatchets, mallets, axes, falcon-beaks and other weapons, and, pushing into the places where they saw these breaches, struck down and killed these Frenchmen without mercy, and never ceased to kill till the said vanguard which had fought little or not at all was completely overwhelmed, and these went on striking right and left till they came upon the second battalion, which was behind the advance guard, and there the King personally threw himself into the fight with his men-at-arms..
"When the King of England perceived them coming thus he caused it to be published that every one that had a prisoner should immediately kill him, which those who had any were unwilling to do, for they expected to get great ransoms for them. But when the King was informed of this he appointed a gentleman with two hundred archers whom he commanded to go through the host and kill all the prisoners, whoever they might be. This esquire, without delay or objection, fulfilled the command of his sovereign lord, which was a most pitiable thing, for in cold blood all the nobility of France was beheaded and inhumanly cut to pieces, and all through this accursed company, a sorry set compared with the noble captive chivalry, who when they saw that the English were ready to receive them, all immediately turned and fled, each to save his own life.
Many of the cavalry escaped; but of those on foot there were many among the dead."
Tagged as: Ancient & Medieval, Fact File
Share this post: