Posted on 7th February 2021
In late February 1815, the former Emperor of France Napoleon Bonaparte escaped his exile on the island of Elba landing on the mainland near Cannes. Upon learning that the forces sent to intercept him had since joined his ranks King Louis XVIII took fright and fled Paris. He was perhaps right to do so for restored to the throne by Allied bayonets the Bourbons were deeply unpopular and the people were quick to rally behind their former Emperor who had once made them so proud.
By the summer he had reconstituted his army to something of its former glory and on 16 June he routed the Prussian Army at Ligny. Badly mauled he assumed they would retreat eastwards to protect their lines of communication and so now turned to confront the British Army commanded by the Duke of Wellington that had taken up a position near the village of Waterloo south of Brussels - as the two armies faced one another the fate of Europe lay in the balance.
These are the reminiscences of Captain Rees Howell Gronow of the Grenadier Guards who was present throughout on that fateful day.
"On the morning of the 18th the sun shone most gloriously, and so clear was the atmosphere that we could see the long, imposing lines of the enemy most distinctly. Immediately in front of the division to which I belonged, and, I should imagine, about half a mile from us, were posted cavalry and artillery; and to the right and left the French had already engaged us, attacking Huguemont and La Haye Sainte. We heard incessantly the measured boom of artillery, accompanied by the incessant rattling echoes of musketry.
The whole of the British infantry not actually engaged were at that time formed into squares; and as you looked along our lines, it seemed as if we formed a continuous wall of human beings. I recollect distinctly being able to see Bonaparte and his staff; and some of my brother officers using the glass, exclaimed, 'There he is on his white horse.'
I should not forget to state that when the enemy's artillery began to play on us, we had orders to lie down, when we could hear the shot and shell whistling around us, killing and wounding great numbers; then again we were ordered on our knees to receive cavalry. The French artillery - which consisted of three hundred guns, though we did not muster more than half that number we committed terrible havoc during the early part of the battle, whilst we were acting on the defensive. 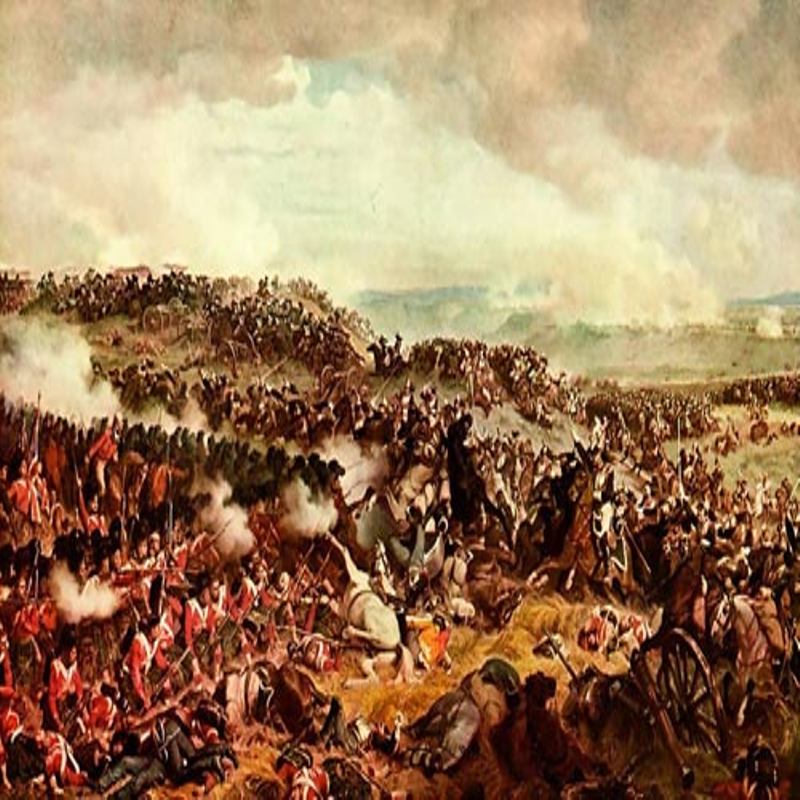 "About four P.M. the enemy's artillery in front of us ceased firing all of a sudden, and we saw large masses of cavalry advance: not a man present who survived could have forgotten in after-life the awful grandeur of that charge. You discovered at a distance what appeared to be an overwhelming, long moving line, which, ever advancing, glittered like a stormy wave of the sea when it catches the sunlight. On they came until they got near enough, whilst the very earth seemed to vibrate beneath the thundering tramp of the mounted host. One might suppose that nothing could have resisted the shock of this terrible moving mass. They were the famous cuirassiers, almost all old soldiers, who had distinguished themselves on most of the battlefields of Europe. In an almost incredibly short period they were within twenty yards of us, shouting 'Vive l'Empereur!' The word of command, 'Prepare to receive cavalry,' had been given, every man in the front ranks knelt, and a wall bristling with steel, held together by steady hands, presented itself to the infuriated cuirassiers.
I should observe that just before this charge the duke entered by one of the angles of the square, accompanied only by one aide-de-camp; all the rest of his staff being either killed or wounded. Our r commander-in-chief, as far as I could judge, appeared perfectly composed; but looked very thoughtful and pale.
The charge of the French cavalry was gallantly executed; but our well-directed fire brought men and horses down, and ere long the utmost confusion arose in their ranks. The officers were exceedingly brave, and by their gestures and fearless bearing did all in their power to encourage their men to form again and renew the attack. The duke sat unmoved, mounted on his favourite charger. I recollect his asking the Hon. Lieut.-Colonel Stanhope what o'clock it was, upon which Stanhope took out his watch, and said it was twenty minutes past four. The Duke replied,
d'The battle is mine; and if the Prussians arrive soon, there will be an end of the war.' " 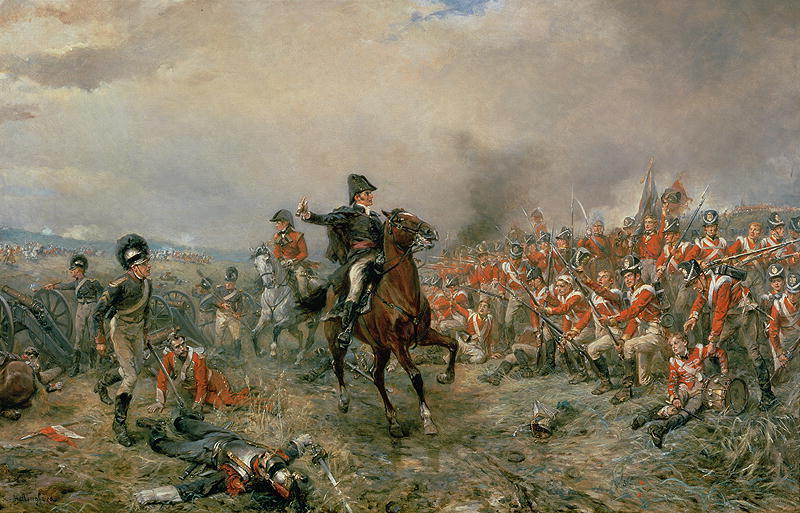 "It was about five o'clock on that memorable day that we suddenly received orders to retire behind an elevation in our rear. The enemy's artillery had come up en masse within a hundred yards of us. By the time they began to discharge their guns, however, we were lying down behind the rising ground, and protected by the ridge before referred to.
The enemy's cavalry was in the rear of their artillery, in order to be ready to protect it if attacked; but no attempt was made on our part to do so. After they had pounded away at us for about half an hour, they deployed, and up came the whole mass of the Imperial infantry of the Guard, led on by the Emperor in person. We had now before us probably about 20,000 of the best soldiers in France, the heroes of many memorable victories; we saw the bearskin caps rising higher and higher as they ascended the ridge of ground which separated us, and advanced nearer and nearer to our lines.
It was at this moment the Duke of Wellington gave his famous order for our bayonet charge, as he rode along the line: these are the precise words he made use of - 'Guards, get up and charge!' We were instantly on our legs, and after so many hours of inaction and irritation at maintaining a purely defensive attitude - all the time suffering the loss of comrades and friends - the spirit which animated officers and men may easily be imagined. After firing a volley as soon as the enemy were within shot, we rushed on with fixed bayonets, and that hearty hurrah peculiar to British soldiers."
Tagged as: Fact File, War
Share this post: