Posted on 1st August 2021
On 18 November 1558, as she sat beneath an oak tree in the grounds of Hatfield House where she was being detained under house arrest the 25 year old Princess Elizabeth was approached by several horsemen. Fearing they had come to return her to London to stand trial a clearly nervous Elizabeth declined to look up from the book she was reading but it was not in the harsh tones of the gaoler they greeted her but with deference and courtesy as they relayed the news that her sister Mary had died, and that by both inheritance and nomination she was now Queen of England.
Overwhelmed with relief Elizabeth responded in Latin, “This is the Lord’s doing, and it is marvellous in our eyes.” 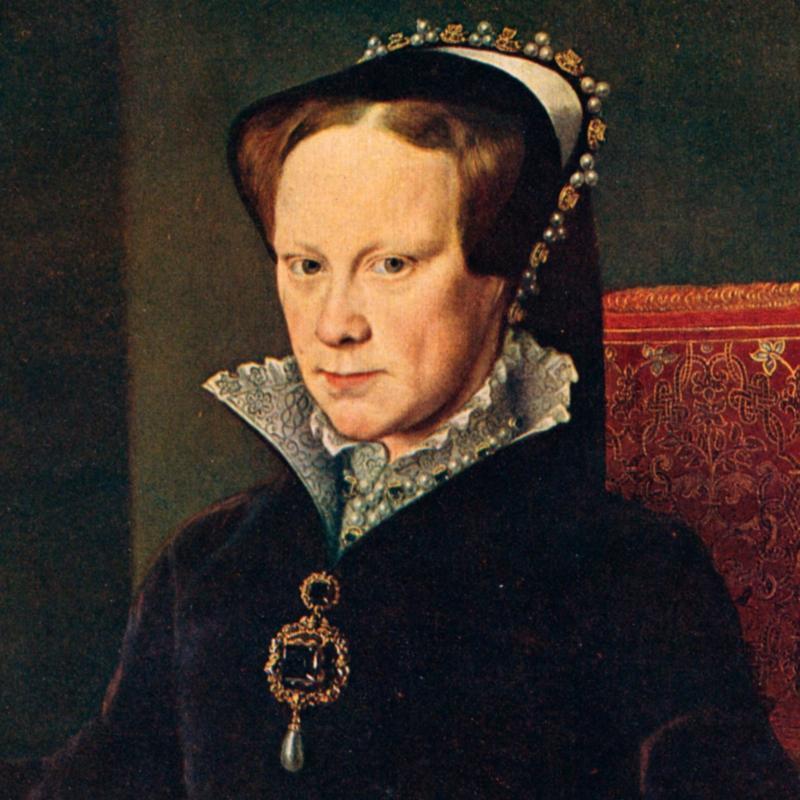 Her sister Mary’s reign had been a short and troubled one, a devout Catholic few had doubted that provided the opportunity she would reverse the religious reforms that had resulted in the break with Rome twenty years earlier. Indeed, so concerned was her brother Edward VI that despite being ill and near death he moved to deny her the succession by changing the law to permit his soundly Protestant cousin Lady Jane Grey to inherit the throne. But no amount of legalese could disguise the fact that as the brother of the deceased King and daughter of Henry VIII, Mary was the rightful heir.
Lacking legitimacy and support the unfortunate Lady Jane reigned just 9 days before being easily deposed by Mary who entered London to great popular acclaim.
Lady Jane, who declared that she had never wanted to be Queen and had since sworn allegiance to her cousin was beheaded on Mary’s orders despite having earlier been promised clemency. The execution of the 19 year old Lady Jane who was seen by all as an innocent in the dynastic power games of guilty men was not well received and was the first indication that this was to be an ill-starred and unhappy reign.
Although many people still held to the Old Faith Mary’s attempt to re-impose Catholicism on England was seen as brutal and vindictive in its implementation leading to the burning at the stake of not just such prominent people as Archbishop Thomas Cranmer, Bishop Nicholas Ridley and Bishop Hugh Latimer but also many common people whose only crime had been to procure a copy of the Bible and read it for themselves.
The Marian Burnings did Mary’s reputation untold harm as also did her marriage to Philip of Spain. Despite the legalities of the marriage which stipulated that Philip could never be King in his own right the fear that auto-da-fe was about to return to England would result in rebellion. any children he and Mary might have would inherit the throne and the fear that auto-da-fe would come to the cities and parishes of England was very real and was to result in rebellion. Disorganised and poorly led by Sir Thomas Wyatt it was easily crushed but despite the fact it never posed a serious threat to Mary’s reign she believed it had and seeing traitors close to home she suspected her sister of involvement. 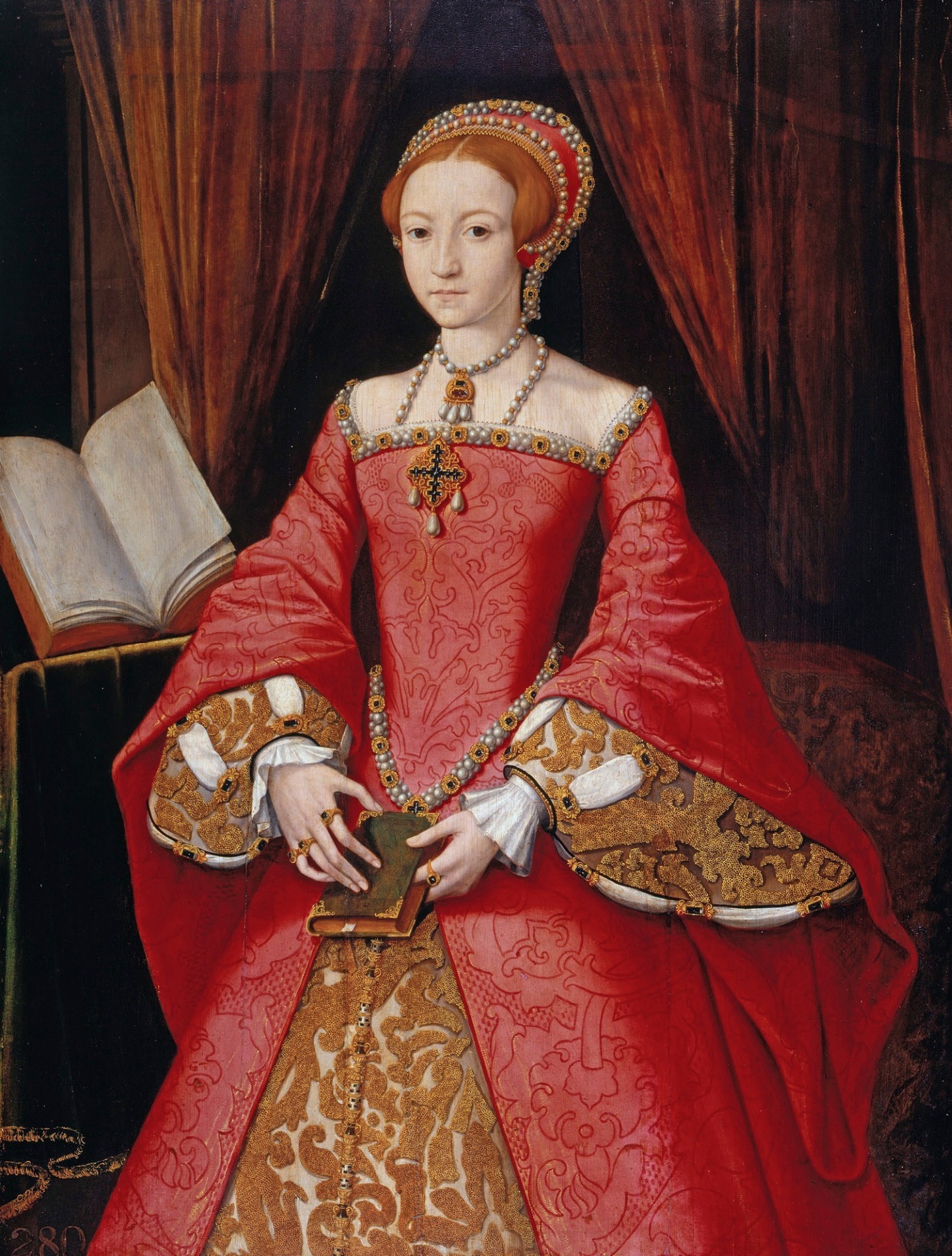 Elizabeth had been shrewd enough to disassociate herself from Wyatt’s rebellion but there was little doubt in the minds of Mary and her Advisors that it was in her name the rebellion had occurred.
On 18 March, she was arrested and taken to the Tower of London where holding back the tears and trying not to show fear she entered her place of confinement through the same Traitor’s Gate her mother Anne Boleyn had passed twenty years earlier.
She knew the fate that might await her but would defend herself with all the weapons at her disposal – her wit, her intelligence, her use of language, her pleas of innocence and her powers of presentation which as would later emerge had few peers.
Interrogated by Mary’s Lord Chancellor the bitter and hostile Archbishop Stephen Gardner, Elizabeth refused to be intimidated combining apparent supplication with high-minded aggression regularly repeating that she was the legitimate daughter of Henry VIII, England’s greatest King, and that she should not be so spoken to by any other than her Queen and sister.
Her superior manner and deliberate obfuscation only inflamed further the ire of an increasingly bemused and frustrated Bishop Gardiner who was to recommend to Mary that her half-sister Elizabeth should be charged with treason and put on trial for her life because as long as she lived the Queen could never be secure on her throne.
Mary hesitated to kill her own flesh and blood for the time being at least, but in a private audience with Elizabeth that was often tense and heated demanded that she convert to Catholicism. Elizabeth refused but swore repeatedly both her allegiance and her loyalty. Others on Mary’s Council more sympathetic to Elizabeth’s predicament also spoke in her defence.
It was hardly a secret that Elizabeth opposed Mary’s religious policies and so she was ordered to attend Catholic Mass - Elizabeth agreed but would more often than not feign illness to avoid doing so. Her recalcitrance did little to improve relations between the sisters.
On 22 May, Elizabeth was moved from the Tower of London to a country house near Woodstock. She had been reprieved but she knew her sister well enough to realise her mood could change in an instant and that she could be ruthless, hadn’t her behaviour towards Lady Jane Grey and her continuing persecution of Protestants proved that - the Name ‘Bloody Mary’ was not unwarranted.
The rousing reception Elizabeth received as she journeyed through the streets of London to her place of house arrest filled her less with joy than it did foreboding; exiled from the Royal Court she anxiously awaited the ‘fateful day’ she felt sure would come.
When Mary died on 17 November 1558, few outside her inner-circle and co-religionists mourned her passing. She had been reduced to burning at the stake to impose her will (no Catholic had shared a similar fate during the reign of her just as committed Protestant brother, Edward VI) and for many on her Council she had displayed all the perceived weaknesses of womankind – irrational in her decision making, emotional at times of crisis, a propensity to tears, hysterical in her desperation to give birth and stubborn beyond reason.
Now there would be another woman on the throne.
Having lived under the threat of death throughout most of Mary’s reign it was not without reason that Elizabeth had breathed such a huge sigh of relief upon learning of her sister’s passing and though she never doubted her own right to be Queen as the daughter of that Goggled-Eyed Whore Anne Boleyn she remained uncertain as to her reception
.
Leaving nothing to chance Elizabeth consulted the noted mathematician and astronomer, some might say magician John Dee as to the most auspicious date for her Coronation. Having drawn up a detailed astrological chart he concluded that the most favourable alignment of the planets would occur on the fifteenth of January. Given that any further delay would provide the opportunity for potential pretenders to the throne to emerge it was a date on the outer limits of the time allotted.
Elizabeth need not have been so worried for after five torrid years under Mary during which she had squandered the goodwill of her people there was a sense of palpable relief at her demise. But it would not be a Coronation without controversy.
No leading cleric neither Protestant nor Catholic was willing to conduct the service as under canon law Elizabeth was deemed illegitimate. With none of the Archbishops of Canterbury, York, or London willing to participate the anointing of the new Queen would be the responsibility of Owen Oglethorpe, the obscure and curmudgeonly Catholic Bishop of Carlisle.
The fifteenth of January was a cold and bright day and the people of London had turned out in their tens of thousands to catch a glimpse of their new Queen, and Elizabeth was not to disappoint with many of the character traits that were to become so familiar during her reign on display for the first time and none more so than her ability to manipulate an occasion and seduce a crowd. 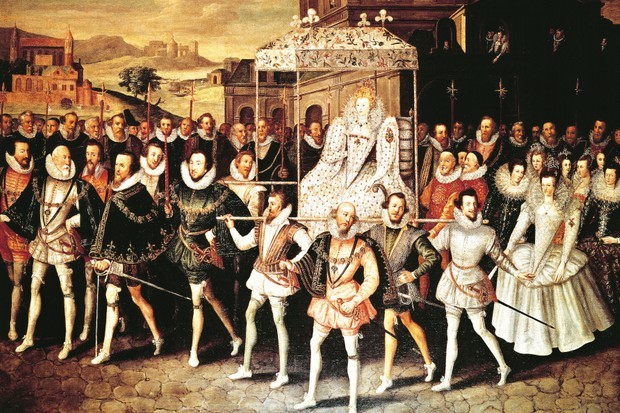 Surprised at the adulation she received she quickly warmed to the occasion behaving in a manner unprecedented as ignoring the tight security she walked among a people who had never been so close to their Monarch before exchanging remarks, cracking jokes, and thanking them for their goodwill towards her. She simply being adored and her procession to Westminster Abbey was a triumph, a finely tuned symphony of praise and love played out as if she were conducting her own orchestra.
But her love of display diminished not a jot her inherent frugality as the crimson robes she wore on her procession through the streets of London were the same as those worn by her sister five years before, altered to fit her slimmer figure but cheaper than commissioning a new dress. After all, why spend money unnecessarily.
Nervous on the night before the Coronation, Elizabeth was now in her element and the series of pageants along the procession route that were performed in honour of the new Monarch telling the story of her lineage, history and of her right to rule and were considered by many an unnecessary inconvenience with their seemingly endless symbolic gestures of allegiance and spoken supplications were a joy to her, and she was seen to smile throughout.
The Coronation itself was a more solemn affair, however.
Bishop Oglethorpe was not a man to bring light to an occasion and certainly not when communion with God was uppermost in his mind. Elizabeth had objected to his appointment feeling as she did uncomfortable in his presence. 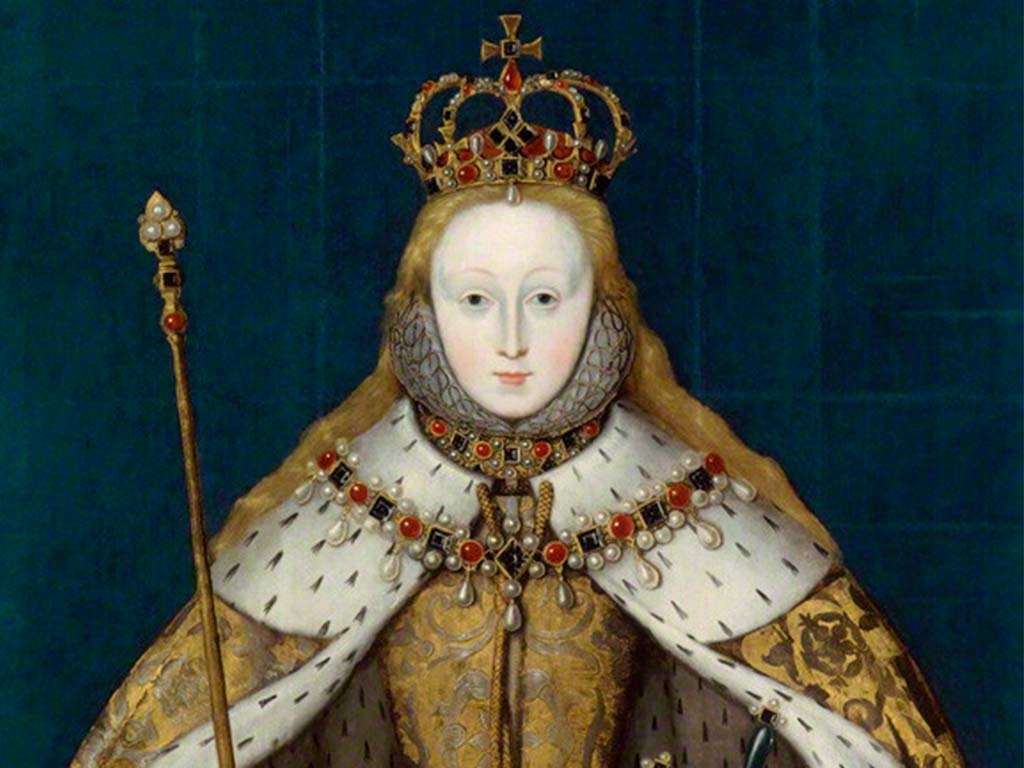 Elizabeth had changed for the Coronation service into an all gold robe, dress and shoes and in a break with tradition she wore her hair long and loose as a symbol of her virginity for this was not just the crowning of a new Queen but the marriage of her to England and its people.
Carrying an orb in one hand and a sceptre in the other she sat upon the throne as Bishop Oglethorpe called upon those present to voice their approval of their new Queen which they did enthusiastically before the Lords spiritual and temporal lined up to kneel before her and pay homage. Elizabeth then knelt herself for the reading of the Lord’s Prayer before the sermon was read and hymns sung. She was then crowned three times as the ruler of England, France, and Ireland but the ceremony did not proceed entirely as planned.
Elizabeth had demanded that Bishop Oglethorpe not elevate the host indicating the corporeal presence of Christ as this ran contrary to her strongly held Protestant beliefs. When he did so in flagrant disregard of her instructions she stormed huffily from the hall becoming the only English Monarch to walk out on their own Coronation.
The obstreperous old Oglethorpe was later removed from his Bishopric.
Normal service was soon resumed as Elizabeth changed once more this time into Imperial purple for the short procession to Westminster Hall and the Coronation Banquet where she danced long into the night with her favourite, Robert Dudley.
It had been just as John Dee had predicted – an auspicious day – and was the beginning of one of the most remarkable reigns in all English history as Queen Elizabeth I proceeded to confound all the misconceptions that governed women’s lives. She could rule as well as any man without ever wishing to be one or to behave like one - her femininity was her strength, singular and without apology.
Her father would have been proud.
Tagged as: Monarchy, Tudor & Stuart
Share this post: