Posted on 21st February 2021
Of all the horrors of the Great War the trenches, the barbed wire, the relentless shelling and the rat-a-tat-tat of the machine gun none was more terrible or more feared than poison gas. It was the silent killer that floated in the air and descended without warning and those who died of its effects did so slowly and in great pain.
The Hague Convention of 1899 had banned the use in warfare of projectiles containing poisonous gases. The key word in the treaty however was – projectile. Most of the poison gas used in the Great War was released from cylinders placed not too far in front of the perpetrators own front-line. So its use was not technically breaking the terms of the Convention. 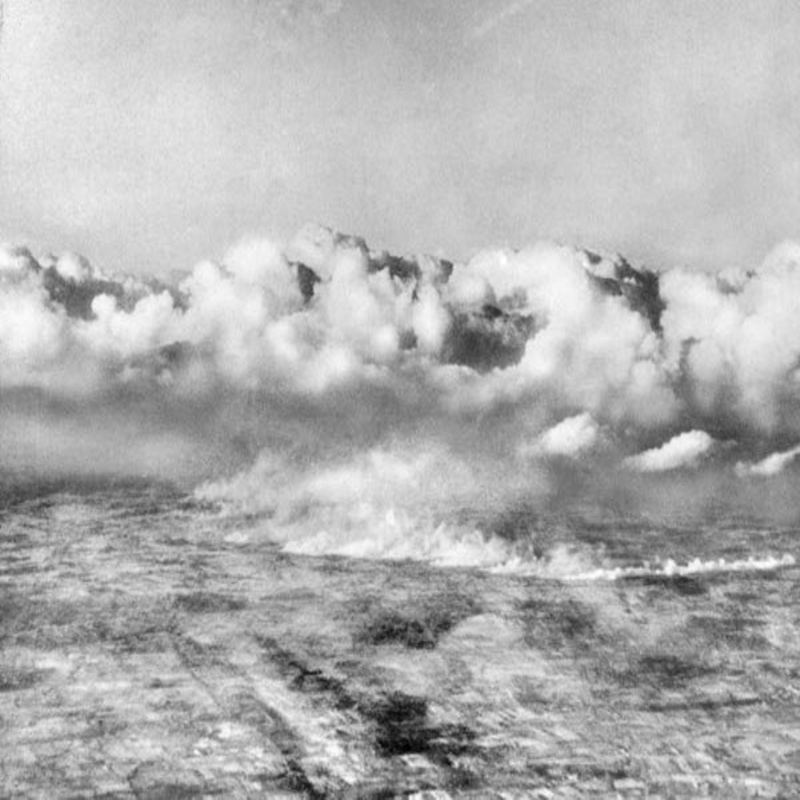 Contrary to popular belief gas was not first used by the Germans but by the French at Neuve Chapelle in October 1914, though the gas used was of a non-lethal kind and designed only to cause irritation, discomfort and coughing fits of such violence that the enemy would be forced to abandon its positions. Unsurprisingly, it met with little success.
The Germans were the first to take gas seriously as a weapon that might tip the scales of the conflict in their favour and so on 31 January 1915, at Borimov near Warsaw on the Eastern Front 18,000 shells containing liquid bromide xylyl, a crude form of tear gas, were fired at the Russian lines but the freezing temperatures rendered them largely ineffective. The Germans remained undeterred, however.
The Race to the Sea on the Western Front had ended in an unbroken line of trenches that stretched from the Swiss Alps to the Atlantic Coast and hundreds of thousands of men had already lost their lives trying to break the deadlock as a result. How to crack the labyrinthine defences of the enemy other than by sheer force perplexed everyone but the Germans believed that a more lethal form of poison gas might justki hold the key.
In co-operation with the company I.G Farben which produced chlorine as a by-product of its dye making process, and along with the scientist Fritz Haber (known as the father of chemical warfare and who was to win the Nobel Prize for chemistry in 1918) they worked hard to create a gas that would be deadly upon first contact. They worked fast and by 22 April 1915 the German Army had already stockpiled 168 tons of chlorine in 5,730 cylinders at Langemark-Poelkapelle near Ypres in Belgium. At 5 pm that evening with the breeze blowing towards the Allied trenches the gas was released. 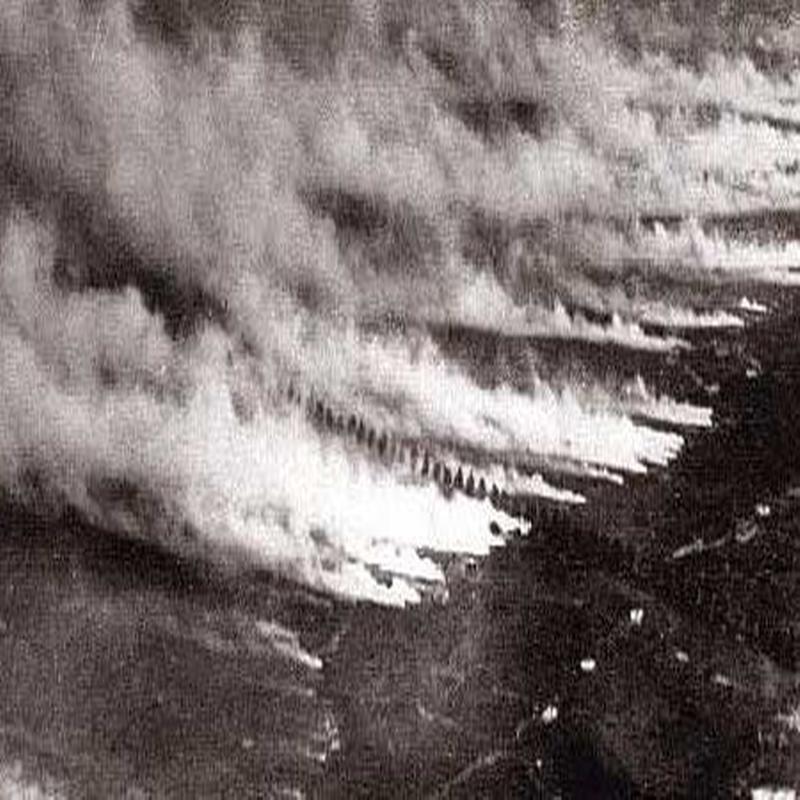 A low-lying grey-green cloud could be seen drifting slowly across no-man’s-land towards a line of trenches held by French Colonial troops from Martinique. Few of the soldiers paid much attention to the cloud slowly moving in their direction. The trenches were already shrouded in mist and most thought it was just a trick of the light as such they were unaware of what was happening to them as their throats became hot, the thick foam congealing in their lungs began to dribble from their mouths and the sight began to be burned from their eyes. Panic ensued as they discarded their weapons and began to flee the trenches and within minutes a gap almost a mile long had appeared in the Allied lines. Their Officers tried to rally the fleeing troops but to no avail and British soldiers in nearby trenches that had been unaffected by the gas were ordered to fire upon them, but it had little effect.
The situation could have been serious but the Germans had made no plans for an assault. The poison gas attack had just been a test and the element of surprise had been lost.
The Allies were quick to make the most of the German use of poison gas for propaganda purposes. It being yet another example of the Beastly Hun’s barbarity but they were just as quick to use it themselves and the British Army was soon to have 1,400 Gas Companies, though they never referred to it as gas but as an accessory. 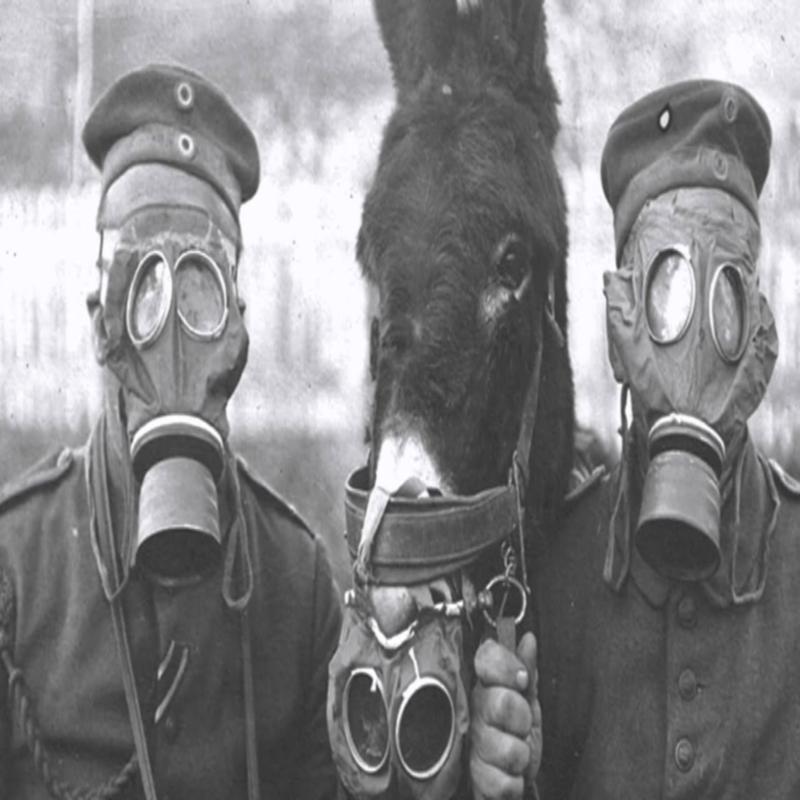 Gas could only be effective however if the wind was blowing in the right direction at the time of its use it was not unknown for the wind to change direction after the gas cylinders had been released. For example, the British used gas at the Battle of Loos in September, 1915 when the direction of the wind suddenly changed blowing the gas into the faces of the advancing troops causing more than 2,000 casualties.
The chemical compound of the gases used also changed repeatedly; the Germans used phosgene and mustard gas with phosgene being particularly terrifying as its impact would only be felt 48 hours after it had been inhaled by which time it was so embedded in the lungs it could not be eradicated. Mustard gas, first used against the Russians at Riga in 1917, burned from the inside out causing blisters to appear on the lungs and on the skin. It also permanently blinded many of its victims.
At first there was little answer to a gas attack and soldiers were simply advised to hold a urine soaked handkerchief to their mouth and nose which given the need for haste and the difficulty of producing one’s own when required would see a rush for the latrines.
Later the British Army distributed 100,000 wads of cotton wool that were to be dipped in a solution of bicarbonate of soda at the first sign of a gas attack and held over the face.
In time, the soldiers of all sides, except the Russians, were provided with gas masks that had filter respirators that used charcoal and various other chemicals to act as an antidote.
The ringing of a bell would warn of incoming gas and pandemonium would invariably ensue as soldiers with often less than twenty seconds to do so desperately sought, to retrieve their gas masks. Even a single breath of the toxic fumes could prove fatal and many men were to fall victim to it by incorrectly fitting the mask in their haste.
The sense of panic was increased by the trench being plunged into-semi-darkness and the knowledge that a gas attack would soon be followed by an infantry assault and men knocked each other to the ground as they scrambled to man the firing steps. 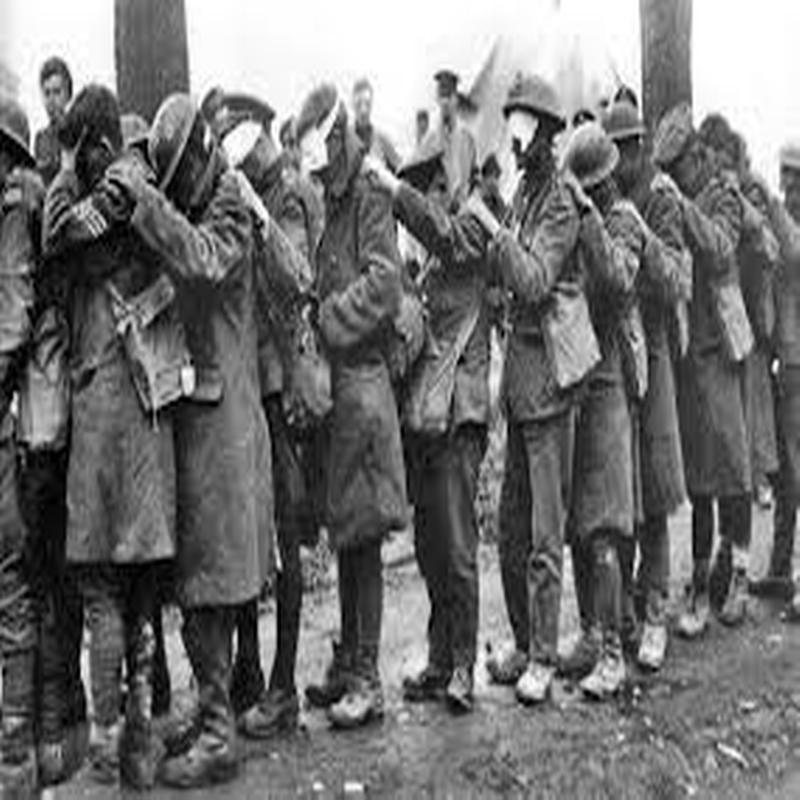 Despite the terror it induced in those subject to it gas was never as an effective weapon of war as had been hoped.
By the end of the conflict British and Commonwealth Forces had suffered 188,000 gas casualties of whom, 8,100 had died as a result. The French also suffered 8,000 killed and the Germans around 15,000. The Russians suffered worse than anyone, they had no effective gas masks and more than 56,000 were killed.
Of the 1,250,000 recorded victims of gas attacks some 91,000 were killed less than 10% of the total. Many were blinded of course while others suffered from lung disease and died prematurely of the consequences but gas was always more effective as a weapon of terror than a decisive battlefield armament.
Following the end of the First World War their use of poison gas was conveniently forgotten by the Allies but used to further demonise an already defeated enemy. Its use in warfare was again banned in 1925, but by the time of the Second World War all of the major military powers held vast stockpiles of chemical weapons. They were never used, though Mussolini did allow poison gas to be dropped from the air during the invasion of Abyssinia in 1935, something which was kept secret from Italian people..
Tagged as: Modern, War
Share this post: