Posted on 15th February 2021
The H.L Hunley was not strictly the first submarine ever designed or built but it was the first to see active service and the first to sink another naval vessel in combat. It was named after its primary designer Horace Lawson Hunley who developed it in association with James McLintock and Baxter Watson, though it was Hunley who was to remain hands-on throughout its development and testing.
By 1863, the Confederacy was being squeezed by the Union blockade of its and ports and coastline and so without a Navy that could challenge Northern supremacy of the seas directly other means had to be found. 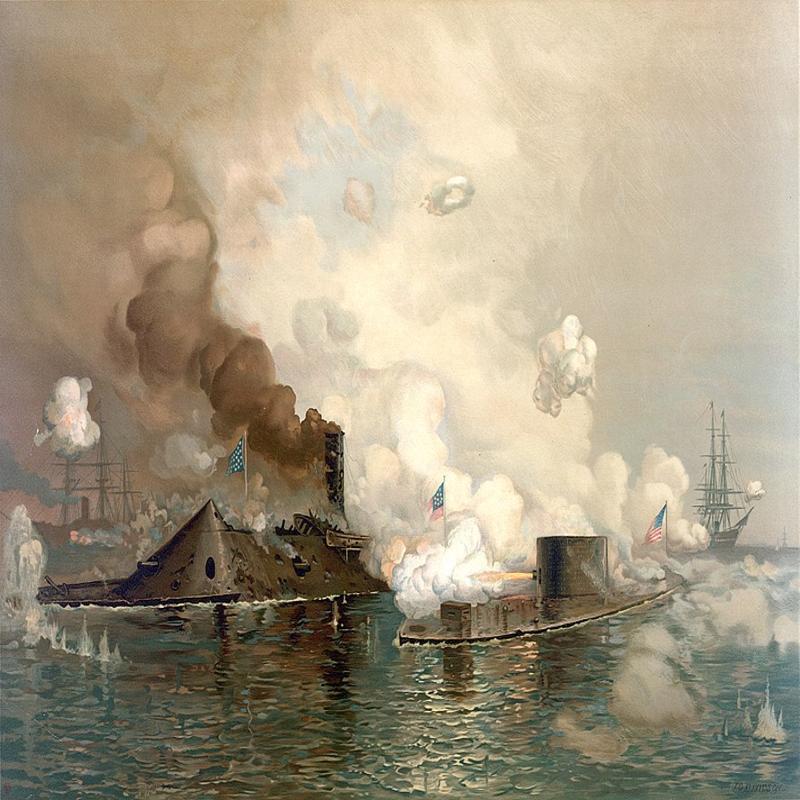 On 8 March, the C.S.S Virginia, formerly the U.S.S Merrimac which had been converted into the world’s first Ironclad sailed into Hampton Roads Harbor and attacked the Northern Fleet moored there. With their guns unable to penetrate the Virginia’s armour the wooden ships of the U.S Navy were no match and in short order the U.S.S Cumberland was rammed and sank with great loss of life, the U.S.S Congress blew up while the badly damaged U.S.S Minnesota forced to run aground had to be abandoned. With darkness descending the Virginia retired for the night expecting to finish off the Union fleet the following day but the next morning the crew of the Virginia were shocked to find their way blocked by the arrival of the Union Ironclad the Monitor. These two strange looking warships now battered away at each other for three hours with neither making much impact on the other before both withdrew.
The clash of the Ironclads at Hampton Roads may have changed the face of naval warfare forever but it had not broken the northern blockade and the Union production of such vessels would soon surpass anything the South could contend with - the technology had simply come too late. So the search went on and the South was to use mines, torpedoes and sabotage in their increasingly desperate attempts to break the Northern blockade but though they were to sink a great many Union ships the breakthrough just wouldn’t come.
Pressure was growing on H L Hunley to complete his design particularly as the two previous prototypes of his submarine had sunk.
On 12 August 1863, the Hunley arrived by rail in Charleston, South Carolina. It was to be commanded by Lieutenant John Payne and manned by seven volunteers. It needed to be rushed into service and so the sea trials were to take place immediately - they did not go well.
On 29 August, Lieutenant Payne ordered the submarine to submerge when its hatches were still open causing it to sink. Payne and two others managed to escape but five crewmen were drowned. With work still to be done Hunley cancelled the sea trials for the time being and it wasn’t until October 15, that the Hunley again went to sea. Believing the vessel was close to ready for active service its designer accompanied it on its sea trial to carry out some final checks but after submerging it failed to resurface. The Confederates managed to salvage the vessel but all aboard had drowned including its designer.
The Hunley was had a crew of eight with seven to turn the hand-cranked propellers and one, the Captain, to guide the vessel. It had two watertight hatches but both were very narrow hampering any attempt to speedily abandon ship while the space inside was so restrictive it was impossible to stand up or move about freely. At each end of the vessel were ballast tanks which could be flooded using valves and emptied using pumps. Extra ballast and greater buoyancy were provided by the application and removal of lead weights. It was armed with a spar torpedo attached to the front of the craft which would then be rammed into the vessel it was attacking. The Hunley would then detach itself and submerge with the torpedo exploding as it moved away.
Following the death of the submarines designer Horace Hunley, the Military Commander of Charleston, General Beauregard took it upon himself to declare the salvaged vessel fit for service and ordered its new Skipper, Lieutenant George E Dixon to make preparation for combat.
Charleston had been besieged and under blockade for more than two years and Beauregard was desperate to break the stranglehold. The Hunley provided their best and possibly only hope. 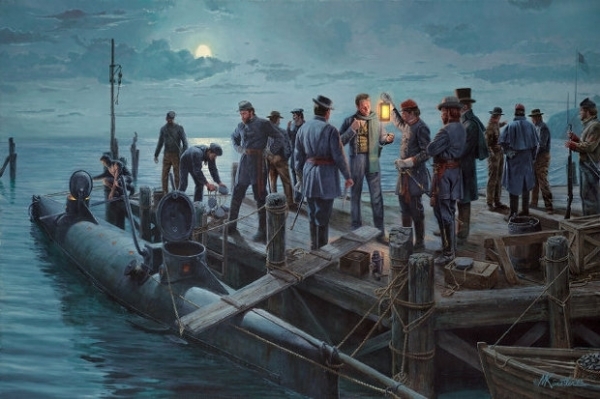 On the night of 17 February, 1864, under the cover of darkness and in great secrecy the H.L Hunley set off from Charleston docks her target the U.S.S Housotonic five miles out to sea and blocking the entrance to the Harbour.
As far as most people were aware there was little going on and it was just another cold, still, South Carolina night when the dark moonless sky was suddenly lit up by the fire of a huge explosion, the Housotonic had been set ablaze and was sinking fast taking five of her crew with her. It appeared that the Hunley’s attack had been a total success.
The Hunley had since surfaced and lit her lantern to indicate that she was returning to port. The lantern could still be seen more than an hour later so what happened next still remains a mystery. It is possible that Lieutenant Dixon felt he needed to submerge again to make it back home undetected. What is known is that the Hunley never made it.
On 8 August 2000, the Hunley was raised from the bottom of Charleston Harbour. The bodies of the crew were found to be still at their posts and there were no signs that there had been a rush for the hatches indicating that they had not drowned. It would appear that they had suffocated or been overcome by fumes possibly as a result of a miscalculation by Lieutenant Dixon. The crew of the Hunley were interred with full military honours on 17 April, 2004.
Neither Charleston nor the South ever broke the Union blockade but the C.S.S Hunley had the rules of naval engagement. War at sea would never be the same again.
Tagged as: Miscellaneous, War
Share this post: