Hamilton and Burr: The Duel

Posted on 11th February 2021
Alexander Hamilton and Aaron Burr were once able to make good in a common cause but those days were long past and by 1804 they had become bitter political rivals.
As the United States first Secretary of the Treasury and a major contributor to the Federalist Papers which outlined at length the form the new Republic should take Alexander Hamilton has his place in history. Aaron Burr was Thomas Jefferson’s Vice-President and is most remembered now for killing Alexander Hamilton.
With a Presidential Election on the horizon Burr was keen to keep his place as Jefferson’s running mate and so was furious when a letter was published from an acquaintance of Hamilton’s which suggested that he had made disparaging remarks regarding Burr’s fitness for high office. He demanded a retraction and an apology from Hamilton. When he refused on the grounds that he could not be held responsible for another man’s interpretation of what he may or may not have said, Burr in a state of high dudgeon challenged him to a duel. Despite the fact that duelling was illegal and the penalties for doing so often harsh a combination of honour and hatred saw Hamilton unable to decline. 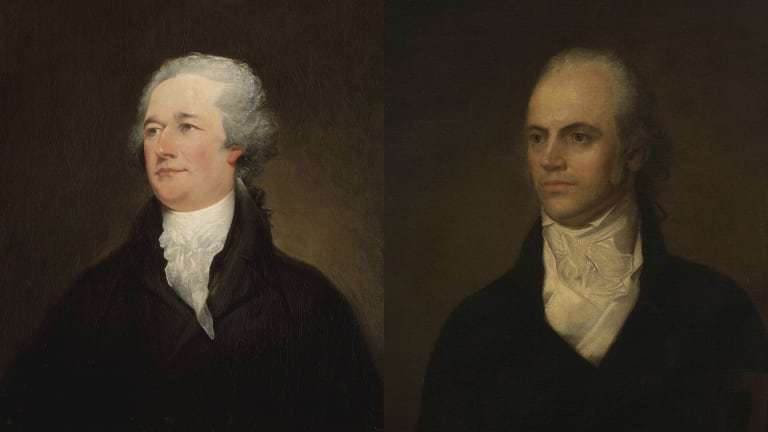 The two men faced one another early on the morning of 11 July, 1804, in woods near Weehawken, New Jersey, their weapon of choice the pistol.
Hamilton, who may have been aiming deliberately wide of Burr did not receive the same generosity of spirit in return and was shot through just above the hip. The wound proved mortal and he died the following day.
Burr was charged with murder and fled south - it seems honour doesn’t extend to taking responsibility for one’s actions. In the event his case never came to trial but he was removed as the Vice-Presidential candidate and proved incapable of reviving his political career.
Hamilton’s second Nathaniel Pendleton and Burr’s second William van Ness along with the physician David Hasock who was also present would later come together to publish their account of events:
"Colonel Burr arrived first on the ground, as had been previously agreed. When General Hamilton arrived, the parties exchanged salutations, and the seconds proceeded to make their arrangements. They measured the distance, ten full paces, and cast lots for the choice of position, as also to determine by whom the word should be given, both of which fell to the second of General Hamilton. They then proceeded to load the pistols in each other's presence, after which the parties took their stations. The gentleman who was to give the word then explained to the parties the rules which were to govern them in firing, which were as follows: The parties being placed at their stations, the second who gives the word shall ask them whether they are ready; being answered in the affirmative, he say shall say – present! After this the parties shall present and fire when they please. If one fires before the other, the opposite second shall say one, two, three, fire, and he shall then fire or lose his fire. 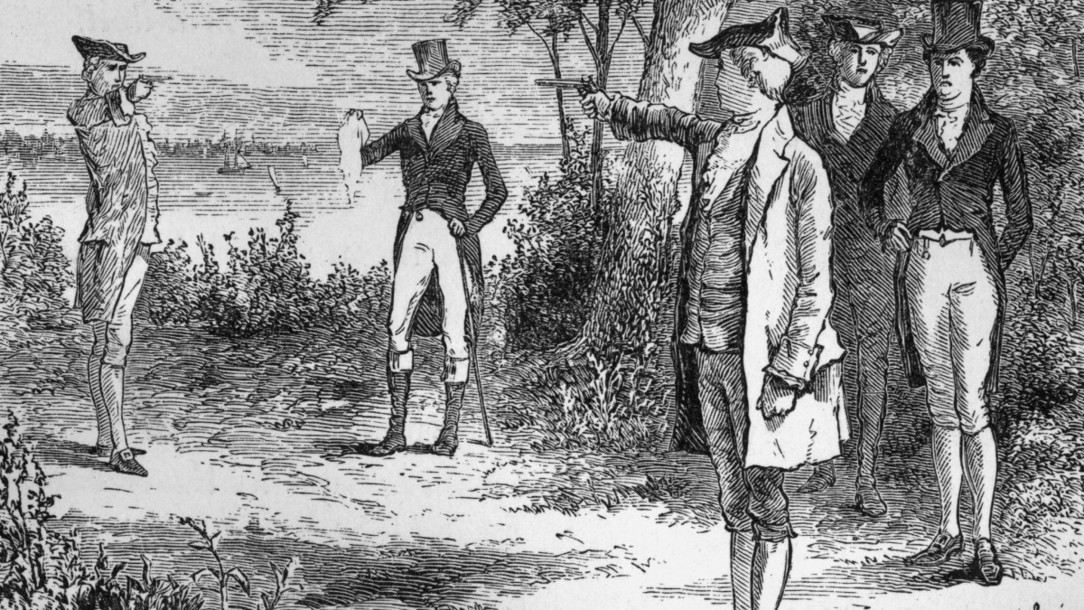 He then asked if they were prepared; being answered in the affirmative, he gave the word present, as had been agreed on, and both parties presented and fired in succession. The intervening time is not expressed, as the seconds do not precisely agree on that point. The fire of Colonel Burr took effect, and General Hamilton almost instantly fell. Colonel Burr advanced toward General Hamilton with a manner and gesture that appeared to General Hamilton's friend to be expressive of regret; but, without speaking, turned about and withdrew, being urged from the field by his friend, as has been subsequently stated, with a view to prevent his being recognized by the surgeon and bargemen who were then approaching. No further communication took place between the principals, and the barge that carried Colonel Burr immediately returned to the city. We conceive it proper to add, that the conduct of the parties in this interview was perfectly proper, as suited the occasion."
Dr Hosack now rushed to the prostrate Hamilton’s side:
When called to him upon his receiving the fatal wound, I found him half sitting on the ground, supported in the arms of Mr Pendleton. His countenance of deat I shall never forget. He had at that instant just strength to say, 'This is a mortal wound, doctor;' when he sunk away, and became to all appearance lifeless. I immediately stripped up his clothes, and soon, alas I ascertained that the direction of the ball must have been through some vital part. His pulses were not to be felt, his respiration was entirely suspended, and, upon laying my hand on his heart and perceiving no motion there, I considered him as irrecoverably gone. I, however, observed to Mr. Pendleton, that the only chance for his reviving was immediately to get him upon the water. We therefore lifted him up, and carried him out of the wood to the margin of the bank, where the bargemen aided us in conveying him into the boat, which immediately put off. During all this time I could not discover the least symptom of returning life. I now rubbed his face, lips, and temples with spirits of hartshorn, applied it to his neck and breast, and to the wrists and palms of his hands, and endeavoured to pour some into his mouth.
When we had got, as I should judge, about fifty yards from the shore, some imperfect efforts to breathe were for the first time manifest; in a few minutes he sighed, and became sensible to the impression of the hartshorn or the fresh air of the water. He breathed; his eyes, hardly opened, wandered, without fixing upon any object; to our great joy, he at length spoke. 'My vision is indistinct,' were his first words. His pulse became more perceptible, his respiration more regular, his sight returned. I then examined the wound to know if there was any dangerous discharge of blood; upon slightly pressing his side it gave him pain, on which I desisted.
Soon after recovering his sight, he happened to cast his eye upon the case of pistols, and observing the one that he had had in his hand lying on the outside, he said, "Take care of that pistol; it is un-discharged, and still cocked; it may go off and do harm. Pendleton knows " (attempting to turn his head towards him) 'that I did not intend to fire at him.' 'Yes,' said Mr. Pendleton, understanding his wish, 'I have already made Dr. Hosack acquainted with your determination as to that' He then closed his eyes and remained calm, without any disposition to speak; nor did he say much afterward, except in reply to my questions. He asked me once or twice how I found his pulse; and he informed me that his lower extremities had lost all feeling, manifesting to me that he entertained no hopes that he should long survive."
Tagged as: Fact File
Share this post: