Posted on 28th April 2021
At 9 am on 3 September 1939, as agreed by prior arrangement the translator Paul Schmidt met with the British Ambassador alone in Joachim von Ribbentrop’s office at the Foreign Ministry in Berlin where he received Prime Minister Neville Chamberlain’s ultimatum that if German hostilities in Poland did not cease by 11 am then a State of War would exist between Great Britain and Germany.
A local but bloody disagreement was about to become a European wide conflict. Both parties expressed their regret before Schmidt departed for the Reich Chancellery where he translated the document for Adolf Hitler. He later described the scene: 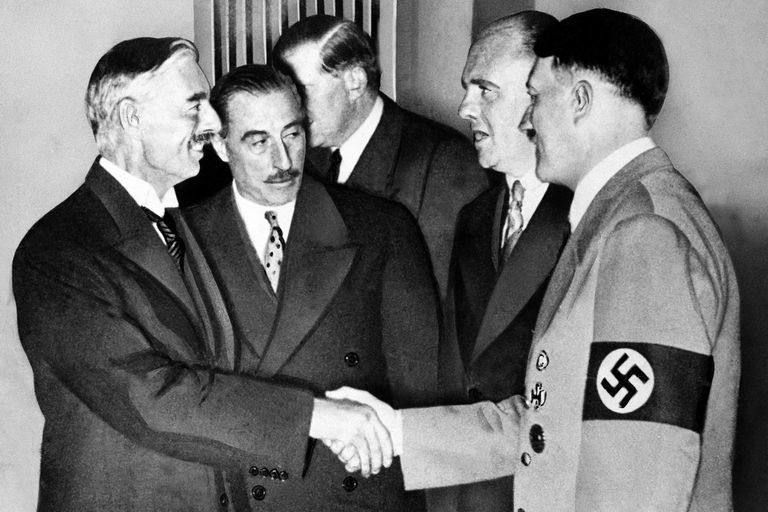 When I entered the room Hitler was sitting at his desk and Ribbentrop stood by the window. Both looked up expectantly as I came in. I stopped at some distance from Hitler’s desk, and then slowly translated the British Government’s ultimatum. When I finished, there was complete silence.
Hitler sat immobile, gazing before him. He was not at a loss, as was afterwards stated, nor did he rage as others allege. He sat completely silent and unmoving. After an interval which seemed an age, he turned to Ribbentrop, who had remained standing by the window. ‘What now?’ asked Hitler with a savage look, as though implying that his Foreign Minister had misled him about England’s probable reaction.
Ribbentrop answered quietly: ‘I assume that the French will hand in a similar ultimatum within the hour.’
As my duty was now performed, I withdrew.
To those in the ante-room pressing round me I said: ‘The English have just handed us an ultimatum. In two hours a state of war will exist between England and Germany.’
In the anteroom, too, this news was followed by complete silence. Goering turned to me and said:‘If we lose this war, then God have mercy on us!’
Goebbels stood in a corner, downcast and self-absorbed. Everywhere in the room I saw looks of grave concern, even amongst the lesser Party people.”
Tagged as: Fact File, Modern
Share this post: