Posted on 11th January 2021
During the investigation into the Jack the Ripper murders the police were to receive hundreds of letters that claimed to be from the notorious killer. Most of these were obvious hoaxes but three in particular have since come under repeated and intense scrutiny. They were the Dear Boss Letter, the Saucy Jack Postcard and the From Hell Letter:
On 27 September 1888 almost three weeks after the murder of the Ripper’s second victim Annie Chapman the Central News Agency of London received the letter below which they forwarded to Scotland Yard the following day. It read: 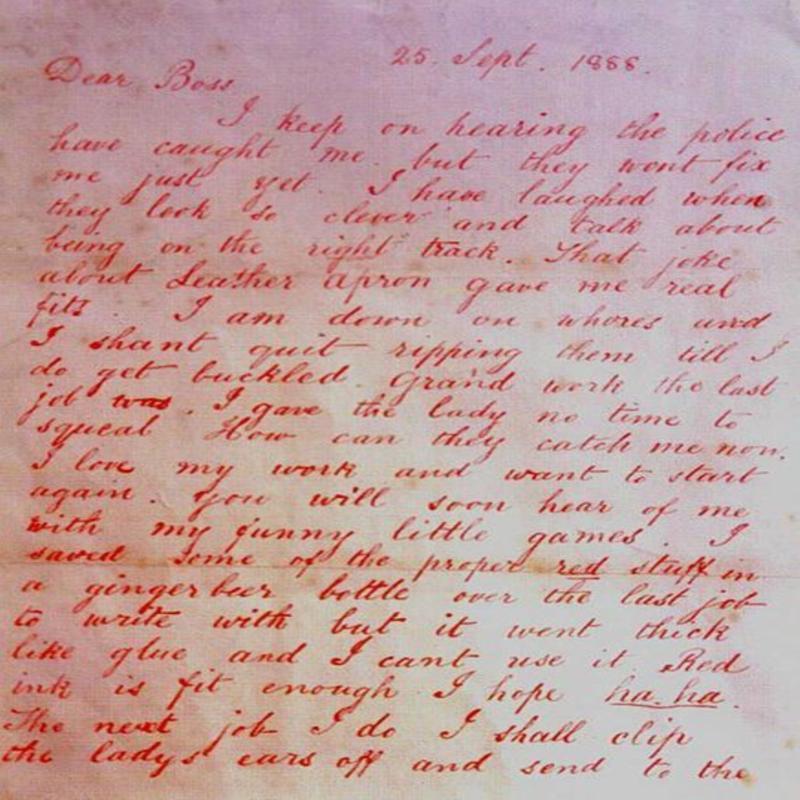 Dear Boss
I keep on hearing the police have caught me but they wont fix me just yet. I have laughed when they look so clever. That joke about Leather Apron gave me real fits. I am down on whores and I shant keep ripping them till I do get buckled. Grand work the last job was. I gave the lady no time to squeal. How can they catch me now. I love my work and I want to start again. You will soon hear of me with my little funny games. I saved some of the proper red stuff in a ginger beer bottle after the last job to write with but it went thick like glue and I cant use it. Red ink is fit enough I hope ha ha. The next I do I shall clip the ladys ears off and send them to police officers just for jolly. Keep this letter back till I do a bit more work, then give it out straight. My knifes so nice and sharp I want to get to work right away if I get a chance. Good luck. Yours truly
Jack the Ripper
Dont mind me giving the trade name
The Dear Boss Letter was the first time that the name Jack the Ripper had been used in relation to the murders but this in itself came as little surprise to the police as Jack was a generic comic book name used regularly in the Penny Dreadfuls of the day for all things wicked or harsh whether it be Jack Frost, Jack O’Lantern, Jack in the Box, or Spring-heeled Jack.
At first the police did not take the letter very seriously but when the body of Catherine Eddowes was found three days later with one of her ear lobes severed the mention of clipping the lady’s ears made them think again.
The letters mocking tone had also made the police reluctant to release it to the press but they now thought they had little choice. In the next few weeks they were to receive many more letters claiming to be from the Ripper as he was now known taunting the police in a similar way.
On 1 October the police received a postcard that had been sent that same day. It was also only hours after the double-murder of Elizabeth Stride and Catherine Eddowes: 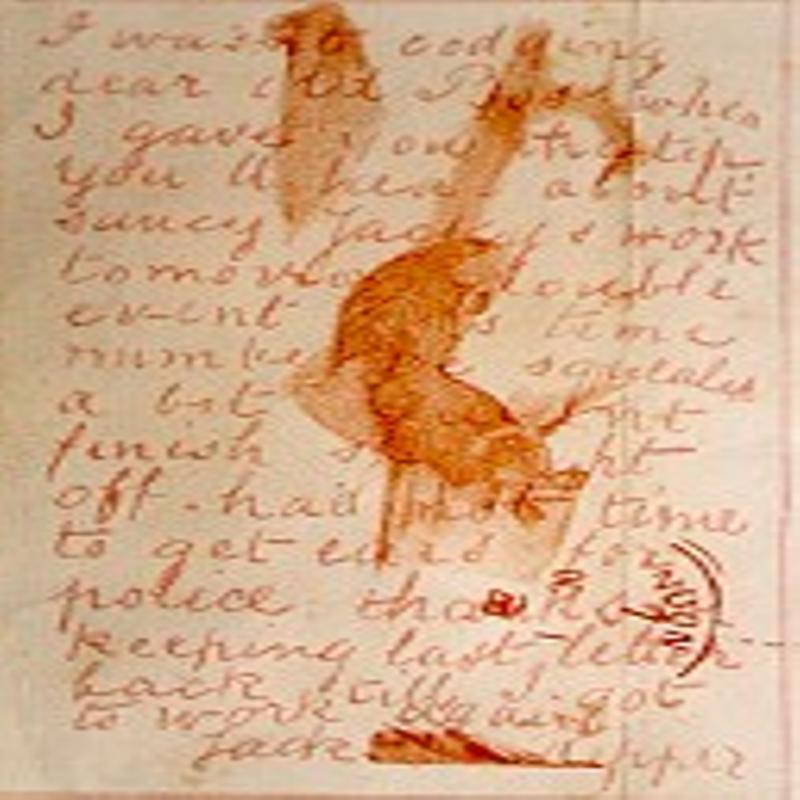 I was not codding dear old Boss when I gave you the tip, you’ll hear about Saucy Jackys work tomorrow double event this time number one squealed a bit couldn’t finish straight off. Had not got time to get ears off for police thanks for keeping last letter till I got to work again."
Jack the Ripper
The Saucy Jack Postcard intrigued the police because it appeared to have been written by the sender of the Dear Boss Letter to which it made reference but also the double-murder before details of it had been released. Some are sceptical about this however suggesting that such was the fevered atmosphere surrounding the Ripper murders that the news of the most recent killings would have hit the streets within minutes of the bodies being discovered.
The From Hell Letter was received on 16 October by George Lusk the Chairman of the Whitechapel Vigilance Committee, a controversial figure who was either a fierce anti-Semite who sought to see the East End’s immigrant Jewish population blamed for the murders, a sinister Freemason working in the interests of his powerful friends, or a concerned citizen trying to help the police rid his community of a dangerous killer
depending on your point of view. Some even believed that Lusk had posted the letter to himself to enhance his own reputation and importance in the investigation though his behaviour towards it does not seem to indicate this was the case. The letter was received with a small box that contained half a kidney: 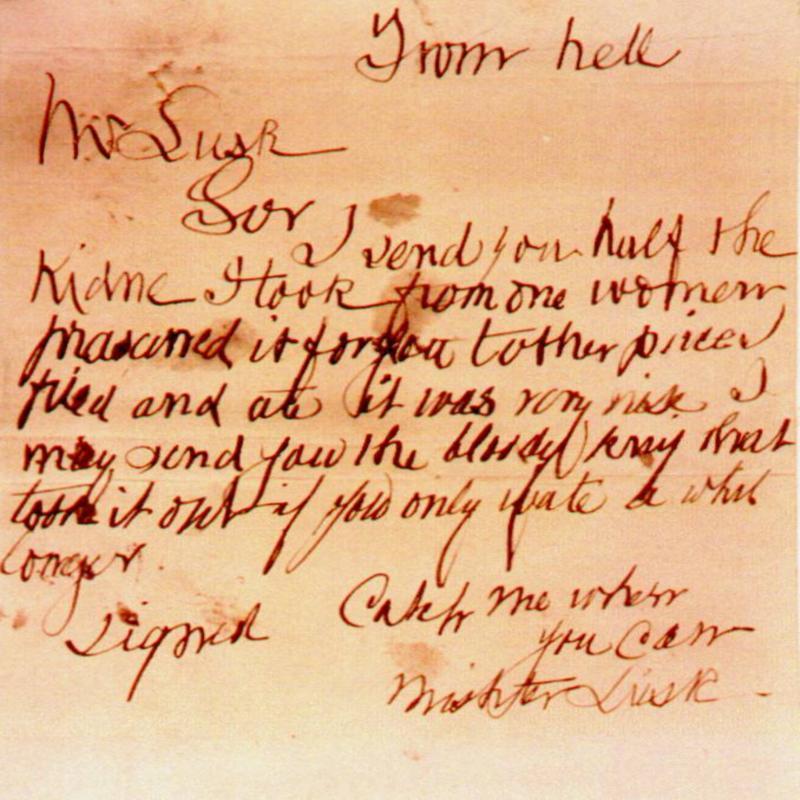 From Hell
Mr Lusk
Sor
I send you half the kidne I took from one women preserved it for you the other piece I fried and ate it was very nice. I may send you the bloody knif that took it out if only you wate a little longer.
Signed
Catch me if you can Mishter Lusk
Like many people since the police at the time were sceptical as to the authenticity of any correspondence they received and would later blame journalists for stoking public anger by writing their own Ripper letters and then publishing them in their own newspapers. In some cases they were almost certainly right but there remains enough interesting detail in the ones above mentioned to suggest they were not all faked: the writing on both the Dear Boss Letter and the Saucy Jack Postcard is neat and similar in style and the misspellings and occasional bad grammar appears to be contrived. Was this a deliberate attempt on the part of the killer to disguise his true background?
The From Hell Letter is very different in that it appears to have been written in haste by someone of little education and the misspellings and grammatical errors appear genuine. It could of course again be a deliberate attempt by the murderer to provide no clues as to his true identity but it does seem that the letters could not all have been written by the same hand. It was also not signed Jack the Ripper.
Were the letters genuine, are they the words of the notorious Jack the Ripper or simply those of a clever journalist, and do they offer us a clue as to his true identity? That is for you to decide.
Following the end of the Jack the Ripper investigation all three letters mysteriously disappeared from the police files for many years. They have since been recovered but the original postcard has never been found and what remains in the files now is a facsimile of it taken at the time.
Tagged as: Fact File, Victorian
Share this post: