Posted on 14th April 2021
Jesse James was a hero of the American West but also a cold-bloodied killer who as a pro-slavery rebel fought in the vicious internecine struggle on the Kansas-Missouri border during the Civil War, a war he refused to surrender at the end of and was determined to continue by any other means available. His subsequent bank raids and train robberies were written up as the acts of a Southern patriot but he gradually became a man out of tune with a country that had moved on and by the end robbed of his kudos and thereby his protection he was vulnerable, and he knew it.
Jesse Woodson James was born in the small town of Kearney in Clay County, Missouri, on 5 September 1847. His father, Robert, a Baptist Minister died when Jesse was aged just 2 and he, his elder brother Alexander Franklin and his younger sister Susan Lavernia were raised by their formidable mother, Zerelda who was to remarry twice in Jesse’s lifetime first briefly to Benjamin Simms, and then in 1855 to a doctor, Reuben Samuel. These liaisons were to provide Jesse with a further four half-brothers and sisters.
Missouri was a Border State where tensions ran high between pro and anti-slavers after the Kansas-Nebraska Act sidestepped the issue by leaving it to be settled by those on the ground.
Jesse’s father had owned slaves who he used to grow and harvest the tobacco on the farm while his step-father Reuben Samuel similarly was a slave owner and it was clear from an early age where the young Jesse’s sympathies lay. Upon the outbreak of the Civil War, Frank James left the family home to join pro-Southern guerrillas under the command of William Clark Quantrell. 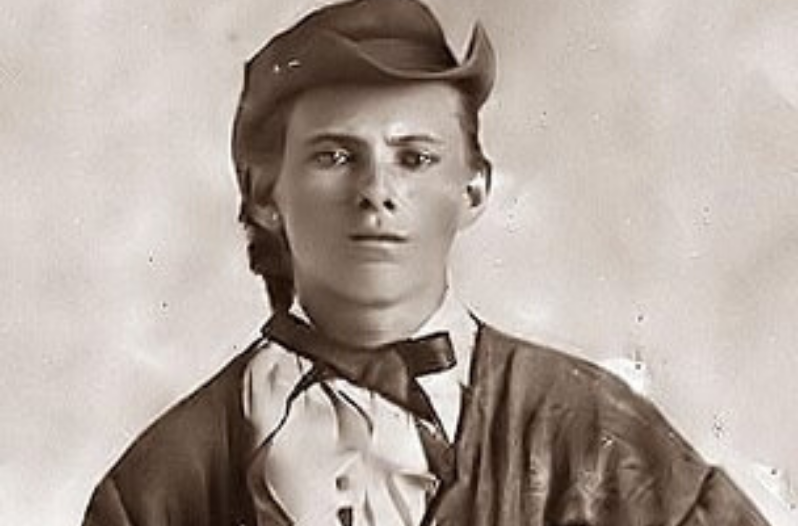 Encouraged by his close friend Archie Clement who had already volunteered for Quantrell’s Raiders, Jesse joined in 1863 when he was aged just 15. Along with his brother Frank he is believed to have been present when Quantrell set ablaze the town of Lawrence and killed 180 civilians; and he was certainly a participant in the Centralia Massacre when Bloody Bill Anderson with around 80 guerrillas stopped a train carrying 23 unarmed Union soldiers returning home on leave and executed them. It is believed Jesse was participated in the subsequent mutilation of the bodies. It was also around this time that he became acquainted with many of the men who would go on to form the James Gang, in particular the Younger Brothers.
Because of Jessie and Frank’s pro-rebellion activities the James family were expelled from their home and land and it grieved the young Jesse that his family were made to suffer for his actions and that he was unable to defend them. Furious with the Yankees as he called then for penalising innocent women and children he determined to punish them again and again – it was an anger that never left him.
Upon the conclusion of the war both Jesse and Frank refused surrender and hand over their weapons. In the fire fight that followed Jesse received a wound to the chest that almost killed him but both he and Frank managed to make their escape. Missouri which had been left effectively lawless would prove fertile ground for the soon to be James Gang to operate from.
Jesse James may have refused to accept the fact but the slaves had been freed regardless and now made up the majority of the State Militia; known ex-Rebels were barred from voting and holding public office, Northern carpetbaggers bought up land and asset-stripped abandoned farms, Federal placemen governed the State as if it were a colony, and Frank and Jesse James remained wanted men. It was a dangerous place to be.
On 13 February 1866, Archie Clement and his gang robbed the bank in the town of Liberty a deed now acknowledged be the first peacetime bank robbery in American history and it is almost certain that Jesse and Frank James participated. Later that same year Clement returned and robbed the town itself killing the Mayor and two others in the process.
Archie Clement, who at only 5’2″ was known as “Little Arch” had taken over command of Bloody Bill Anderson’s gang following his death in October 1864 and like the James boys believed the Civil War had never ended. In the 1866, elections for public office held in Missouri the disbarment of known ex-Confederates from the electoral roll should have ensured a resounding Republican victory but it didn’t. Clement with more than a hundred former Confederate Bushwackers ensured the elections went the way of the pro-slavery Democrats.
On 13 December 1866, in a deliberate act of bravado and intimidation he led his men in a show of force through the streets of the Missouri State Capital of Lexington. Major Bacon Montgomery, in charge of the State Militia declined to confront Clement instead placating him and accepting his de facto authority. Perhaps lulled into complacency, Clement returned alone to Lexington later that night to drink in the saloons.
Learning of this, Montgomery determined to arrest him and surrounding the saloon with troops demanded his surrender. Having previously refused to surrender to the Union Army, Little Arch was never going to give himself up to Bacon Montgomery and he came out fighting as dodging the bullets that whistled past him and tore at his clothes he managed to mount his horse and rode furiously down Main Street firing as he went. But not far from safety his horse slowed, he writhed in the saddle, and slumped to the ground. Unable to move his arms he tried to pick up his pistol with his teeth. One of his pursuers approached cautiously but seeing him lying there bleeding profusely and breathing only with difficulty lowered his pistol saying: “Arch, you are dying, what shall I do with you?” He replied, “I have done what I said I would always do, that I’d die before I ever surrendered.” He was just nineteen years of age.
Following Archie’s death his old friend Jesse James was more than willing to take up his mantle but he didn’t come to prominence or capture the public imagination until his cause was taken up by a pro-Confederate journalist from Kansas, John Newman Edwards. He would write up Jesse’s escapades portraying him as an honourable man who was leading Southern resistance to Northern exploitation and oppression. He loudly trumpeted and hailed his achievements and regularly published Jesse’s letters justifying his actions.
Jesse, his brother Frank, the Younger Brothers and various other ex-Confederate guerrillas would make up what was to become known as the James Gang and they now embarked upon a series of spectacular bank, train, and stagecoach robberies not just in Kansas and Missouri but as far away as Iowa, Texas and West Virginia.
On 21 July 1873, they robbed the Rock Island Train at Adair in Iowa, killing two men. While doing so they wore Ku Klux Klan outfits in open defiance of President Grant’s proscription of the organisation. Often they would play to the gallery and on one memorable occasion they even robbed a State Fair.
Jesse rarely robbed civilians which earned him the reputation as a Robin Hood character though there is no evidence that he ever gave money to the poor, or to anyone else come to that other than perhaps his family. 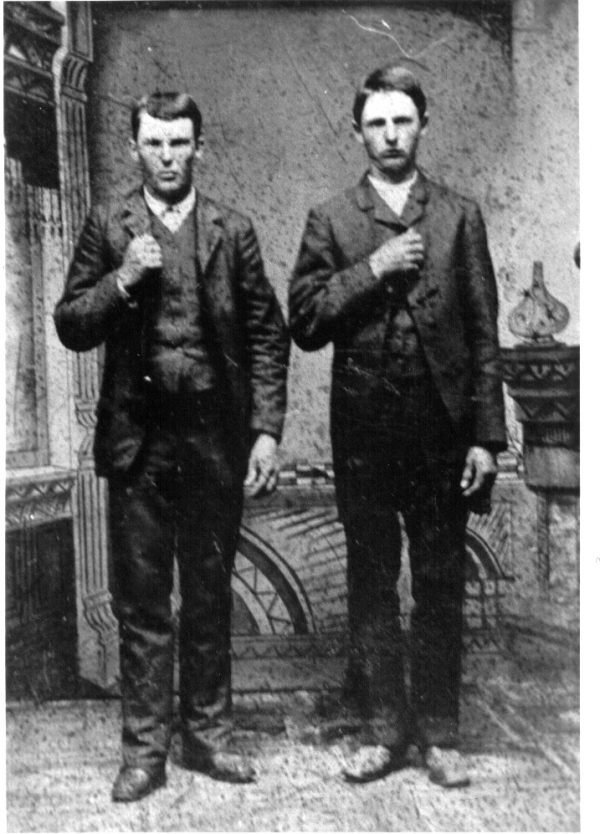 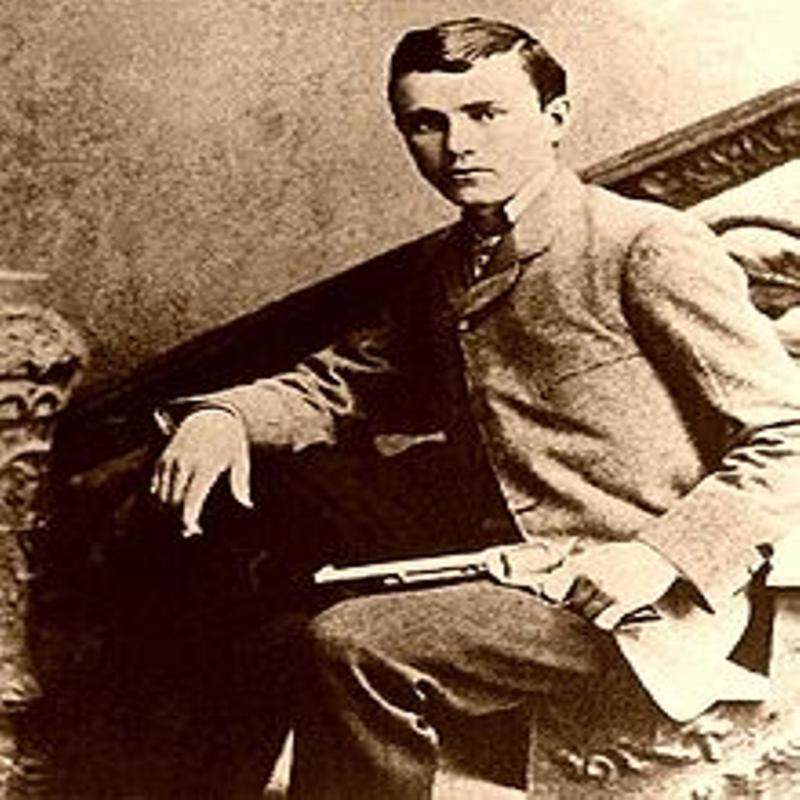 Bob and Charley Ford had committed cold-bloodied murder but they did nothing to hide what they had done. Indeed, Bob even wired the Governor demanding his share of the reward. Instead, much to their astonishment they were arrested, tried, and convicted of murder but sentenced to hang by a Missouri Court they were to be pardoned by Governor Crittenden.
Having received just a fraction of the reward both Bob and Charley were forced to flee Missouri in fear of their lives. But there was no place to hide from what they had done.
On 6 May 1884, Charley Ford, consumed with guilt committed suicide. Bob Ford briefly tried to cash in on his fame but constantly looking over his shoulder soon descended into a life of alcoholism and bar-room brawls. He was shot to dead following just such a brawl in the town of Creed, Colorado, on 8 June, 1892.
Upon learning of his brother’s death Frank James surrendered himself to Governor Crittenden on the promise of a fair trial, and he was indeed acquitted of all charges despite being just as culpable as his brother Jesse had ever been. He now disappeared into obscurity making a living doing mostly menial jobs and only tried to cash in on his brother’s fame when late in life he was no longer able to work. He died on 18 February 1915, aged 72.
Following his death the legend of Jesse James just grew and grew and not all who had known him displayed the same reluctance to cash in on his fame as his brother Frank had. His mother Zerelda was certainly eager to do so and she had inscribed on his tombstone the epitaph: “In Loving Memory Of My Beloved Son, Murdered By A Traitor And Coward, Whose Name Is Not Worthy To Appear Here.” She then charged people 25 cents a time to see it.
As a postscript, in 1948, a man named Frank J Galton, who at a hundred years old would have been around the right age and had indeed been a Southern guerrilla fighter during the Civil War, claimed to be Jesse James. He said that he had conspired with the Ford brothers to shoot dead a member of the Gang and pass the body off as himself as part of an elaborate plan to fool the Authorities. His claims were never verified and were later dismissed by the James family
Tagged as: Miscellaneous
Share this post: