Posted on 7th May 2021
Evil takes many forms but when it is perpetrated for the advancement of the human race it becomes not the callous act of an individual but instead speaks to us of the barbarity of mankind. When man plays God the entire world need tremble. One such man was, Josef Mengele.
He was born on 16 March 1911, in the small Bavarian town of Gunzburg where his family were suppliers of agricultural machinery. They were prosperous and respected locally but the young Josef had no intention of remaining, he wanted to be a doctor.
Handsome and ambitious he was also politically active and aged twenty joined the Stahlhelm, a paramilitary organisation that was formed to protect the meetings and intimidate the opponents of the right-wing German National People’s Party.
In 1935, he graduated from the University of Munich with a PhD in physical anthropology and two years later in January 1937 he started work at the Institute of Hereditary Biology and Racial Hygiene in Frankfurt. He now resigned from the Stalhelm, joined the Nazi Party and in July 1939, married Irene Schonbein by whom he had a son Rolf, but Mengele was interested in a career not family and the war ensured that they spent little time together. They were to later divorce 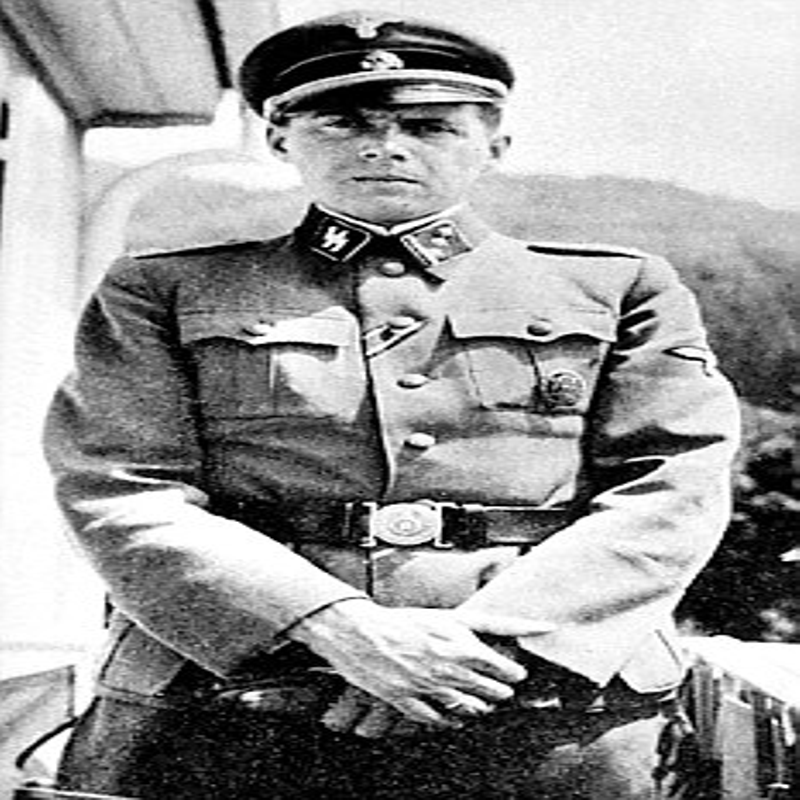 Drafted into the army in 1940 he was soon transferred to the Waffen S.S Viking Division where he participated in the invasion of the Soviet Union in July 1941. His time as a front-line soldier was short-lived however, and after being promoted to the rank of Captain, wounded and awarded the Iron Cross he was deemed unfit for front-line service but his war was far from over. As a man who entirely endorsed Nazi racial theories and believed in the superiority of the Aryan Race he now determined to prove it scientifically by eradicating inferior genes and developing master race characteristics. So he sought permission to continue his research into the nature, cause and effects of hereditary disease.
He believed racial purification could be secured and he would achieve it through a study of genetic anomalies and birth defects and of course through experimentation. The Jews he believed should be exterminated but like other sub-human species such as Gypsies and Slavs their current existence should be put to good use and for the benefit of humanity. 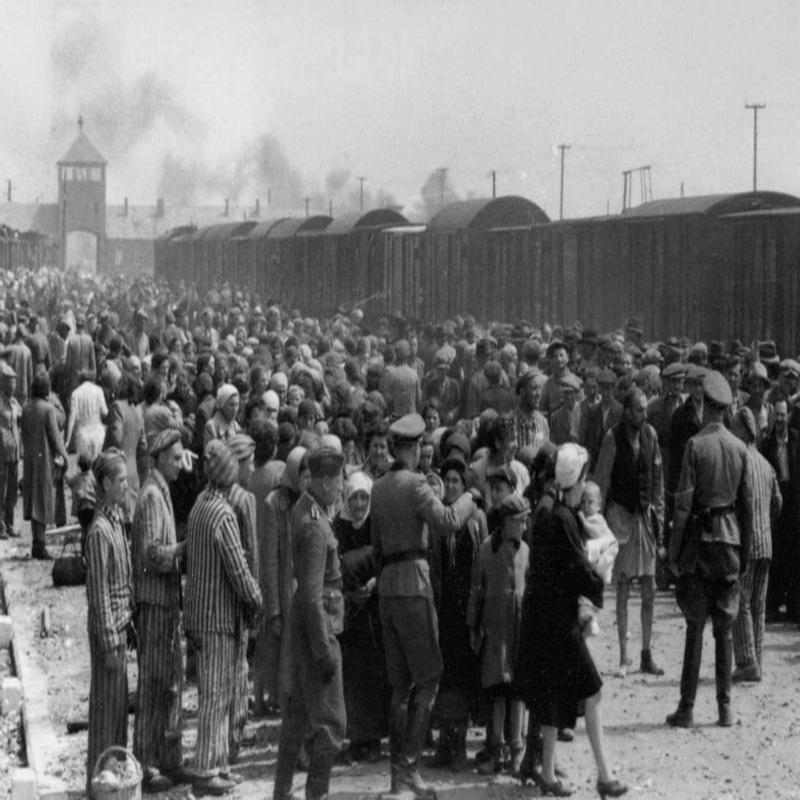 On 24 May 1944, he was assigned to Birkenau Gypsy Camp but when this was liquidated in August 1944, he became Chief Medical Officer at Auschwitz and though there were more than 30 Medical Officers at Auschwitz it was Mengele who would be most remembered by the inmates of the camp. They would recall his handsome features, his ready smile, and how immaculately dressed and wearing his white coat he would stand on the ramp every morning and afternoon to greet the incoming prisoners as they alighted from the trains.
He would walk the line, inspect them, share small talk with those who spoke German and then indicate with his arm those who were to go to the right and join a work detail and those who were to go to the left and join the queue for the Gas Chamber.
His constant presence and pleasant demeanour earned him the name White Angel but at the selection point and in the laboratory where he decided who lived and who died he would soon be referred to as the Angel of Death.
Always on the prowl for new specimens for his research he was particularly interested in children, dwarfs, identical twins and those who were chosen by Mengele were seen to have been fortunate for they were spared the Gas Chamber and this somewhat bizarrely, earned him the reputation as a protector. As a survivor, Eva Mozes Kor was later to recall: “It was better to be on Mengele’s list than it was to be on no list.”
The always smiling Mengele treated the children well. He was friendly, he would stroke their hair and pat them on the cheek and they were provided with clean clothes, given sweets, and would be driven around the Camp in his personal staff car. He liked them to refer to him as uncle. But the children quickly came to fear his violent temper.
Once when a mother refused to hand over her daughter to him he physically wrenched the child from her grasp and then beat her so severely that she had to be carried away. He then ordered that the entire trainload of recently arrived inmates be taken immediately to the Gas Chamber. On another occasion angered that one of the blocks that housed the inmates needed to be deloused he ordered that it would be simpler just to gas the 750 female prisoners that lived there, and they were - It was also no coincidence that his laboratory he’d had built next to the Crematorium. 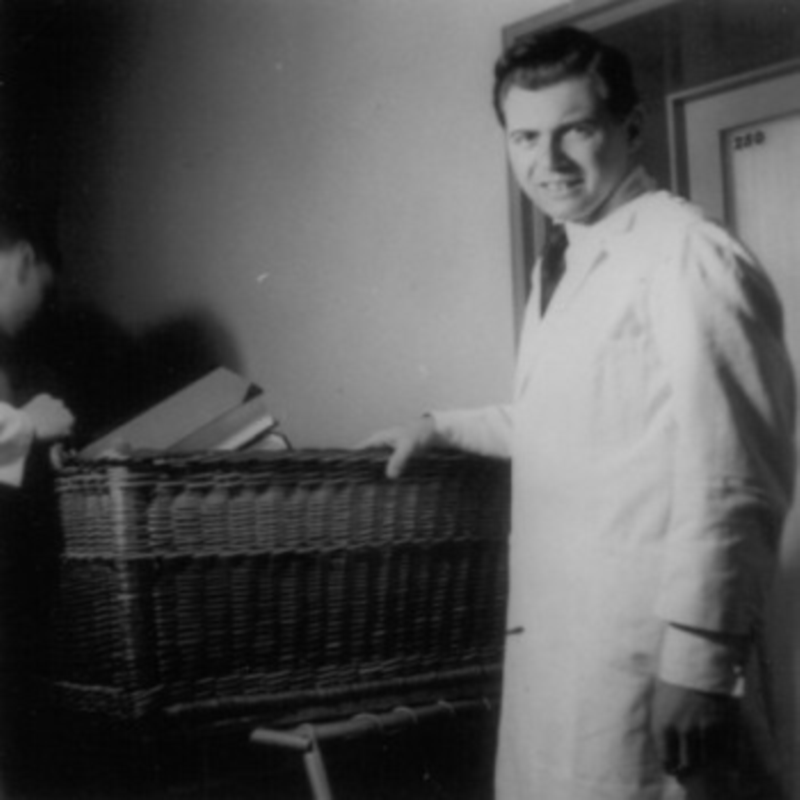 Mengele’s laboratory was an antiseptic chamber of horrors and it was here that he would carry out his peculiar, vile and increasingly unscientific experiments. These included injecting chemicals into the eyes of his victims to test their pigmentation, burning prisoners alive in giant ovens to see how burns developed, having victims immersed in freezing water to see how it affects the skin, confining them in sub-zero temperatures to see how long it would take them to die, sewing together twins to make them co-joined, and carrying out live operations without anaesthetic, including the removal of the internal organs. Those who survived under his knife he would dispatch with an injection of Chloroform into their veins.
It is difficult for us to imagine that Mengele ever thought his work would be accepted as valid medical research by future generations. Yet he firmly believed that it would, taking copious notes and documenting everything keeping it all in an elaborate and well-maintained filing system.
The advance of the Soviet Army saw Auschwitz abandoned on 27 January 1945 and Mengele was transferred to Belsen and later Matthausen Concentration Camp where he continued his anthropological studies and wherever he went he was accompanied by a convoy of trucks carrying his research material.
As the Soviet Army continued its inexorable advance and overrun the Camps, Mengele was forced to flee west where to his fury he was ordered to abandon his research by a superior so that the trucks carrying it could be put to military use.
With his research lost and no laboratory to work from hejoined a Wehrmacht Medical Unit but as the war drew to its close and desperate not to be taken by the Russians he surrendered to the American Army at the end of May, 1945. Despite registering under his own name the Americans believed his story that he was just a private soldier and he was released two months later.
Under the protection of his family he now settled in the small village of Rosenheim in Bavaria where he worked as a farmhand but sensing that it was only a matter of time before the Authorities came for him with the assistance of the underground ODESSA organisation in May, 1949 he fled to Argentina.
Safe at last, Mengele first worked as an unlicensed doctor carrying out backstreet abortions and as a carpenter and a salesman but in time he was to meet other ex-Nazi’s in Buenos Aires, including one of the architects of the Holocaust Adolf Eichmann, and with their assistance he was able to purchase an interest in a number of small companies and prosper as a businessman.
Mengele lived openly in the city under his own name and was confident enough to invite members of his family to come and stay with him. In 1956 he returned to Germany to visit his son Rolf and spent a week in his hometown. 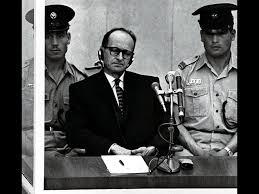 The freedom to live as he wished without fear of censure or compromise came to an end in 1960 when his friend Eichmann was kidnapped by Agents of the Israeli Mossad, taken to Tel Aviv, tried, convicted of war crimes and executed. Those who had abducted Eichmann had also been aware of Mengele’s presence in the city but not wanting to endanger the capture of Eichmann they had given him a pass. It was a lucky escape.
Mengele now fled to Paraguay where he changed his name but still feeling insecure he moved onto Brazil where he settled in a suburb of Sao Paolo. It has been suggested that during his time in the city he resumed his research and operated on local people. The nearby municipality of Candido Godoi was known to have had an unprecedented high birth-rate of twins, one-in-five, many of whom were blonde-haired and blue-eyed and with Nordic features. There is no evidence that this anomaly had anything to do with Mengele, but it was a coincidence that did not go unnoticed.
Though he had been indicted as a War Criminal as early as 1944 no special effort had ever been made to apprehend him but shaken by the fate of Eichmann he now lived in constant fear of capture. As a result, he went into hiding and much of his life thereafter is shrouded in mystery as he went from house to house and hotel to hotel. Investigators searched for but were unable to pin him down and it wasn’t until 7 February 1979, when reports emerged that he’d had a stroke whilst swimming in the sea off the coast of Bertioga in Brazil and drowned that he was finally located. Forensic tests would later confirm that the body washed up was that of Josef Mengele.
He had remained an unrepentant Nazi to the end and is never known to have expressed any remorse for his wartime activities. Quite the opposite in fact, he often declared his innocence of any wrongdoing and bemoaned the fact that his research had been lost and not preserved for posterity. It should have been taken seriously and widely distributed, that it was not was sciences loss.
Though he may have had to live his final years on the run constantly looking over his shoulder and forced to rely on friends Josef Mengele the Angel of Death had escaped justice.
When the Brazilian Authorities sought to repatriate his remains to Germany his family refused to accept them.
Tagged as: Modern
Share this post: