Posted on 30th March 2021
Napoleon Bonaparte was a man who felt no greater love than that he had for himself. He adored his own reflection, its image and its glory. He craved power and for twenty years he fought the combined Nations of Europe to acquire it. He was then, the great Man of Destiny. But there was a moment, perhaps a fleeting one, perhaps not, when he loved another more.
The future Empress of France was born Josephine Rose Tascher de la Pagerie on 23 June 1763, on the Caribbean Island of Martinique the daughter of a wealthy family who owned a sugar plantation on the island.
She didn’t travel to mainland France until October 1777, when her family decided that aged 14, it was time for her to make a good and profitable marriage. They didn’t have long to wait for just two years later she wed the wealthy aristocrat Alexandre de Beauhernais. 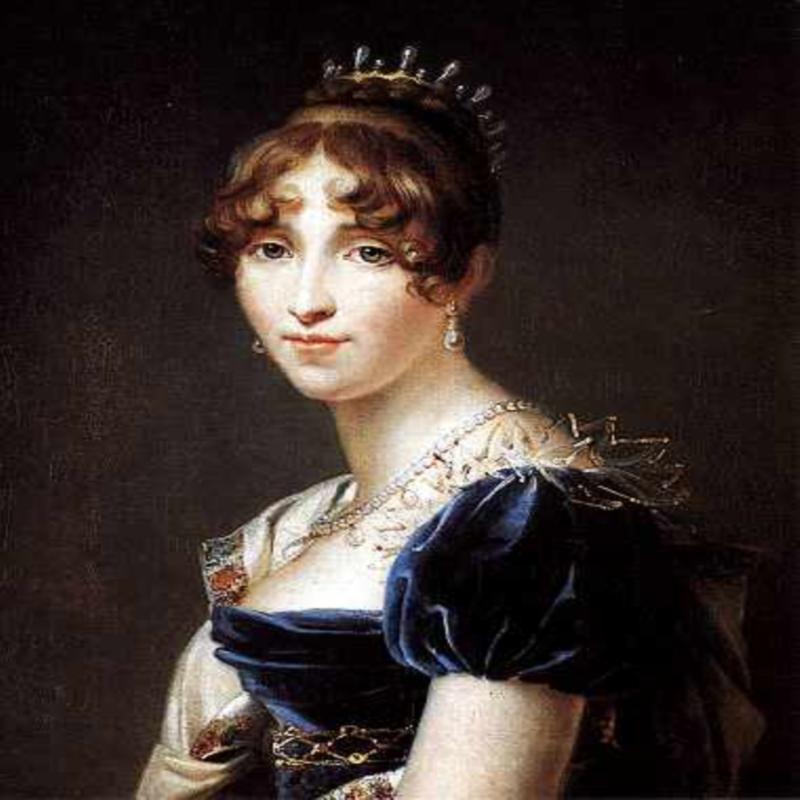 She may not have been aware of it but young Josephine had just rescued the family’s fortunes for they were not as wealthy as they first appeared. Yet the marriage itself was far from a match made in heaven for when the couple weren’t arguing they weren’t talking; but that wasn’t the point – she would provide the children, he the money.
Alexandre de Beauhernais wasn’t just a landed aristocrat who enjoyed the fruits of his inheritance he was a speculator on the financial markets or someone who was perceived to profit from the misery of others. He had been opposed to the Revolution of 1789 and with the advent of the Terror and the Law of Suspects he was soon arrested and charged with counter-revolutionary activity. Not long after a warrant was also issued for the arrest of his wife. After a cursory trial Alexandre was guillotined on 23 July 1794, and Josephine was only saved from a similar fate by the fall of Maximilien Robespierre a few days later.
Josephine was subsequently released from prison but in a state of destitution it was time for her to reinvent herself.

She was considered pretty with long brown hair, pale complexion, small hands, pert breasts and a voluptuous mouth though she rarely smiled because of her bad teeth. She was only of average height but even so was as tall as her soon to be lover. To these physical attributes she now added a graceful elegance and a modulated voice that rarely rose above a whisper.
At the same time as Josephine was once again placing herself on the market the fortunes of an obscure artillery officer from Corsica, Napoleon Bonaparte, were being transformed. They were to meet but not before Josephine had embarked upon a series of affairs with some of the most prominent politicians in France.
She was first introduced to Napoleon by her then lover Paul Barras, one of the five members of The Directory who were ruling France following the fall of the Revolutionary Government. It has been suggested that Barras tired of her spendthrift ways had deliberately introduced her to Napoleon in the hope of getting rid of her. If so it worked, Napoleon was hopelessly smitten and within two months of proposing to her they were married.
Love and mutual attraction was not necessarily the prime motivation behind their relationship, at least certainly not on Josephine’s part. She was eager to be married to the man who everyone could she would soon be the most powerful in France. Napoleon was also keen to have her political contacts. Even so it appeared that the ambitious Napoleon had at last found someone he could adore but it was to be a puppy love. Hopelessly love-struck in her presence and made utterly distraught by her absence he wrote constantly and cloyingly of his love for her:
“I awoke full of you. Your image and last night’s intoxicating pleasure has left no rest on my senses; you to whom nature has given spirit, sweetness, and beauty, you, who alone can move and rule my heart.”
His love letters and pledges of devotion to her person appeared endless but Josephine rarely wrote back even when he begged her to do so which hurt him deeply but Josephine was a woman of the world and found his adoration of her silly, even childish, and she would often read his letters out to her friends for their amusement. 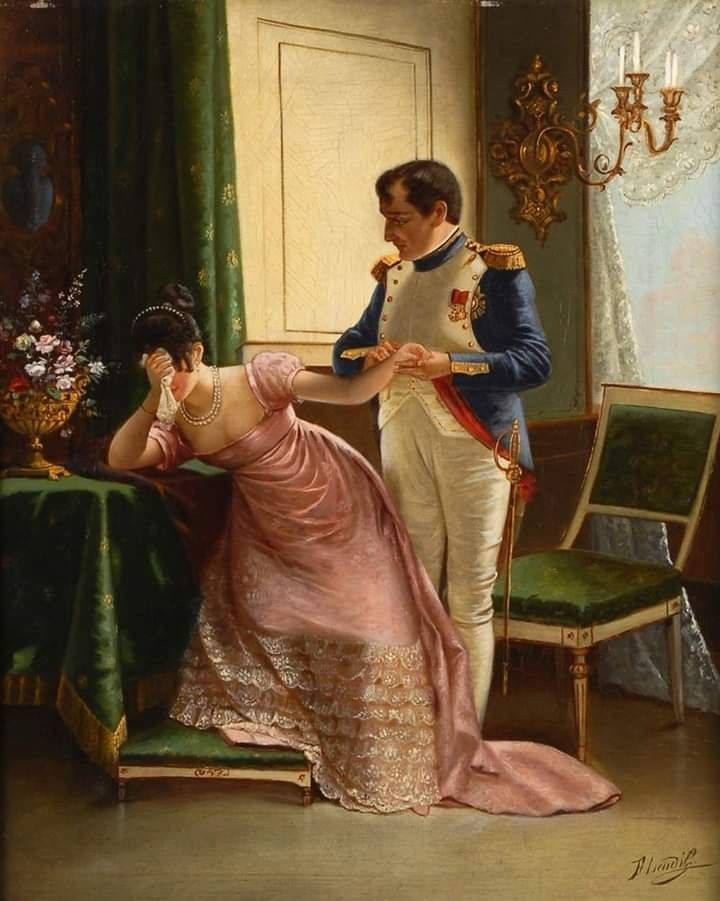 Even now she was determined to secure her financial future and while he was away campaigning in Egypt she took the first of a string of wealthy lovers. When Napoleon heard of this he was furious and responded by having very public affairs of his own. Their relationship would never fully recover from this turn of events and from now on power and the pursuit of it would be Napoleon Bonaparte’s long-term mistress.
On 2 December 1804, despite the enforced presence of Pope Pius VII, Napoleon decided to crown himself Emperor of France with the words spoken in his native Italian, “Dio mio la dona, gai a qui la tocca” (God has given it to me, beware who shall touch it). Then, regardless of the now fractured nature of their relationship he personally crowned Josephine his Empress, just as he had promised her he one day would.
For the next few years they shared a harmonious if not entirely happy marriage for both continued to take lovers though now it was rarely spoken about.
By 1810, Josephine who was six years Napoleon’s senior was 47 years of age and no longer able to bear children. The Emperor needed an heir and acutely aware of his need to secure the dynasty in January of that year she conceded to his request for a divorce.
Her willingness to end the marriage barely disguised her devastation at having done so for though she never came to love her ‘Little General’ the affection they shared was genuine enough. Also, with her looks fading and no longer able to bear children she could neither play the part of the flirtatious courtesan or indeed of the fecund bride. Napoleon was also greatly saddened, she was after all the only woman he had ever loved but dynastic concerns must take precedence. 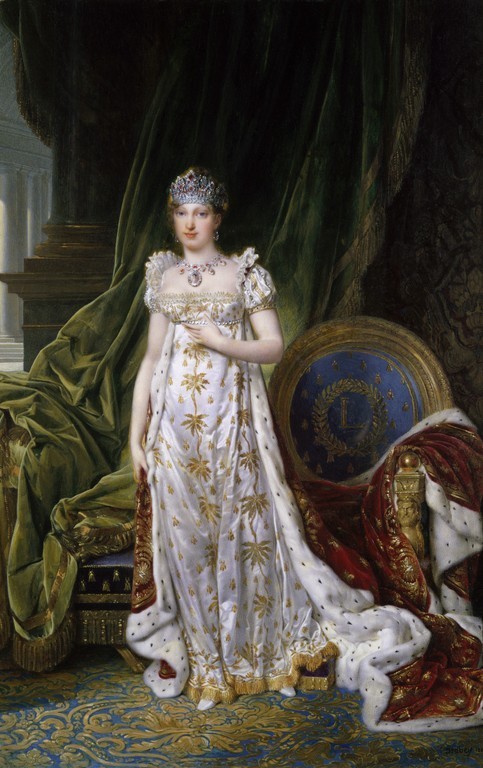 On 11 March 1810, Napoleon wed Princess Marie-Louise the daughter of the Habsburg Emperor of Austria. It was a personal triumph for the son of impoverished provincial nobility to marry into one of the great Imperial Families of Europe though he was later to say that he had “merely married a womb.”
Josephine and Napoleon remained good friends and he continued to pay the debts of his spendthrift ex-wife. He confided in and trusted her more than he ever did Marie-Louise or any of his close colleagues. When on 29 May 1814, she died of pneumonia Napoleon upon hearing the news was visibly shaken, barely able to stand and incapable of holding back the tears.
And it would be Josephine’s daughter Hortense by her marriage to Alexandre de Beauhernais who would be responsible for the revival of the Bonaparte dynasty when she gave birth to the future Emperor Louis Napoleon III. His own son by Marie-Louise was to die when still a child.
During his exile on St Helena, Napoleon was heard to remark:
“I loved my Josephine but I did not respect her.” Yet as he lay dying a few years later the last word he was reported to have uttered was – Josephine!
Tagged as: Miscellaneous, Women
Share this post: