Posted on 26th April 2021
For nine days in July 1553, a sixteen year old girl ruled England as its Queen but by the time she reached seventeen she was dead beheaded on the scaffold. It was the shortest reign of any Monarch in English history.
Lady Jane Grey was born in the autumn of 1536. Her father was Henry Grey, Duke of Suffolk and her mother Frances Brandon the daughter of Henry VIII’s youngest sister, Mary. She was therefore a great-granddaughter of Henry VII and cousin of the Royal children.
Frances Brandon was a capricious and unforgiving woman, a harsh disciplinarian even by the exacting standards of the time some might even say she was cruel. Her daughter Jane by comparison had a sweet and gentle nature which drove her mother to distraction making her determined to bully some iron into her daughter’s soul. But there nothing Jane could ever do that was enough satisfy her mother.
Starved of parental affection and a constant victim of her mother’s vindictiveness Jane kept very much to herself. She once told the visiting Cambridge scholar Sir Roger Ascham, who was to be the future Queen Elizabeth’s tutor:
“When I am in the presence of either Father or Mother, whether I speak, keep silent, sit, stand or go, eat, drink, be merry or sad, be sewing, playing, dancing, or doing anything else. I must do it as if it were in such weight, measure and number, even so perfectly as God made the world, or else I am so sharply taunted, so cruelly threatened, yes presently sometimes with pinches, nips and bobs and other ways, that I think myself in Hell.”
She found solace from her torment in isolation, in books, and in learning. 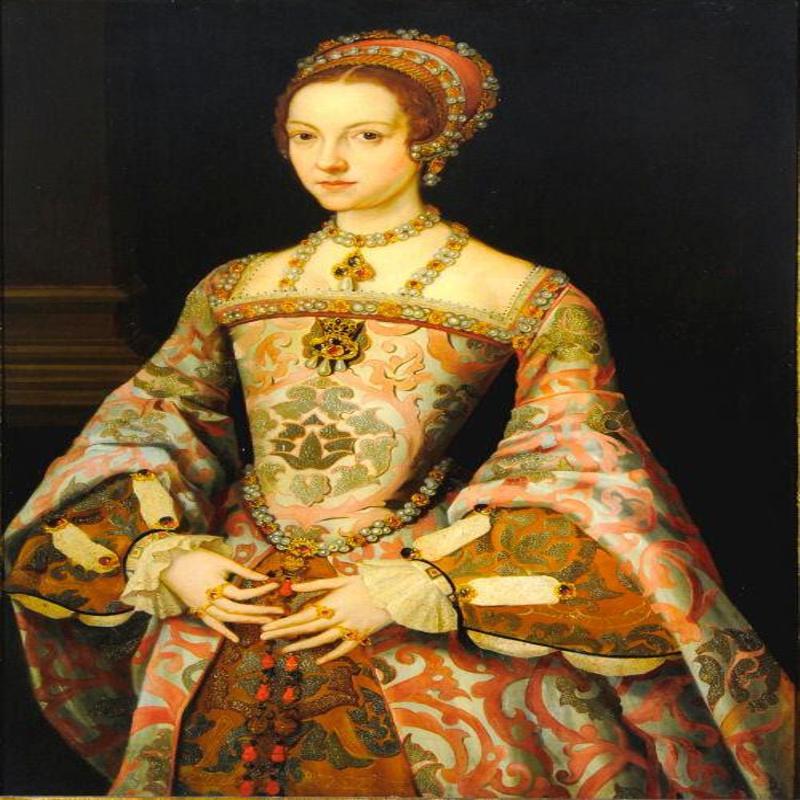 In 1546, an exasperated Frances sent the ten year old Jane to live with Queen Katherine Parr who had married Henry VIII three years earlier. Katherine a very different woman to Frances was kind, caring and enjoyed the company of children. It was to be the happiest period of Jane’s life and whilst there she got to know her Royal cousins Mary, Elizabeth and Edward. All of whom were to speak fondly of their time with Katherine.
On 28 January 1547, Henry VIII died. Katherine did not remain a widow very long and within weeks of the King’s death she married the High Lord Admiral Thomas Seymour. She probably did so for the sake of her own protection but this did not prevent a scandal emerging over her lack of mourning for the recently departed King. It was also rumoured that Seymour had made sexual advances towards the Princess Elizabeth. He may also have sought to molest Jane. Either way, the new situation meant that Jane could no longer remain in Katherine’s care.
In August 1558, Katherine Parr gave birth to a healthy baby girl she named Mary but just a week later died, probably of puerperal fever. Lady Jane was devastated at her loss, Katherine had in effect been her surrogate mother and she attended her funeral as Chief Mourner.
Jane, whose parents no longer had any interest in her was to all intents-and-purposes an orphan. Thomas Seymour now purchased her ward-ship but within the year he was also dead, executed for treason. Jane, who was being passed around like an unwanted gift now became the ward of John Dudley, Duke of Northumberland, who as Chief Adviser to the young King Edward VI was one of the most powerful men in the country. 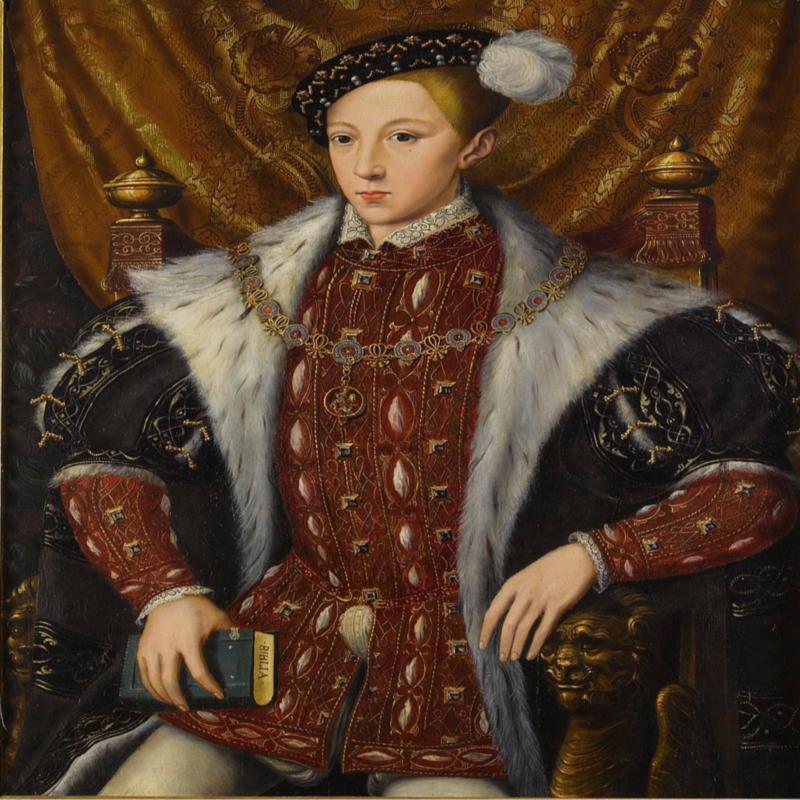 Unlike his father for whom the English Reformation was always the means to an end, Edward was a committed and devout Protestant, a serious and humourless boy who had never had much time for play and during his short reign the religious fabric of the country would be transformed.
In January 1553, the 15 year old Edward became seriously ill. He was probably suffering from a pulmonary disease and it degenerated quickly. It was not believed that he would survive and the need to secure the Protestant Reformation in England now became the question of greatest importance. His half-sister Mary, a devout Catholic had been restored to the line of succession by their father Henry VIII. Edward and Mary had fallen out badly over the religious question and were no longer on speaking terms. Considered a fanatic who would reverse all the reforms of Edward’s reign were she given the opportunity to do so, a way had to be found to prevent Mary becoming Queen. 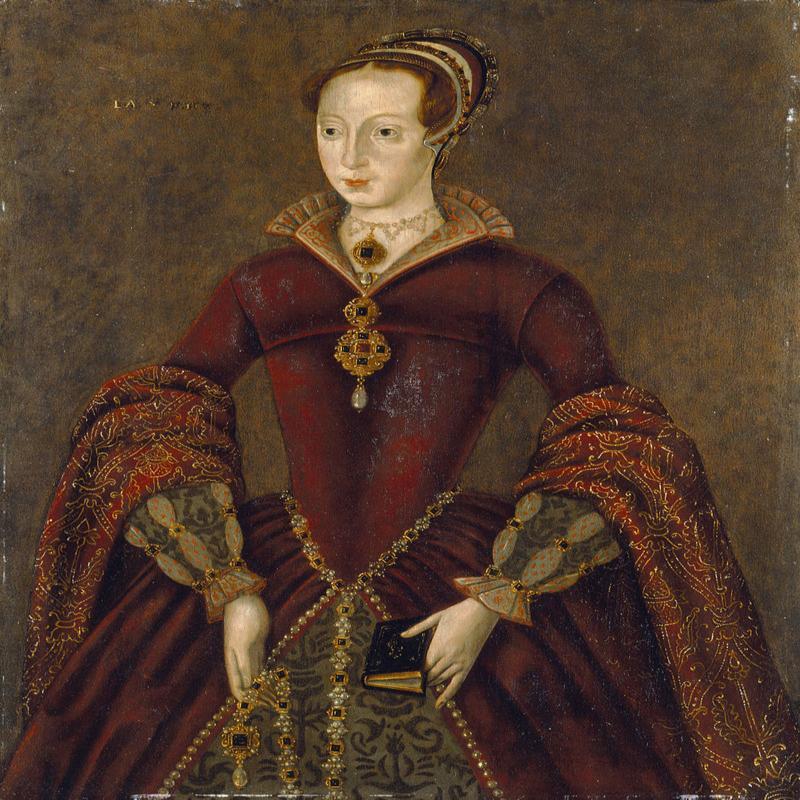 Northumberland, a man of over-arching ambition, now suggested his ward Jane Grey as an alternative. It was a suggestion that appealed to Edward who knew Jane well and was aware of her own devotion to the new religion. In consultations with his Council, Edward drew up the “Devises for the Succession.” that excluded both his sisters Mary and Elizabeth from the line of succession and declared that Lady Jane Grey would become Queen upon his death.
On 6 July 1553, Edward VI died. Four days later Northumberland had Lady Jane Grey crowned Queen of England but he had not taken the precautionary step of ensuring that Mary was safely under lock and key.
She had been advised to flee but aware that to do so would end all hope of her ever becoming Queen she made the decision to remain and gather her supporters around her. To do so had put her life in peril but she was surprised by the number of people who now flocked to her cause. To the people of England she was the old Kings first born, the daughter of the much-loved Katherine of Aragon and the rightful heir to the throne. Few people had even heard of Lady Jane Grey.
The one person who seemed utterly oblivious to events was Jane herself. Her uncle made sure of that for he had earlier warned the late King's Council: This virtuous lady by our enticement is rather of force placed therein than by her own seeking or request." Earlier on 21 May, she had been forced to marry Guilford Dudley, a boy she personally detested for reasons she did not understand. She wasn’t even aware that she was to be Crowned Queen of England until it actually happened.
Few contemporary portraits exist of Lady Jane Grey but she was described in detail by the Genoese merchant Baptista Spinola who witnessed her stately procession to Syon House: “This Lady Jane is very short and thin, but prettily shaped and graceful. She has small features and a well-made nose, the mouth flexible and the lips red. The eyebrows are arched and darker than her hair which is nearly red. Her eyes are sparkling and reddish-brown in colour, her skin freckled, and her teeth white and sharp.”
On the day of her Coronation Jane was resplendent in a green and gold velvet dress but she was a reluctant Queen and during her Coronation declared that: “This Crown is not mine by right and pleases me not. Mary is the rightful heir.” She was admonished by all present for her words and ordered to do her parents and her wards bidding. She did as she was told but as the Crown was placed on her head she said, “I only wear it to see how it fits.”
When she was asked to proclaim Guilford Dudley her King she refused and on this issue she would not budge. She would make him Duke of Clarence and no more, though she later said that she would defer this matter to Parliament.
Jane’s reign was to be short and just 9 days later on 19 July, Mary entered London with her army and the people of the city immediately rallied to her cause. Seeing the tide turning Parliament now revoked the proclamation that had declared Lady Jane Grey Queen and came out for Mary.
Jane was soon to be deserted by all those who had foisted their own ambitions upon her narrow and reluctant shoulders. Jane’s parents immediately denounced her, te Duke of Northumberland was captured and executed before he could flee the city, and both Jane and Guilford Dudley were arrested and imprisoned in the Tower of London. 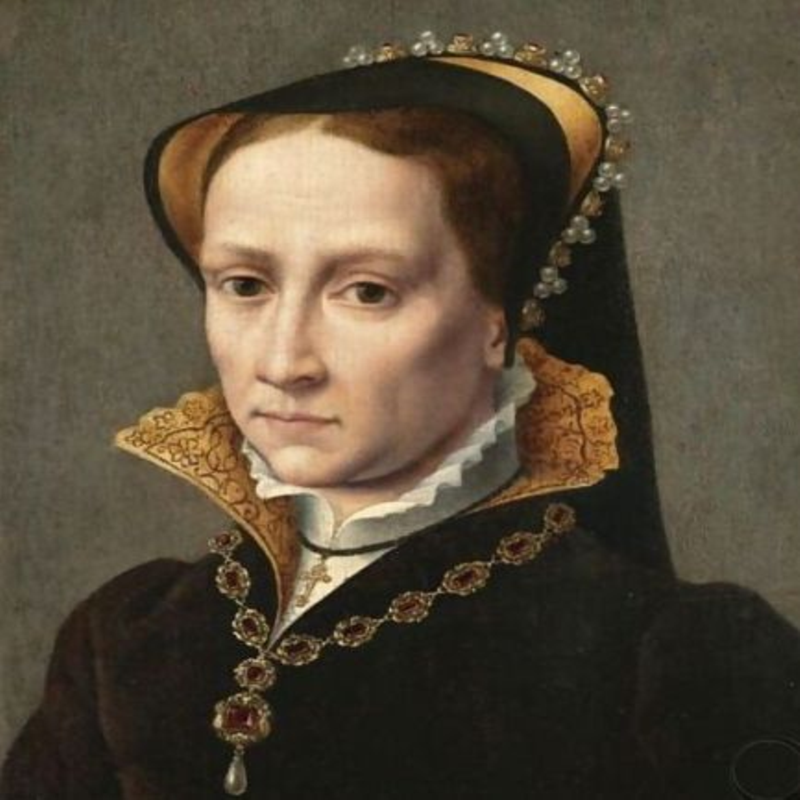 Mary was generous in victory and publicly announced that Lady Jane Grey had been unaware of events, was innocent of any suspicion of treason and so would not be harmed as a consequence.
All this was to change in late January 1554, when Sir Thomas Wyatt, son of the famous poet, led a Protestant rebellion to replace Mary on the throne with her Protestant half-sister Elizabeth. The rebellion was crushed but it sealed Jane’s fate. Mary who was prone to paranoia at the best of times and could be vindictive when it suited her determined that the Lady Jane was a menace and must die. As long as she lived there would be those willing to rise up in her support. The fact that she’d had no support beyond the coterie of ambitious men in the Duke of Northumberland’s immediate circle, and had no desire to be Queen, seemed not to matter at all.
Despite Mary’s public declaration of leniency on 12 February 1554, having been found guilty of treason Lady Jane Grey was led to the scaffold (her husband Guilford Dudley had already been executed earlier that same morning). 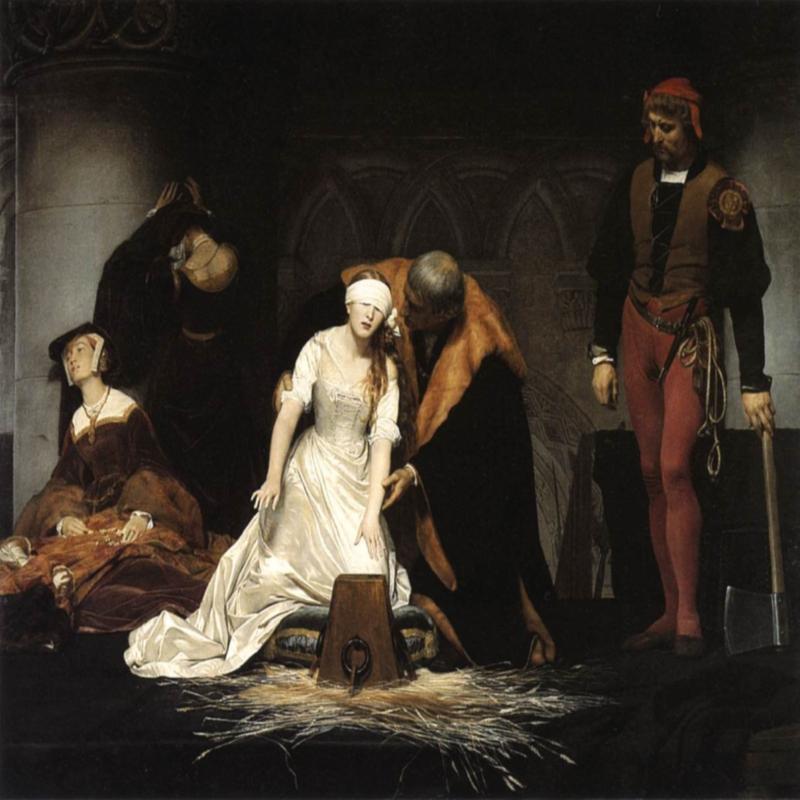 Jane was calm and expressed her remorse at having participated in such folly and Mary out of respect for her cousin had ordered that the execution take place within the walls of the Tower of London away from the public gaze. So Jane was at least spared the baying of the mob. Standing briefly upon the scaffold she addressed those present:
“Good people I come hither to die, and by the law I am condemned to do the same. The fact, indeed, against the Queen was unlawful, and the consenting thereunto by me, and touching the procurements and desire thereof by me or on my behalf. I do wash my hands thereof of innocence, before God.” She then turned to the Executioner and said “I pray dispatch me speedily.”
But blindfolded she could not find the block and began to panic. The sight of this young girl who had tried so hard to maintain her composure stumbling and fumbling around and beginning to weep touched many of those present. Finally she was guided to where she should rest her head and falteringly uttered the words, “Oh Lord, into thy Hands, I commend my spirit.” She then waved her handkerchief as the signal for the Executioner to strike and was beheaded.
Lady Jane Grey had been a pawn in the power games of others: the Duke of Northumberland who had tried to flee at the first sign of danger and her mother and father who had made no plea for clemency on her behalf.
Her execution did untold damage to the reputation of Mary who had earlier declared her innocent of any crime, and the people who had so recently flocked to Mary’s support now abandoned her. She was to be just the first of “Bloody Mary’s” many martyrs.
Tagged as: Monarchy, Tudor & Stuart, Women
Share this post: