Last Days of Queen Elizabeth I

Posted on 28th April 2021
On 24 March, 1603, in Richmond Palace, London, her favourite residence Queen Elizabeth I, the Virgin Queen, died just 6 months short of her 70th birthday. Hers had been a glorious reign. She had been the indomitable defender of the Protestant faith, victor over the Spanish Armada and the Shield of England. She had placed the safe-keeping of her country and her people over her personal happiness. At least according to the Tudor propagandists she had.
For forty four years she had ruled England and most people had never known another Monarch. Such was her lustre that her death seemed unthinkable. It also soon became evident to the people who served her that death was equally unthinkable to Elizabeth herself.
In truth, the Golden Age of Elizabeth had long passed; the ongoing conflict with Spain had seen overseas trade disrupted and the economy hit hard, a series of failed grain harvests had seen famine stalk the land and with crime and vagrancy on the increase and the threat of Catholic incursion remaining the imposition of ever harsher laws saw the gallows busier than ever and England a fearful and anxious place. 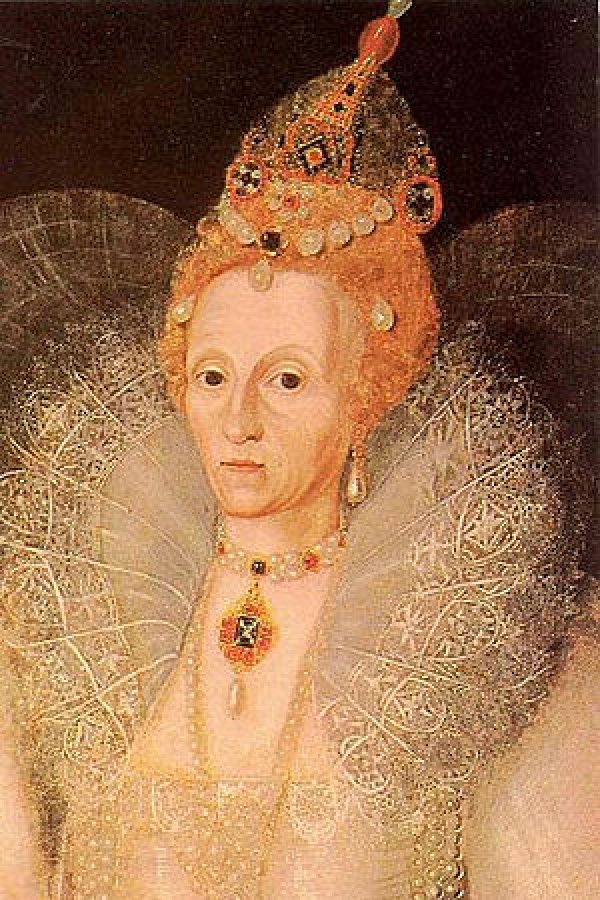 Elizabeth would always be the nation’s Virgin Gloriana but the lustre of her crown was becoming increasingly tarnished. The people knew that she was old and ailing and they were desperate for change but the death of Elizabeth would not just be the passing of a Monarch but the end of an era.
A change of Monarch was always an anxious time and that anxiety was only increaed by the refusal of the childless Elizabeth to name a successor. Her Chief Minister Sir Robert Cecil had been working for some time to secure the succession for James VI of Scotland but fearing the Queen’s reaction if she found out he’d had to do so in secret. Elizabeth’s adamant refusal to contemplate anyone succeeding her opened up the prospect not only of a dynastic crisis but possible civil war and for the weeks leading up to her final illness London had been in a state of virtual lock-down.
For years now her friends and close advisers had been dying. Robert Dudley, the Earl of Leicester her childhood friend and long-time favourite had passed away in 1588, the year of the Armada. William Cecil, Lord Burghley, who had been Chancellor throughout her reign and was in many respects her surrogate father had died on 4 August, 1598.
The loss of Dudley and Cecil were devastating blows to Elizabeth. She and Dudley had been so close since childhood that it had been assumed by many at Court that they were lovers while she had relied upon William Cecil not just for political advice but also emotional support. Even the man who had been charged with her personal protection and of whom she was never particularly fond, her Spymaster Sir Francis Walsingham, had died.
In early 1601 she was given little choice but to execute her young suitor, the Earl of Essex for treason. Elizabeth had always had an eye for a pretty young man and a weakness for flattery. Essex adored her, or so he said. She was the most beautiful woman in England, or so he said. He showered her with flattery and fine words. When it was reported to her that he’d said in private that "her word was as crooked as her carcass," it wounded her deeply. But it was to be the death of Catherine Howard, Countess of Nottingham, her closest companion, on 24 February, 1603, that plunged her into the deep depression from which she never recovered.
Elizabeth was aware that she was unwell and that it was serious. She did not believe her doctors when they told her the illness would pass and that she would soon be back to her old self. It seemed to some that her spirit had been broken. She now banned all talk of the Succession, though the Court whispers were that her Crown would soon pass to King James VI of Scotland, but the very fact that he was the son of her old nemesis Mary Queen of Scots was just too much for Elizabeth to bear and no one was allowed to even whisper of her possible passing - the subject was taboo. 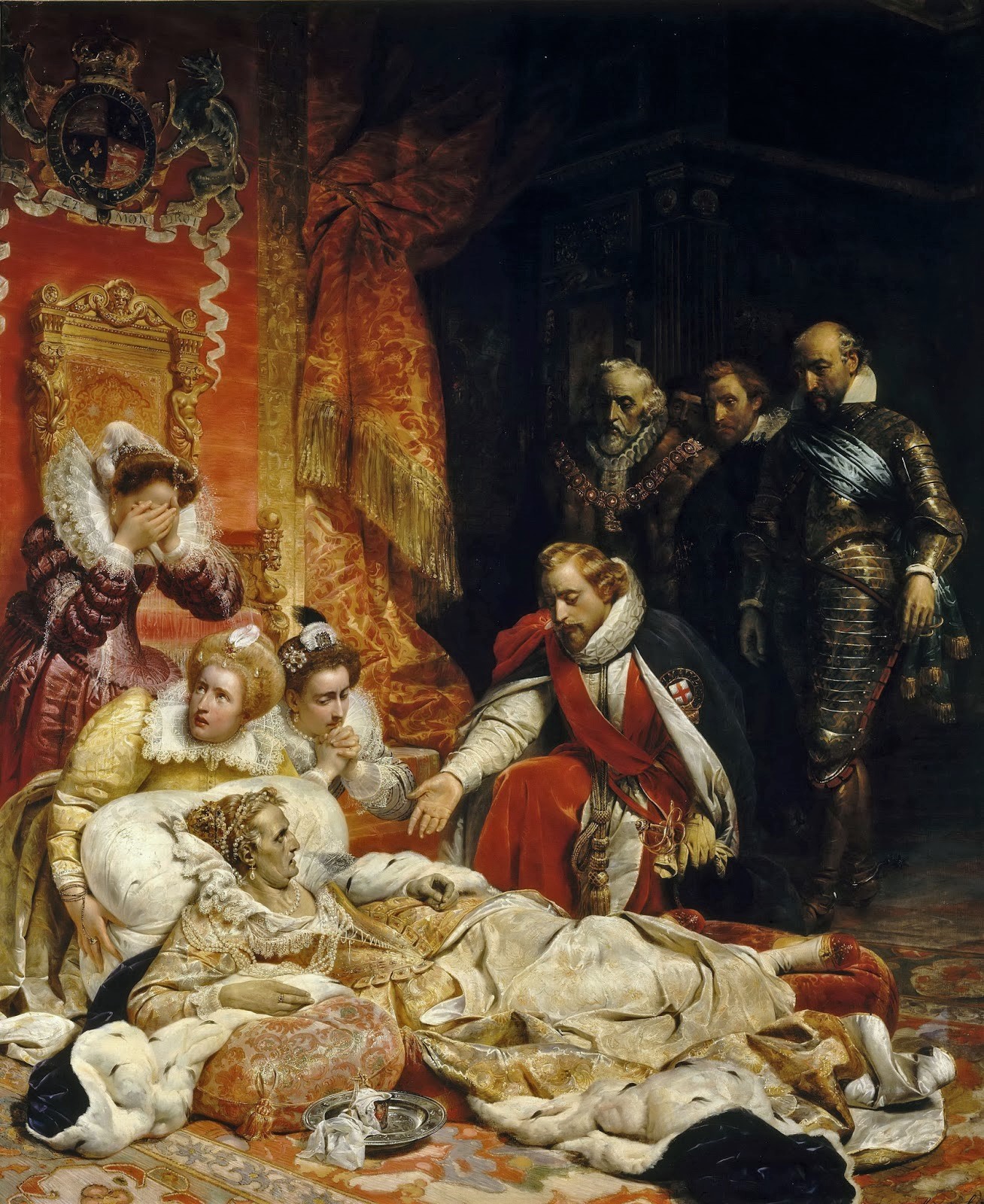 Elizabeth was ill with a constant fever and a swelling of the throat that made it difficult for her to speak but she would no longer permit her physicians to examine her. She wouldn't undress and she wouldn't go to bed. Indeed she refused to sleep at all fearing that if she did so she might never wake. Instead she would stand for hours on end in complete silence refusing to speak to anyone or answer any questions. Now and again she would slump in a chair or her ladies-in-waiting would place cushions on the floor for her to lie down on but her eyes never closed. She appeared to be lost in her thoughts but those attending her never doubted for a moment that she was aware of what was happening around her and listened to every word spoken - the Queen was dying, but she would not go willingly to her death.
Elizabeth’s mood had been sullen and morose ever since the death of Countess Nottingham and her Godson Sir John Harrington who had visited her the previous November remembered how she would stab the drapes in her bedchamber with a knife believing there to be conspirators and traitors lurking behind them and would speak of evil deeds being done behind her back. He described how she was plagued by self-doubt and endured recurring nightmares in particular she was haunted by her execution of Essex and Mary, Queen of Scots. In the case of the latter she was convinced that she had committed an offence against God.
One of her ladies of the bedchamber Elizabeth Southall describer her of being haunted by visions of her own decaying corpse and how later her body was so full of noxious vapours that it exploded in its coffin.
Elizabeth was indeed a frightful sight. She was gaunt and thin while the makeup that had become ever thicker and more elaborate she never appeared without. She had lost her hair and she wore a wig at all times, most of her teeth had gone and she had taken to holding a perfumed silk handkerchief to her mouth. But her physical decay had been made all the worse by the loss of that natural brio and love of life that had made her appear ever young to those who met her. This had been the case for many months, long before her final illness, and it was said that she had aged a great deal in a short time.
On 23 March, 1603, Elizabeth slumped into semi-consciousness. Now too weak to argue her attendants were at last able to put her to bed. As the hours passed her breathing became increasingly heavy, slow, and intermittent, and musicians were brought in to play soft music as various dignitaries gathered around her bed.
Archbishop Whitgift said prayers and some people quietly wept. Slowly Elizabeth fell into that deep sleep from which she would never wake. It was said that she died peacefully: “Mildly like a lamb, like a ripe apple plucked from a tree."

As Elizabeth breathed her last her people breathed a sigh of relief. Yet for all the trauma of the last decade of her reign and the dashed hopes and increased impoverishment of the country she was loved still and her funeral was a grand affair attended by more than a thousand official mourners as the city was draped in black and the Church bells tolled the doleful accompaniment to her death.
The people of London lined the streets to watch her funeral cortege pass by. As her body was laid to rest in Westminster Abbey people acknowledged that she had been unusual, that she’d had her foibles and her funny ways but she had kept the peace, kept England safe, but perhaps that she reigned had for too long.
The Succession went smoothly as Robert Cecil had worked so tirelessly to ensure but within just forty years of Elizabeth’s death England would be plunged into the devastating Civil War he had feared, a war that would see the King executed by his own Parliament and the Monarchy abolished, for a time at least.
Tagged as: Tudor & Stuart, Women
Share this post: