Life of a Roman Slave

Posted on 15th March 2021
Slavery was a fact of life in the Ancient World it was neither peculiar to Rome nor an indication of any particular brutality on its part but as Rome became an Empire and accumulated lands and peoples it embraced slavery on an unprecedented scale.
Indeed, it has been estimated that at the peak of its power one-in-four of the population of Rome itself were slaves and that the number in Italy as a whole was even higher. But like all Slave States before and since Rome lived in fear of its enemy within, and with good cause. Between 135 and 71 BC there were three major servile revolts the most serious of which led by the Thracian Gladiator Spartacus shook Rome to its very foundations.
Rome was an aggressive power constantly at war and with its well-trained, highly disciplined army invariably victorious taking a great many captives in the process this despite the fact that any General seeking a Triumph needed to provide at least 5,000 slain enemy.
Even so, the number of captives taken was expected to be high so much so that slave traders often accompanied the army on their campaigns. It was after all a lucrative business even if like any other commodity slaves were prey to market fluctuations and a particularly successful battle could often cause a glut on the market causing prices to slump accordingly.
It is said that following his conquest of Gaul, Julius Caesar sold more than 50,000 slaves to the many traders who flocked to his camp. 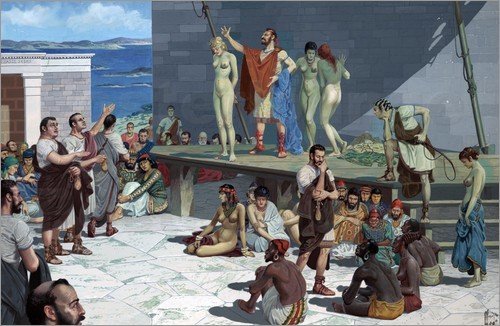 Slaves were at public auctions according to the highest bid with those possessed of an education or a specific skill particularly sought after. Captured warriors were considered dangerous and unsuitable for domestic service and so would be purchased to labour in the salt mines and the stone quarries where conditions were unremittingly harsh with beatings and executions commonplace. With life expectancy short Gladiatorial School might offer an escape from such purgatory for the stronger and more aggressive among them.
The life of a domestic slave was no less hard, if perhaps less obviously brutal and varied little in intensity whether they had a lenient master or not.
They were at their beck and call of their master or mistress every hour of every day and were expected to do everything for them – they bathed them, dressed them, cut their hair, prepared their food and nursed and educated their children. 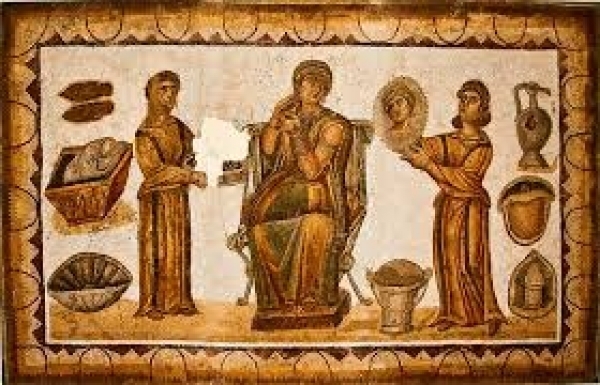 Slaves were never permitted to refer to their master or mistress by their name but would refer to them as Domina. Likewise they were not permitted to speak in their presence unless requested to do so and would often be forced to go barefoot as a sign of their subjection.
They would be housed in dormitories either situated on the upper floor of their master’s residence or in an attached building. If they worked in agriculture they would live in separate barracks.
Male and female slaves were not kept apart and it was common for them to marry and have families of their own though slave marriage had no status in law. Thus, a family could be broken up at any time if a master chose to sell a mother, father, or child.
They would be expected to eat when they could and their diet would be that of the poorest Roman – bread, water, pulses, olives, and salted fish. On occasion they might be permitted sour wine but it was not thought generally wise to permit slaves alcohol.
Those who worked in the kitchens invariably ate better than the other household slaves benefitting as they did from scraps from the table. Pilfering food from the kitchen however would not be tolerated and if caught the punishment was harsh with the miscreant often stripped naked and flogged in front of the rest of the slaves. Even at a time when a surplus of slaves made them relatively cheap to purchase they nonetheless remained expensive to maintain. They had to be clothed, housed, fed, trained and so it made little sense for a master to be cruel to or abuse his slaves even if many continued to do so.
In fact slave abuse had become so commonplace that the philosopher and future advisor to the Emperor Nero, Seneca complained:
“Slaves, who cannot talk before his master’s face, talk about him behind his back. It is this sort of treatment which makes people say – ‘you have as many enemies as you have slaves’. They are not our enemies when we get them; we make them so.”
Such was the brutality of some masters that there were times when the number of runaway slaves reached almost epidemic proportions and the rewards on offer for their capture and return became a lucrative business in its own right.
The punished meted out to a returned slave would inevitably confirm them in their reasons for absconding in the first place – a public whipping, the letter ‘F’ for Fugitive branded on their forehead or forced to carry out their duties in chains.
It was not unknown for women in captivity to murder their own babies rather than subject them to a live of servitude. Doing so was also a means by which they could avenge themselves on their master for a child born to a slave was a precious commodity that required no training and would naturally acclimatise to a life of hard work and blind obedience. The fear of being murdered in their beds by those who served them cast a threatening shadow over the slave owner so to have a slave as a child who could be moulded and would never know better was greatly cherished. The public dumps that littered the city always contained their share of new-borns and infant children.
Attractive female slaves and pretty young boys would be expected to satisfy the sexual needs of their master and mistress even though such relationships were frowned upon and if made public were the source of scandal and no little mockery; but for the most part they were tolerated as long as the master or mistress remained the dominant partner. This was particularly the case with regards to homosexual encounters where it was not considered decent for a Roman to be penetrated by a non-Roman though it remained commonplace.
Slaves had no rights, they could not own property and they had no recourse to the law. Even so, it was technically illegal for a master to kill his slave but denied representation in the Courts there was nothing to prevent it. However, being a slave was not necessarily a life sentence. A master could free a slave which he might do for reasons of gratitude for years of loyal and devoted service, but it was never done out of any sense that slavery might be wrong.
It was also possible for a slave to buy their freedom if their master permitted them to earn the money to do so. The price for freedom would usually be set at the slave’s current market value or their original price of purchase.
Once freed it was difficult but not impossible for an ex-slave to obtain full Roman citizenship. Elderly slaves no longer able to perform their duties would often be cast onto the streets to beg or die, a freedom of sorts but one neither sought after or desired.
It has been argued that the preponderance of slaves within the Roman Empire was pivotal to its eventual decline and that the virtues of hard work, discipline and service that had done so much to make Rome great were lost in a haze of indolent self-indulgence as even the poorest citizen was no longer required to work.
Tagged as: Ancient & Medieval
Share this post: