Posted on 1st August 2021
King Ludwig II is famous for creating the fairytale Bavaria of beautiful and imposing Castles we know today. He is also famous for being the only European Monarch to have been deposed having been judged insane by a panel of psychiatrists.
He was born on 25 August 1846, in the Nymphenburg Palace near Munich the eldest son of the future King Maximilian II and as such he would be Crown Prince. His education then as a future Monarch was conventional and rigorous and there was to be little time for play. Instead, he was forced to study ten hours a day, trained in royal protocol and put on a strict diet and regime of physical fitness. He was also estranged from his parents who took very little interest in his upbringing and he was placed in the hands of a series of nannies and often brutal and uncaring tutors. His only escape from the martinets who controlled his life were the summers he spent at the beautiful Medieval Castle of Hohenschwagen.
From an early age it was evident that Ludwig was an unusual child. He often carried a glazed expression, would spend a great deal of time on his own or with his imaginary friends and could often be found talking to no one in particular. Even his parents were concerned at his apparent flights of fancy.
It was not healthy for an heir to the throne to spend so much time in fantasising about who knows what. Yet they remained uninterested in spending more time with their child instead demanding that his tutors knock it out of him. When they suggested to his father that it would be good for his son to join him on his daily walk, he replied: "But what am I to say to him? After all, my son pays no attention to what others tell him".
Indeed, so distant would Ludwig become from his parents that he would later refer to his mother as, “my predecessors consort". 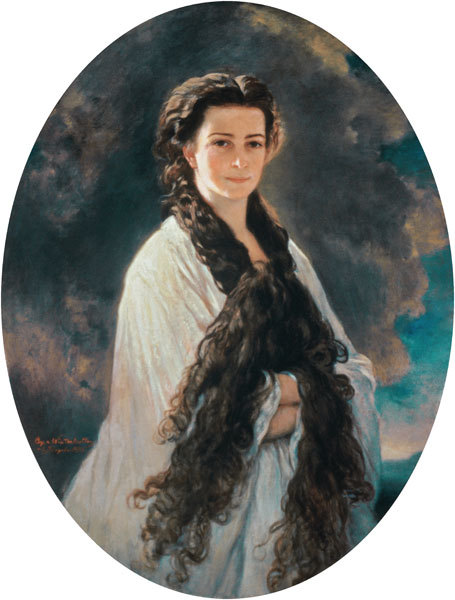 His best friend as he grew up was the young Duchess Elisabeth, the future Empress of Austria and with her he was able to live out the world of his imagination. Together they recited poetry, learned to dance and would re-stage scenes from the great operas.
There was no physical attraction between them however, at least not on Ludwig's part, he was to struggle all his life to reconcile his homosexuality with his Catholic faith. Even so, they were devoted to one another. She was his dove and he her eagle.
Crown Prince Ludwig was just eighteen years of age when his father died and he succeeded to the Throne. 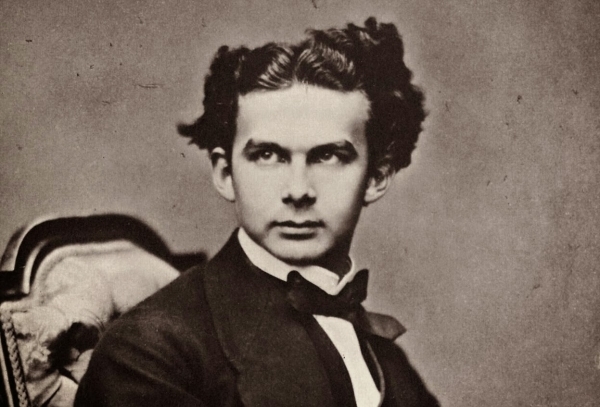 At his Coronation people were struck at how handsome he was, almost pretty in fact, with dark wavy hair and blazing blue eyes. He looked every bit the dashing young Monarch and his people were confident that his reign would herald a new era of prosperity for the Kingdom. But from the outset of his reign Ludwig came under pressure to produce an heir.
In January 1867, his engagement to the Duchess Sophie was announced but he soon made it plain that he "would rather drown himself than marry" and not long after the engagement was broken off.
By now most of his closest associates were men and it wasn't difficult to see where his sexual proclivities lay. He also hated the responsibility that came with being King and he drove his Ministers to distraction with his refusal to perform his royal duties or take an interest in politics. Instead, one of the first things he did upon becoming King was to invite the composer Richard Wagner to stay. He had always loved Wagner and his music was the perfect accompaniment to his fantasies. His Ministers were however were less than pleased, at the time Wagner was considered to be a dangerous radical but he was to remain in Bavaria for the next eighteen months nonetheless.

During the crisis of his engagement Ludwig wrote to the composer expressing his desire to marry him but the proposal was with all decorum understandably declined. Regardless of his eccentricities Wagner remained impressed by the young King. He wrote: "Alas, he is so handsome and wise, soulful and lovely, that I fear that his life must melt away in this vulgar world like a fleeting dream of the Gods".
In 1866, Ludwig had made the mistake of pledging his support to Austria in their war against Prussia and after Prussia's victory he came under intense pressure to agree to the formation of a single unified German State. When in 1871, Prussia defeated France, this time with Bavaria as an ally the pressure was such that he was forced to reluctantly agree.
Bavaria was now subsumed as part of the Second Reich but despite its Special Status within the Reich, Ludwig was less than pleased to see his Kingdom reduced to a Prussian Client State. In the end the decision had been made for him by his Ministers but he let his displeasure be known by refusing to attend the Coronation of Kaiser Wilhelm I.
Following the formation of the German State, Ludwig effectively withdrew from politics altogether and his decision to reign, rather than rule only seemed to bring his eccentricities into clearer focus and the gossips had a field day.
He refused to meet with Ministers, attend the Royal Court or preside at public functions and in the last ten years of his reign he did not hold a single State Banquet. Instead he disappeared into a fantasy world all of his own where he loved to do nothing more than create make believe in the real world and build castles of impossible beauty. 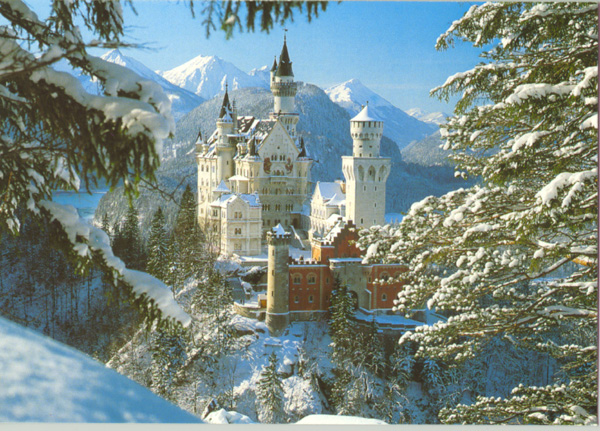 Ludwig travelled abroad to get ideas for his castle building projects and when back in Bavaria he preferred to tour the countryside and enjoy the hospitality of ordinary folk than the formalities of life at the Imperial Court.
Always generous with money he would lavish gifts on those who had been kind to him.
The projects he embarked upon were all his own. He chose the locations, trawled architects drawings, chose the decorations and approved the furnishings. Neither did he spend State Funds on his projects though he did plunder the Welfensfonds, the money with which Prussia had bribed Bavaria for its compliance. This was as far as Ludwig was concerned dirty money which he would cleanse it by using it in the cause of beauty. tHe also squandered much of the Wittelsbach family fortune. 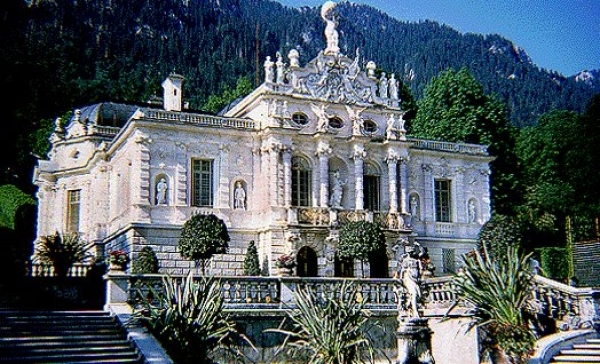 Among some of the more significant castles he built were the Schloss Neuschwanstein, Schloss Linderhof, and the Herrenchiemsee. He also built the Fiestpielhaus in Bayreuth for the production and performance of Wagner's Operas.
By 1885, the King was 14 million marks in debt and was busy trawling the Financial Houses of Europe looking for even more funds. His Ministers wanted rid of this useless and wasteful King and his increasingly erratic behaviour was to provide them with the excuse for doing so.
As he had got older he became ever more prone to violent rages and described as behaving like a petulant child who it was rumoured would regularly beat his servants. He would refuse to permit women into his presence and in the summer months he would amuse himself by holding midnight picnics during which his male grooms would dance naked for his entertainment.
When Ludwig learned that his Ministers were intending to move against him he decided to act, but it was too late. In June 1886, a report signed by four prominent psychiatrists was published accusing Ludwig of suffering from acute paranoia and declaring him insane and unfit to rule.
At 4.00am on 10 June 1886, a Commission led by Dr Bernhard von Gudden, one of the signatories of the report, arrived at Neuschwanstein Castle with a warrant for Ludwig's arrest and deposition. It stated: "His Majesty has been declared paranoid and suffering from such a disorder freedom of action can no longer be tolerated and, therefore, Your Majesty is declared no longer capable of ruling for the length of Your Majesty's life".
Ludwig ordered the local police to protect him and for a time the Commissioners were placed under arrest. Ludwig's friends now suggested that he flee whilst he still had the chance but he instead decided to release a statement imploring the Bavarian people to rally to his defence but the Authorities were able to suppress this before it could be idely distributed.
Having failed to rally the people Ludwig now ordered the release of the Commissioners and placed himself in their custody. Upon doing so he asked them: "How can you declare me insane when you have never even met me, or examined me?" It was a reasonable question, but no answer was forthcoming.
He was held captive at Castle Berg on the banks of Lake Starnberg where on 13 June, Ludwig suggested that Dr Gudden accompany him on his morning walk. It was a lovely day, the sun was shining and so the doctor readily agreed. It was a walk from which neither of them would return.
There is no definitive report of what happened next but it would appear both were murdered.
According to the journal of Ludwig's personal fisherman Jacob Lidl, a boat had been provided by Ludwig's friends to whisk him across the lake but as he got into it and began to row a shot rang out from the shore and he was killed. Dr Gudden's body was later discovered in waist deep water with his skull crushed in.
Did Ludwig murder the doctor? Before he died Lidl admitted that he had been intimidated into never speaking the truth about what he had witnessed.
Was Ludwig truly insane or just a self-indulgent fantasist? That we can never know for sure but at the age of just 39 the Fairytale King of Bavaria was dead but he left behind a legacy that can be seen and enjoyed by all those who visit his Wagnerian Playground of the Gods.
Tagged as: Miscellaneous
Share this post: