Posted on 8th January 2021
By the Fifth Century the once mighty Roman Empire was in irreversible decline. Hounded by nomadic tribes such as the Visigoths and the Ostrogoths from the East and the Germanic tribes of the West they would soon face an even greater enemy, a race of warrior tribesmen from the plains of modern Hungary, the Huns, and their fearsome leader, Attila, the Scourge of God.
The Roman historian Ammanianus Marcelinus described them:
Though they do just bear the likeness of men, of a very ugly type, they are so little advanced in civilization that they make no use of fire or use any kind of relish in the preparation of their food, instead they feed upon the roots they find in the fields, and the half-raw flesh of any sort of animal. When attacked, they will sometimes engage in regular battle going into the fight in order of columns and filling the air with varied and discordant cries. More often however they fight in no regular order of battle, but by being extremely swift and sudden in their movements, they disperse, and then rapidly come together again in loose array, spread havoc over vast plains, and flying over the rampart, they pillage the camp of their enemy almost before he has become aware of their approach.
When in close combat they fight with swords without regard for their own safety, and while their enemy is intent upon parrying the thrust of the swords, they throw a net over him and so entangle his limbs. 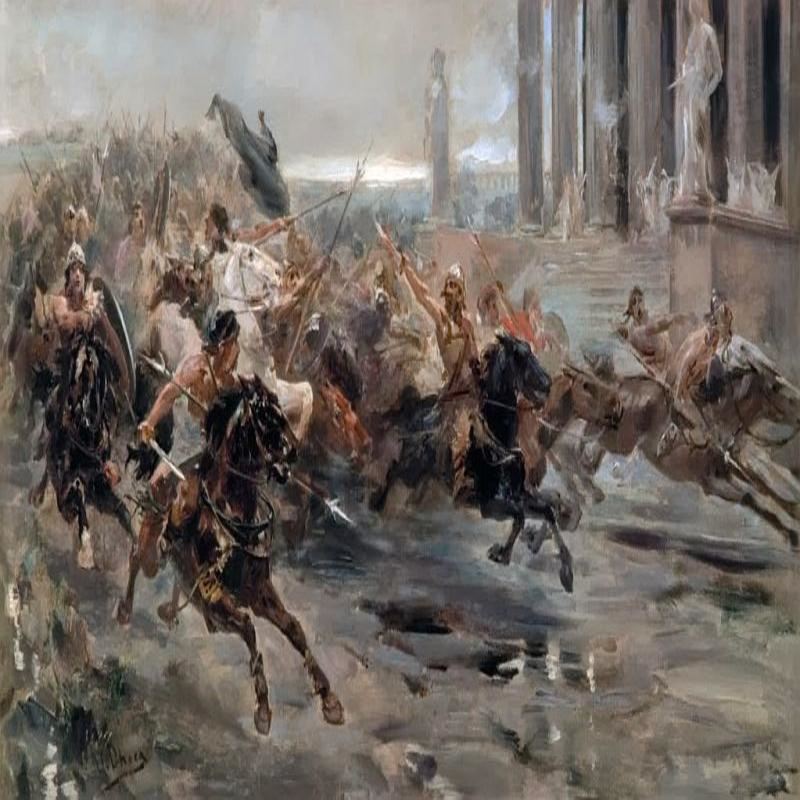 In 451, Attila led his hordes into the heart of Western Europe but was defeated by Rome and its Ostrogoth Allies at the Battle of Chalons, now considered one of the great turning points of history. But for Attila it was merely a setback and he would return the following year to rampage across Italy looting and pillaging at will. Yet he turned back at the Gates of Rome when the city appeared to be at his mercy. Why, remains a mystery.
A man of fierce demeanour who struck terror into the hearts of those brought before him, Attila was someone whom it was wise not to offend.

Priscus, an envoy of the Byzantine Empire was invited to dine with the Scourge of God. This is his account:
We waited for the time of the invitation, and then all of us, the envoys from the Western Romans as well, presented ourselves in the doorway facing Attila. In accordance with national custom we were given a cup for us to make our libations before we took our seats. When that had been done we went to the chairs where we would sit to have dinner. All the seats were ranged down either side of the room, up against the walls. In the middle Attila was sitting on a couch with a second couch behind him. Behind that a few steps led up to his bed, which for decorative purposes was covered in ornate drapes made of fine linen, like those which Greeks and Romans prepare for marriage ceremonies.
The more distinguished guests were on Attila's right and the second rank on his left where we were along with Berichos, a man of some renown among the Scythians who was sitting in front of us. To the right of Attila’s couch was Onegesios, and opposite him were two of the king's sons on chairs. The eldest son was sitting on Attila's own couch, right on the very edge, with his eyes fixed on the ground in fear of his father.
When all were sitting properly in order, a cupbearer came to offer Attila an ivy-wood bowl of wine, which he took and drank a toast to the man first in order of precedence. The man thus honoured rose to his feet but it was not right for him to sit down again until Attila had drank some or all of the wine and had handed the goblet back to the attendant. The guests, taking their own cups, then honoured him in the same way, sipping the wine after making the toast.
One attendant went round to each man in strict order after Attila's personal cup-bearer had gone out.
When the second guest and then all the others in their turn had been so honoured, Attila greeted us in like fashion in our order of seating. A lavish meal, served on silver trenchers, was prepared for us and the others, but Attila just had some meat on a wooden platter, for this was one aspect of his self-discipline. For instance, gold or silver cups were presented to the other diners, but his own goblet was made of wood. His clothes, too, were simple, and no trouble was taken except to have them clean. The sword that hung by his side, the clasps of his barbarian shoes and the bridle of his horse were all free from gold, precious stones or other valuable decorations.
As twilight came on torches were lit, and two barbarians entered before Attila to sing some songs they had composed, telling of his victories and his valour in war. The guests paid close attention to them, and some were delighted with the songs, others excited at being reminded of the wars, but others broke down and wept if their bodies were weakened by age and their warrior spirits forced to remain inactive.
After the songs, a Scythian entered, a crazy fellow who told a lot of strange and completely false stories, not a word of them true which made everyone laugh. Following him the moor, Zerkon, totally disorganized in appearance in clothes, voice and words who by mixing up the languages of the Italians with those of the Huns and Goths, he fascinated everyone and made them break out into uncontrollable laughter. All that is except Attila, he remained impassive, without any change of expression, and neither by word or gesture did he seem to share in the merriment except that when his youngest son, Ernas, came in and stood by him, he drew the boy towards him and looked at him with gentle eyes.
I was surprised that he paid such attention. After spending most of the night at the party, we left, having no wish to pursue the drinking any further.
.
Tagged as: Fact File
Share this post: