Mystery of the Marie Celeste

Posted on 5th August 2021
The discovery of the brig Marie Celeste found abandoned but apparently undisturbed in mid-Atlantic on 4 December 1872 remains one of the great maritime mysteries. Even her name has been the cause of confusion and she was in fact the Mary Celeste with the name Marie Celeste popularised in a fictional account of the events by the author of Sherlock Holmes, Sir Arthur Conan Doyle.
When the Mary Celeste was discovered she was still under full-sail and heading in the direction of the Straits of Gibraltar. She was unmanned and seemed to have been abandoned in haste and without apparent cause.
The ship that discovered her, the Dei Gratia, was under the command of Captain David Morehouse an old friend of the Mary Celeste’s Captain Benjamin Briggs and they had dined together just days before the Mary Celeste had set sail.
The Mary Celeste had left Staten Island in New York bound for Genoa in Italy on 5 November, ten days before the Dei Gratia. She was carrying a cargo of 1,701 barrels of commercial alcohol valued at $35,000, and was insured for around $46,000. 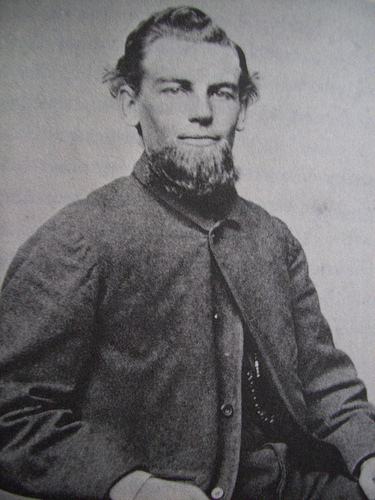 The 37 year old Benjamin Briggs who had spent most of his working life at sea and had held his Master Mariners Licence for more than ten years was also part-owner of the vessel. He was a devoted family man, deeply religious and rarely drank. He had a reputation as a responsible seaman and skipper who was liked by those who served under him.
He had recently had his cabin aboard the Mary Celeste modified to include his wife Sarah and their two year old daughter Sophie, who would accompany him on the voyage. The crew had been hired, as was normal practice, just days before the ship was due to set sail but they were all experienced mariners of good reputation.
The crew of the Dei Gratia could see that there was something not quite right about the Mary Celeste. She was travelling fast but was veering out of control. Some of her sails appeared to be holed and torn and no crew could be observed on board.
The Dei Gratia followed the Mary Celeste for about two hours when, with the wind having dropped, Captain Morehouse ordered his First Mate Oliver Deveau, to board her.
Deveau reported back that there was no sign of life aboard and that the ship was thoroughly wet-through and there was three feet of water in the hold. Also, only one of the ships three pumps was working. 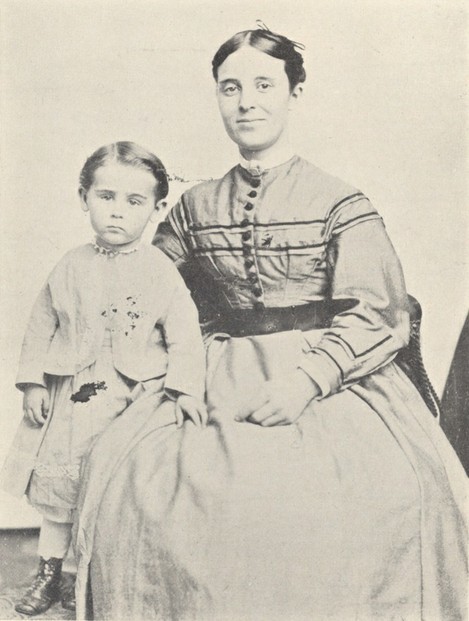 However, she was still seaworthy and under no threat of sinking. Why then was she abandoned and would Briggs seriously imperil the life of his wife and child by taking to an open boat in mid-Atlantic without very good cause?
The ships living quarters appeared to be in reasonable good order but all of the ships papers except for the Captain’s log were missing. The ships clock was not working and its compass had been broken. Its lifeboat was also not aboard and a tow rope could be seen trailing in the sea from the stern of the ship.
A check of the cargo found that 9 barrels of alcohol had been opened and were empty. There were few indications however that life on board had not been carrying on as normal. The ship was not flying a distress signal and she appeared to have been abandoned in a hurry. 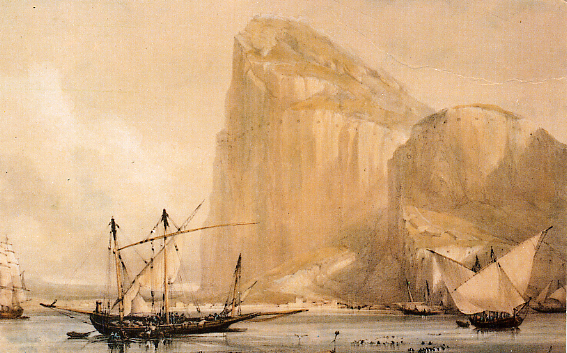 The Dei Gratia towed the Mary Celeste to Gibraltar where it was inspected by the ports Surveyor of Shipping, John Austin. He discovered blood stains in the Captain’s cabin and a knife and unsheathed cutlass. There was also a deep gash on the ships railing that appeared to have been made in the recent past, probably by an axe.
So what could have caused the abandonment of the Mary Celeste in such haste? Piracy was at first suspected and Barbary Pirates were still active in the area, though less so than in the past due to the activities of the Royal Navy. But the fact that the cargo had remained virtually untouched and the crews valuables remained on board seemed to mitigate, against the involvement of pirates.
It is possible that the Mary Celeste had run into a storm and had begun taking on water. She was, after all discovered waterlogged. But no storms were reported by other ships in the area and Benjamin Briggs had encountered storms before and was too experienced a Captain to panic. He would also have known that he would have had a greater chance of survival remaining on board the Mary Celeste than he would on storm tossed seas in an open boat. 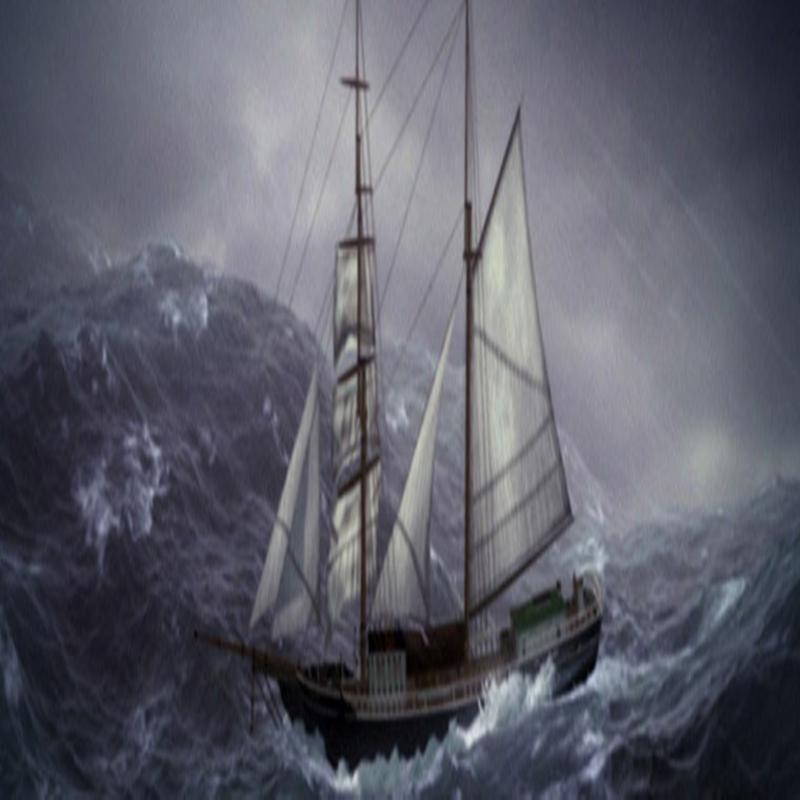 Could she have been hit by a tsunami or a rogue wave that swept everybody overboard? This is possible, rogue waves are not unknown in that region of the Atlantic but this would have meant that Captain Briggs, his wife and child, and all seven crew members would have had to have been on deck at the same time. It also does not explain the missing lifeboat or the fact that everything else on deck was not swept away with them.
Might there have been an earthquake at sea, known as a seaquake, that perhaps jarred open the nine barrels of alcohol and dislodged the ships stove provoking burning embers to rise up which caused the damage to the sails. Fearing that the cargo was about to ignite and set the ship ablaze did Briggs order its hasty abandonment? But then there were no reports of seismic activity in the area.
It was not impossible that the Mary Celeste might have encountered a waterspout. Much like a tornado this would have sucked the water immediately surrounding the ship upwards giving it the appearance that it was sinking. This would explain why it had been discovered waterlogged, but then again Captain Briggs was known to be aware of such phenomena.
Could Captain Briggs and his family have been the victims of a mutiny?
It is possible that the empty barrels of alcohol had been opened and consumed without the Captain’s permission and that in a drunken orgy of violence they had been murdered and their bodies thrown overboard. This would explain the bloodstains in the Captain’s cabin and the discovery of weaponry. But then having disposed of the Captain and his family why then abandon such a valuable cargo and take to the sea in an open boat?
Also, the ship’s crew were known to have been of good character and Captain Briggs was far from a martinet. There were also few signs of a fight having ensued.
Or was it all part of an attempted insurance fraud that went disastrously wrong. Captain Briggs had spoken often of his weariness of life at sea and how he wished he could retire. He had earlier discussed going into business with friends and had tried to purchase a store with his brother but they were unable to raise the money.
However, he was only a minority shareholder in the ship and his profit from any insurance claim would only have been marginal.
Another possibility is that Captain Briggs feared an explosion. He had never carried a cargo as volatile as alcohol before and he had expressed his concerns before setting sail.
The opened barrels of alcohol had caused a build up of vapours in the hold and with his wife and young child aboard he may have decided to abandon the ship, at least temporarily as a precaution, attaching the lifeboat to the stern of the ship by a tow-rope so they could travel some distance from the ship until the danger had passed.
The tow-rope had then snapped abandoning them at sea where they either died of exposure, thirst, or drowned. However, when the ship was boarded the main hatch was found still secured and there was no report of foul-smelling vapours which should by this time have been overwhelming.
This theory might explain the missing lifeboat and snapped tow-rope but it does not explain the lack of vapours, the fact that the ship was waterlogged, the missing papers, or the bloodstains in the Captain’s cabin.
The reason for the Mary Celeste’s abandonment has never been adequately explained and it remains one of the world’s most enduring mysteries.
Following the investigation the Mary Celeste was sailed back to America and sold, having been designated an unlucky ship. Indeed, it was to change hands 17 times in 13 years.
Eventually, on 3 January 1885 it was wrecked off the coast of Haiti in a deliberate insurance fraud. Lost in the wreckage was the Captain’s Log.
Though it didn’t appear to indicate that there was anything wrong with the ship to contemporaries its evidence was lost forever.
Tagged as: Miscellaneous
Share this post: