Posted on 26th October 2021
Defeat at the Battle of Leipzig in October 1813, marked the beginning of the end for Napoleon Bonaparte yet despite the overwhelming odds now stacked against him he refused peace overtures determined instead to fight on in the hope that he could yet emerge victorious. But it was to prove a forlorn hope as unable to rally the French people sufficiently and receiving only a lacklustre response from his Marshals he was made to face reality abdicating his throne six months later on 14 April 1814.
The Allied powers were surprisingly generous in victory exiling him to the Island of Elba in the Mediterranean with the power to govern as he pleased. They were to find their generosity misplaced when in the spring of 1815 he landed on mainland France at the head of an army and marched on Paris gathering support as he went. The unpopular Bourbon King Louis XVIII fled and Napoleon found himself once more the head of government. What followed was the so-called One Hundred Days culminating in his defeat at the Battle of Waterloo. Soon after having said farewell to his Imperial Guard he fled Paris for the last time. 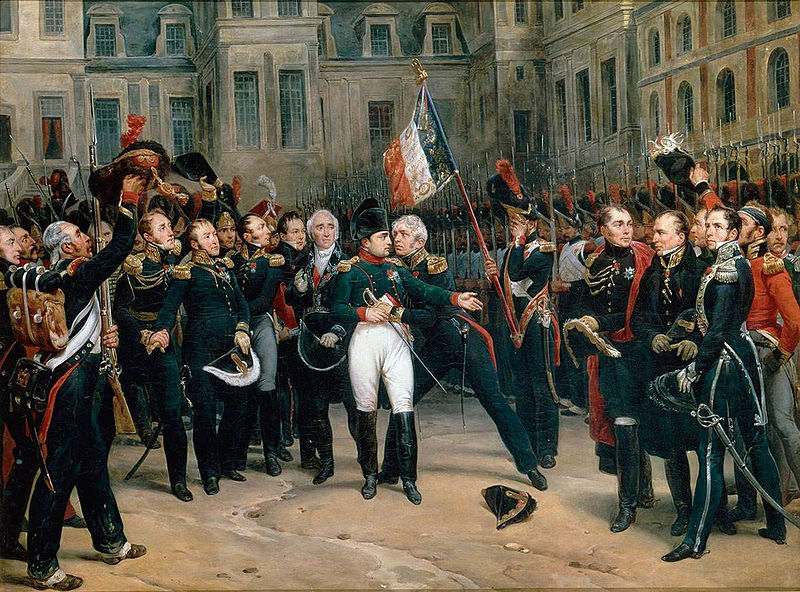 Aware there were those among the Allies who this time wished to see him executed and fearing for his life he wrote with some urgency to English King George IV:
“Your Royal Highness, A victim to the factions which distract my country, and to the enmity of the greatest powers of Europe I have terminated my political career, and I come, like Themistocles, to throw myself on the hospitality of the British people. I put myself under the protection of their laws; which I claim from your Royal Highness, as the most powerful, the most constant, and the most generous of my enemies.”
Having surrendered himself to the Captain of H.M.S Bellerophon moored in Rochefort Harbour and thrown himself upon the mercy of the British his life was indeed spared but his exile this time would be as a prisoner not an ex-Emperor or ruler demanding of respect. Instead, instead he was transported the Island of St Helena, a barren, windswept outcrop in the South Atlantic far from the European Continent and impossible to flee. Among the small entourage that accompanied him was Emanuel Dieudonne, the Comte de Las Cases who maintained a diary of events and would later write a memoir of his time with the Emperor. These are some extracts:
August 10
This day we cleared the Channel. We had now entered upon the dreary unknown course to which fate had doomed us. Again my agonies were renewed; again the dear connections I had abandoned resumed their sway over my heart… Meanwhile we advanced in our course and were soon to be out of Europe. Thus, in less than six weeks, had the emperor abdicated his throne and placed himself in the hands of the English, who were now hurrying him to a barren rock in the midst of a vast ocean. This is certainly no ordinary instance of the chances of fortune, and no common trial of firmness of mind.
October 23-24
The Emperor Napoleon, who lately possessed such boundless power and disposed of so many crowns, now occupies a wretched hovel, a few feet square, which is perched upon a rock, unprovided with furniture, and without either shutters or curtains to the windows. This place must serve him for bedchamber, dressing room, dining room, study, and sitting room; and he is obliged to go out when it is necessary to have this one apartment cleaned. His meals, consisting of a few wretched dishes, are brought to him from a distance, as though he were a criminal in a dungeon. He is absolutely in want of the necessaries of life: the bread and wine are not only not such as he has been accustomed to, but are so bad that we loathe to touch them; water, coffee, butter, oil, and other articles are either not to be procured or are scarcely fit for use…
We were all assembled around the Emperor, and he was recapitulating these facts with warmth: 'For what infamous treatment are we reserved!' he exclaimed. This is the anguish of death. To injustice and violence they now add insult and protracted torment. If I were so hateful to them, why did they not get rid of me? A few musket balls in my heart or my head would have done the business, and there would at least have been some energy in the crime. Were it not for you, and above all for your wives, I would receive nothing from them but the pay of a private soldier. How can the monarchs of Europe permit the sacred character of sovereignty to be violated in my person? Do they not see that they are, with their own hands, working their own destruction at St. Helena?'
'I entered their capitals victorious and, had I cherished such sentiments, what would have become of them? They styled me their brother, and I had become so by the choice of the people, the sanction of victory, the character of religion, and the alliances of their policy and their blood. Do they imagine that the good sense of nations is blind to their conduct? And what do they expect from it? At all events, make your complaints, gentlemen; let indignant Europe hear them. Complaints from me would be beneath my dignity and character; I must either command or be silent.'"
Tagged as: Fact File
Share this post: