Posted on 19th February 2021
Like all slave societies the antebellum South lived in constant fear of the captives in their midst, the dread of rebellion and of being murdered in their beds. For the most part these fears went unrealised, the brutal oppression of the slave-owning class ensured that, but on 21 August 1831 their deepest nightmares came true at last.
Nathaniel Turner had never seen Africa rather he had been born into slavery on 11 October 1800 and was to live his entire life in Southampton County, Virginia. He did run away from time to time but never with any real intention of escaping captivity. He would simply hide out in the woods for a few days before always returning of his own volition. He just needed some time to himself because, he said, he was a dreamer and because he had visions.
But Nathaniel, or Nat as he was known, was property. The name Turner merely signified whom he belonged to and in his case it was Samuel Turner, a prosperous local merchant who owned a number of slaves. 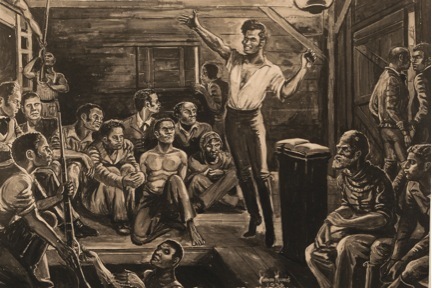 Despite having had no formal education, Nat was considered an intelligent and thoughtful man. He had taught himself to read and write and he was known to be deeply religious. Indeed, he regularly held Bible classes for the other slaves and was a respected preacher who was referred to locally as The Prophet. He was a charismatic figure widely admired and not just among his fellow Negroes, and as such he was granted more freedom than would have been usual for a slave.
The best description of Nat we have is from a reward notice for his capture issued in August 1831. He was, “5 feet 6 or 8 inches tall, weighs between 150 and 160 pounds, rather bright (light colored) complexion, but not a mulatto, broad shoulders, larger flat nose, large eyes, broad flat feet, rather knockneed, walks brisk and active, hair on head thin, no beard except on upper lip and top of the chin, a scar on one of his temples, also one on the back of his neck, a large knot on one of the bones of his right arm, near the wrist produced by a blow.”
Nat increasingly believed himself to be the instrument of God – I was ordained, he said, for some great purpose in the hands of the Almighty. Convinced that he was in direct communication with God he relayed his visions to his flock and they in turn were held in rapture: “The Spirit instantly appeared to me and said the Serpent was loosed, and Christ had lain down the yoke he had borne for the sins of men and I should take it on and fight against the Serpent.”
He would indeed strike back against the Serpent but first he needed a sign from Heaven, for he was not just a religious man but also a deeply superstitious one. Atmospheric conditions had always driven his decisions and so they would determine the timing of his rebellion: “I saw lights in the sky and would pray to know what they meant, and my prayers would be answered by a sign from God.”
And so he waited for his sign from God.

On 12 February 1831 a solar eclipse occurred in the skies over Virginia. Nat saw it as a large black hand blotting out the sun and he began to prepare for insurrection. He gathered a small band of devoted followers but then he changed his mind. It must be the 4 July, the white man’s holiday, he said. But again he hesitated, he needed further confirmation. On 13 August there was yet another solar eclipse and this was all the confirmation he required. He preached to his flock: “Drops of blood lay on the corn as though it were dew from Heaven.”
Earlier that month Nat had been sold to Joseph Travis, a harsh master who unlike Samuel Turner did not take kindly to Nat’s other activities and was not willing to turn a blind eye to them. It made Nat an angry man and his visions and prophecies became ever more violent and apocalyptic. He was later to deny this had ever been the case and that Joseph Travis “was a kind master who placed the greatest confidence in me.” 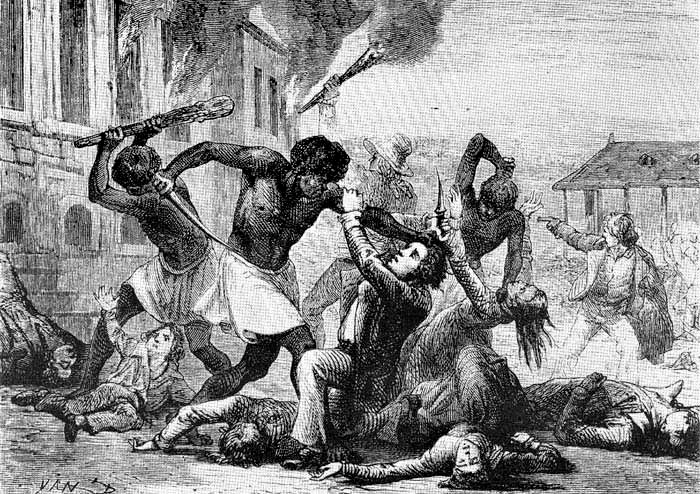 Having armed his followers with axes, knives, and broadswords on the night of 21 August 1831, he ordered them to go from home to home and kill as many white people as they could find but he had made no plans for what would transpire after the rebellion, no escape routes for the freed slaves had been mapped out, no hiding places found, and it appears that his motive was purely one of vengeance not of freedom. As his followers went from home to home butchering the occupants few slaves joined the insurrection or tried to flee the plantation. They were either too subservient, too scared or were simply appalled at what was being done. As such, the slaves in rebellion never numbered more than 70.
Just forty eight hours after it had begun Turner’s murder spree was over and 55 white people mostly women and children had been slaughtered. His first victims had been Joseph Travis and his family.
Highly sensitive to any sign of slave unrest reports of the insurrection soon spread and were alarmist in the extreme – rebellion widespread, terrible massacres, entire towns under siege. The Virginia State Militia was quickly mobilised, some 3,000 men armed with artillery but they were to meet little resistance and the renegade slaves were quickly rounded up. Not that this did much to prevent harsh reprisals with many of those captured being killed on the spot and decapitated their heads placed on poles and hung from trees as a warning to others. 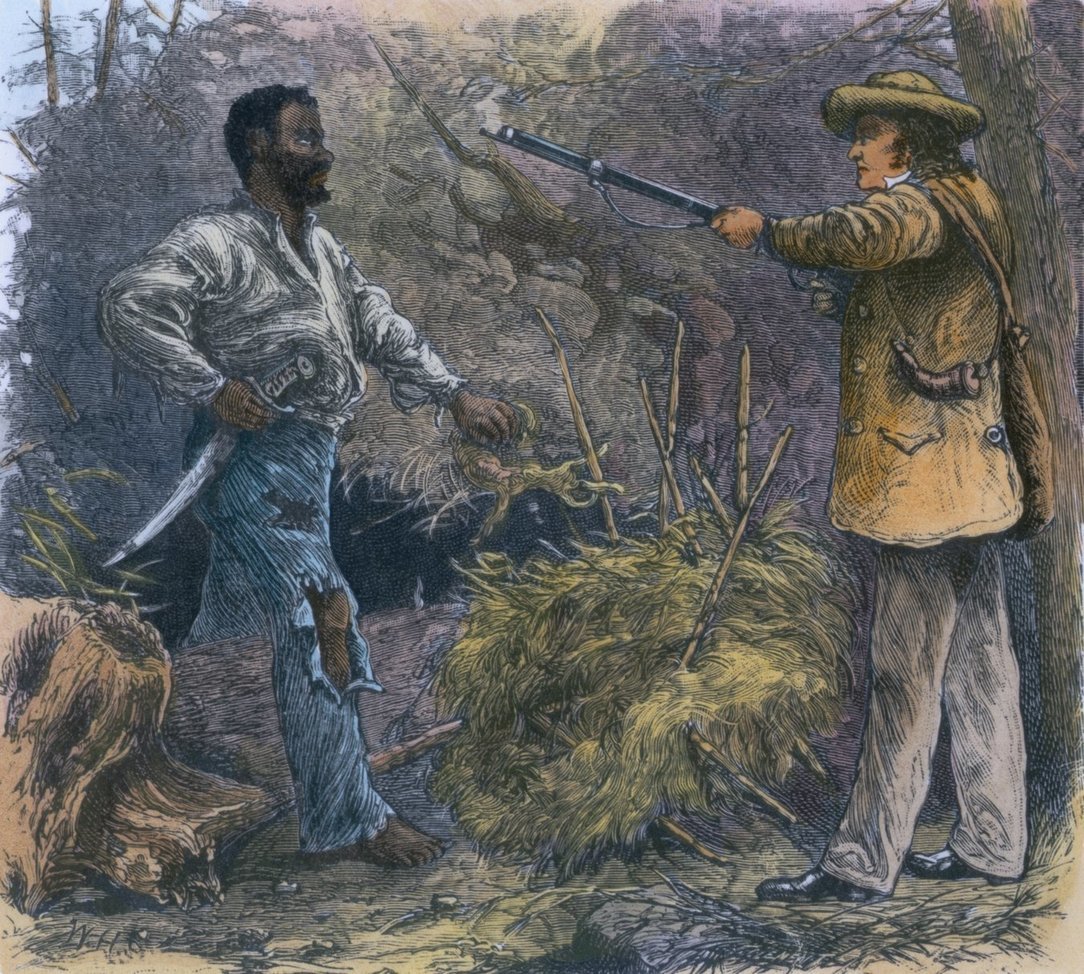 Nat Turner himself went on the run and wasn’t captured until 30 October when he was found by chance hiding in a hole. He did not resist arrest or try to run away and appeared almost relieved that it was all over.
Later when questioned he was adamant that he had meant to spare the women and children but had lost control of the situation. He had, he said, by-passed the homes of the poorer whites “because they thought no better of themselves than they did Negroes.”
His trial was a foregone conclusion and found guilty on charges of murder and inciting slave insurrection he was hanged on 11 November in the aptly named town of Jerusalem. His body was left to hang for some time before it was cut down, beheaded, flayed, and quartered. A further 60 slaves were hanged as a result of the insurrection and hundreds more were attacked, beaten, and murdered as vengeful white mobs went on the rampage.
Nat Turner’s revolt was only one of many in the Southern States but it was by far the most serious. But it had also occurred at a time when the so-called Peculiar Institution of Slavery was itself being questioned not just on moral but on economic grounds. The labour intensive nature of cotton production was being seen as increasingly unprofitable and as more and more farms and plantations were being abandoned there was a surplus of slaves that no one quite knew what to do with; but they could not be freed for Nat Turner’s revolt had confirmed them in their worst fears that should they ever get the opportunity they would turn violently upon their former masters.
But technological advances were to make the harvesting of cotton profitable once more and slavery was saved from dying the natural death that had seemed likely. Abolitionist attempts to curtail the further spread of slavery were now violently opposed it being said that the emancipation of the black man could only result in the enslavement of the white.
Abolitionists threatened the Southern way of life and cared little that were the slaves freed their women would be raped and their children murdered, hadn’t Nat Turner proved this?
Following the rebellion the life of the slaves became ever harsher. The liberties of freed slaves were curtailed and the Militia System throughout the Southern States was revived, something that was to prove invaluable in the coming Civil War. The State of Virginia now also passed a Statute that forbade anyone from even debating the rights and wrongs of slavery.
Nat Turner’s rebellion had made the Slave States more aware than ever of their vulnerability, almost to the point of paranoia. When in 1859 the abolitionist John Brown attempted to arm the slaves and incite slave insurrection it was again evidence that those who opposed slavery wished not just to free the slaves but murder those who owned them.
The South felt not only was their way of life threatened but their very existence and just thirty years after Nat Turner’s Insurrection they were to show that they were willing to fight to protect an institution that few had a stake but everyone shared.
Tagged as: Miscellaneous
Share this post: