Posted on 23rd August 2021
He is barely remembered now even in radical circles and perhaps only mentioned in passing but Nestor Ivanovich Makhno, the poor peasant from Ukraine, established one of the few anarchist entities in history, maybe it’s only state. It was forged in war, had little formal structure as one might expect, was recognised by no one, flickered only briefly, and much like the anarchist collectives formed in Catalonia and Aragon during the Spanish Civil War it had little time in which to succeed or fail before it succumbed to the weight of its enemies and was crushed by force.
He was born on 28 October 1888 the youngest of five children in the south-eastern Ukrainian village of Hulyai Pole to parents who like most in that region of the Russian Empire struggled to make a living. Indeed, it was a life of poverty, of often grinding poverty, and the young Nestor was forced to work from the age of seven often as a shepherd boy on one or other of the large estates that dotted the landscape. 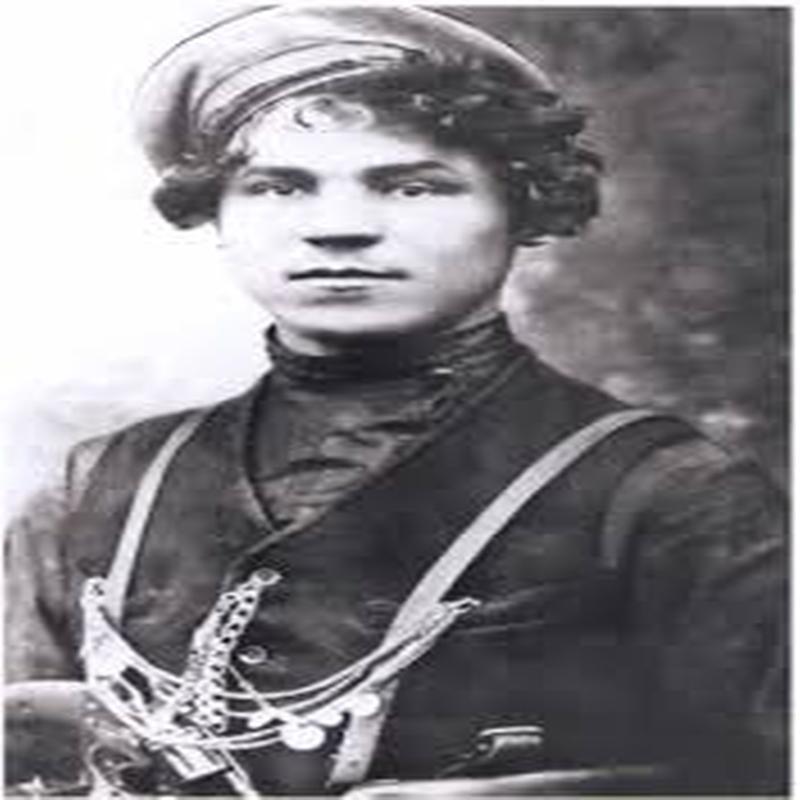 Toiling long days in the fields left him little time for play or to attend school making him resentful of those he blamed for his own and his family’s plight, the Kulaks, or wealthy landowners who he believed leeched off the poor and treated them cruelly. He knew this because he had witnessed it for himself, he had seen peasants arbitrarily beaten and being badly injured at work for which they received no recompense. He had seen how their land was stolen from them and how they were paid a pittance for their many hours of hard and relentless toil. It was something he simply could not forgive and so he became involved in radical politics though it was more as an angry young man than it was a committed revolutionary.
Nonetheless he attended meetings and carried out robberies on behalf of various groups even if he was to prove more adept at escaping justice than he was at the scene of his crimes being both twice arrested and twice acquitted in Court.
His luck ran out however when in the summer of 1910, arrested once more he was convicted and sentenced to hang. The fact that no one had been killed in the robbery would see his sentence commuted to life imprisonment. Like many so confined his prison was to be his university and under the influence of the anarchist intellectual Piotr Arshinov he learned the wherewithal of grievance, its causes and who was responsible – if he wasn’t ideological when he entered prison he soon would be. 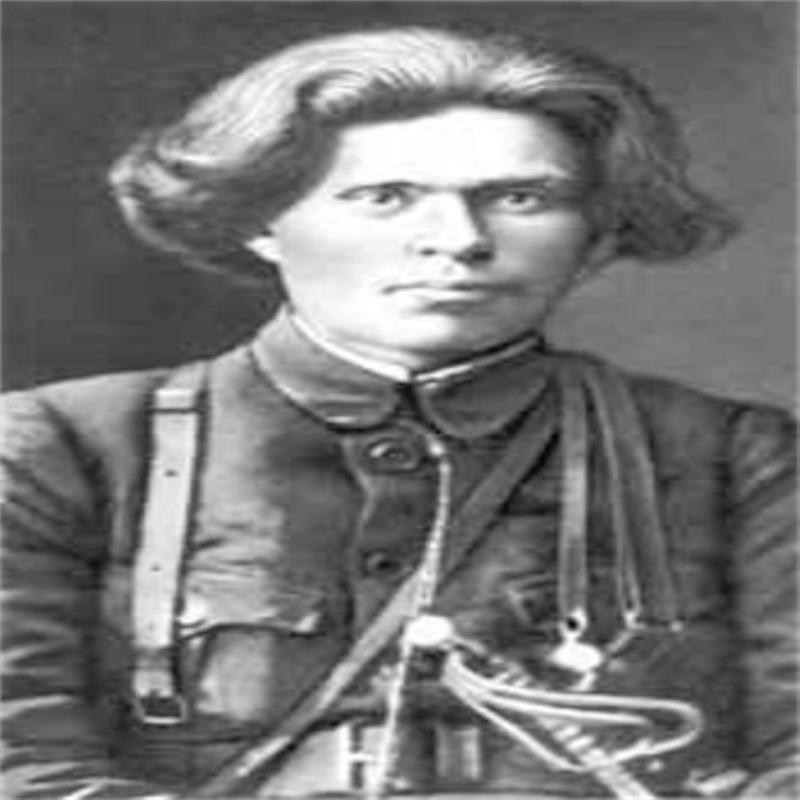 He was released from incarceration in the amnesty for prisoners that followed the revolution of February 1917, and returning to the Ukraine helped form the Peasant’s Party. Its influence was soon felt and their policy of taking land from the wealthy Kulaks and redistributing it among the poor saw its popularity grow rapidly and none was more popular than the charismatic Nestor Makhno who was soon being hailed as the Ukrainian Robin Hood.
In March 1918, after almost four years of disastrous war that had witnessed the fall of the Romanov Dynasty, Russia’s now Bolshevik Government signed the Treaty of Brest-Litovsk with Germany. It had followed torturous negotiations prolonged by subterfuge, obfuscation and delay yet despite Leon Trotsky’s best efforts it was in the end nothing short of an abject surrender and vast areas of Russian territory were ceded to the Germans including the Ukraine.
Ukrainian grain made it the bread basket not only of Russia but also much of Europe and its possession would, it was hoped, enable the Germans to circumvent the British blockade of its ports that was slowly starving its people to death. 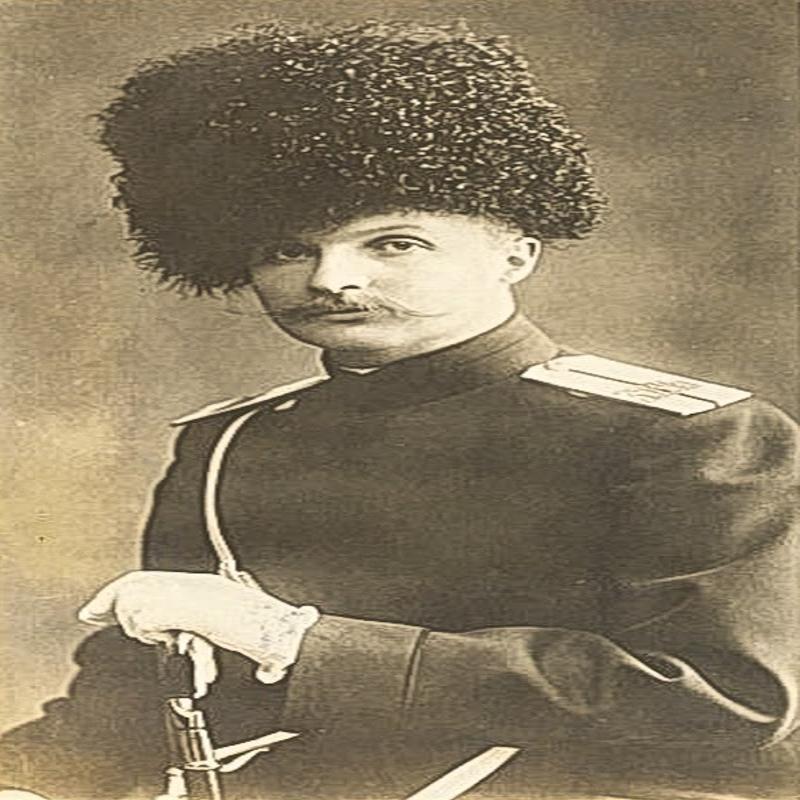 It was vital then that the harvest be gathered and transported to Germany and its Austrian ally as quickly as possible. As such, a puppet Government was hastily installed in Kiev under a former Tsarist General Pavlo Skoropadsky known as the Hetmanate but unwilling to support a former agent of imperialism backed by a foreign occupying army the people rebelled and his weak, ineffective and irredeemably corrupt regime soon lost control of the province of Yekatorinislav.
As the rebellion spread so the Hetmanate began to disintegrate. It also became clear that it was anarchist inspired and that its leader was the bold, audacious peasant from Hulyai Pole, Nestor Makhno.
Riding at the head of his Revolutionary Insurrectionary Army, the so-called Makhnovistas, beneath the large black flag of anarchy emblazoned with the skull and crossbones and embroidered with the words “Liberty or Death” and “All Land to the Peasants” his irregular cavalry swift and elusive raided deep behind enemy lines preferring ambush to pitched battle; they attacked at night, cut lines of communication, seized supplies and in the towns they occupied the landlords were dispossessed, the land redistributed, the factories collectivised and self-governing communities known as Mir established.
Greeted for the most part as heroes any dissent was nonetheless brutally suppressed.
The Hetman Skoropadsky had lost control and driven from Kiev the Central Powers ceased to support him. They would now seek to regain control by military force but they would not be the only ones. Nestor Makhno would resist them all, and he would defeat them all, for a time at least.
Victor Serge, the Bolshevik revolutionary who would later flee Stalin’s purges, wrote of him: “Nestor Makhno, boozing, swashbuckling, disorderly and idealistic proved himself a born strategist of unsurpassed ability. The soldiers under his command sometimes numbered in the hundreds at other times in the tens of thousands would steal their arms and supplies from the enemy.” 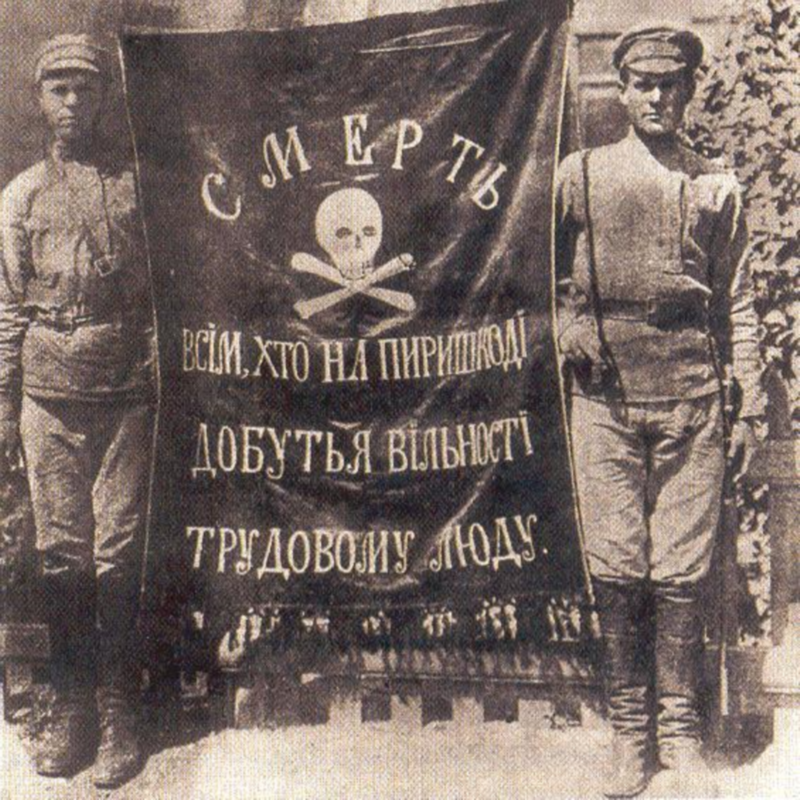 By late 1918, Makhno’s Black Army had won victories over Austro-Hungarian and Ukrainian Nationalist forces leaving him in control of vast swathes of territory. His insurrection was also entirely Ukrainian in origin and he was soon being referred to as Batko or Father of his People. In those areas he controlled he set about establishing a State founded on anarchist principles and centred on local community control backed by military force.
At its First Congress known as the Nabat, or Bell, his Anarchist State, the Makovschina, declared itself against the Bolshevik Revolution in Russia before adopting five guiding principles:
1/ All forms of Dictatorship are rejected including the Dictatorship of the Proletariat.
2/ There is to be no transition period as exists in Marxist ideology.
3/ Free communities of peasants and workers are the highest form of social justice.
4/ Education is to be founded upon the principles espoused by the anarchist intellectual Francisco Ferrer.
5/ The economy is to be based upon the free exchange of goods between rural and urban communities.
It wouldn’t last. The forces massed against them would prove too great.
On 11th November 1918, the Great War ended in Germany’s defeat long before they had the opportunity to fully exploit the gains secured in the Treaty of Brest-Litovsk. But no sooner had their forces withdrawn from Ukraine than those of the Tsarist General Anton Denikin moved in. They would soon be joined by the White Russian Army of General Piotr Wrangel. Both were already locked in mortal combat with Leon Trotsky’s Red Army – the Russian Civil War had reached Ukrainian soil.
Formed with the intention of restoring the Romanov Dynasty to power they were riven from the outset by personal ambition and factional in-fighting that prevented any strategic cooperation or effective command structure from emerging. Even so, led by experienced Tsarist commanders and supported by the Western Powers (even if more in word than deed) they remained a threat, and the one thing they could unify over was their deep hatred of and absolute opposition to the Bolshevik Government in Moscow, those cackling bloodthirsty beasts determined to sacrifice Mother Russia on the altar of their Godless Marxist ideology. 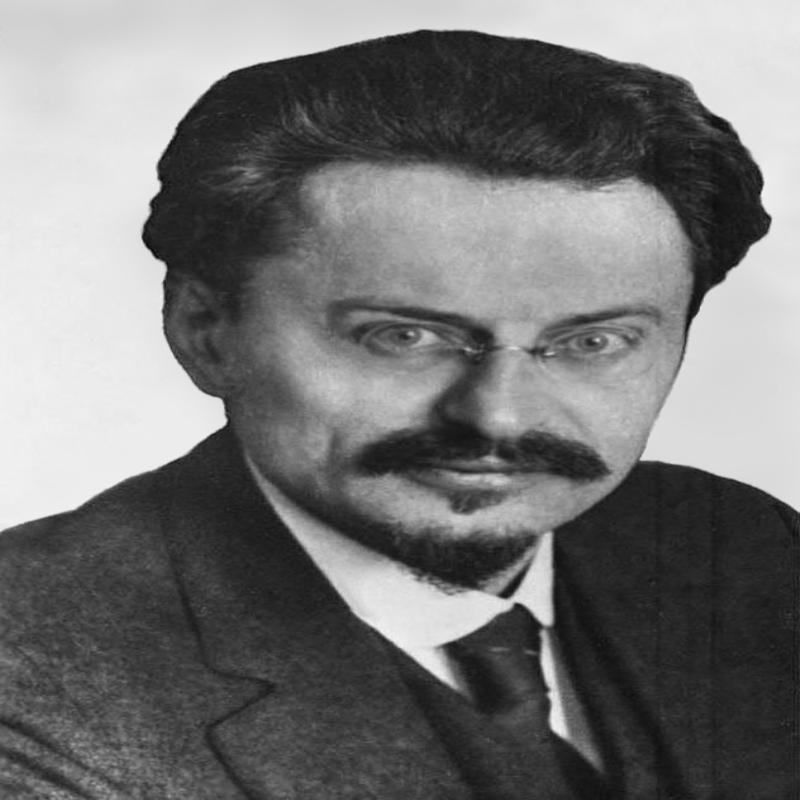 Trotsky saw anarchism as a dangerous counter-revolutionary force which if left alone would like a cancer spread across the whole of Russia. He would eradicate it in Ukraine as he would later at the Naval Base of Kronstadt and an attack by the Red Army upon Makhno’s Headquarters at Hulyai Pole saw most of his senior commanders seized and executed.
Makhno himself had evaded capture much to Trotsky’s frustration who now in a fit of pique ordered that he be shot on sight. He would later justify his actions:
“Nestor Makhno was a mixture of fanatic and adventurer. He created a cavalry of peasants who provided their own horses. They were not the downtrodden village poor that the October Revolution had first reawakened. They were the strong, well-fed peasants who were afraid of losing what they had. The anarchist ideas of Makhno corresponded with and appealed to the spirit and desires of the Kulak like nothing else could.”
Makhno fought on for almost a year often with success but with scant resources and no allies to call upon the end was inevitable. In August 1921 he fled Ukraine and with the help of the anarchist underground finally, if not without mishap, made it safely to Paris. 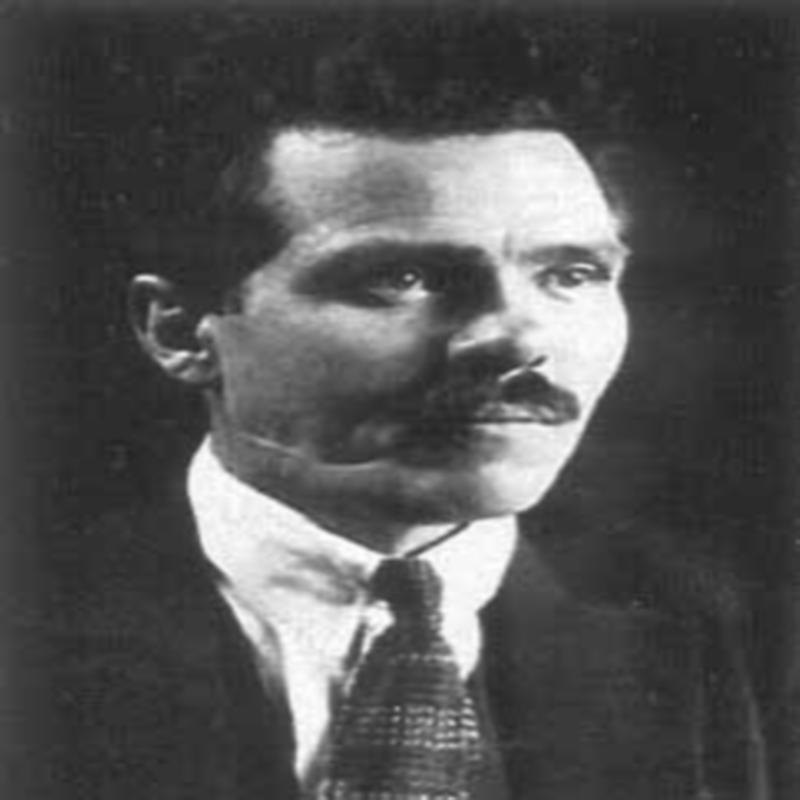 Missing the open spaces of the Ukraine he did not take kindly to city life believing it poisonous to both mind and body but there would be no way back. At least he remained prominent in anarchist circles, the hero of the hour so to speak, becoming a regular contributor to the journal Diela Truda (The Cause of Labour) but when in partnership with his old mentor Piotr Arshinov he published the controversial Organisational Platform calling upon anarchists the world over to unite in one body with a strict hierarchy and centralised command structure the other leading anarchists broke with him – his time had passed.
Ignored by those who had once praised him, Nestor Makhno, Liberator of Ukraine and the Father of his People was reduced to working as a handyman at the Paris Opera and later on the production line at Renault - he had become the forgotten revolutionary. Suffering from a tubercular condition made worse by an excess of alcohol and tobacco Nestor Makhno died on 6 June 1935 aged just 46.
Tagged as: Modern
Share this post: