Posted on 20th July 2021
Owain Glyndwr fought against the odds and lost. Yet even in defeat he never surrendered, evaded capture and never paid homage. He is the great hero of Welsh resistance to English rule.
Glyndwr was a Prince of Wales but he was not the Prince of Wales, that title had been reserved for the first born son of the King of England ever since Edward I's effective colonisation of Wales in 1283.
Edward who had done his best to strip the Welsh of their culture and suppress their language now ringed them in with a series of castles as a constant reminder they were a ruled people whenever since the Welsh Princes had been obliged to pay homage to their English Lord and Master.
Wales had never been a sovereign nation but rather a series of small fiercely independent principalities. Yet that independence had for long time been the stuff of dreams kept alive only in ballad, verse and song.

Owain Glydwr was to try and make that dream a reality by taking up arms to lead the last great Welsh Rebellion against English rule.
Yet it does not appear he was a natural rebel; he had been educated in England and studied to be a lawyer at the Inns of Court in Westminster. He was an attendant to the Duke of Arundel, a regular presence at the Royal Court and had fought loyally for the English King in his campaign against the Scots. Neither was he a particularly ambitious man and for ten years he quietly ran his estates in Wales avoiding politics and affairs of state. So there was little indication in his early life that he was to become the fulcrum of the greatest ever campaign for Welsh independence.
On 29 September 1499, King Richard II was deposed by Henry Bolingbroke and forced to abdicate. Glyndwr, who was seen to be Richard's man, was not entirely trusted by Bolingbroke especially as Wales was the one part of the country where the deposed King still remained popular.
But the soon to be crowned Henry IV with his reign yet to be validated believing that discretion was the better part of valour did not move against Wales. Instead, the rebellion was to be sparked by a long running feud between Glydwr and his English neighbours the Grey's of Ruthin.
In 1400, Glyndwr brought a case in the English Parliament against Sir Reginald Grey for the seizure of some of his land. Grey, who had the ear of the King, told him that Glyndwr had ignored his royal command to provide troops for a military campaign in Scotland, when he had in fact had failed to inform Glyndwr of the command. Henry, already suspicious of Glyndwr because of his previous loyal service to King Richard, was inclined to believe Grey and so ruled against the Welshman.
A little later the King ordered him to attend Court and explain himself. Believing he was about to be charged with treason Glyndwr refused and instead returned to his estates. It wasn’t long before the rift between the King and Glyndwr became public knowledge and confrontation loomed.
When a loyal official of the since murdered Richard II was executed in the border town of Chester what began as a localised protest soon spread becoming a Wales wide rebellion against English rule. But it was one without a leader. When on 16 September 1400, the already estranged Glyndwr was approached to lead it he readily agreed.
He was in many respects an obvious man for the rebels to turn to, he was a leading Welsh noble, an experienced military commander, charismatic and personally popular.
No friend of this particular English King many who saw him as a usurper now flocked to Glyndwr’s banner and he was to lead in a dazzling military campaign as the great fortresses of Wales built by Edward I fell one by one culminating in the capture of the supposedly impregnable Harlech Castle.
By the spring of 1401, he had overrun north Wales and captured the towns of Flint, Ruthin, Oswestry, and Welshpool. 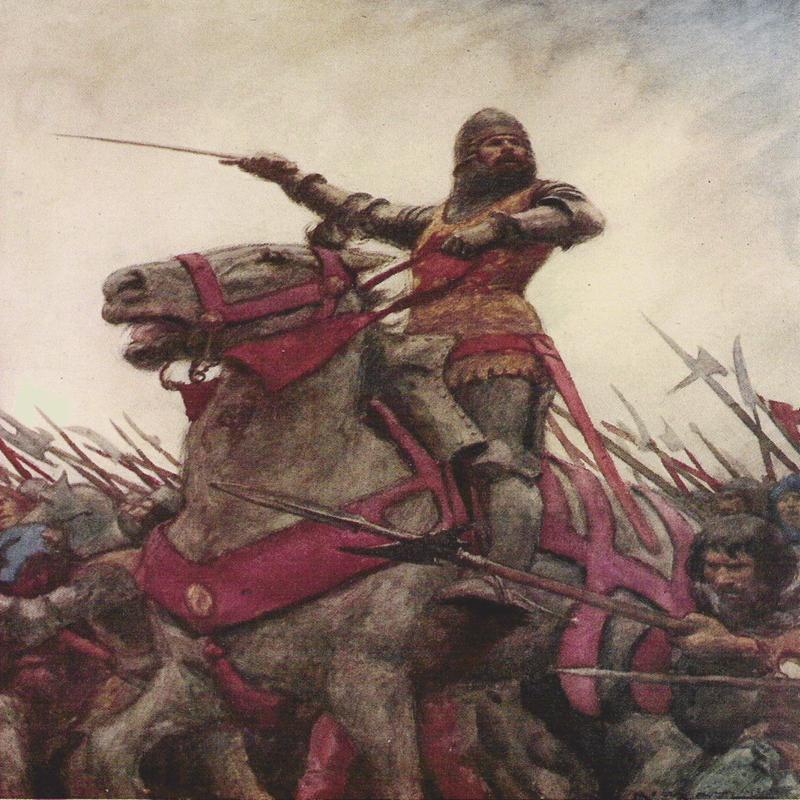 In June, he defeated an English army at the Battle of Mynydd Hyddgen and by the winter he had captured his old enemy Lord Grey and the English Commander in Wales, Lord Mortimer.
Glyndwr, who was by no means a cruel man and certainly not by the standards of his day, treated Grey well and was to later ransom him; Lord Mortimer he had invited to live in his household and later married off to his daughter.
Having conquered north Wales, Glydwr now turned his attentions south where he allied with the powerful Twdr family, who would later become the Tudors and the ruling dynasty of England. He was by now raiding at will and the English had no answer to him.
In response in 1402, the English Parliament passed a series of penal anti-Welsh Laws including a particularly harsh Poor Law, in an attempt to suppress the rebellion but with no forces available to impose the restrictions they proved ineffective. The truth was the English presence in Wales had been reduced to a few small garrisons hiding in fortified buildings too terrified to show themselves.
Indeed, the anti-Welsh Laws only served to infuriate the natives even further as Welsh students left English Universities to return home, and Welsh workers downed tools to join the rebellion.
As the rebellion grew so did Glyndwr's ambitions and he was by now intriguing with Sir Henry Percy (Shakespeare’s Hotspur) and the Duke of Northumberland to depose Henry IV, or at least create a unified separate Kingdom of Wales and northern England. His plans suffered a setback when on 21 September 1403, Percy was killed at the Battle of Shrewsbury. 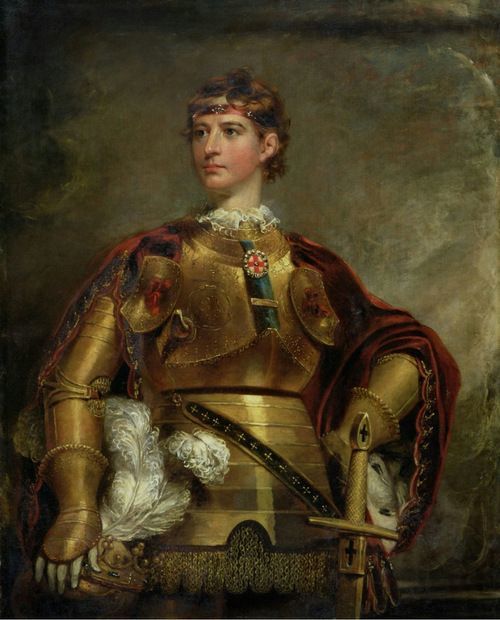 Also at Shrewsbury that day was the sixteen year old Prince Henry (the future Henry V and victor at Agincourt) who was almost killed when an arrow struck him in the face disfiguring him for life. As a result, all future portraits would show him only in profile.
As his ageing father sickened the young Henry would effectively take control of the English army opposing Glyndwr.
Despite the defeat of his allies at Shrewsbury, Glyndwr remained undeterred and was already negotiating with the Irish and the French for support. The Irish negotiations came to nothing but his emissaries in France were more successful and in 1405 a treaty was signed and a little later in what became known as – The Year of the French – an army landed at Milford Haven while at the same time raiding parties attacked and pillaged Dartmouth, Plymouth and the Isle of Wight.
With his new ally on side and confident of victory, Glyndwr now went some way to forming a Welsh Government. He appointed Magistrates, established an independent Welsh Church and formally declared for an independent Welsh State. He had already been crowned Prince of Wales and now to force the issue he took the war into England itself.
As preparations were being made for the invasion in the spring of 1405, a Welsh army went down to a catastrophic defeat at the Battle of Pwll Melyn in which Glyndwr's son Gruffud was killed. This followed hard on the heels of an earlier defeat at nearby Grosmont. Nevertheless, the invasion would go ahead.
In June 1405, the Welsh and English armies faced each other at Woodbury Hill in Worcestershire. For eight days they glared and hurled abuse at each other but refused to fight. Earlier defeats had slowed the momentum of Glyndwr's rebellion and he was reluctant to risk another so soon. The English, cowed by his reputation as a battlefield commander, also remained circumspect.
The French witnessing this now began to doubt Glyndwr’s commitment and deciding that the tide may have turned in favour of the English made it clear that they would stand aside in any fight. It seemed that the peace party at the French Court in Paris who had little enthusiasm for war with England had prevailed. By 1406, they had gone.
Glyndwr, aware that without the support of powerful allies his campaign for Welsh independence could not be fought on English soil decided to retreat with his army back to Wales.
Meanwhile, Prince Henry had adopted a new strategy to bring the Welsh rebels to heel. He would no longer seek a single decisive battlefield victory but would use greater English manpower and resources to squeeze the life out of the rebellion. Welsh ports were blockaded, an economic embargo introduced, and in the spring of 1406 an English army landed at Anglesey.
Glyndwr would launch a series of punitive raids deep into the heart of England in an attempt to relieve the pressure on his forces in Wales but each time he did so he left himself more vulnerable at home. His frequent absence was deeply felt and without his presence the rebellion lost traction and began to subside as one by one those Castles that had been taken from the English earlier in the campaign were recaptured. 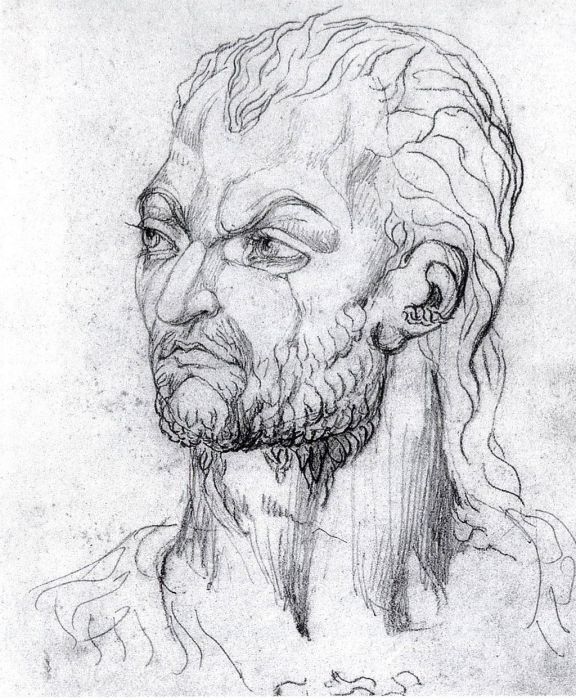 Glyndwr was to continue his rebellion for another four years and though he was no longer able to put substantial forces into the field he was to prove himself an adept guerrilla fighter. Even so, the much-cherished dream of an independent Wales free of the English was beginning to fade.
In 1410, he made one last effort to revive the spirit of earlier years by invading Shropshire but he was unable to sustain the campaign. Two years later he ambushed and defeated an English army at Brecon. It was to be a final victory, a heroic farewell, for not long after he disappeared never to be seen again.
By the following year Prince Henry had succeeded his father as King becoming Henry V and he now adopted a policy of inducement buying off those Welsh nobles who had previously supported Glyndwr - the rebellion was as good as over.
Owain Glyndwr’s sudden disappearance is not easily explained and what became of him remains a mystery. Had he been killed it would most certainly have been made public, had he been captured the English no doubt would wanted to have made an example of him as they had previously William Wallace.
Did he flee abroad? Did he become a monk and live quietly in cloisters? Did he dwell in secret with relatives? Or did he, as some have suggested, reinvent himself as the Welsh poet and balladeer Sion Cent or Jack Kent?
The English, who certainly wanted him dead, circulated the rumour that he had died in Herefordshire in 1417 but that his burial place had been kept secret.
No one knows for sure.
Tagged as: Ancient & Medieval
Share this post: