Prisoners of the Japanese

Posted on 19th July 2021
On 7 December, 1941, a day that President Franklin Delano Roosevelt said would ‘live in infamy’ planes of the Japanese Empire attacked the United States Naval Base at Pearl Harbour. The following day Japanese forces landed on the Malayan Peninsular and began an advance upon Singapore. In very short order they were also to invade Burma, Hong Kong, Borneo, the Dutch East Indies and numerous Pacific Islands - they were to sweep all before them.
On Christmas Day the British surrendered Hong Kong and 1,700 Canadian troops were to become some of the first prisoners of the Japanese - little could they have imagined the nightmare that lay ahead.
In total some 140,000 European and American soldiers fell into the hands of the Japanese Army, mostly in the first few months of the war. Of these 35,000 were to die in captivity where they were starved, beaten, executed, and worked to death.
Much like the Holocaust remains a stain upon Germany so does the deliberate maltreatment of prisoners and local civilian populations alike upon Japan who unlike the former still refuse to fully accept their guilt and responsibility. 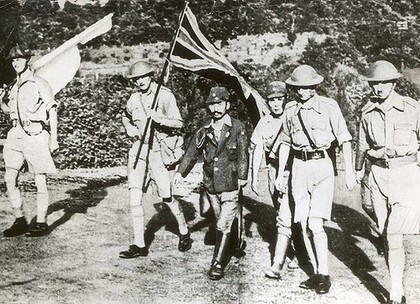 On 15 February 1942, Lieutenant-General Arthur Percival surrendered the city of Singapore despite having received express orders from the British Prime Minister Winston Churchill not to do so: "There must be no thought of sparing the troops or the civilian population, commanders and senior officers should die with their troops. The honour of the British Empire and the British Army is at stake."
Percival chose to ignore the order and after a brief meeting under a flag of truce at the Toyota factory on the outskirts of the city, he surrendered 130,000 British, Commonwealth, and Malay troops to a Japanese army less than half its size. Moreover, it was an army that was short on ammunition and exhausted from its rapid advance down the Malay Peninsula.
Of those who surrendered 50,000 were British, 40,000 Indian, 17,000 Australian, and the rest Native Malay troops. Many had only arrived the day before and had not even fired a shot in anger.
The British had lost only 2,000 men killed and 5,000 wounded in the fighting and the Japanese Commander General Tomoyuki Yamashita who had called General Percival’s bluff could hardly believe his luck.
The following day the entire British Army was made to line the streets and salute the Japanese flag as Yamashita and his entourage drove in triumph through the city. 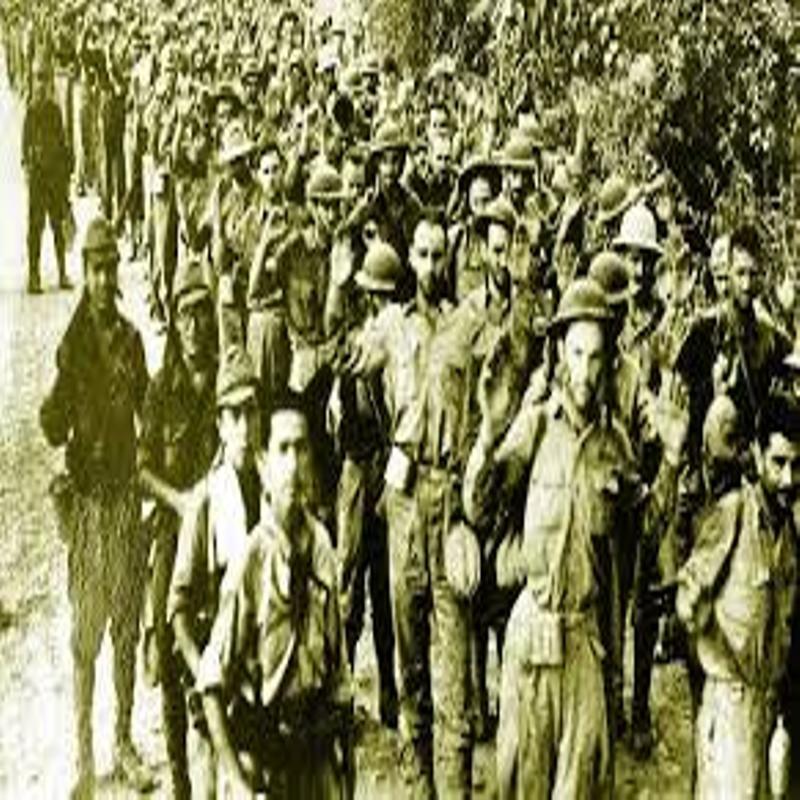 For the Japanese to see so many fit young men taller and physically stronger than they were in a state of such abject surrender was shameful.
The whole event was captured on newsreel and shown throughout Japanese controlled south-east Asia. As if to emphasise who was now in control the following day British Officers were provided with brooms and forced to sweep the streets of the city clean as the people looked on. It was their policy to humiliate the former colonial rulers in the eyes of the local populations.
The Fall of Singapore, the greatest single capitulation in British military history was a bitter and irreversible blow to British prestige in its Dominions and marked the beginning of the end of the Empire.
Less than two months later on 9 April, 1942, General Edward King surrendered the American garrison at Bataan after a bitterly fought 90 day siege, 11,796 American and 67,000 Filipino troops were taken into captivity. 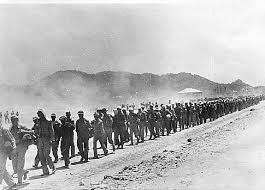 First they were stripped of all their belongings and then, already half-starved and diseased, they were forced to march 61 miles in extreme heat to their place of incarceration at Camp O'Donnell.
Denied food and water they began to drop like flies and those who fell by the wayside were either left to die or bayoneted to death. Any prisoner who stopped to help one of his comrades in distress was likely to be clubbed and beaten or simply killed out of hand.
In what became known as the Bataan Death March 650 American and 10,000 Filipino troops died.
Prior to his surrender General King had asked the Japanese Commander General Masaharu Homma if his troops would be well treated and had received the reply: "Do you think we are barbarians?" Six years later General Homma would be executed for war crimes as indeed would be General Yamashita - the Tiger of Singapore. 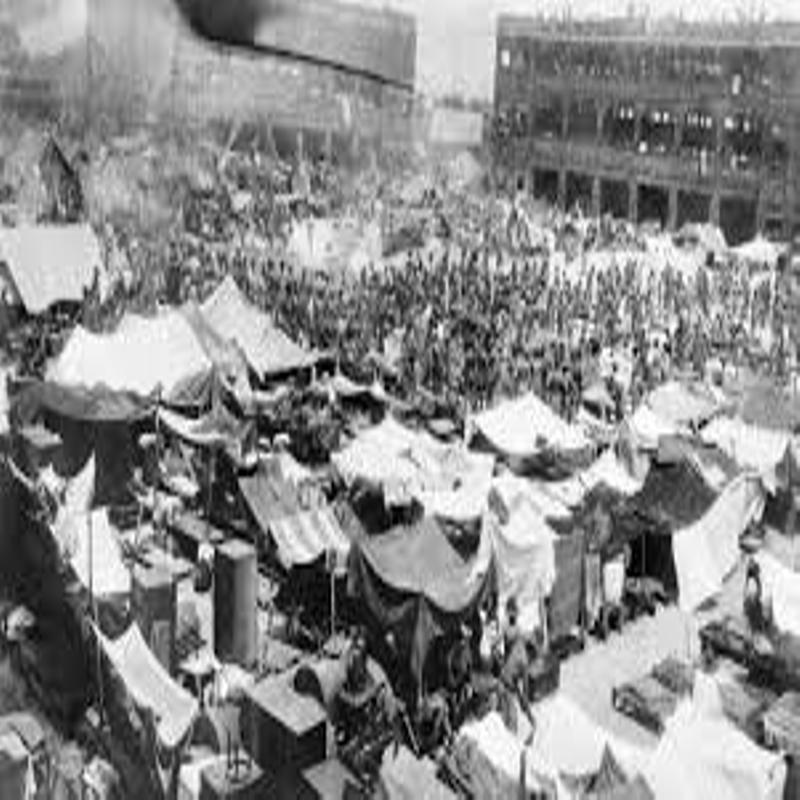 The British and Australian troops captured at Singapore were held at Changi Prison on the Island. The Camp was administered by the prisoners themselves and guarded by soldiers of the anti-British Indian National Army recruited from among those Indian troops taken at Singapore.
The Camp was used as a prisoner distribution centre from where captives were sent to work on the Japanese mainland or to labour on the Burma Railway and it was thought of by many of the prisoners as a safe haven where they could exist, if barely, unmolested by their Japanese captors.
Many thousands of British, Australian, and Dutch prisoners were taken from Changi Prison to work on the Burma Railway where forced to labour 16 hours a day in intolerable heat on a handful of rice and subject to constant beatings they completed the 421 km railway in just over 12 months. It was to cost the lives of 6,500 British, 2,800 Dutch, and 2,700 Australian lives. Perhaps as many as 80,000 forced native labourers also died.
In the Camps the prisoners were themselves forced to build the British at least maintained a modicum of military discipline; Officers were saluted and regular parades held but it was difficult thing to sustain.
The men were exhausted, dehydrated and suffering from dysentery, beri-beri and a myriad of other diseases. All suffered from malnutrition and the Army Doctors worked hard to keep men alive but denied medical supplies there was little they could do. This was particularly the case with malaria which remained the biggest killer but could easily have been combated with quinine. Repeated requests were made for it but the Japanese always denied that they had any though it was possible to purchase it on the black market. At the end of the war ample supplies of the drug were found in most of the liberated prison camps.
Denied the required drugs it was impossible to prevent death in the camps becoming a daily occurrence. The Japanese, who were not signatories to the Geneva Convention also refused to hand over Red Cross Parcels and so with no other means of supplementing their meagre rations the prisoners grew vegetables where they could.
Given that their staple diet was rice served as a bland thin soup without seasoning known as lugao which many prisoners could not bring themselves to eat or vomited up soon after doing so, the vegetable yield became essential to staving off starvation. Even so, they could never grow enough.
At Daily Roll Call the prisoners would have to shout out their prison number in Japanese and respond to shouted orders immediately and without hesitation. Not doing so would result in a beating.
The Prison Camps were not securely guarded – isolation and the intolerable climate along with the effects of malnutrition and disease had made it largely unnecessary. 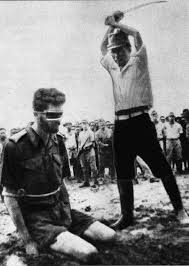